I have an awful lot of rocks and stones in my garden, and in clearing out the worst of them from the flower beds, it's difficult not to end up with some kind of wall. And I have a lot of rocks that seem to have been created by magic during the renovation project. But I need a proper wall to separate an area of garden from an area of wild box bushes that are protected by law, and that I'm therefore not allowed to touch.

So I have been building a dry stone wall, slowly, when I don't have more pressing projects, over a period of some months so far. Over the last several days I have been working on it. It takes a lot of rocks.

My wall has a cross-section of about a metre squared, so it takes about a metre cubed of rocks to make a metre length of wall. That's about 15 wheelbarrow loads, and of course the rocks are all the other side of the garden. They're heavy. It funny how for years I have looked at dry stone walls, and thought nothing of them. I am starting to appreciate just how much effort they represent.

To build a good wall you need the biggest, heaviest rocks on the bottom. Their positioning defines where the wall goes. The rocks should get steadily smaller as you go up, but the smallest rocks (or bits of concrete, rubble, etc) go in the middle. The smaller rocks slip into the gaps between the bigger ones and prevent them from moving, so giving strength to the wall.

And as I work, two poems come to mind. Goodness knows why I made even the small effort needed to learn this one when I was younger, but I think I liked the nonsense of it, especially of using dry stone wall as a verb:

And also of the poem "Mending Wall" by Robert Frost. It starts "Something there is that doesn't love a wall" and it makes me wonder what will happen to this wall over the years of its life. 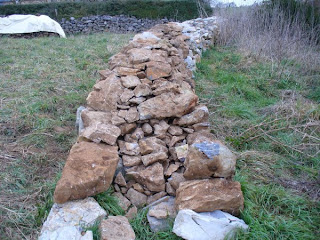 You can see the biggest rocks at the bottom edges, the smaller ones in the middle 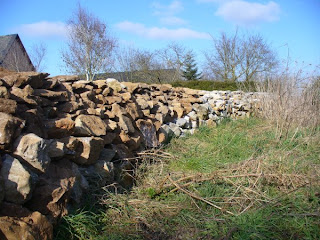 The wall so far. The darker stones in the foreground are the ones I have added recently. Unlike the more distant ones, they haven't been washed bright by the rain yet.
Posted by Mark In Mayenne at 15:02 1 comment: Links to this post

"Spring is sprung, the grass is ris,
I wonder where da boidies is?
Dey say de boid is on da wing,
But dat's absoid,
I always hoid,
Da wing is on da dickie boid"

There seems to be as many forms of this bit of doggerel as there are postings of it on the web, but this is the version I learnt as a boy. The spelling is supposed to represent a bronx accent.

It's a bit too early to say that Spring is really here: another cold snap is very possible. But here to help us on our way are some cheeky crocus, smiling and waving as we pass, defying the cold and winds, to cheer us up. 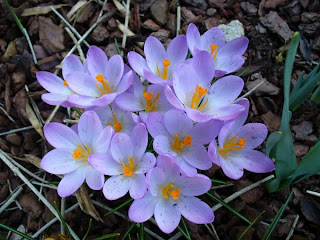 You can't help but smile 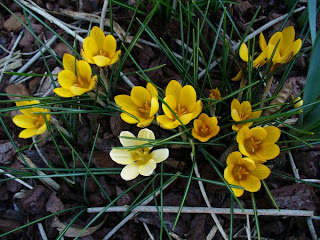 Some more, just for fun!
Posted by Mark In Mayenne at 09:18 No comments: Links to this post

When I was in my early teens, there was, not far from where I lived, an area of wasteland left over from a demolished council estate. Called Stow Estate, it was the place to go to hunt for slow-worms. Now there's a misnomer if ever there was one. You'd find them under bits of corrugated iron warmed by the sun. You'd lift it up, and stare at the grass underneath. And stare and stare, and you would never see the slow-worm until it moved. Then, if you were quick enough you could grab it just behind the head, but if you missed it, it was gone, and you had missed your chance. I used to bring them home and release them into the garden. They stayed in the compost heap and ate slugs and snails.

Today I found a handsome green lizard in my garden under some hardboard. Since it's January, I think he must be hibernating. I disturbed him just enough to take this photo, and then put the hardboard back into place. I can always tidy it up later, when the weather is warm enough to be sure that he will have gone his way.

Last year I was demolishing a small dry stone wall. There behing one of the stones was a grass snake. Unfortunately, as I demolished the wall, he kept moving along it, so I kept uncovering him a bit farther along. Since a snake can come to harm behind a wall in the process of being dismantled, the next time I saw him I tried poking him to get him to go away. He hissed at me. Quietly. But it was menacing in such a way that my hair stood on end. Must be some racial memory of dangerous snakes. But at least, he disappeared straight after.

Incidentally, the french word for lizard is lézard, but they also have a verb "lézarder, to lizard", used informally, which means to lie around basking in the sun. 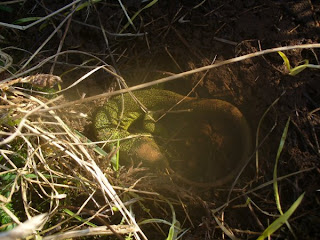 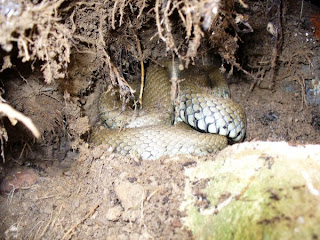 My grass snake
Posted by Mark In Mayenne at 09:04 No comments: Links to this post

A sharp frost is followed by a still, cloudless morning. Ideal for getting into the garden and doing some physical work as the sun soothes the warmth back into the soil.

Winter time doesn't present much in the way of opportunity to practice the tender arts of plant care so most of my activity is about moving lots of heavy stuff from where it is, to where I need it. Today is no exception, and I am moving some of a big pile of topsoil, left over from the renovations, to a new flower bed and shrubbery I am creating around the back of the lodge.

After this, I can put the first plants in: A Hebe, some Lavender, a Viburnum and a box that I will let grow as a shrub, for some evergreen colour. To follow: A Mahonia Aquifolium. 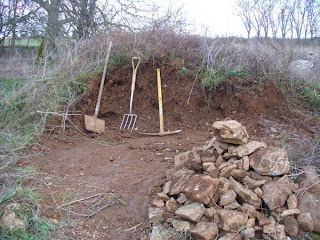 I am about 1/4 through the heap of soil; the pile of stones in the foreground being removed as I go. 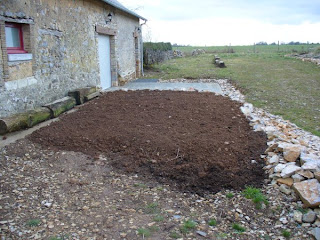 The result: A nice bed, ready for planting.
Posted by Mark In Mayenne at 03:10 1 comment: Links to this post

The Hazel nut trees in my garden are just dripping with catkins. Great, and for two reasons: they look spectacular, and they promise a good crop of nuts for the red quirrels in the area.

I would like to offer you a photo of one of my own squirrels, but I haven't managed it yet. The best opportunity was last year as I noticed an industrious individual come bounce-bounce-bouncing up the lawn, to disappear behind the house, and return a few minutes later with a nut in his mouth. This happened three times, and on the fourth, after he had disappered behind the house, I was ready with my camera. Did he come back? Not a chance!

The French word for catkin is chaton, which also means kitten. I wonder if catkin is an old word for kitten in English? If you know, please let me know. 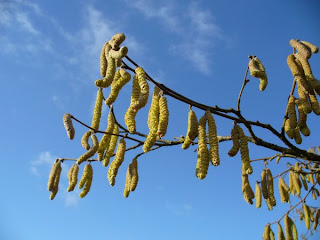 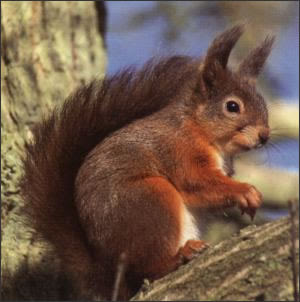 Someone else's squirrel
Posted by Mark In Mayenne at 06:32 No comments: Links to this post

A Fanfare for the Harmonie

It's Friday night and that means practice night for the wind band known as the Harmonie. I always look forward.

The Harmonie is a collection of amateur players of wide-ranging ages and levels, and our conductor uses his magic to meld us into an ensemble, playing several concerts a year. We play at civic functions too; remembrance days, marriages, religious services. The group is sponsored by the town, which means that membership fees are low, uniforms are provided, and the Harmonie will even buy you an instrument if needs be. And I have to say that my welcome into this happy band was one of the most friendly that I received in France.

New repertoire tonight: a modern piece called "Black Heat", lots of 4/4 and 7/8 time, good for my counting discipline; a medieval Gaillarde that keeps switching between 3/4 and 3/2; and Solas Ané (Gaelic: Yesterday's Joy), a beautiful haunting Irish-sounding piece, in which you can actually hear the flutes (a rare occurrence!) By Samuel R Hazo

And it is Claude's birthday coming up, so, as is the tradition, he supplies some wine for after, some cake (lemon), and he gets to choose the last piece we play - The Thunder and Lightning polka by Strauss. Lovely end to the week

Did you know that the French word fanfare means brass band? Cute! I love the way our languages have combined and evolved.

Oh, and I learnt a new word today, "chiant". Not for polite company, it describes something both difficult and boring (like a section of the flute part!) The verb apparently is "chier" which means "to shit", hence the unsuitability for posh usage. 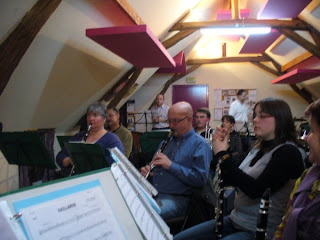 View from my seat
Posted by Mark In Mayenne at 07:19 No comments: Links to this post