Our last visit was to the Arboretum de Balaine.  It's a bit farther South from where we were staying, so not strictly on the way home, but we incorporated the visit into our journey back.

It's a very different garden from that at Apremont, with a feel much closer to a big (English-style) public park than a private garden.  The route around the garden is signposted, and visitors are expected to follow a specific path that takes in all of the important features.   The ways are fairly narrow so perhaps this constraint is for when the garden is busy, although we were the only visitors that morning, as far as we could tell.

An average tour around the grounds takes about two hours, and we found it very relaxing. 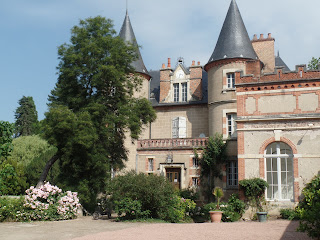 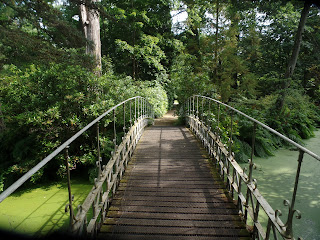 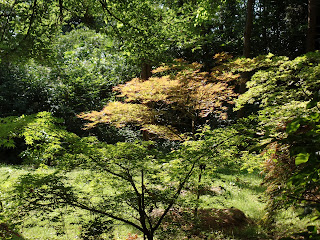 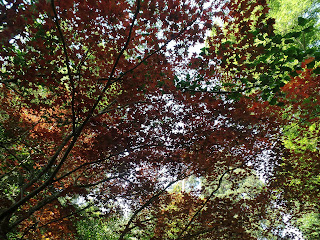 Definitely worth the detour.

We did two cycle rides on our short break, both on relatively flat terrain along waterways.  We started both of them from the big lock on the canal that runs alongside the Loire, marked by the pointer on the map below.  There is a hotel there (The Auberge du Pont Canal) that serves seriously strong coffee to get you going in the morning, and after one of these, we set off.

The first ride was northwards along the Loire as far as Marseilles-les-Aubigny, and the second one was eastwards along the canal that parallels the Loire, as far as Chevenon.  Each one was about 17Km each way.   Google maps seems to scale the map according to the size of your reading device - you might need to enlarge it.


I find it quite impressive how well-maintained these cycle tracks are - the surface is smooth, not quite as smooth as a metalled road, but pretty good, and well signposted.

We passed a very quaint looking restaurant in Aubigny, but unfortunately it was shut.  I hope that the bowl of cherries they left out was intended as an apology; the ones I tried were very nice.   We rode on and had lunch in the nearby marina on the canal.  I particularly liked the sculpture of the mariner at the wheel of a boat. 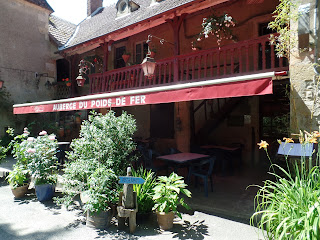 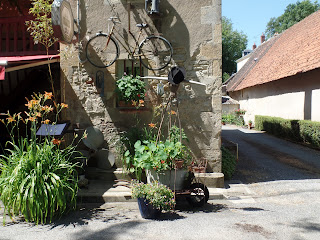 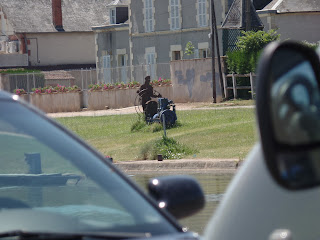 There is a canal that runs alongside the Loire, called the Canal Latéral la Loire, and it crosses the river Allier not far from Km0 on the Loire à Vélo trail, via an aqueduct.

The aqueduct is quite high, and gives spectacular views over the surrounding countryside, and down to the Allier below.   You can walk along it; cyclists are asked to dismount, although not everyone did.  At the western end there is a deep lock, the deepest I have seen, to take boats down to the next level. 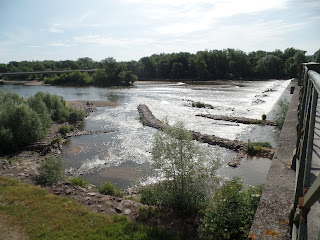 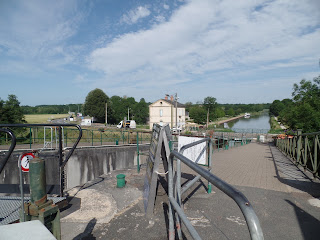 I liked the decorative lions on the handrails along the aqueduct, and also the flower boxes on the beams of the lock gates.  Nice touches, both of them. 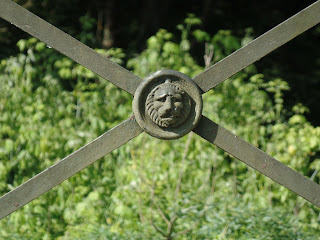 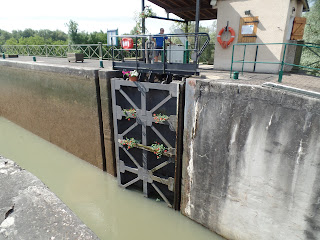 The river below was glistening in the morning sun. 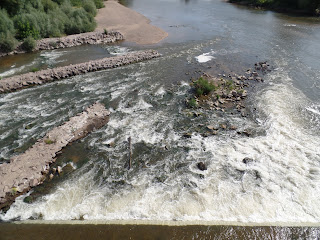 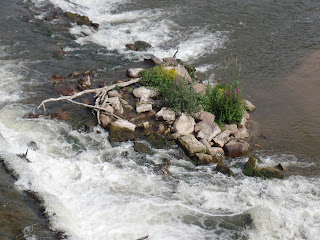 We took a few days' break to check out our bikes, and to ride along a bit of the cycle path that has been created along the Loire valley ("La Loire à Vélo").  This is in fact part of a route that runs from the Black Sea to the Atlantic coast; the Loire bit of it is 800km long.  That should be enough to keep us going for a while.

We decided to start from kilometer zero of the "Loire à Vélo".  This is not at the source of the Loire, but is near Nevers where the Loire is joined by a tributary nearly as big; the Allier.  Looking at a map, the Allier upstream of where it joins the Loire is about as long as the Loire upstream of that point, but I guess it must be slightly smaller.

On the way, however we stopped off near our destination, at the Parc Floral at Apremont-sur-Allier.  It really is a remarkable garden.  Just about every vista is picture-postcard quality, and it is superbly maintained.  It was created by a guy who just wanted to bring some people into the village, and was opened to the public about 40 years ago.  He bought up the chateau and a few houses, had them refurbished and planted the gardens. A fine job.  Here's some pics, although they can't really do it justice. 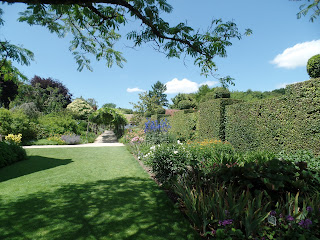 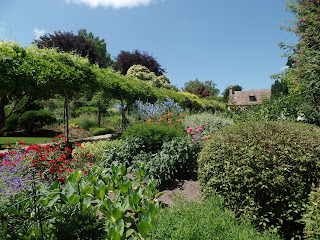 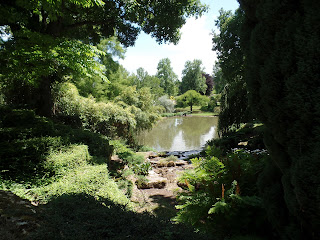 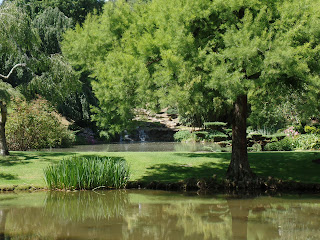 You will have gathered that there are some water features, and that inevitably means frogs.  They hopped into the water with a small splash as we walked by.  I managed to sneak up on this little guy who seemed braver than the rest.  Or stupider. 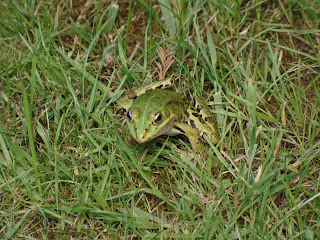 And here's something I hadn't seen before:  A wide area watering system.  Water arrives along the hosepipe at the bottom right, goes around the hose reel a few times, and then shoots off down the straight black pipe to the right where it is fed into a sprinkler jet that waters a large circular area.  The sprinkler jet is on wheels, and the water movement powers a mechanism on the hose reel that slowly reels in the hose.  So it covers a very large area, given time.  Neat. 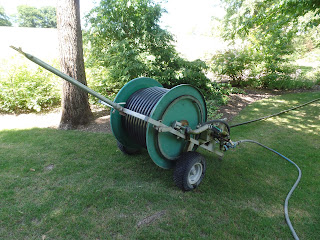 We looked at this mill the other day, it's about 12 minutes from the town of Mayenne, out in the sticks.   Not for us, but the location is wonderful.  The mill wheel is still present, but needs repair, and is mounted on a modern metal shaft and what I take to be a ball race.

Here's a link to the ad if you're interested. 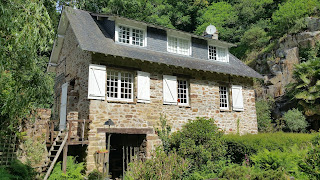 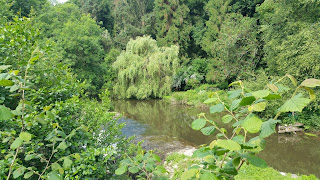 In Britain, you have to get your car tested every year; an MoT test.  The Ministry of Transport no longer exists, but the test they inaugurated for cars lives on.  In France cars have to have a contrôl technique once every two years, and once every ten years the test is a more comprehensive one.

Our Renault Espace has just had its ten-year contrôl technique, and it passed, which is a bit of a relief.  It is a diesel, chosen for the fuel economy, and because the government (French) seemed to think they were a good idea, reflected in the lower price of diesel fuel.  The Renault garage offered a free "pre-contrôl" test, which sounded like a good idea, and when we came to pick the car up, we discovered they had sorted the test with the test centre up the road.  Result. 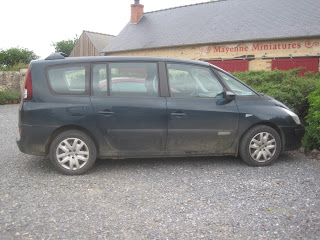 Frankly, we don't drive it much, but we are in the peculiar position of it being essential to operating the gîte.  We bought it for its seating capacity (6 people + driver) and its carrying capacity (you can take the seats out and fill it with shopping).  The seating capacity was for transporting gîte customers to and from railway stations and airports, and the carrying capacity was for all the food we have to buy to cater for guests.  Food for a gîte full of people for a long weekend, including two chilled hampers, fills it up.  As it turns out we have used it about twice for ferrying people, but use it for carrying food every time we have guests in the gîte (say, 20 times per year).

As a consequence, although the car is ten years old, it has only 55,000 Km on the clock; as a diesel, it's barely run in.  I have been assuming that it will see me (us) out, that I will drive it until either I can't drive or it can't be driven any more, and that will be the end of it.

In the mean time, diesel fuel is dropping out of favour.  A manufacturer been found to be cheating on the pollution figures, others are suspected, and all of a sudden, news coverage is all about what nasty stuff diesel smoke is.  People are assuming that diesels will be banned at some time, which will mean that I will have to buy a new car.  My careful considerations of future utility have been thrown out of the window by changes in government thinking.  It's by no means clear what I should replace it with, should the need arise: electric? hybrid? petrol?  Perhaps, if we're not running the gîte, we won't need it at all.  That might be the best solution.