It's a characteristic of French gardens that they tend to be very manicured, in contrast to the traditional English garden where plants are left freer to express their natural shapes.   The difference applies also to municipal plantings, roadside decoration and the like.

Last week there was an enormous crashing and crunching sound coming from the other side of the valley, and I went to take a look.  The local council workers were pruning the trees; the noise was coming from the chainsaws and the wood shredder.

The result, once the trees grow out, is not unattractive, but I can't help feeling they look a bit stunted right now. 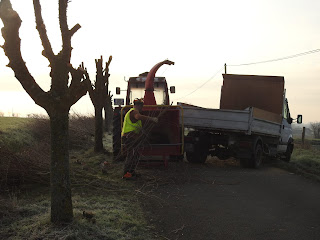 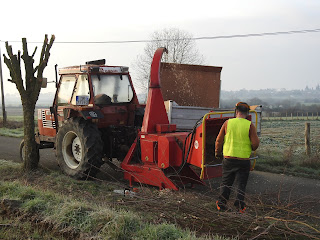 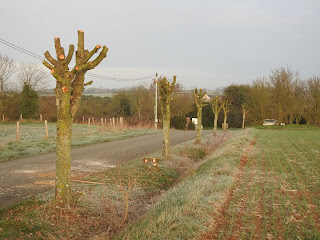 How good can a man get?

Behold!  My new shaving system.  I think it might well be the very best a man can possibly get. 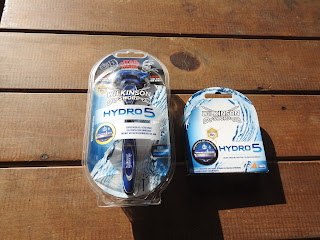 The original purpose of this blog was to note some of the aspects of settling in France, and the differences between here and England.  We've been in France for getting on twelve years now, and as France becomes more familiar, and England more distant, this job gets more difficult.

This weekend I spent doing something that, although infrequent, is now familiar, but is different from anything I experienced in England.  It concerns playing in a concert.

There is a small wind band in Ste Suzanne, (French: une Harmonie).  We practice on Friday evenings, and put on concerts a few times per year.  One of our former players moved to work near Nantes and plays with the Harmonie there, and she proposed the idea of playing concerts with the two bands together.   So we have been practicing up some tunes for the end-of-year presentations, and the Nantes musicians (actually from St Herblain, a suburb of Nantes) have been practicing the same ones with a view to joining forces in joint concerts. The common subject of the pieces was dragons.

We gave the first joint concert in December last year at Ste Suzanne.  The Herblainais musicians came up by coach and played with us in two concerts on a Saturday evening and Sunday afternoon.  We put up some of them in our gîte over the Saurday night; others were housed by the other musicians' families in the area.

Last weekend it was our turn to visit them, and we bundled into a coach, travelled down and gave our concert.  We were greeted by the Herblainais musicians who laid on snacks before the general rehearsal, and a buffet meal after it.  We played together to an 800 seat hall, full to capacity, and the concert was a grand success.   The evening finished with dessert, again provided the the hosts.

We stayed overnight.  The coach driver and I were put up by Laure, a clarinetist, at her house with her husband and two young girls.  On the Sunday morning she led us on a pleasant walk through the countryside around her house, and we ended the event at a communal lunch for all the musicians, in a room off the concert hall.

It was clear that everyone had made an effort to be as welcoming as possible.  Most of the food was home-made - meat pies, tapinade on fresh bread, and so on.  People proudly delivered their specialities - there was a spectacularly good cheescake, for example, chocolate pie, brownies, cookies, savoury cakes, etc.  Someone decorated special iced gateau to celebrate the Ste Suzanne and Herblainais joint venture.

I suppose the point is that everyone made that special effort.  They didn't have to decorate the cakes like that, Laure didn't have to take us on a walk, but they all really wanted us to have a good time.  It's always a pleasure to meet welcoming people. 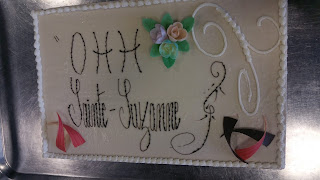 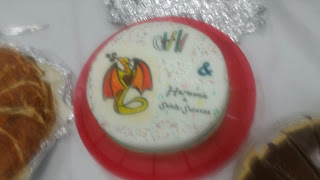 Sorry about the blurry dragon cake.  OHH by the way is for Orchestre Harmonie Herblainais.

I didn't know that you can get Iris plants that flower in Winter.  I was given a small clump a few years back, and I put them near the kitchen window so I don't have to go outside in mid-Winter to see them.   They seem to like it there.   Here they are, in full flower in mid-January 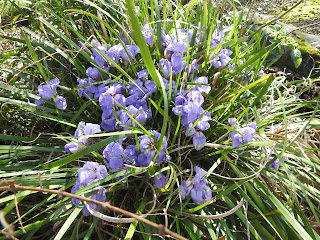 Posted by Mark In Mayenne at 04:27 No comments:

The care and feeding of orchids, or of this one, at least.  Put it outside in Summer, bring it in before the frosts.  A bit of water.  It's flowering now, it seems to be happy enough, but with a few dead bulbs in the middle, perhaps it's time to divide and replant it. 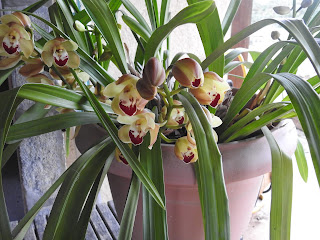 The little restaurant down the road seems to be going well under its new proprietor and chef.  Corrine and Alain decided to do a new year's eve dinner and we decided to go, to take a break from the gîte and from cooking for ourselves.  It was a good meal; the carte is below.

The wines were well-chosen, and one glass per dish was plenty, we left feeling full and pleasantly tipsy.  We could have stayed later to see in the new year, but we walked back up the hill to home and watched the Paris fireworks on the telly.


Happy new year to all our readers. 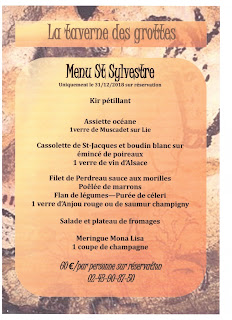 The Christmas lights in Laval are a well-liked feature of the darkest Winter nights here, and people come from miles around to see them.  I had intended to stroll around them on 22nd December after doing some shopping, but there was nowhere to park, the place being so busy.

We missed the lights one year, never having got around to making the effort to see them, so this year we made a special trip, parked up, strolled around the lights, bought some fancy chocolates as a treat, and grabbed a swift burger before coming back home.

The burger place is new, calls itself "Roadside" and replicates reasonably well what you might find at an American roadside.  They even have root beer.  I can't stand it myself, but Anita, having American origins, was pleased to find it. 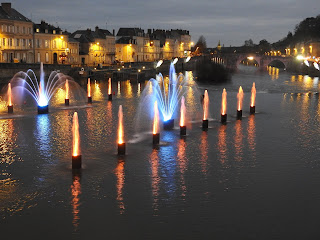 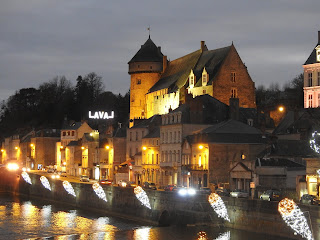 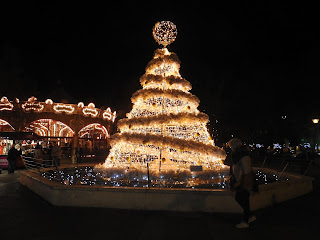 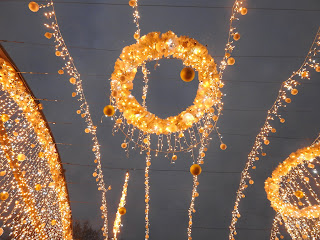