The shower posed a bit of a challenge.  The old waste pipe ran at ground level and disappeared into a wall.  Anita wanted a new shower tray that she didn't have to step up into, which means the waste pipe going down through the floor into the room below.  Fortunately I was able to chase the old pipe into the wall and reconnect a new one without too much damage downstairs. 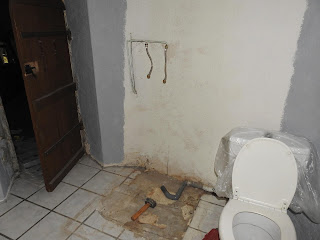 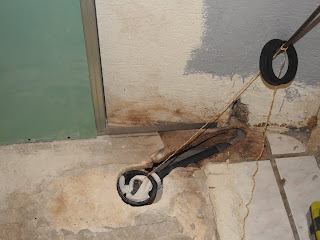 The floor under the shower tray was anything but level, so I had to flatten it by putting a cowpat of mortar down, covering it with plastic and letting it set with the shower tray on top, wedged up to make it level.  This seemed to work as a technique. 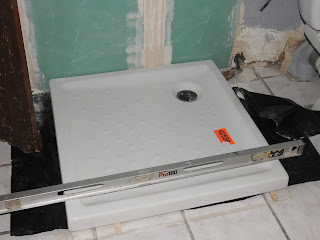 The very first step was to decide the extent of the renovations.  The tiling job on the floor is atrocious, so replacing the floor is an option.  The floor is also the ceiling of the room below, so replacing that would also involve re-doing the downstairs as well.  In the end, it's staying; we're going to smooth it out, then cover it with PVC floor covering.

The sink will go, as will the shower.  The bog is functional, and also happens to be mortared into the floor.  I'm not sure we could get it out without wrecking the floor, so it stays.  The shower and sink will be replaced, and we'll put up wall-mounted storage units instead of the floor-standing ones.  Oh, and the wall(s) will be grey where they're not tiled.

First step - remove the old sink, put up a new tiled wall, get ready to attach the sink and wall units.

The old sink is out, the water pipes capped off temporarily.  Now extended all the tubes so they will reach through the new wall. 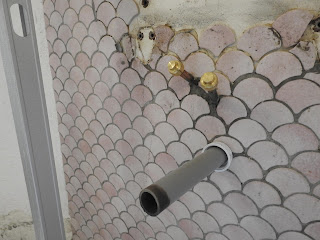 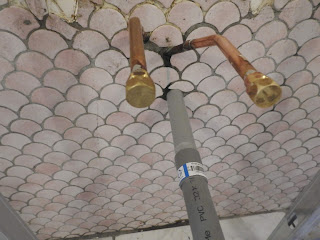 Put some steel frames for the plasterboard, get the new wall in.  Tile it.  Not my best job of tiling, but I've tried using some new-fangled tile fixing gadgets that I hadn't got used to.  It's all good experience, I'm sure.  And with careful planning, any inaccuracies will be hidden behind the wall units or under the sink. 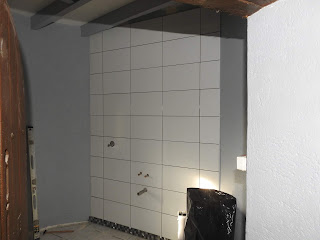 Well it really was a bit grotty. 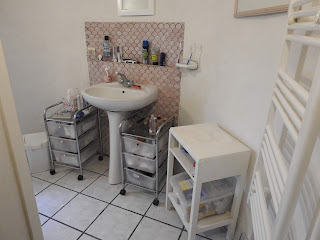 The fetching pink tile background to the sink features a practical, if narrow, shelf for toiletries.  Those that don't fit are stored in attractive stacked plastic baskets on wheels.  A wooden storage unit and electric radiator complete the view from the door. 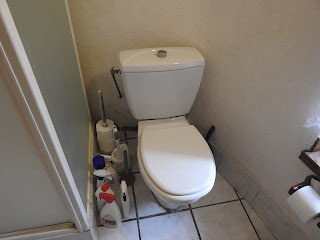 Against the opposite wall (actually the same wall because it's round) the bog is fed by a water pipe coming in at a jaunty angle from lower down the wall, with the cleaning stuff and spare bog rolls tastefully arranged beside it.  The shower unit to the left of the picture is a cheapo free-standing cubicle unit from a down-market DIY.  You have to push the walls to the right in order to open the door.

The walls are 40 shades of beige.

Something Must Be Done.
Posted by Mark In Mayenne at 11:49 2 comments:

Bathroom in the living room

For my sins, I'm renovating the upstairs bathroom.  It's been a week so far, and all the new bits are cluttering up the living room.  And the conservatory. 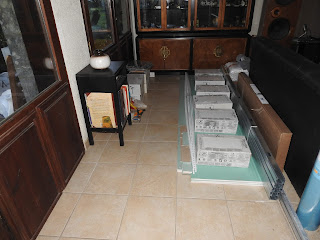 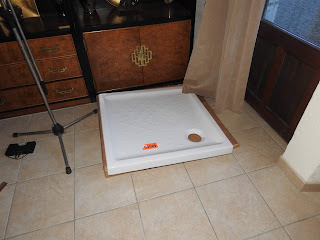 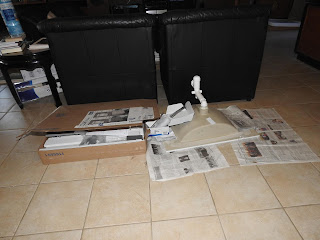 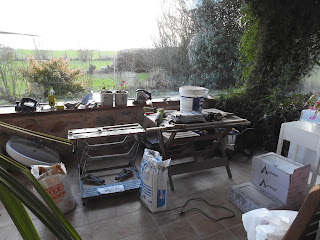 I figure that with increasing age, it's probably a good idea to keep the old noggin active, and that probably means learning new things.  Sudoku is all very well, but once you've learnt the tricks, it's just formulaic.

I spent some time, not long ago, looking at resurrecting my old programming skills, and I wrote a small app for Android devices, using Java, a programming language I had not used before, and an app development environment from Google.  This presented some challenges, not least being the steep learning curve.  The lack of a teacher was mitigated by various support forums on the web (didn't have that when I were a lad) but in the end, insights were won at great cost of time and effort.

At the same time, I found I was running down the same lanes I had explored when younger.  I don't find programming inherently satisfying.   It's good to finish a program, but the process of coding I don't especially enjoy.  It's a good feeling to be good at something, but better is to enjoy doing it, even if, in the end, you're not so good at it as you would like.

When I was I kid, I played piano.  An aspect that learning process that I just hated was music theory.   I considered it a necessary evil, and did as little as I could get away with.  Bad call.   Just as an ability to add, subtract multiply and divide, plus a knowledge of the times tables are gateways to the worlds of mathematics, so basic music theory is a gateway to harmony, arrangement and composition.  You can of course create music without this knowledge, "by ear", but it's a lot easier if you have it.

I am learning music theory, harmony, arrangement and composition.  I have a good teacher at the conservatoire at Evron, and I'm getting into it. 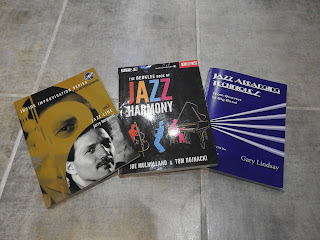 A few snaps from a chilly walk in the surroundings. 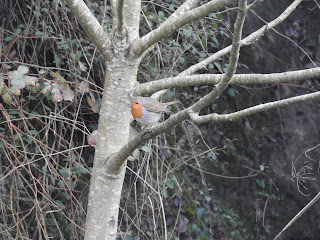 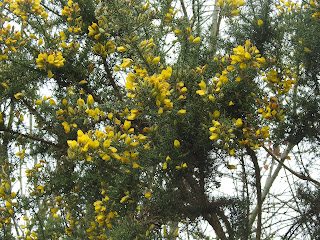 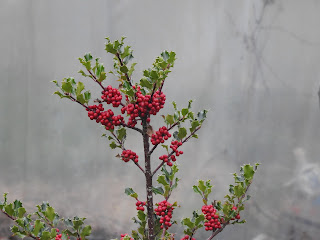 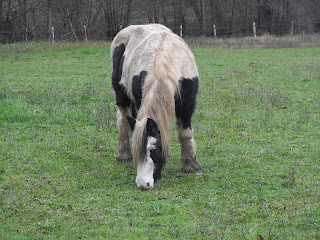