At this time of year, the onions are right at the end of season.  We get them in bags of 6 or 7 at our local restaurant supply shop, and often there is one in the bag that is squishy.  You have to choose carefully.

On the other hand, these fennel are maginificent, and I guess we must be right at the start of season.  They're firm, white, crisp and flavourful.  The fate of these is to be finely sliced and sprinkled over a smoked salmon starter for our guests. 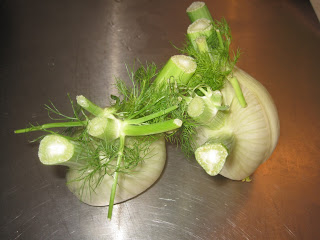 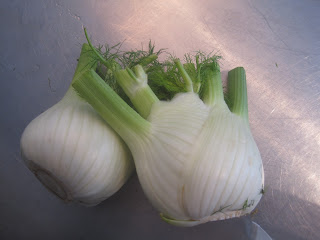 I can assure you they were delicious :)
Posted by Mark In Mayenne at 01:51 5 comments: Links to this post

What I hope was the last frost of the season was last night.  It managed to do some damage to my potatoes, but not too much.

I figure that now it's safe to plant out some of the tender plants, so I set about making some supports for the runner beans.  Failing to find any good straight plant stakes of the right length (at least two-and-a-half metres) I set off to the local garden centre to get some cheap bamboo stakes.  Except they don't have any.  They could flog me some nice, green, plastic-covered metal ones of the right length for a bit over four euros each.  No thanks.

Back to the drawing board, and I raided the hazelnut trees for a few of their longer branches.  Not as straight as bamboo, but functional, and they add a bit of rustic charm to the garden.  And they're free.  Should have thought of that in the first place, I guess. 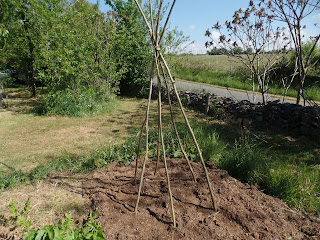 Posted by Mark In Mayenne at 04:04 3 comments: Links to this post

One of the things you can do with disused railway tracks is turn them into bike trails or hiking routes.  There's a few that have been so converted in Mayenne; the one we tested runs from an unremarkable and un-named place north-east of Laval, North towards the town of Mayenne.

The start point is quite literally a point where an old railway bridge crosses a road, and there is a slip-lane you can take that leads up to the track.  There is no parking there, so we drove along a couple of Km to where there is a proper car park. 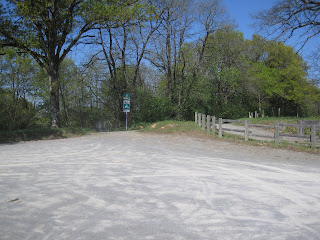 As with the towpath along the Mayenne river that we tested the other day, the railway line was very close to level, but unlike the towpath it was straight.  This made for a rather boring ride. 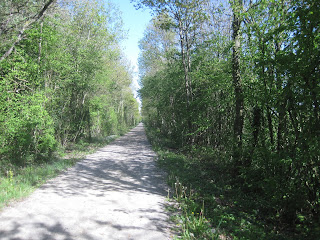 There were occasional points of interest as the track passed old station buildings, or went over or under bridges, but the interest to be had was in spotting landscape features through the trees.  The track had been well signposted, with adequate warnings for what used to be level crossings, with notices showing how grinning cars will joyously crash your bike if you're not careful. 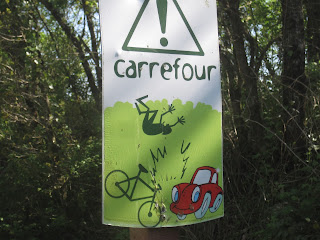 We had a pleasant pic-nic when we got to Commer (About 10km from our car park) and then set off back.  The weather was fine, the route calm and quiet, and the general atmosphere peaceful.  We will doubtless test other sections of the track, but the winner so far in terms of interest en route, is the Mayenne towpath. 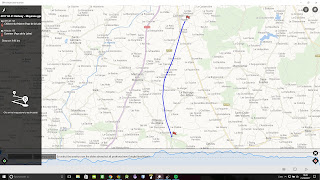 Posted by Mark In Mayenne at 12:31 2 comments: Links to this post

We have clear blue skies but the air is cold with chilly winds coming in from Russia.   This means that we are getting ground frosts and I am having trouble protecting my potatoes.  It's clear that the Russians aren't content with interfering in our free and fair democratic elections, they are trying their best to ruin our potato crop as well. 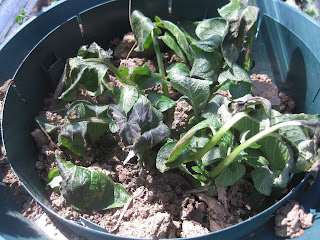 Posted by Mark In Mayenne at 05:16 3 comments: Links to this post

One of the things we intend to do with the new bikes is grab short holidays where we can ride them.  The gîte seems to limit the opportunity to take long breaks, so we figure that short breaks of a couple of nights, combined a not-too-difficult bike trek along, say, the Loire will give us the chance to visit some châteaux, as well as keeing us fit.

As a feasibility study, on this glorious Sunday (cloudless skies, 25 degrees C) we took the bikes to Entrammes and rode down the Mayenne towpath to a créperie for lunch, and then back again.   The views along the river were fabulous. 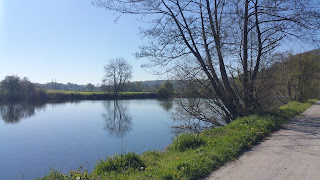 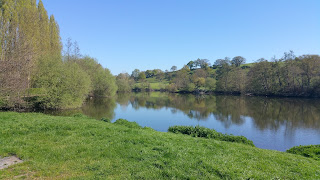 The crêperie doesn't serve crêpes on Sundays; I think there's too good a business opportunity to dissipate it on low-cost lunches.  The place was busy, and the quantity of bikes in their thoughtfully-provided bike racks told us that we were not the only ones with an idea for a Sunday bike ride. 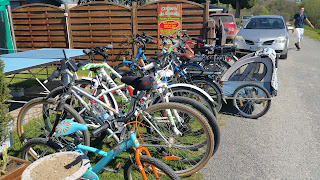 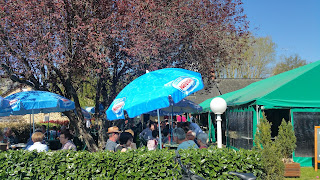 On the way back I noticed an unusual construction that I had not seen before.  I think it is a windmill, possibly for pumping water from the river.   It appears to be made of iron, now rusty, with a spiral stairway up to the top, and a little platform to stand on. 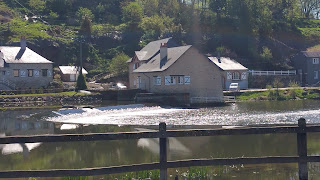 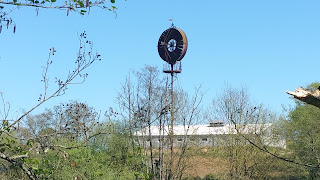 I used this opportunity to check out a bit of Android software that records your tracks using GPS.  I used to use Quechua Tracking, an excellent app provided free (with in-app purchses) by Decathlon, a sporting goods company, but they have withdrawn it.  Grrr it was an excellent app.  I have since installed iPhiGéNie that does the same thing but is harder to use.   Here is what it produces in terms of a mapped track output. 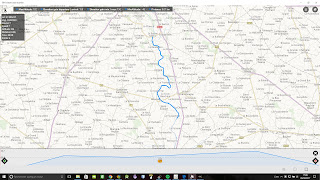 I only recorded the trip back up the river; it told us we did 17.8 Km in almost exactly an hour.
Posted by Mark In Mayenne at 08:37 5 comments: Links to this post 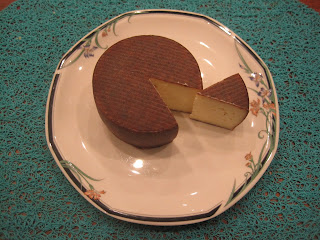 In France, if you want to tell someone that something's not a big deal, not to worry about, they say "N'en fait pas tout un fromage", that is "Don't make a complete cheese out of it".  Sometimes abbreviated, at least in this part of the world, to "N'en fais pas".

If you say "Thank you" to a cashier, or to anyone from you have just bought something, you are likely to get the response "It's me".  What?

The "c'est moi" is a shortened form of  "C'est moi qui vous remercie", that is, with the emphasis used in English, I'm thanking you.   At this point, the conversation makes some sense, but for a newcomer to France, it usually takes a few weeks before you hear the full version, and you finally understand those wierd conversations you keep having with shopkeepers.

We do the same thing in English of course.  If we say "Don't count your chickens", the follow-on "before they've hatched" is understood, but I wonder if foreigners think the English have some strange kind of superstition about poultry.  Same thing with stable doors.


My candle burns at both ends;
It will not last the night;
But ah, my foes, and oh, my friends
It gives a lovely light!

Nope.
Posted by Mark In Mayenne at 05:19 3 comments: Links to this post

The project to replace hinged wardrobe doors with sliding ones continues.  The upstairs hallway is done now, and looks a lot better than it used to.  Even the normal opening doors to the bedrooms look much better; it's amazing what a simple paint job can do. 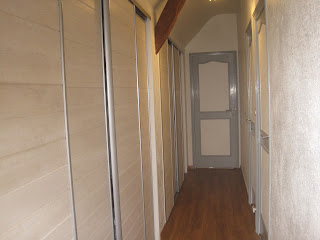 Of course, you can't just replace doors: the floor has to be redone or else it looks oddly naff, and the shelves inside the wardrobes have to be replaced with nifty sliding drawers and bins.

And you can't just do the hallway; the bedroom that has its own hinged doors needs re-doing as well.   This is the next part of the project.  The bits are bought and are hiding behind the sofa in the living room.   The old doors and frame have been taken out so I now have a hole that will be enlarged and then filled with sliding doors in the fullness of time.   We have decamped to the spare bedroom.  It's a bit cramped, so there's an incentive to get on with things. 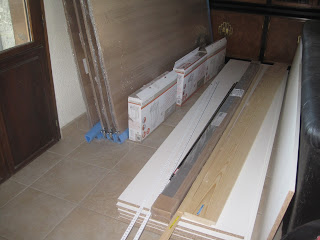 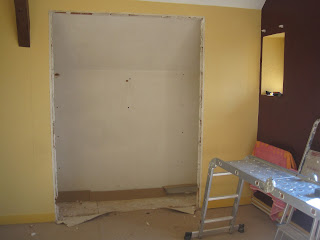 Posted by Mark In Mayenne at 06:29 2 comments: Links to this post

The front left wheel of the sit-on mower broke the other day.   Something that keeps it in place seems to have snapped, and the wheel was turning without its bearing for a little while.  This knackered the wheel, so I'm waiting on a replacement one from my local service agent.  They always say that parts will arrive in a few days but it always takes at least a fortninght.  Meanwhile, I need to cut the grass so I bit the bullet and bought a second-hand walk-behind self-propelled one to use as a spare.

Meanwhile, I can at least change the oil and replace the oil filter.  Hence the oily patch.... 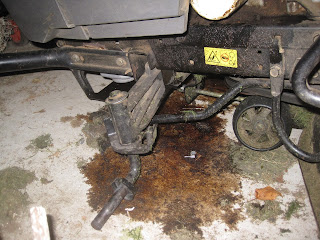 The boiler has a problem too.  The wood is fed into the boiler by a screw feed, and this arm is one of two that sweep the wood into the screw.   Except this one doesn't because it has snapped.   It's been over a week and I still don't have even a quote for a replacement from the distributor, though the guy just phoned to drop round to take some measurments.  Apparently there are several options for the mounting.

I can probably weld the two bits together, but I'd rather fit a new one, and keep the welded one as a spare. 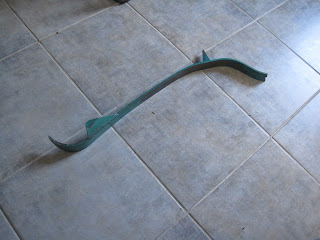