Yes! We have no spring onions

You can't buy spring onions in France.  The nearest thing they do is "petits oignons" which have small white onions on the end of green stalks.  They approximate to spring onions, but if you want the real thing you have to grow it yourself.

There is a little patch of garden between the house and the gite that I have been using for herbs and kitchen supplies.  In the picture there is Parsley (self-seeded and hence all over the place), two Thyme plants (a third one that I had elsewhere died over Winter), three Angelica plants and Sorrel.   I have also planted spring onions, Coriander and Chervil.

I am starting to wish that I hadn't dedicated the rest of the bed to flowers, but perhaps keeping the veg a bit hidden from guests is a good idea.   And here's a free picture of a bag of mixed flower bulbs I bought last Autumn. 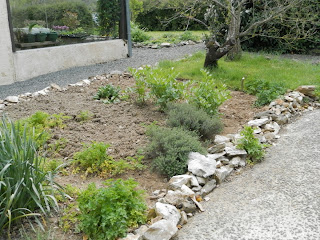 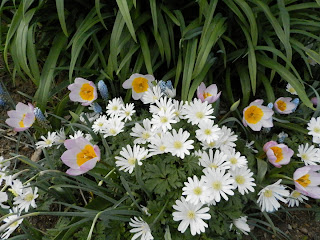 Stop press!  According to a commenter, you can find them in Asian markets :)
Posted by Mark In Mayenne at 00:38 7 comments: Links to this post

I happened to be listening to Sting's Ten Summoners' Tales recently, my favourite track from which is "The Shape of my Heart".  It discusses the hidden worlds of probability and chance that underpin our daily lives, and I can never hear it without musing on the strange fact that things happen that have no chance of happening.

Mathematical probability discusses the chances of certain events happening at some time in the future, and since it's therefore essentially about fortune telling, perhaps it's not surprising that it's sometimes treated distainfully.  "Something either happens or it doesn't", "probability is irrelevant", and so on.  But it has useful applications, such as telling a company how little it can charge you for life insurance whilst there being a good chance of it still being in business should it have to pay out.

Mathematicians assign a probability between zero (no chance) and one (certainty) that an event will happen under specified circumstances.  And when an event has zero probability, they say it "almost never happens".  Why "almost never" rather than "never"?  They're hedging their bets.

We can make the distance between A and B as small as we like, and ultimately, when B=A we don't have a length of line, we just have a point.  The probability that our random number is exactly equal to A is then A-A or zero.  (If you like, there is an infinity of points along a line of length 1, so the probability that our random number is equal to a specific point, is one in infinity, or zero)

So now we take our line of length 1, bend it into a circle, and pivot a spinning pointer in the middle.  When our pointer comes to rest, it will point at a specific number.  The probability, when we spun the pointer, that it stopped exactly at this number, was zero, but none the less it stopped there.  So an event with zero probability has actually happened.

Things happen that have no chance of happening.  Which is why predicting the future is a dodgy business.

As a corollary, in practical terms, you have no chance of winning the lottery, even though someone wins it most weeks.

The first guests of the season have arrived at the gîte; so the priority is on looking after them, cleaning the place up, then preparing it for the next group.

But the garden is going great guns, and the cold Spring and recent warm weather have resulted in a riot of colour as the daffs, tulips, anemones de Caen and other Spring flowers are all out at the same time. 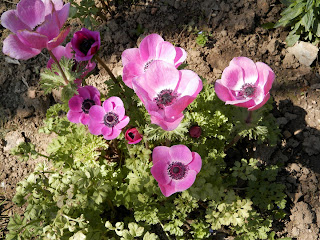 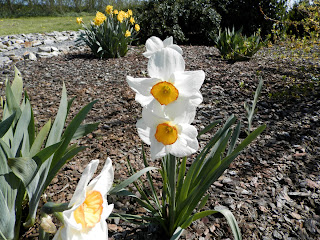 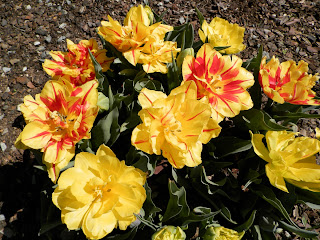 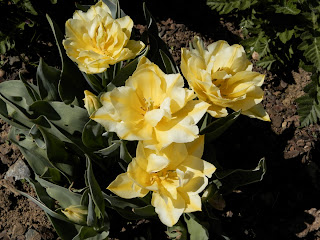 On the shrubby side of things, Forsythia, Mahonia, Peach and Rosemary are out in flower.  The Rosemary not only attracts the bees, but I can never smell it without thinking about what it adds to garlic and lamb. 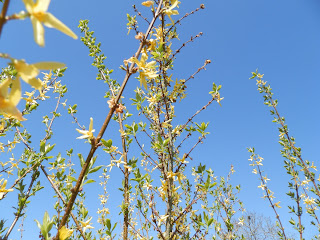 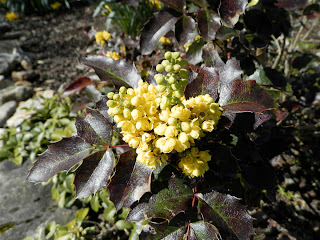 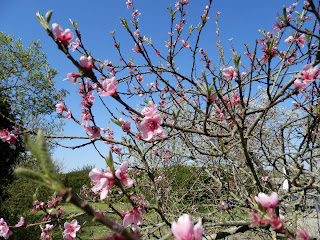 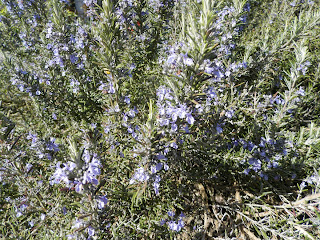 And last but not least, where would we be without Pansies adding their cheer to the mix? 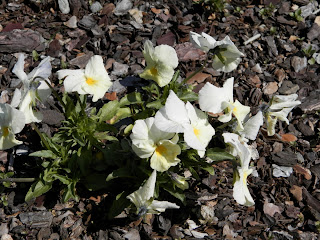 Posted by Mark In Mayenne at 10:24 2 comments: Links to this post

It was our end-of-term concert at the Evron Harmonie last weekend.  Two concerts in fact, with the same programme; one on the Saturday evening, the other on Sunday afternoon.

Sometimes, when we have to perform a concert, we're not always entirely happy that we have all the pieces off pat ("c'est pas gagné"), but this time, we were confident.  There is always a bit of stress associated with playing in a concert, and the stress is greater for the first concert than the second.  Once the first concert is over and we realise that we've done it, survived, and that it sounded OK, we relax a little for the Sunday, and this usually means that the second concert is more confident, more precise, and better-sounding.

This last time, though, the Saturday concert was better than the Sunday one.  The stress of the first performance sharpened us up.  We were too relaxed and confident on the Sunday and it lacked the level of precision that we had achieved the day before.  Curious.

Our best piece on the Saturday was an arrangement of the theme music from the film Judge Dredd.  Dramatic and menacing, it features a lot of loud percussion that makes it very impressive in our little concert hall.  Now when playing music associated with a film, I like to have seen the film, just so that I know what the music is referring to.  So I got the DVD and watched it. It's aimed more at a teenage audience I think, or perhaps at fans of the original graphic novel.  From my point of view, a dud.  French for a dud film:  un vrai navet - "a real turnip".   (And not, by the way, un vrais panais (parsnip).  OK, so I got my root vegetables mixed up, et alors? 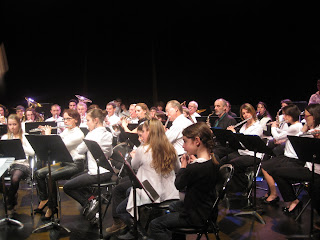 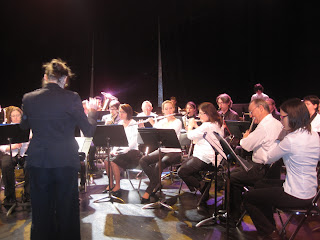 Buy nine get one free?  They drive a hard bargain these French garden centres. 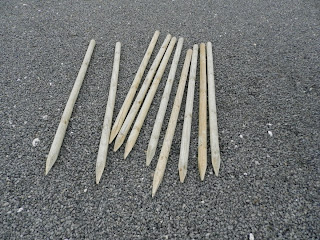 It's not la crise, honest, it's redressement financier.
Posted by Mark In Mayenne at 03:45 1 comment: Links to this post

Boy, Spring is late this year.  Or cold.  Or something.  Snow in Normandy today, but here just cold air, grey skies and drizzle.  None the less, the Spring plants are doing their thing, and there is some colour in the garden.

The winter Honeysuckle has pretty much finished flowering now, and Forsythia is not yet out.  But these daffs don't seem to know what a miserable day it is today, and there is even some colour in the wallflowers already.  And the Christmas rose is still going. 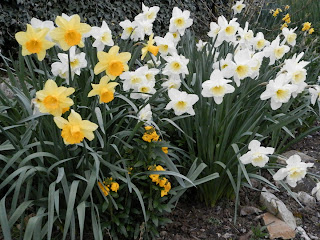 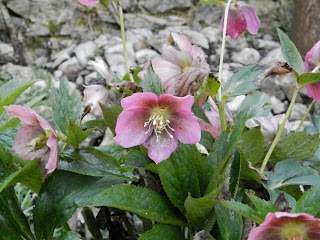 These Aubretias and daffs combine to make a nice little Spring area in the bigger flower bed, and I particularly like the colour of this separate clump.  I'm not sure if it's what you would call cobalt blue, but the colour reminds me of those little crunchy scented sweets you used to get, I can't remember what they were called. 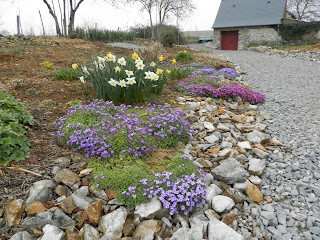 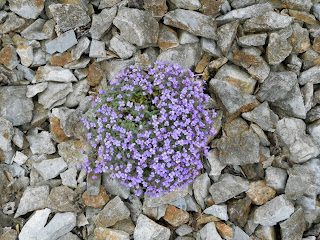 The Primulas and Hyacinths have pretty much had their day, but there is still time to acknowledge their contribution to the general lifting of spirits. 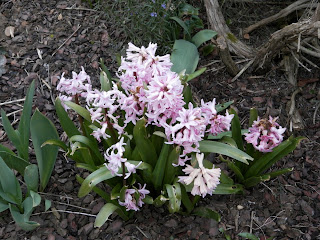 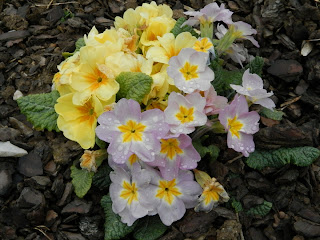 I have always liked the way the dew collects in droplets at the centre of Lupin leaves, a habit that extends to this tree Lupin that has survived the Winter.  And there is pleasure too in anticipation; these Paeony shoots promise fine things to come in a few weeks. 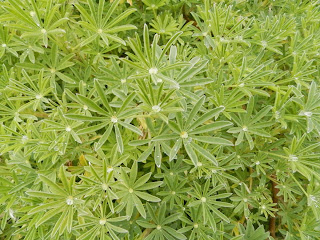 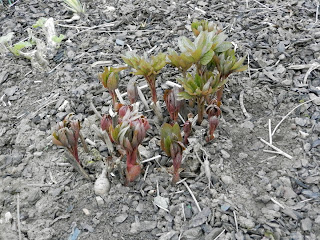 Posted by Mark In Mayenne at 03:29 2 comments: Links to this post

I like the mathematics of the fact that when you spin something around an axis, all the points in it describe circles.  So the concept of a lathe I find satisfying, in a related way.   Wood too gives me pleasure in its colours, its grain, how you shape and work it, and what it looks like when it's finished.

So when it comes to turned wooden bowls, what's not to like?  I own just one, that's enough to serve as a pattern, a focus of the pleasure if you like.  I bought it at a craft fair.  It usually holds a quantity of pot-pourri that gives a subtle scent as you walk past, but Anita was changing the contents recently, giving me the chance to photograph it in all its glory.  Here it is. 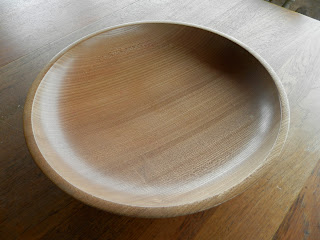 Posted by Mark In Mayenne at 09:31 3 comments: Links to this post