The flute course last week included a little concert at the end, with all the students playing in a variety of solos and ensemble performances.  I appeared at one point with Sandra and Lawrence with the first of Haydn's London Trios.  The bassoon is substiting here for a 'cello.

I like these trios.  They are not profound music, but seem to me to embody the simple pleasure of playing with friends.

I am rarely happy with my live performances, and this one is no exception.  However, here is the first London trio, warts and all.

Last year I planted 3 or 4 courgette seeds in a small clump.  The idea is that you select, a few weeks later, the best of the seedlings that come up.  None did.

So this year I planted 4 clumps in the expectation that I might get something out as a result.  All 4 grew, and since one plant makes a glut, this year we have a superglut of courgettes.

We're doing our best.  Grilled courgette, fried courgette, courgette muffins, courgette soup.  But when we went of for a week's holiday, we came back to find 7 or so large courgettes, some of them nearly marrow-sized.  What to do?  I was going to chuck them on the compost heap, but Anita said to put them on a chair outside the gate, offering them to passers-by.  I was sceptical, but they disappeared the same day, and someone even left a little "thank you" note. 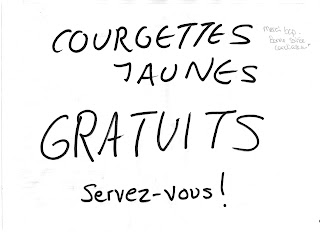 (It's in the top right-hand corner: "Merci bcp, Bonne soirée, Cordialement"; loosely "Thanks a lot, Have a good evening, Cheers")

I was chatting to the chef at the restaurant down the road, and mentioned that we spent the last week in the département of the Lot.   He observed that the vegetables that are grown down there are of excellent quality.  If our visit to the Friday market at Prayssac is anything to go by, he is not wrong.

Enormous onions, sweet peppers, aubergines, tomatoes, and so on (plus goats' cheese, ducks and foie gras), plus an introduction to échaillons, a cross between onions and shallots that I had not seen before.  They had house leeks too.  I like house leeks (for decoration, that is; the romans used to eat them). 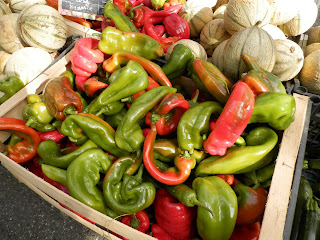 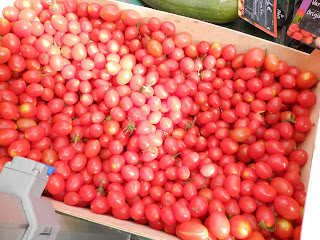 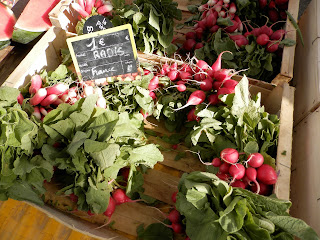 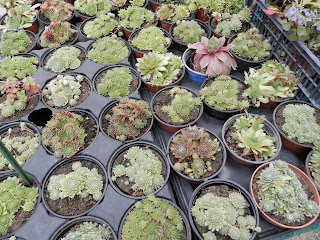 There was an advert on French TV some time ago.  I only saw it only once, and my memory is a little faded.  Broadly, it went like this:

We open on a scene of a small, cute, quiet, French country village.  An open-top e-type (UK reg) pulls up and a good-looking, impeccably-dressed and clearly wealthy couple steps out.  They enter a bar, say "bonjour" with a thick English accent, and walk around, observing the local paysans.  The camera view allows us to understand that the man is surreptitiously taking photos of the natives.  Having walked around getting their pictures, they say their goodbyes, and leave without buying anything.

After they have gone, the moustachioed local reading the paper is revealed to have a philosophy book hidden in it, the lady behind the bar turns the mundane photo on the wall over to reveal a copy of a work of a Grand Master painter, the musac switches back to classical.

The punch line was "big supermarket chain: supporting French culture since a long time ago".  It took a few seconds for it to sink in, but I howled with laughter when I got the joke.  It was probably the funniest thing I have seen on French TV.

Last week it was the Brits bringing the culture to the little village of St Martin le Redon (Pop. 196 depending on who's on holiday).  The local church hosted a free flute concert by Philippa Davies and her husband Jan Willem Nelleke.  Of a standard for which you would expect to pay a small fortune in the most prestigious concert halls around the planet, the concert was one of those gems that you can stumble upon in the remotest parts of France, if you know where to look.

And it completely changed my opinion of the Reinecke "Undine" flute sonata, that I had previously held to be somewhat anaemic. 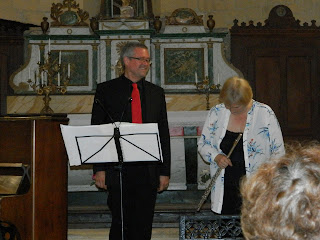 Posted by Mark In Mayenne at 04:09 No comments:

The little village of St Martin-le-Redon where the flute course took place is not far from the massive old chateau Bonaguil.  (That sounds a bit like bon acceuil, as in friendly welcome)  It is now the property of a local commune, and is in the process of being restored.  It's a massive and impressive building, a tourist attraction, and we went to see it. 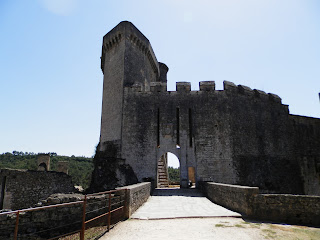 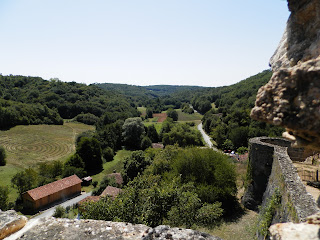 It is built on a high promontory, and offers a fabulous view over the surrounding countryside.   I'll let you read about it on Wiki, since they have a complete history of it.

There was an exhibition of artworks inside the castle, including for example, giant vampire bats hanging from the ceiling to intercept you as you walked around, or big black spiders just behind the door.  Very spooky.  And this rather fine dragon was lurking in a very dark corner, nearly invisible, revealed here only by the flash. 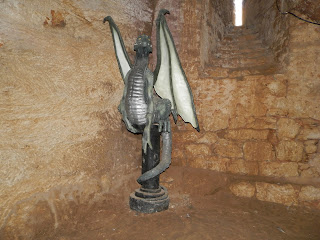 There is a miniatures museum nearby, specialising in historical dioramas, including many military models and battle scenes.  It is largely the work of one man who cast and painted the figures; an impressive display of talent and dedication.  I didn't go in but Anita is interested in minis so she did.  There is a full-size replica suit of armour outside; I was a bit disconcerted to see the face inside of it: it was somehow unexpected. 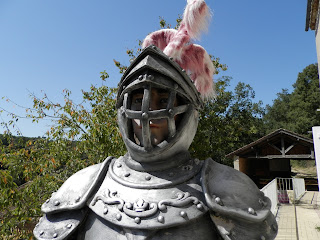 We spent last week at a flute course in a lovely ex-farmhouse towards the south of France.   Run by Philippa Davies  (and see also here) who is a fabulous player and wonderful person, combined with calm surroundings and delicious food and free-flowing local wine, it was a good escape.  And I met some lovely people, and it improved my playing into the bargain.

We got an opportunity to do some sightseeing, and visited a local market and castle.  More on those later.

It turns out that my recent attempts to improve my left-hand flute technique have resulted in "focal dystonia" which is stiffening the hand and causing it to do things I don't ask it to.   I looked it up on Google.  In flute players it happens mostly in the left hand.  Yep.  After a change in technique.  Yep.  I have some work to do there.  None the less, the last evening's concert went well and I played the first Haydn London Trio, with a bassonist playing the 'cello part.  I also played Köhler's Walse des Fleurs, a bit of victorian grandiosity that is nothing but good fun. 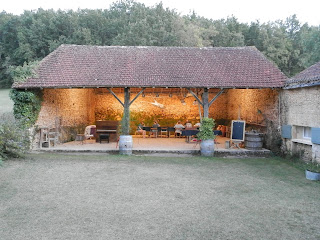 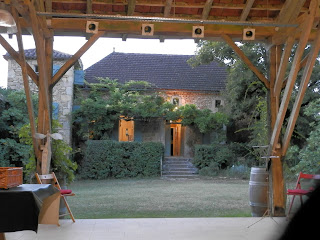 I discovered two new things this week, both food-related.   We were on the autoroute going south, and diverted into a nearby town for lunch.   A random pizza restaurant called to us from the other side of the road, so we turned off to it.

It turns out that it's part of a franchise, one I'd not heard of :  Baïla Pizza  The served a fine lunch, and were quite busy.  The pizza that Anita chose tased excellent, with a thin, non-stodgy base.  The small size was fine for one person's lunch.  I chose a folded pizza with garlic prawns, also excellent. 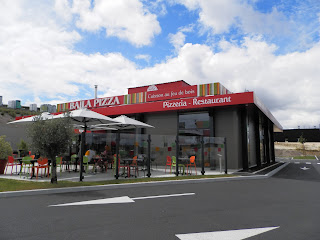 The other thing was discovered in a market in the little town of Prayssac in the département of Lot.  Great big onion-like things, red and white, that, according to the vendor anyway, are sweet.  They're a cross between shallots and onions, and the French call them échaillons.  They were about the size and shape of your hand if you compress the fingers sideways, like you're trying to get it into a narrow circular opening.  The échaillons in the picture are in the pile next to the tray of red onions.   I will get some seed and see if I can grow some since I like sweet onions in salads. 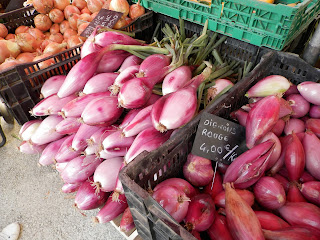 I didn't buy any, which was perhaps a mistake.