This year, May is devoid of clients in the gîte, which gives us time to blitz the garden just when it's growing the fastest.  We have been able to trim the hedge, weed the whole thing and sort the veg patch out.   Everything is probably as neat as it will ever be this year: the customers start arriving next week. 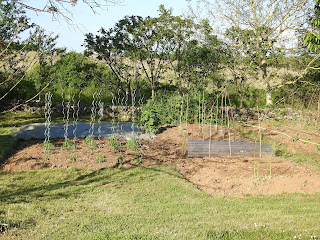 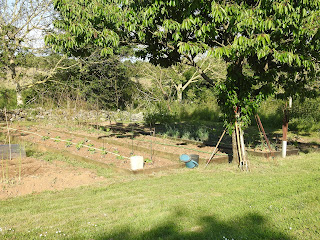 On the left of the veg patch are the tomatoes: 10 Rio Grande, 5 cherry and 10 coeur de boeuf.   Under the tarpaulin behind them I have planted butternut squash and melon.  To the right, from rear to front are aubergines, runner beans and chili peppers.   On the raised bed to the right are lettuce planted between various brassicas: cabbage, broccolli and cauliflower.  The brassicas are not doing too well, about half seem to just have faded away.  A root problem?

The next bed to the right has beans.  I planted berlotti beans for cassoulet under twigs from hazlenut treets that provide climbing supprt.   I also put in some broad beans but I think that mice or birds have eaten most - I have 4 seedlings out of about 20 beans.   Next year I will have to start them in pots.  Perhaps I will have to create a seedling nursery area.

The onions and shallots in the next raised bed are doing well, and I planted out leeks this weekend in the same bed.  I am hoping for good things here.  Next door are the gooseberries and strawberries, that seem to nourish the birds more than they do me.  And finally at the end, the spuds.  I planted Miss Blush again since I love the flavour, and this year I an trying out a variety that makes big potatoes for baking: "Samba".

I am trying, for the first time this year, "companion planting" which is an excuse for planting flowers among the veggies.  I put African Marigolds between each tomato plant, have dotted Zinnias about, and I put French Marigolds (seeds harvested from last year's plants) around the brassicas.  There are Nasturtiums in the somewhere too.   We shall see if this all helps.

Meanwhile, the Iris are flowering. 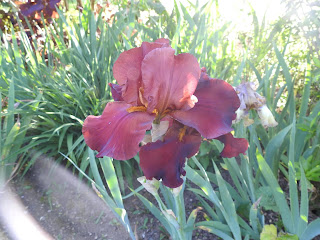 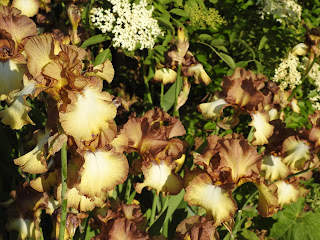 I went out this morning to do a bit of routine maintenance on the gite.   Since I pass the boiler shed on the way, I look in to check all is well.   It's not: there's a big drop in the water pressure in the system - a leak somewhere.  I find the leak, and spend the morning fixing it. 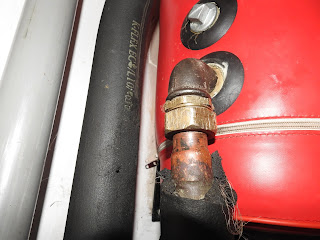 So in the afternoon I think, well, it's a nice day so I'll do something outside in the garden, that's a bit simpler than the gite maintenance I had planned for the morning.  I'll mow the lawn.  Halfway-through, the mower stops.  No nasty chinking sounds from the engine, so probably nothing serious.  It's not out of petrol, though, and when I turn over the engine, it nearly fires.  Likely a block in the fuel line.  I'll look at that tomorrow.  A night out on the grass won't hurt it. 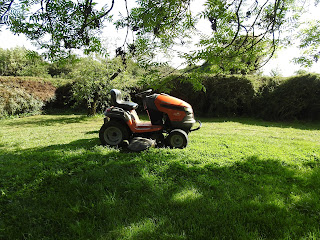 Yesterday I turn on the Android phone.  It doesn't give me a keyboard when I need to type something into it.  Apparently a factory reset is the best option.  That's for this evening. 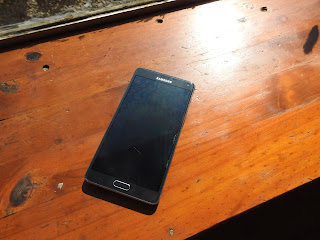 I have to drive to Evron this afternoon, and it's a nice day so I take the roof down on the car.   I drive into a shower.  *sigh*

There's a big hedge at our place, long and deep, going around the main parts of the garden.   It's a bitch to trim, and I've been doing nothing but that for the last three days.  It's finished now.  Next trim - Autumn.

I have a fair amont of kit to help with the job: a scaffolding set with wheels, and three hedge trimmers: a mains-electric-powered one with a long pole, one battery-powered and one 2-stroke.   The 2-stroke one is heavy, loud and smelly but powerful, the battery one is quieter and lighter but weak.  The electric long pole is heavy, quiet and powerful and necessary for cutting across the top of the hedge.

I'm thinking that it might be time to combine the benefits of lightness and power and get a small, mains-electric-powered trimmer.   It's the lightest you can get since the trimmer only houses the motor and not the fuel as well, and a mains -powered 600Watt one should be powerful enough, quiet and light.  The mains cable won't be a problem because it'll be out and in use anyway for the long throw one, and I'm getting tired of coming in smelling of 2-stroke fumes, or breathing them in, come to that.

I have thought about the possibility that a small tractor with hedge trimmer would be a good idea.  I'd really love to be able to drive it along the two sides of the hedge, trimming as I go.  The job would be done in an hour max, but it's not actually possible to do that - there are trees, shrubs and piles of firewood in the way.   That ground is also far from level, so I'd end up with an undulating top to the hedge, something that I try to avoid.

You can see part of the finished hedge in the pic below.  I used to be a bit more fastidious about getting it straight, flat and horizontal but these days I'm just up for taming the beast.   I left the trimming so late one year that the hedge flopped over a gap in it, so I'm trying to make an arched tunnel.  It's early days, but it looks like it will come to fruition in a few years.  And who doesn't like spooky tunnels? 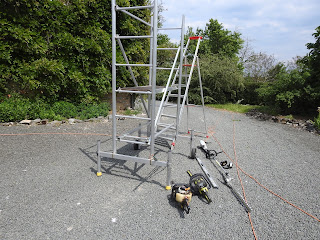 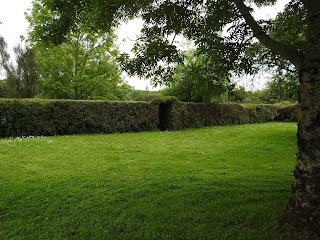 We took a short cycling break near Carquefou, not far from Nantes and near to the Loire.  The idea was to bike along the Loire towpath, but the Nantes-Brest canal is also not far away so we did a bit along that as well.

The first thing that went wrong happened on pumping up the tyres on Anita's bike.  The stem of the valve broke off.  That's the bit that sticks up out of the tyre so you can inflate it, and it just broke off bringing the valve mechanism with it, so I couldn't pump it up.  I have been maintaining bikes since I was 12, and that has never happened before.  We found a friendly local bike shop and got it fixed.

For the Loire valley part of the ride, we went to the South bank of the river, just opposite Thouré-sur-Loire.  The cycle path is very well-maintained which made for an easy ride.  The weather wasn't warm, but not too cold, and not much wind - good biking weather. 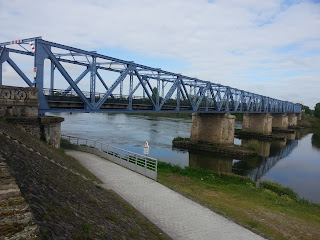 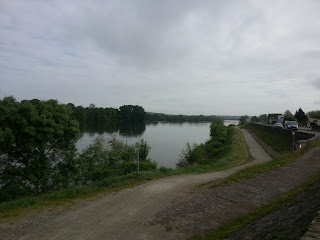 The first time we looked for the Nantes-Brest canal we stopped by the little village of Le Pas-Chevalier, since the road crossed what looked like a canal there.  A short investigation proved that it is in fact a small river that joins the big canal a little way away so we started our ride a bit farther along the road where it does actually cross the canal.  We rode as far as to where it joins the river Erdre.

On the way back in the car we heard a sound like a rifle shot as if something hard had fallen off a tree and hit the car.  Shortly after that I realised that the driver side front window wasn't closing.  I could lower it but it wouldn't go up.  Stopping it halfway down, I tugged on the glass to lift, it, let it slip from my hand and it promptly fell back into the door and wouldn't come out.  The local garage couldn't fix it at such short notice, but they did give me a length of translucent sticky-backed plastic to stick over the hole. 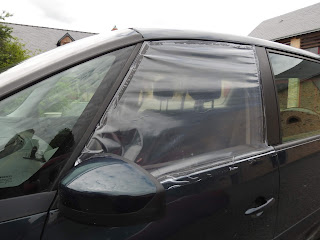 The car was scheduled for a service a couple of days after we got back, so we took it to the garage straight away, where it is currently resting pending repair.  On the way to the garage we discovered that the driver side rear window isn't working either.  *sigh*

However, the cycling was good and we decided to take a further look at the Nantes-Brest canal when time permits.  Happy biking.

Here's some garden pics.  The plants seem to be working properly, but you can never tell.... 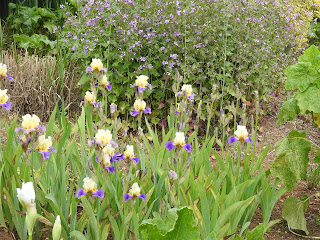 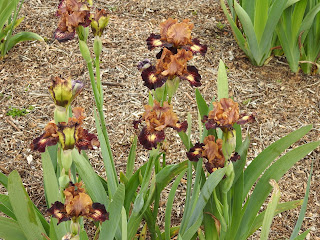 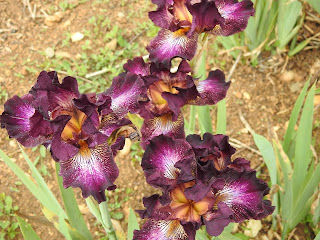 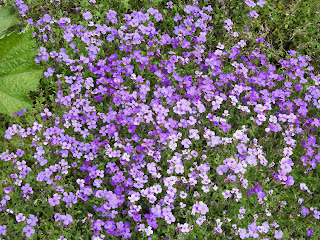