A tradition: home-made mince pies. Not a French custom, and they don't know what to call them. Rather, they describe them, as little pies (tartelettes) of dried fruit, but tartelettes don't normally have lids.

Anyway, mixed dried friut, a bit of brandy and a topping of sweetened cream cheese, all wrapped in orange pastry. Yum! I'll take a couple down to Marie and Noel at the Canyon, just to see what they make of them. (And one for myself, to share over coffee) Still warm.... 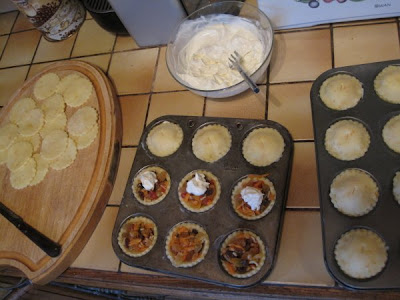 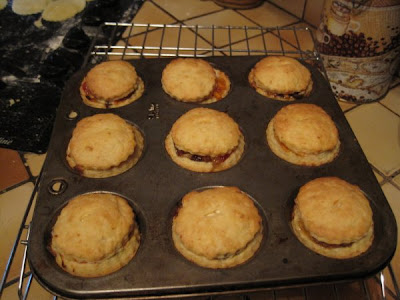 There was a concert this Sunday in the basilica at Evron; a performance of Bach's B Minor Mass. I like this music so I went. The problem with the basilica is that it's big, stone, and usually unheated, and the pews are uncomfortable. I was warned to dress warmly, and bring a cushion. So I did. Good thing, too, considering the snow we've had the last few days.

Great concert, quirky in parts, but enjoyable. The cold was definitely starting to seep through towards the end: I even had to put on my wooly pom-pom hat. 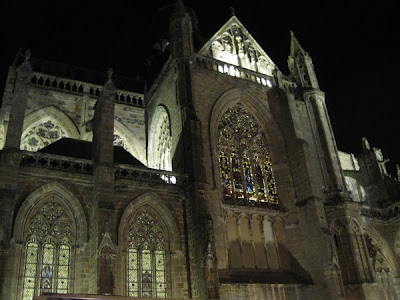 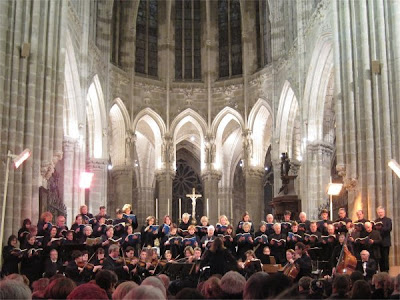 Incidentally, the French would say that the piece was "interpreted" rather than performed. I like this; it implies some added value on the parts of the players.

We had an inch of snow today, the first of the year, so despite the arrival of a snuffly cold I took a short walk to enjoy the cold, the white and the solitude. 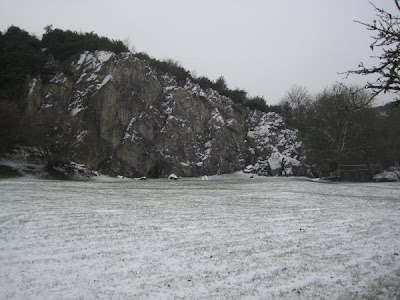 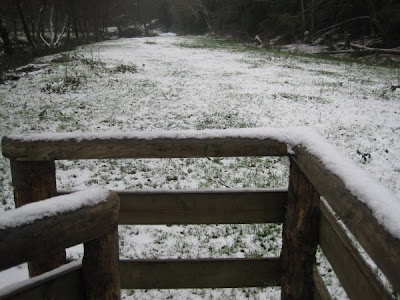 I apologise to my blogging pals. I have done a new windows install today and it has lost me all my blog links. I will be back, but please be patient.
Posted by Mark In Mayenne at 08:59 10 comments:

A trip to England to visit relatives and exchange presents has taken me out of circulation for a few days. I have no special diary of events for you, but a few observations and reactions to being there. 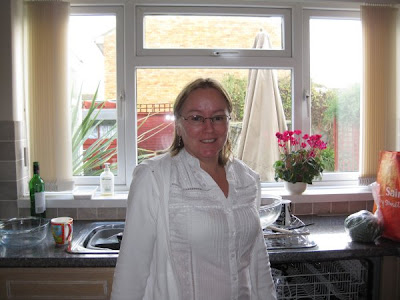 Presenting my lovely sister, our host for the weekend. Poor girl, not only did she have to put up with us, but knowing that a trip to England was in the offing, I turned her house into a warehouse during the previous several weeks, with all the stuff I bought by mail order and had shipped to her house to await collection. 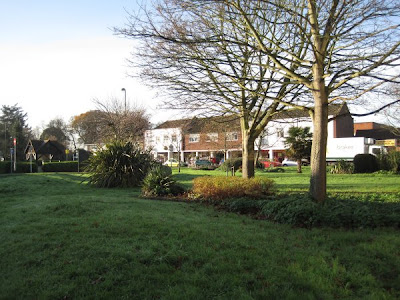 This is Stubbington green, which I always think should be home to Pretty Little Polly Perkins. I had to choke back a cheery "bonjour messieurs-dames!" to the lady behind the counter of the Post Office, and had to make do with a passing smile instead. The wife had 37 Christmas cards to post but miscounted, and bought 36 stamps. Given that the queue by this time was even longer, and she would have to had to have spent as long again posting the last letter, was the posting mission 97% successful, or 50% successful or a complete failure? 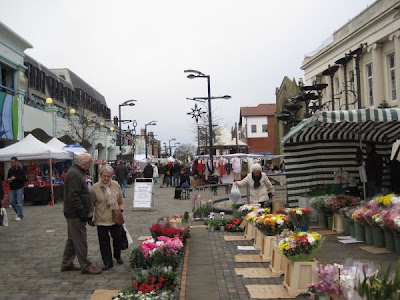 Fareham is a market town, and used to have an iron foundry. The foundry is commemorated by a sculpture of an anvil hitting itself with hammers, which just makes me think of a hangover. I bought a zip-up fleece for a tenner this time last year and I have practically lived in it indoors this year, so I got another one with a slightly different pattern. Still the same price. Can't be bad. 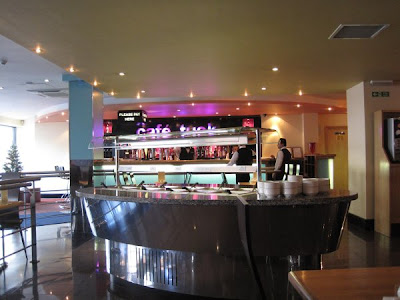 There is an "all you can eat" curry buffet restaurant in Fareham. I do miss curries. Not that there aren't Indian restaurants in France, I have just never found one that does hot like English ones. Hottest I have found in a french restaurant is the herb and chilli oil you put on pizzas. I ate far too much, even though I only took the tiniest portions of the poppadums, chutneys, rices, curries, to ensure I could sample them all. Best was chicken chilli massala. 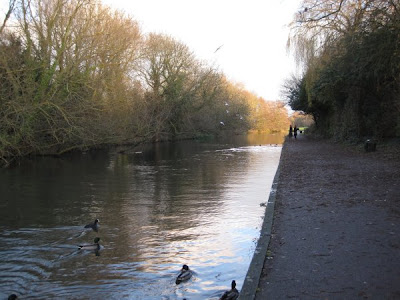 Visited my grandma while I was there. She's 96, and her short term memory is shot to bits; non-existent in fact. But she is looked after every day, and seems to be enjoying herself. This stretch of river I call Woodmill and is not far from her house, and I used to fish here with my dad when I was a lad. I like to go and see it when I can, walk along it sometimes, but not this time. Fishing was banned here ages ago, much to my dad's disgust at the time and although there are no "no fishing" signs to be seen any more, there were no fishermen either.


Other impressions? Vegging out on rubbish TV that I don't have to concentrate on to understand. Cracking up when radio one broadcast a snippet of a Very Serious Newsreader getting the giggles as he read the item about a "prankster" who tried to launch a firework rocket from his bottom on bonfire night, and suffered "serious burns and internal injuries". I don't think that "prankster" is the word I'd have chosen, at least in casual conversation. And am I the only person who gets irritated by a radar speed indicator that tells me to slow down whatever speed I am doing? Am I a grumpy old man? 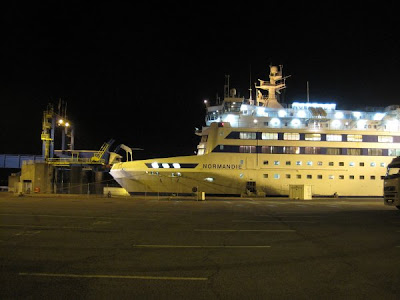 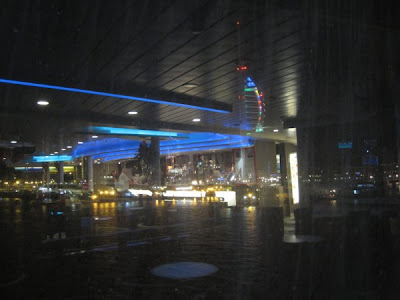 The rain makes for bleak viewing from the conservatory, but in the corner there is a little Kalanchoe flowering, reminding me of the generosity of the daughter of one of our guests, who gave it to us. 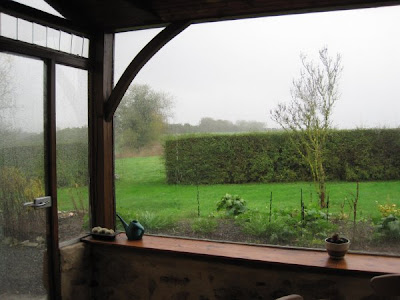 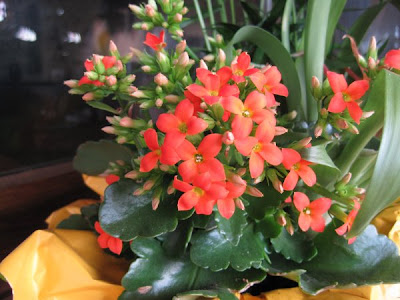 The second day of our visit was a short excursion into the main town of Nantes. Nantes was largely flattened by the Allies during WWII, so the architecture is mostly modern, and therefore, almost by definition it seems, ugly. But the chateau is intact and is worth seeing, housing a museum of the town of Nantes. It gives a detailed and fascinating account of the evolution of the town from medieval centre of political power, through busy port, (active in the slave trade), industrial manufacturing city, up to its current incarnation as centre for tourism and bureaucracy.

There is an interesting publication on display; a book called The Black Code. A treatise on the ethical treatment of slaves, its purpose was to reconcile the "Christian" concept that "blacks" are "Children of God" with the idea that they were at the same time an item of household property like a table, horse or barn. It considers questions like "Who do the children belong to, if the father is owned by one master and the mother by another?", or "Can you adopt your children by a slave?" or " Is it OK to mutilate a slave?", and other burning questions of the time. It is a thick little book, densely typed, which perhaps attest to the difficulty of its stated objectives. 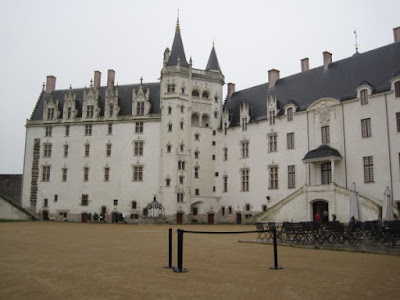 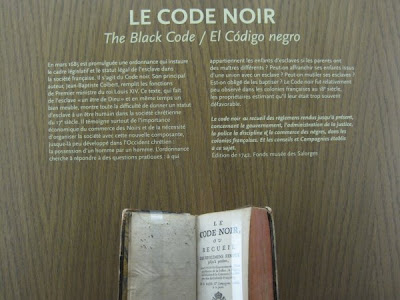 Moving out of the castle into less offensive subjects, there was, in the middle of town, quite the finest coffee shop I have ever been in. It was Italian. Featuring genuine hot chocolate drink (28 flavours!), the kind of ice cream for which Italy is justly famous, and coffee strong enough to paralyse a small horse, it was the ideal place to recover. 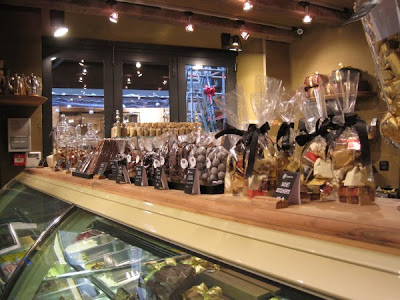 The regional tourism office organised a seminar designed to help people in the tourism industry to make the most of the internet. It was heled in Nantes, a town that the wife and I have been meaning to visit, and it also included a free visit to the "famous" Mechanical Animals of Nantes, as an added incentive. So we set off early for the seminar, and stayed overnight afterwards.

It has been a long time since I sat through a business conference, and it reminded me how much I dislike them. Not that they're not useful, I just wish there was a better way of getting the information than sitting down for half-day stretches and listening to someone talk. 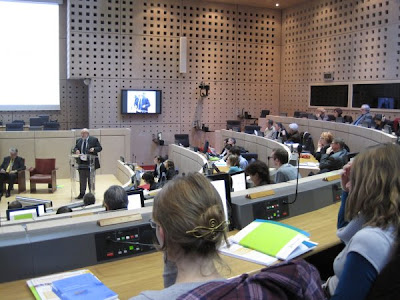 The conference centre was fancy, perhaps the best-equipped I have been in. A microphone per person, one screen per two people, CCTV, the lot. The morning presentation was interesting, an enthusiastic consultant expounding on the increasing use of social networks (e.g. tripadvisor, facebook) by tourists in selecting places to stay. That reminds me, I must try to get more of our guests writing us up on tripadvisor. (Search for Domaine des Hallais)

Ultimately, I found the day frustrating. The tourism office spent a long time telling us what they had done in 2009, and what they are going to do in 2010, and nothing about what they have achieved nor what they are planning to achieve.


The mechanical animals were something else; huge mechanical contraptions, steam and electric powered, made from wrought iron and plywood. They have a Jules Verne-like victorian air, which is appropriate since Verne was born in Nantes. I especially liked the elephant, and the sense of humour in the little boat. The yellow raincoats on the volunteers in the boat are not for show. They got drenched. 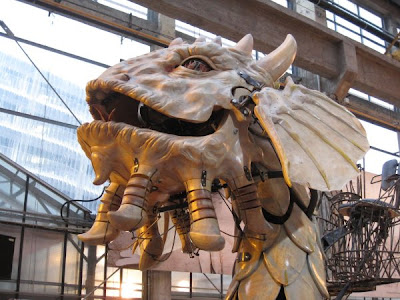 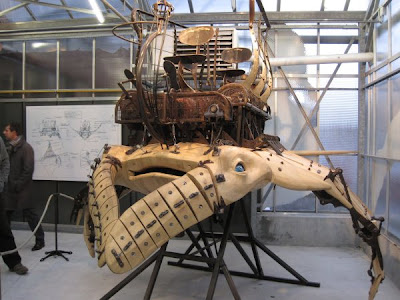 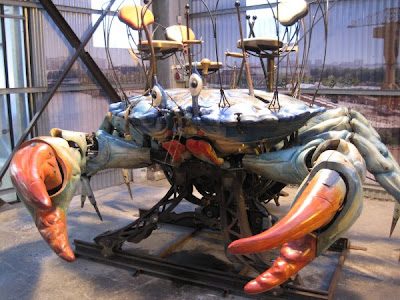 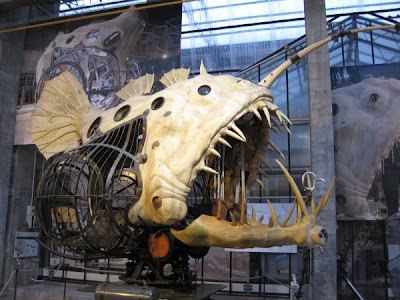 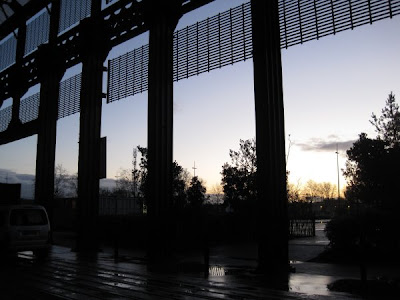 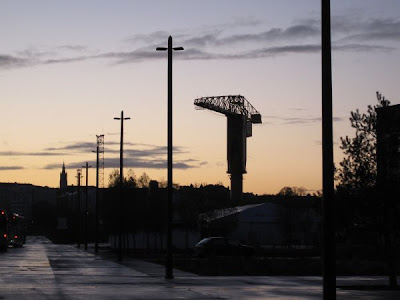