To bio or not to bio

My excuse is that the French pronounce it "bee-oh".

A beautiful Sunday morning with the first sunny-but-crisp overtones of Autumn, so we popped down the road to Marie's restaurant for a coffee and to enjoy the walk in the cool sun.  Whilst there, we spotted a flyer for a food fair in Le Mans, and were sold on it by Marie who had been there herself and thought it was great.  Off we went.

It was held in the beautiful Abbé de L'Epau, a converted monastery, and featured food tastings and cooking demonstrations, mostly of local produce.  There were cheeses, fresh veg, spices, vegetable carvings, cold pressed nut oils of various kinds, meat products and most things that you would expect at a food fair. 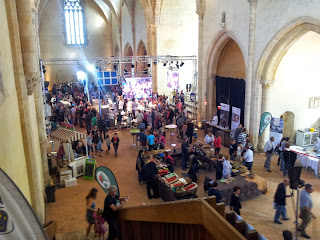 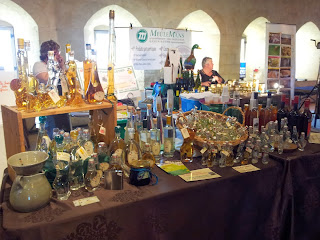 But what struck me was that almost all of it was "bio", that is, French for "organic".  I am in two minds about this trend.  I believe that, as first expressed in Gulliver"s Travels,  "whoever could make two ears of corn, or two blades of grass, to grow upon a spot of ground where only one grew before, would deserve better of mankind, and do more essential service to his country, than the whole race of politicians put together."   And it seems to me that much of the result of organic farming is that one ear of corn is now growing where two used to grow.  And the result is correspondingly more expensive.

Now don't get me wrong, I appreciate quality where I can discern it.  I appreciate commercial competition and customer choice.  If an organic product is better than its non-organic counterpart in some way that I can perceive (or measure, in the case of pesticides), and is worth the price difference to me, then I'm all for it.

But I do also come across an awful lot of BS in food production and promotion.  I'm aware that blind wine tastings generally favour cheaper wines, for example, and fashion and scarcity are also important factors in perceived value or quality of food.   In many cases I have yet to be convinced of any inherent virtue in the final product, no matter what the spiel is on the packaging, or what organic processes I am told were involved in its production.  So call me a philistine.

But I wonder if there's not also a moral element here.  It is all very well, from the position of a full wallet and full stomach, to contemplate consuming expensive low-yield products, but if all the world's food was grown this way, there would be many more starving people than there are already.  On the other hand, if all cars were Ferraris, not many people would drive either.  There is a place in the market for high end in pretty much everything.

So organic food gets a very qualified "maybe" from me.  I wouldn't go so far as to say I avoid it, but I can't think of any product that I insist on being organic because I think it's better. 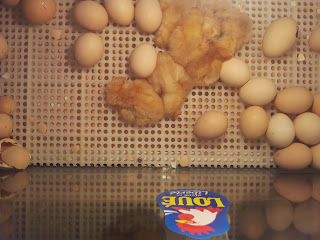 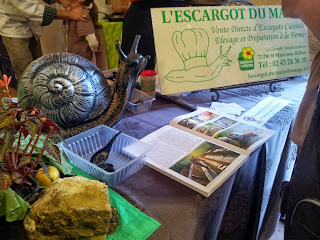 Fitness of tools, companies and people

It was a couple of years ago now I was in the USA on a holiday trip, and the hotel where I was staying had an exercise treadmill.  So I gave it a go.  I walked on it rather than ran, since I don't really have the body for running.  I did an hour at 4mph on a 15 degree slope, and got really hot and tired without being useless for the rest of the day.  I was impressed not only by the work you can do, but I was still burning up for an hour or so afterwards, and I like the idea of using up calories while I'm lazing about.

The fact that I couldn't walk the next day is entirely down to the fact that I used it barefoot, which for some reason seemed like a good idea at the time.

So anyway I got one the other day for the little gym space in the gîte, since it's a plus for the guests and I can use it too.  The main criteria were that it had to be able to reproduce the experience I had in the USA, i.e. a 4mph walk on a 15 degree slope, and be suitably robust for the occasional use it would get from the clients. At the end of this link is the one I chose.  It does the slope and speed, up to a decent run too.

You have to smile at the company name: Tool-Fitness.  You get the drift; it's about tools for keeping people fit, but that's not the first thing that I think of, at any rate.

So off goes the order, and in the fullness of time the the machine arrives, the package weighs 105 kilos, so we unpack it on the ground floor, inspect it, sign off the delivery, and then we recruit some help to get it up the stairs later in the day.  Dismay!  The plastic cover for the motor is cracked; a replacement is needed.

We did get, via email, some pretty fierce instructions about inspecting the package on arrival, and what to do if it was broken.  Our bad. We probably invalidated any damage insurance that might have been in place, so we were prepared for some negotiation to take place over this.

But the problem is that it took 5 phone calls (and an e-mail that got an automatic acknowledgement and nothing else) over a 10-day period to get a promise of a replacement part.  The first promised shipment date was missed and no warning was given.  The replacement part arrived today and is in place, three and a half weeks after delivery.

Now in the end, I got what I needed: my machine fixed and all is well.  They didn't charge for the part nor for shipping it, which is great.  But still, it leaves a bad feeling.  A buyer over the internet from a distant supplier feels more vulnerable than one who buys from a local shop, for all the obvious reasons.   A customer with a problem is an opportunity to win great loyalty.  Didn't happen.

Here is the beast in the gym.  I've used it five times already and it works well.  Should keep me busy for a while. 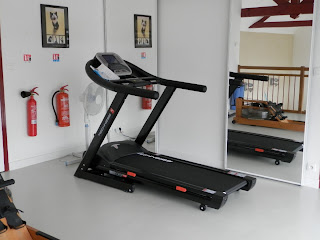 The French weekend of the journées de patrimoine has just come and gone.  It's a weekend in which you can visit private buildings and property that are considered to be part of the French heritage and that are not normally open to the public.

Our friend Leo down the road opened his large and pretty garden to visitors.  Now we know his garden quite well, so we wouldn't normally have gone, but there was going to be an oboist giving a lecture/concert in the garden, so we dropped by. 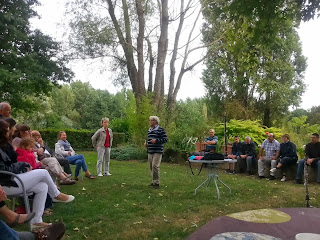 The lecture was interesting enough.  The oboe is a double-reed instrument, and the three main orchestral instruments of this type are the oboe, the oboe d'amour (pitched slightly lower), and the cor anglais, all of which were demonstrated.  Our presenter told us that the name cor anglais arises from cor anglé, meaning angled, since the instrument used to be built with an angle halfway along the body to make it easier to hold.

However, I also understand that other people believe that the anglais is a corruption of the German word for angelic.  Apparently double-reed players get quite het up arguing about this.  And on musing about this fact it occurred to me that the phrase "getting het up" is the only time I ever come across the word "het" in English.

My wife is American, so her pronunciation is just occasionally a bit odd.  When she says "ate", she pronounces is like "ayt", whereas I pronounce it (correctly) as "et".  My way is apparently considered to be a bit old-fashioned these days.  So I wondered if the word "het" might be an old past participle of "heat", so the phrase would therefore mean "get heated up".  And on looking it up on the great interweb, indeed it appears that it is.

This pot is of turned burl wood, I picked it up in a craft show ages ago.  It appealed to me because the artist has stained the raw wood in a mix of green and gold so it brings the spectrum of forest colours into the house. 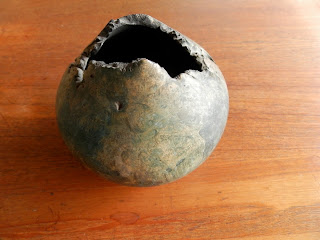 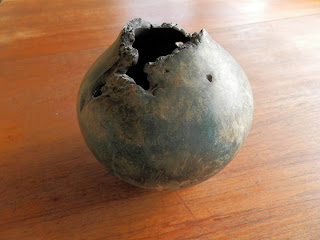 The turning work is good; I don't think that the skin of the pot is thicker than 1/4 inch anywhere.   And a curious thing - viewed from above it looks like a dolphin. 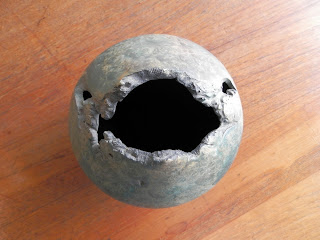 I find elegance in simplicity.  If something is simple, but works as well as something more complicated, I prefer the simple.  What's more, if you are buying, the simple tends to be both cheaper and more reliable.

And so I share with you, a picture of this little garden sprinkler that I bought the other day, that delivers an even spray of water over a circular area, with no moving parts.  I think it works on the basis of a turbulent flow of water around a vortex, that somehow creates the random distribution of droplet speeds that you need for that to work.

5 euros each, and on sale, probably because no-one believes they work.  I'm going to get another one. 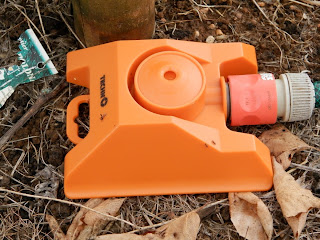