A couple of deer grazing in the field out the back this morning. - Mother and fawn? 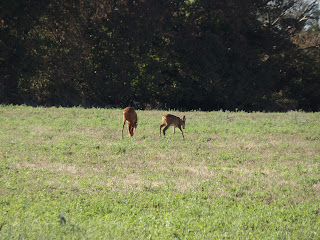 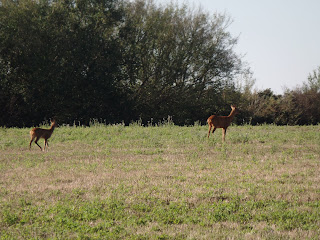 The battle for posession of the strawberry crop was won by the birds again this year.  They are content to eat the fruit before it is ripe, so I never get a look in.  I had protected the plants with netting stretched across semi-circular hoops, but it didn't seem to keep them out.  Sterner measures are called for.

I saw these "flexi balls" promoted in a garden catalogue some time back, and bought a pack on the basis that they might come in useful, and constructing a bird-proof strawberry cage seems like a good thing to try.   I got some iron rods such as are used for reinforcing concrete, cut them to size and joined them with the flexi-balls.  The result is the framework you can see in the picture. 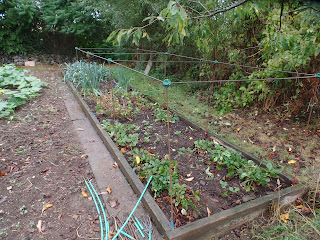 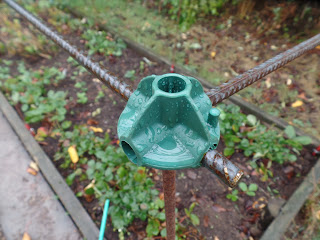 The metal rods are flexible, as are the flexi-balls (surprise) so the structure sways quite easily, but seems to stay reliably together.   I have enough plastic netting to stretch along its length, but I need to think a bit more about the sides.  I need to be able easily to lift the netting up to get at the strawberries, so I am thinking about individual panels that correspond in size to the positions of the metal frame pieces.   I could use chicken wire (expensive but relatively rigid) or plastic net, on some kind of wooden frame suspended from the horizontal metal rod. 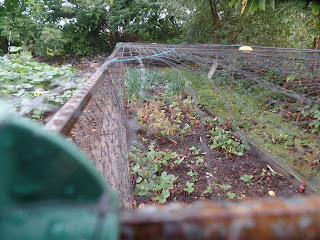 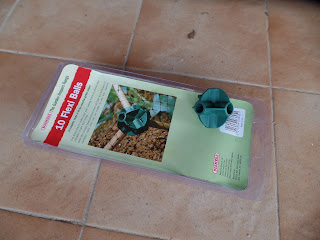 The battle for the strawberry crop 2017 has started and the enemy isn't even aware yet.  Hehehe!  <= evil cackle.
Posted by Mark In Mayenne at 07:28 2 comments:

The heating system sprang a leak last week.  Nothing serious; a fibre washer had perished and water was seeping past it.  The difficulty was that I had turned the boiler on (to heat the pool for guests) and didn't really want to turn it off until they had left in a few days' time.

I turned to that wonderful modern aid to DIY, mastic; in this case, a plumbing jointing compound that I bought from Wickes when I was last in England.  I can't seem to find it in France.  It says you can effect a temporary repair if you take the water pressure off, smear the mastic onto a bandage and wrap up the leak.  Well I couldn't take the water pressure off without shutting down the boiler, so I just wrapped it up.  It worked.  The leak was reduced to a slow weep and the pressure lasted through the weekend.   Today I did the fix.

The washers are a non-standard size that I can't find in DIY shops, so I had to call in on the plumbing firm that did the original installation, who gave me some for free (thanks, Lecoq). 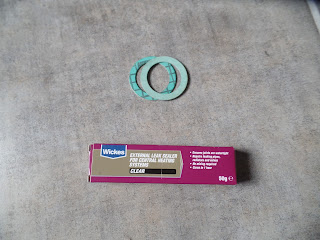 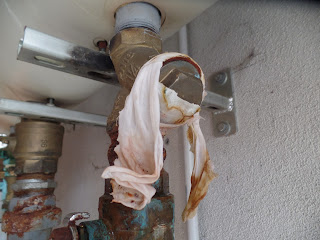 There are two joints of the same type in the system, so I re-did both at the same time, just in case, using also the same mastic jointing compound that did the temporary repair.   Here they both are with their bright new green washers.   I'll put the water back in the system later today or tomorrow. 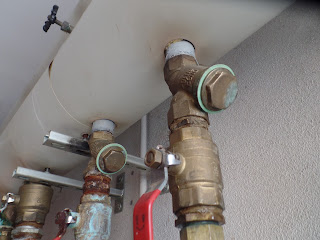 As part of the development of the site down the road, they will be installing an automatic barrier.  I'm on a walk today and I notice that they have installed some of the mechanism.  In the photo on the left, you can see on the left-hand side of the road, beside the bollard, the cradle that will catch the barrier as it comes down. 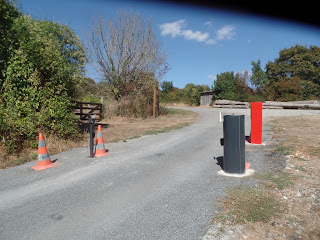 Well, it seemed simple enough.  A flute-playing friend of mine announced that she was in Le Mans, and her holiday route was taking her to Brittany.   She'd be passing by our place, so why not drop in for a coffee and a natter, maybe play some duets?

You know that things aren't going to be that simple, when she pulls up and you think "Ah, there she is...... what's that smell of petrol?"   Her car (a conversion to a campervan) bumped the gate stop in our drive, and the part of the car that hit it was the petrol tank, that split.  Petrol pouring out, an emergency bucket brigade was implemented to get the fuel to safety.

The car had been converted for wheelchair access (lowered) and then converted to a campervan.  As a result, it has a bespoke fuel tank that is the lowest part of the car at certain points.   A car with a broken petrol tank is going nowhere fast, but we got it to the nearest garage by means of a transporter.

Fortunately we could put my friend up for a few days while we navigated the nightmare of mutliple insurance companies, and decision trees trying to work out what to do in this event or that event, all while trying to get the car diagnosed and fixed.   The insurance companies were interesting too.  What do you think about a company that insures campervans, offers a "European Extension" to the policy, that offers you a hire car if needs be.... as long as your car is being sorted in an "Approved Garage"..... of which there are none in mainland Europe.  Ha!  Gotcha!   We did eventually get a hire car out of a different insurer, after multiple phone calls and three broken promises that they would call back.

We learn that welding metal petrol tanks is a slow undertaking: at least in France, you have to have a special approval as a welder, and rules require that the tank be washed thoroughly before any work can start, a process that takes a fortnight.   And today we are told that no welder here or in the surrounding towns is prepared to take on the job.

So at the moment, the car is in the garage awaiting a decision from the insurers as to whether it's going to get a new bespoke tank sent from England, or be repatriated.  Perhaps other options are under consideration.

My friend is currently enjoying the use of a higher hire car and is continuing her holiday in Brittany. 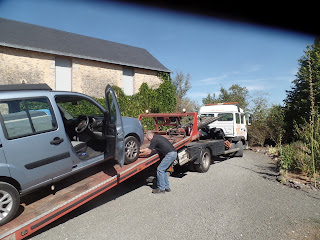 This weekend is the weekend of la rentrée, when all the French kids (rug rat =  le mioche) go back to shool, and the adults go back to work after their august holidays.  It's therefore the weekend of the "back to school" car boot sales, of which there were three near us.  We went to the biggest one, at Laval.  It rained.

To put this rain in context, we have to note that it hasn't rained here for at least 6 weeks (except for a little shower a couple of weeks back), and we've had a scorching drought, with temperatures up in the upper thirties; around 13°C higher than normal for this time of year.  The plants are suffering, there are restrictions and bans on watering.  The next rain that is forecast won't be until Friday.

And the rain wasn't the kind of rain that will do the plants any good; a light intermittent rain all morning, that will wet the top half-inch of soil and then evaporate off in no time.  But it was enough to put the dampers on the car boot sale; people had to cover their stalls with plastic or other watherproofs, or just watch their goods get wet.  And there were fewer buyers around than is usual, too.

However, we caught a few bargains.   I found a sit-up bench for the gîte gym, and a couple of DVDs for evening entertainment, some cheap reading glasses and a book on gardening.

Here's a picture of the event, taken from a roadside café, while we had a break. 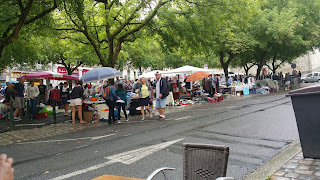