There is a track running around the back of the gîte that allows for the passage of vehicles.  However at one point, it turns sharply behind a shed, and this makes things difficult for long vehicles or those pulling a trailer.  Having gotten fed up with scraping my car, damaging a mudguard on the trailer, and knocking bits off the corner of the wall, I decided it was time to do something about it.

It took a little time to discover where a digger might be found, how little it might cost to rent it, and who might drive it, and so on, but once this combination of things was brought together, work could start.  I am always surprised at how much of a change can be effected by these diggers, but in a day, the area was transformed, and I now have a nice turning circle ready to be covered in gravel.  (Another challenge to find all the right ingredients, but not an urgent one) 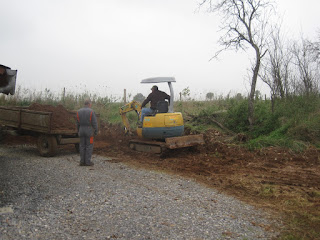 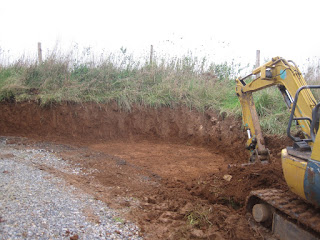 In the course of the work, a lot of soil was dug up, and since the area round here is stony, there were a lot of stones in the soil.  I have spend the last couple of days pulling large rocks out of the soil, and using them to build a retaining dry stone wall that will hold back the topsoil we dug out, and, I intend, make a nice lawn/flower bed one day.   The availability of the digger has brought this project forwards, probably by several years, and here is the before and after result so far. 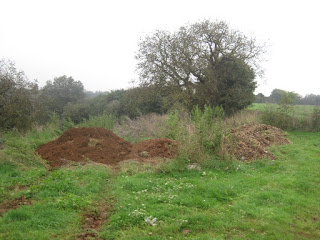 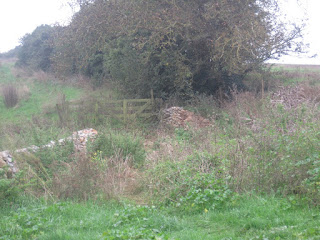 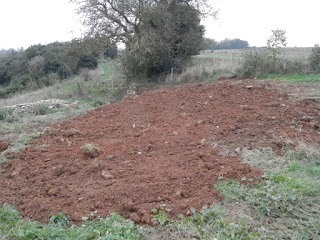 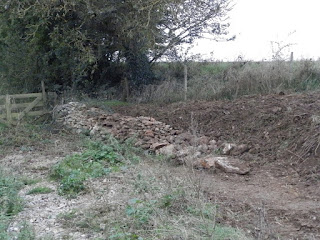 Meanwhile, the heavy rain has brought the Dahlias on, and they are giving one final flourish before the frost clobbers them.  We're hoping they survive the week until our next guests arrive for the All Saints holiday. 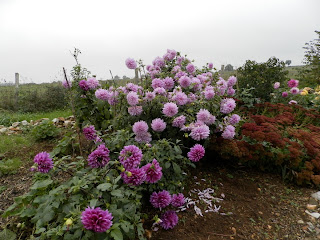 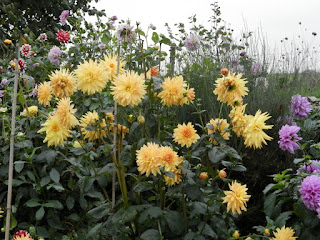 Posted by Mark In Mayenne at 03:25 5 comments: Links to this post

A walk in the local fields and woods yielded these pictures of autumn fruit, that I thought were quite pretty. 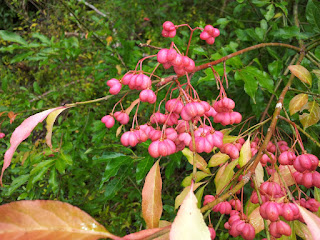 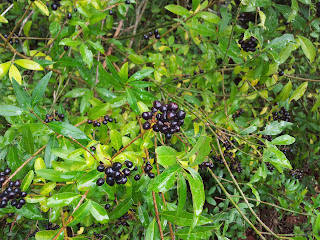 Meanwhile the squirrel continues to evade photographic capture, but this time only because I didn't have my zoom lens.   I'll get him one day.  Some earth-moving operations in the garden had me rescuing slow-worms and lizards all day.   Here's a lucky green lizard. 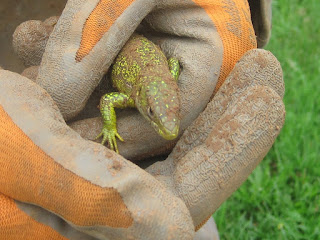 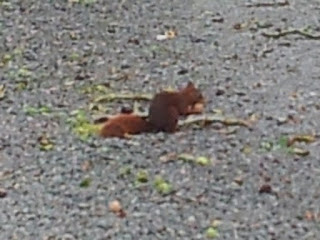 And finally, our classroom for french lessons displays a happy disregard for aesthetics in pursuit of a solution to lightbulb failure.   In fact there are four such bulb-holders in the room and they all have one spot and one candle bulb, so someone is doing this on purpose. 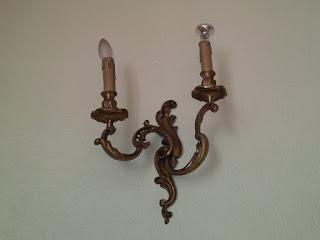 Posted by Mark In Mayenne at 09:03 2 comments: Links to this post

We were woken up early this morning by the sound of rain coming down like you wouldn't believe. What seemed like a moment later (but was in fact a few hours of sleep) we were woken again by a phone call from Marie who runs the restaurant in the valley. "It's flooded down here, can you come and take some photos for me?"

That might sound like a strange request, but there are plans afoot to move her restaurant into the mill beside the river, and there is some debate as to whether or not this building is liable to flooding. Since water mills tend to be beside rivers, and rivers can sometimes overflow, my money's on the "floodable" side of the debate.

Here are the pictures. The mill is built on a slope and the water comes up halfway along its length, so some of the inside is underwater. However all of the island next to it, where a terrace is planned, is submerged. This should give the decision-makers something to get their teeth into, at least. 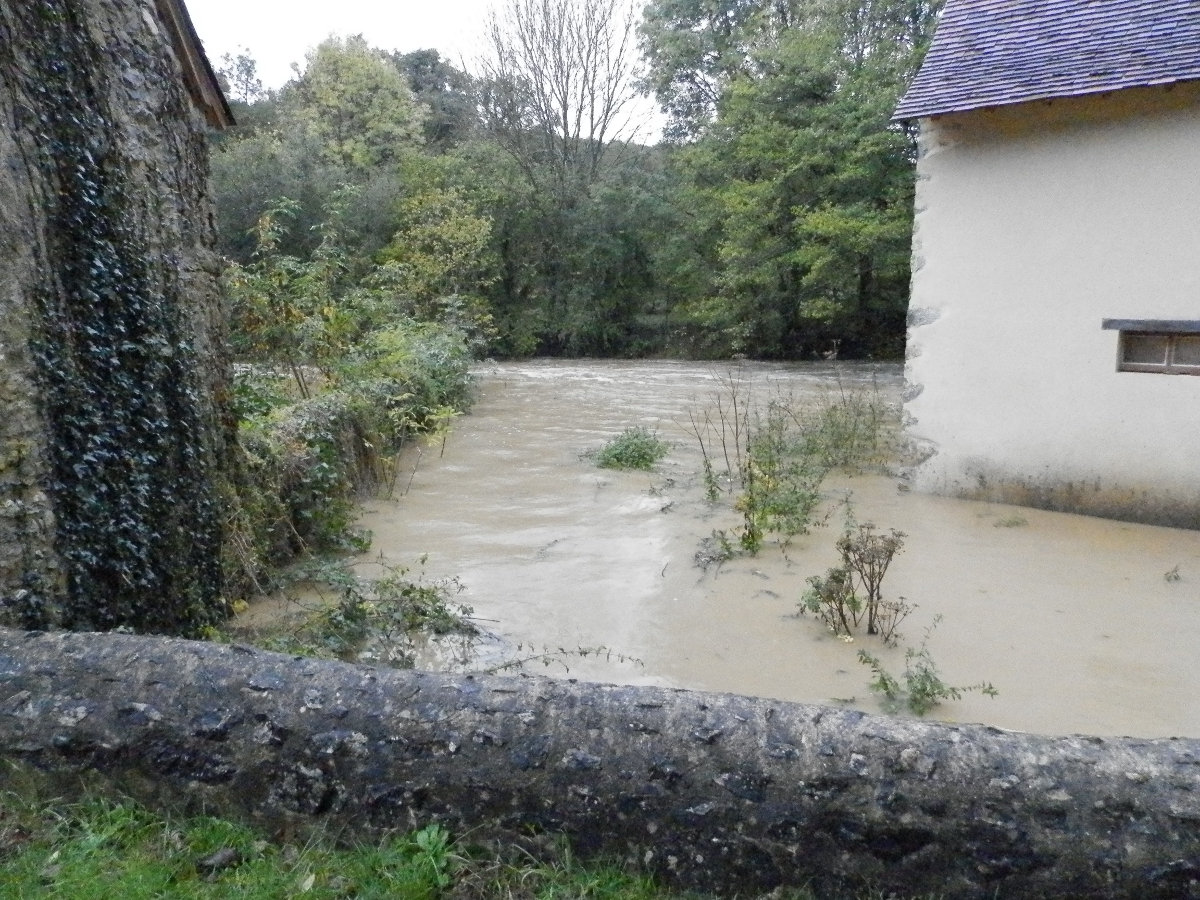 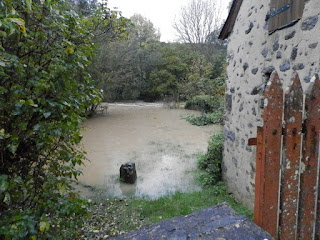 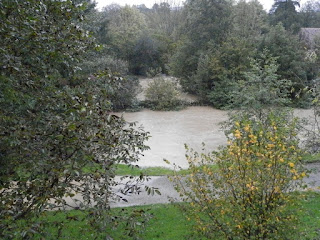 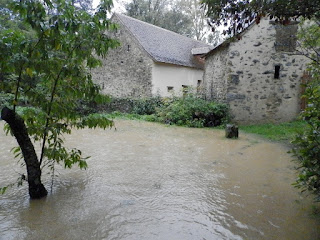 Posted by Mark In Mayenne at 01:18 3 comments: Links to this post

A short break in the not-too-far-away city of Orléans before the Autumn rain sets in and the frosts send the gardens into hibernation.  Although we trolled around the city, the focus of the trip was a visit to the gardens at Orléans-la-Source where there is a big (35 acre) Parc Floral. This is built behind a big chateau, and surrounds a small tributary of the Loire, le loiret.

The different areas are framed by mature trees, and the overall impact is of a space carefully planned and managed for family visits, child entertainment, educational school trips as well as for the plant enthusiast.  I felt that the maintenance was perhaps a bit lacking in some areas, but the garden was by no means scruffy.

October isn't really the best time to visit it, but I was pleased to see a big display of Dahlias, a plant that is close to its best at this time of year, as long as it hasn't been exhausted from flowering too much and has been regularly dead-headed.  I liked the system they had for staking them, too, with a square metal grid attached to a central pole.   Another reason to get myself some arc-welding kit. 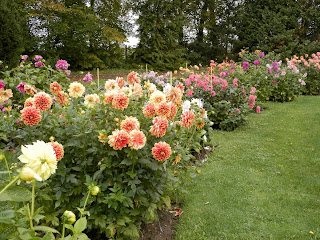 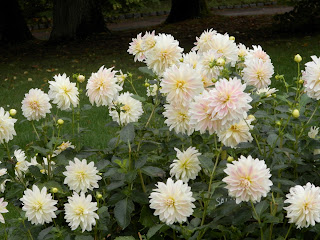 They had some very artistic but strange planters for the Fucshias, they look very much like they are designed to hang from something, but I bet they weigh a ton.  And I was quite taken by the pergodas they have built for climbing roses.   The rose garden was a bit past its best, but will definitely be worth revisiting in Summer. 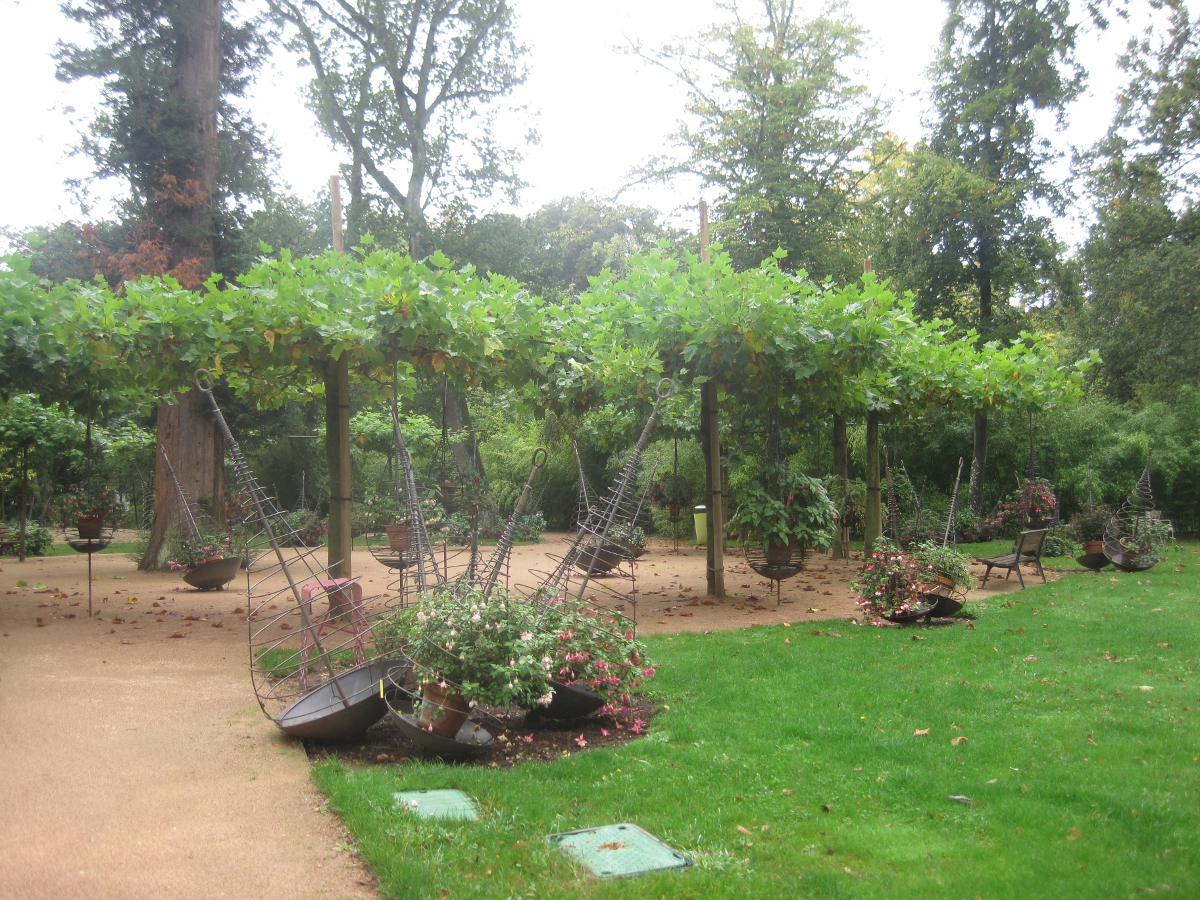 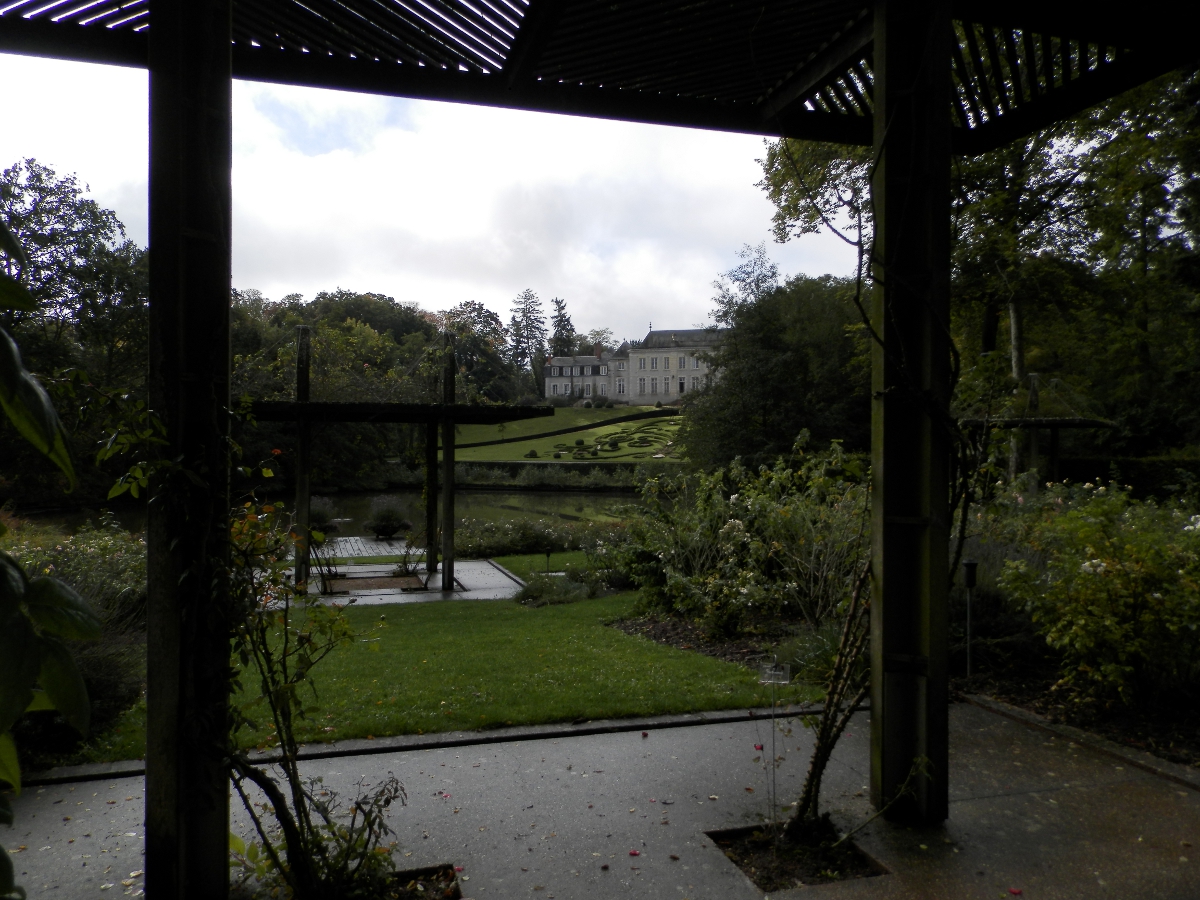 Posted by Mark In Mayenne at 03:52 5 comments: Links to this post 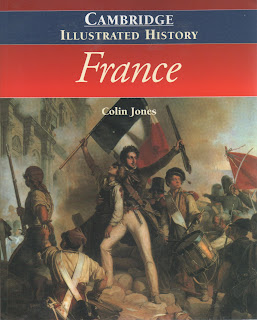 I thought, since I live in France, that it would be a sensible idea to read up a bit on French history, since I know very little of it.   After looking at various options and reviews, I settled on the book in the Cambridge Illustrated History series.   It's variously described as authoritative, well-written, a tour de force, etc., so I figured it would be worth a punt even at 32 euros. I haven't read very far into the book yet, but already the author's style is starting to irritate. A couple of examples:


The shift towards a farming existence is conventionally described as one of "Man's" greatest achievements. Yet.... the initial impetus came from women rather than "Man".

Now I wouldn't mind so much, but the use of the word "man" in this context denotes mankind, humankind if you prefer, or humanity, rather than men. Historians, had they meant that "the shift... was one of men's greatest achievements", would presumably have said so.  So we then have to wade through the author's tedious destruction of this straw man. I have the feeling that it's about needing to say "Look how PC I'm being, aren't I a good boy?".   Perhaps that's what it takes to get a reference book published these days, but I find it irritating.  All the author needed to say was


"The shift towards a farming existence is conventionally described as one of man(kind)'s greatest achievements, and the initial impetus came from women".

A bit later on in the book, we have this, when discussing the maximum population counts of some of France's (Gaul's) earliest cities:

Now the problem I have with this, is that I don't know what the author is trying to say: I have to guess.  It's the use of the word "exceed" together with a population "band" that confuses me.  If he means that the populations did not exceed 30,000, then he should say so, and there is no need to mention the 20,000 figure because it means nothing.  If he means that all the towns listed had population counts of between 20,000 and 30,000 then that's what he should say instead.  There are plenty of other possible meanings as well.  All he has to do is choose one and write it.

A final comment.  This is from the Cambridge University Press.  My alma mater.  Is this the best they can do?  The shame!!

On a more positive note, I haven't, for a long time, enjoyed any novel as much as I have enjoyed "The Girl With the Dragon Tattoo" and its sequel "The Girl Who Played with Fire".  Those dashed cunning marketing chappies at Amazon hooked me with a cheapo Kindle download of the first one, and, as they doubtless planned, I got hooked, and paid much more for the second.  I wonder if they have ever traded street drugs?  I'm going to have to wait for a rainy week to download the third one, since I can't put them down, and really should be in the garden as much as the weather permits.
Posted by Mark In Mayenne at 08:06 7 comments: Links to this post