We took a short break before the holiday season hits, at Port-Louis, in Brittany.  It is just across the water from Lorient, which port was so named (I learnt) because it was the departure point for ships owned by the East India Company, that were heading towards, well, the orient.  The Google Maps picture below shows the general area and includes the fort at the end of the penninsula that houses the museum of sea rescue.

Even today rescue at sea is a dangerous activity, despite the availability of rescue helicopters and other hi-tech that we take for granted.   The Penlee Lifeboat Disaster was not that long ago, and I remember that the national response in terms of charitable donations for the bereaved families generated so much money that Mrs Thatcher had to intervene personally to keep the Inland Revenue away from the beneficiaries.

The French equivalent of the RNLI is the SNSM (Societé Nationale des Sauveteurs en Mer) and the museum is dedicated to them, and shows how the techniques and equipment available for sea rescue have changed over the years.  I still find it impressive that people are prepared to go out in such dangerous conditions to rescue other human beings.  The first picture below shows a lifeboat powered by oarsmen and a sail.  Is that a scary idea or what?

We both spent some years as active and enthusiastic windsurfers.  Even though one takes every precaution, accidents can happen so I was always reassured to know that, at least in UK coastal waters, the RNLI was there in case it all went horribly pear-shaped.  They are funded purely by charitable donations (not a fake charity) and they get my contributions every time. 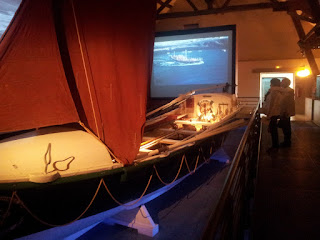 Agrandir le plan
Posted by Mark In Mayenne at 09:35 3 comments:

This last weekend, a whistle-stop trip to London.  Anita discovered that the Kensington Miniatures fair was on and we had no guests, so off we went.  Two days, filled.  For Anita, the minis fair, and for me a visit to my favourite flute shop on Saturday afternoon, then together, the new Star Trek film, and a Chinese dinner in Soho's Chinatown.  On the Sunday, a visit to the Harry Potter film studios and an Indian dinner at Chutney Mary's.  Then home on Monday.

When we used to live in Staines we'd visit the West End from time to time, and we'd usually eat at Yung's restaurant on Wardour Street.  No atmosphere but great food, always full of orientals. Occasionally we'd try somewhere else but always end up asking ourselves "why didn't we just go to Yung's?"  Yung's was gone.  Our disappointment was tempered by that fact that the random one we chose instead was also excellent, the fried squid in particular being the best I can remember having ever eaten.  Not that my memory is on top form these days. 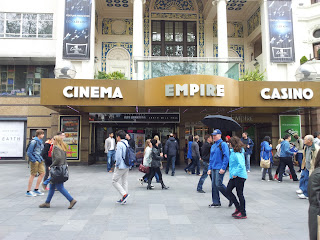 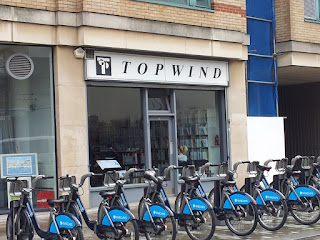 I have to say that I'm a fan of Harry Potter, or perhaps more accurately, I'm a fan, through her books, of J.K. Rowling.  I don't begrudge her her wealth one little bit, and despite the cries from the left for "less inequality", I just have the feeling that if she was less wealthy, we'd all be a bit poorer for it.  I was a bit ambivalent about visiting the exhibition, but it was superbly done, well-pitched towards children without patronising the adults.  You could see the creativity, enthusiasm and energy that went into making the films, and I came away pondering the observation of Khalil Gibran, that "work is love made visible".  Quite moving, in the end, to have it demonstrated. 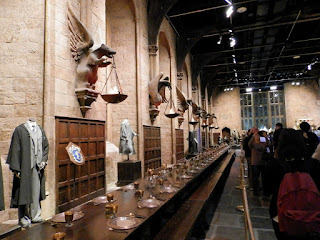 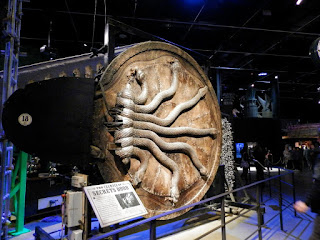 I first came to understand how wine can complement a meal when I had lunch at the museum restaurant at the Quai d'Orsay.  I don't normally drink wine at lunchtime, but had a glass of their recommended wine with a spiced chicken.  It was a perfect match in a way that is hard to describe and that I didn't know could be done.  I'm now always trying to achieve this sort of match for our customers, and Chutney Mary's were offering a "taster menu" with matching wines for each dish.  A "must".  Fabulous, even if it was using some New World wines that you can't get in France.  I won't claim it as a business expense though; there is no way you could serve food like that to the average French family - far too spicy.

I don't see the point in spending 75 quid on a nice terracotta rhubarb-forcing cloche, because I'm not going to consume 75 quid's worth of rhubarb before I die.  I might as well buy it (the rhubarb) in a supermarket.  For the same reason, I am reluctant to spend 20 quid on polythene cloches for lettuce that doesn't cost very much.

Down at the local garden centre, they were flogging plastic cones for protecting tomato plants.  Shaped from a sheet of plastic and curved into a cone they were 18 euros for three.  Give me a break.

But I do need to plant out some tender plants.  I have augergines growing from seed, and tomatoes that will need to go out soon and that will need some protection.  So I resolved to make some little frames around which I can wrap some bubble-wrap to keep the cold away.

Here are the frames, made from a square of wood and 4 steel rods used for concrete reinforcement.  It cost me 6 euros for the three.  And here they are, protecting my newly-planted aubergines.  Such elegance, style, panache! 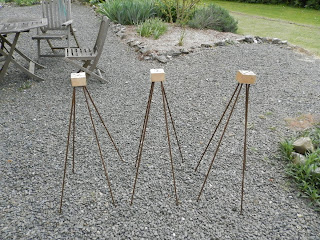 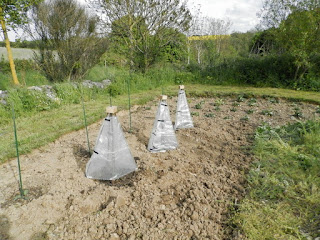 There are three key ideas that enchant the French at the moment: socialism (often expressed as solidarité), green consumerism (éco, for écologique) and organic foods (bio).  Politicians' antennae are, of course, exquisitely tuned to detect what they can get away with without causing a revolution.  The CSG is a tax you pay on all your income, over and above income and capital gains taxes, introduced as a "temporary" measure in 1990.  The "S" stands for sociale.  The ISF is the wealth tax; the "S" in this case stands for solidarité.

A hare-brained scheme to hike the electricity prices for those who "overconsume" was prompted by the fact that the electricity distribution network here is full to overloaded, but was announced as an ecological measure.  And so on.

There is a holiday campsite near us, recently opened and based around disused lime kilns and their associated limestone quarries now filled with water.  It calls itself echologia, presumably to make us think it's eco-friendly, rather than (say) that the lakes are filled with E. Coli.  They were having some kind of open weekend, with hot-air ballon rides (not eco-friendly at all) and radio-controlled model aircraft  (also not eco-friendly).  We went to take a look.

So, it's a holiday campsite built around disused lime kilns and lakes.  It's been nicely renovated in parts, and the log cabins beside the lakes (and those actually floating on the lakes) look attractive if you want a basic holiday in the country.  There are yourts and teepees in a field that you can rent if you prefer.  Onsite there is also a restaurant by a lake, a shop and snack bar. 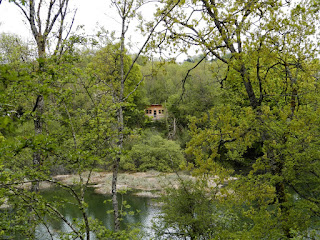 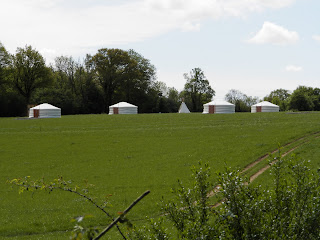 The concessions to ecology seemed to be in the dry public toilets (they didn't smell like I feared they might, but don't look down) and in a wet sewage treatment system using reed beds.  There is a marked path around the site with various informative notices telling us about the wild creatures that live there but that you can't see. They tell us that the collared grass snake is a protected species, but the common hedgehog is apparently very protected (must be the spines).  I did actually learn that another local grass snake is a constrictor, which I would never have guessed, so the pedagogical aspect wasn't entirely wasted.  The views of the lakes were quite spectacular (though if one swims in this one shown, one apparently risks death by hydrocution - a heart attack brought on by sudden immersion in cold water) and the river, where it runs throught the commercial zone, is nicely managed. 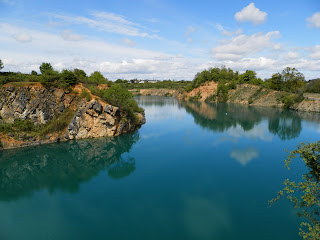 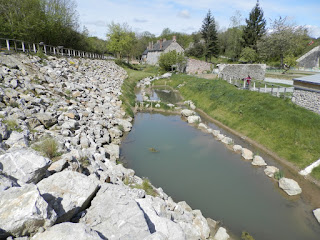 There are eco-friendly killing systems that you can try out (costs extra), but the goats are not to be used as targets.  I think they're there for cheese-making.  Or maybe goat-breeding. 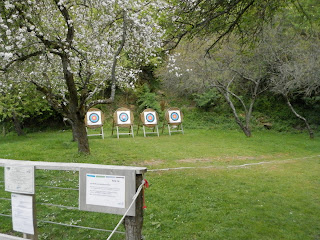 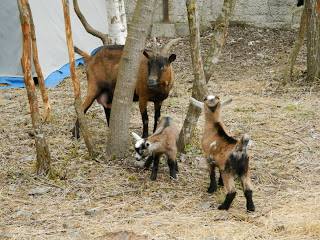 As a place to holiday?  I imagine the log cabins are comfortable, but the yourts and teepees are stuck in the middle of a field; not very isoltaed or sheltered. You're not allowed camp fires to cook by your teepee or yourt, the restaurant on site is not cheap, and it's a good 15 minute drive to the nearest McDonald's.

For all I am criticising the place, it was a pleasant afternoon out.  The track around the installation is well-laid out and offers a quiet walk of a couple of kilometers with fantastic views of the lakes and river running through.

Anita runs a great cuisine here; our guests are usually delighted with what we serve.  We have tried all sorts of dishes during our time in England, and we learn a lot from eating at other restaurants.  It's a great way of finding new presentation techniques and ideas for recipes or combinations of dishes: we frequently incorporate discoveries into our menu.

So today we had lunch at a very nice restaurant just west of Laval, run by a couple who, we discovered, live not far from us.  Very nice it was too.  We made sure to choose different dishes, and we came away with some ideas for things to try.  The view from their terrace over the adjacent lake was fantastic; I imagine it would be fabulous to eat outside in summer but the weather kept us indoors today. 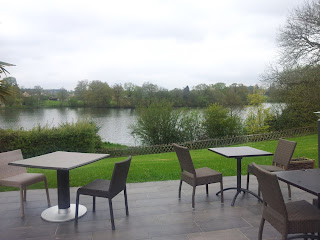 I must remember to ask if we can claim accommodation away as a business expense, evaluating the competition.
Posted by Mark In Mayenne at 10:45 5 comments: