I'm sure there's a deeply philosophical comment to be made here, but perhaps the picture speaks for itself. 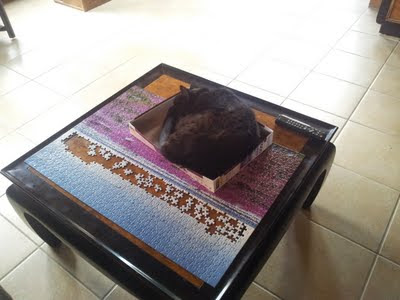 We've had really strange weather this year. We've had hot spells, so that some of our newly-planted trees, that haven't got much root depth yet, are struggling. But we've had so much rain that some of the tomatoes are rotting. And the Spring heat wave meant that the strawberry crop was poor at that time, but I have gathered a nice strawberry harvest today. 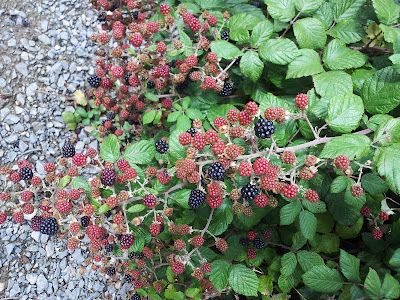 And the blackberries are also nice and fat and ripe, free for the taking from hedgerows as you pass. 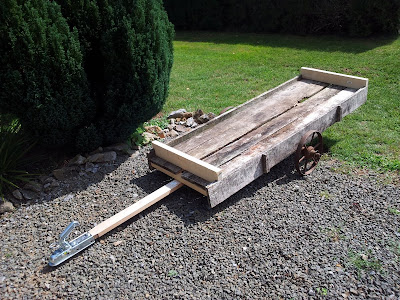 The famous cart has a new lease of life: notice the new strong cross-bracing. The first time I tried to take it anywhere loaded up with water containers, the handle snapped off. So I think I'm going to reinforce it with metal. It'll look like an armoured tank by the time I'm done. 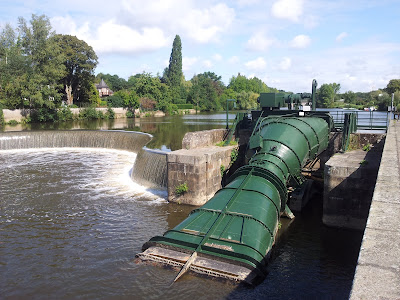 We were out on our bikes along the Mayenne recently. Many of the locks between Laval and Mayenne have little hydro-electric generators. Sounds like a good idea to me. Some have two side-by-side, some have only one. I wonder why the difference? 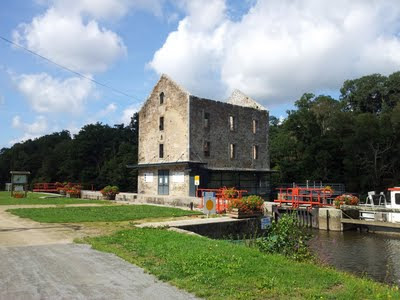 Also along the Mayenne river are some abandoned water mills. Except that they're not completely abandoned. Instead of a roof at roof level, they have roofs inside, even sometimes covering only part of the floor area. It's a pragmatic solution, I suppose, if you don't want to maintain the whole building. 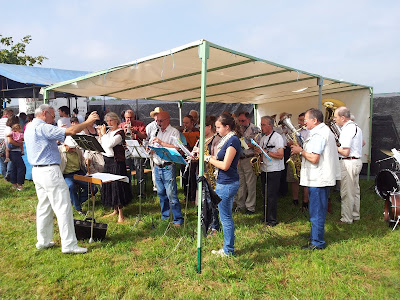 It's village fête and car boot time again (village fêtes always seem to have a car boot as part of the deal). This time I bought a nice car battery charger at St Suzanne for 10 euros. You can get them on eBay for 12 pounds or so, plus postage, but here in the shops thy're upwards of 30 euros. Good bargain. At St Denis d'Orques there was the local wind band playing too. My friends Jill, Gabriel and Raoul from St Suzanne play in it too. Here's a picture. They're under the tent bacause it's raining. I guess you don't want to have the rain collecting in those tuba or baritone things, you'd be blowing bubbles in no time.
Posted by Mark In Mayenne at 07:59 1 comment:

We are endowed with a fair share of reptilian wildlife around here. Slow-worms, grass snakes, various kinds of lizards, and adders. Adders like to shelter under rocks, or sun themselves on top. As it happens, I have been working on my dry stone wall recently, and that involves moving a lot of rocks.

Now I don't mind adders in full view, where they are easy to spot. They are shy, and as long as you don't annoy them, they will disappear to safety rather than bite. But I'm not so keen on adders in the undergrowth, because you can't see them, and an adder stepped on is likely to think it's under attack and therefore to respond in kind.

This adder came to my attention yesterday, when I found it under a rock. It's easy enough to see in the first photograph, but it is present in all three pictures, though harder to spot in the other two. How quickly can you find it? That's what I'm worried about. 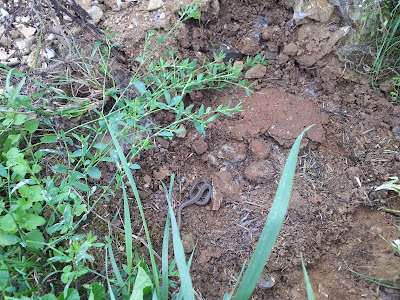 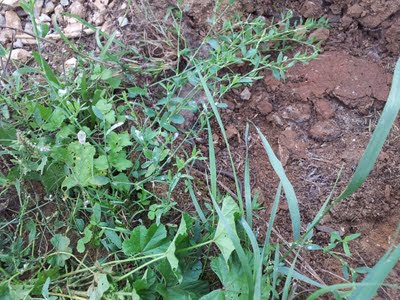 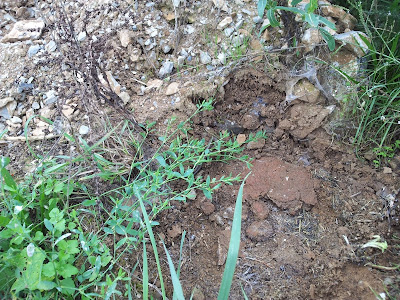 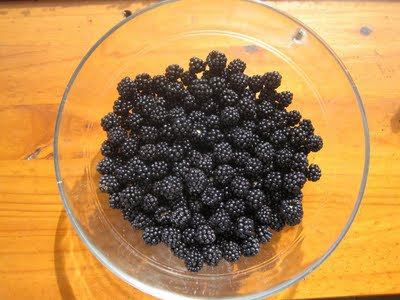 Five minutes outside by the blackberry bush yielded these blackberries that were turned into a very nice tart one evening, and a dessert with muscarpone cheese the evening after. Yum! 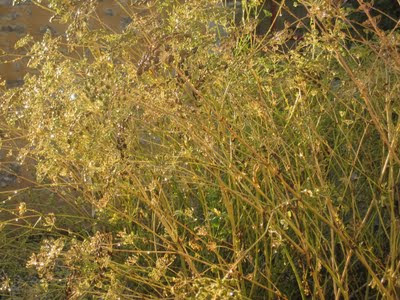 The Parsley has run to seed so we should have plenty for next year. 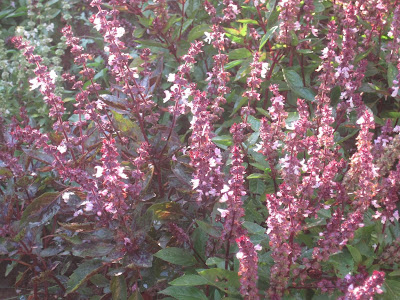 And the Sage is being decorative and providing food for bees, it seems.

We have had strange weather this year. A dry heat wave in Spring, followed by mild rainy weather with occasional sun. This has conufsed the flowers in the garden; they're not sure if they should be flowering or not. Here's some that are. 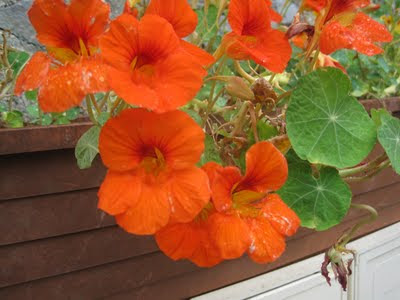 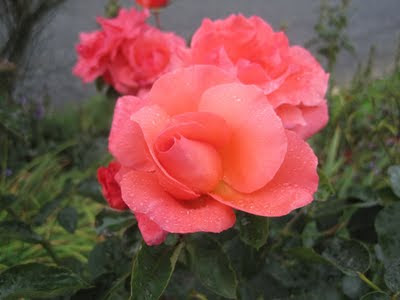 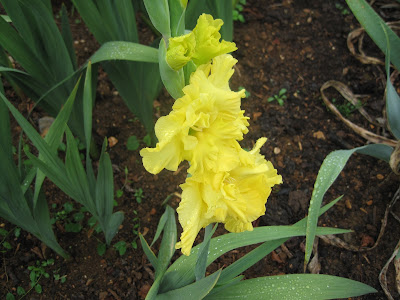 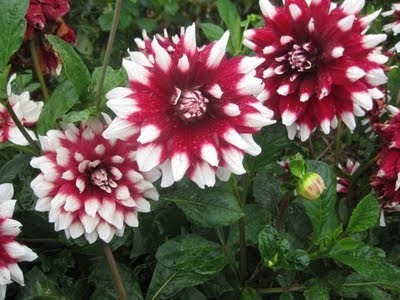 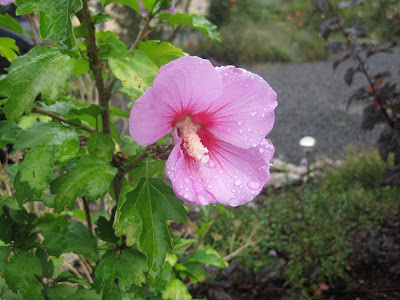 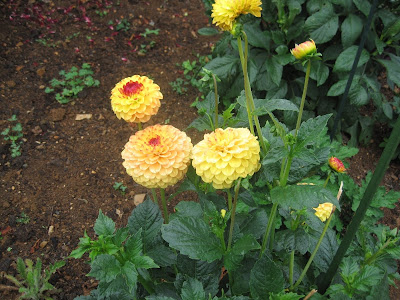 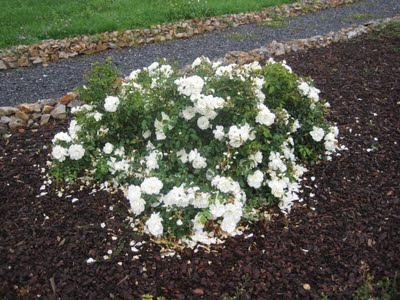 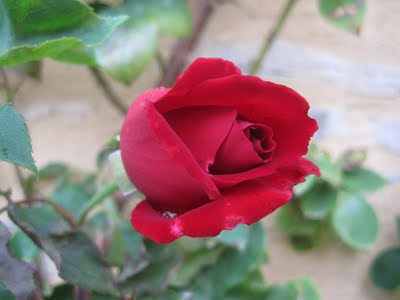 Posted by Mark In Mayenne at 07:40 No comments:

The website for the Opéra de Baugé tells you more about the organisation than I can in this blog. We went there recently with some friends to see Beethoven's Fidelio. And A fine experience it was too: The opera itself was excellent, it was good to see friends from England again and the pic-nic on the lawn during the interval was fun. To add a special interest, the daughter of one of the friends was playing flute in the orchestra. I remember her when she was learning.

We made a day of it, visiting the castle in the town of Baugé itself, before wandering off to the opera that was in the grounds of a manor house just on the edge of the town. Here's some pictures: the castle, the pic-nic lawn, and a couple of photos I took in an abandoned greenhouse and shed: a vaulted brick roof, and a stack of flower pots. 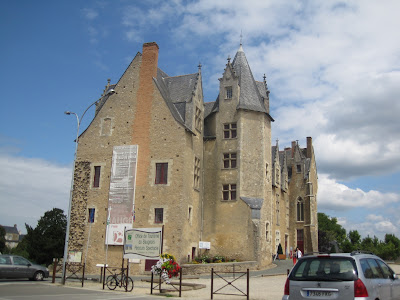 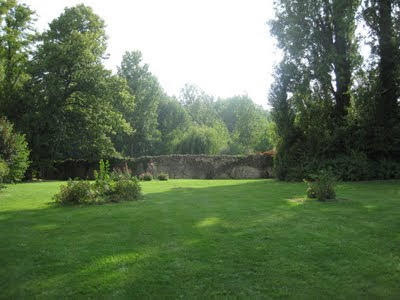 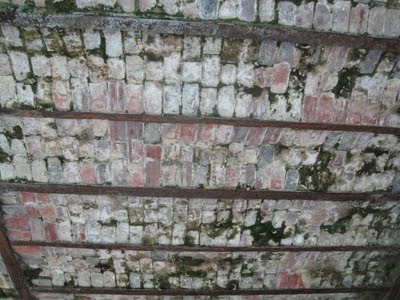 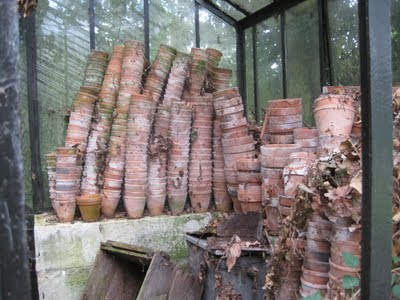