When the buildings were renovated here, a number of oak beams were removed.  Some were used elsewhere in the renovations, but some were left over. I have been storing these left-over beams for a while, being convinced at the start that I could do something useful with them.  They have been sat outside in the garden gathering woodlice and rot ever since.

After 5 years I decided that if I hadn't done anything with them so far, I was unlikely to ever, so it was time to get rid of them, and I decided to cut them up for the fire.  Now old oak is tough, and hard to cut, and my little battery-powered chain saw won't cope.  I could, in principle, borrow a big, powerful chain saw from a neighbour, but there are some nails in the wood and they make mincemeat out of chain saw chains.  I really don't want to have to repair a friend's chain saw for him and apologise for having needed to.  I asked at a local tool hire shop about hiring one: I could hire a 50cc petrol 2-stroke for the day for 50 euros, and if I damaged the chain, 30 euros more to replace it.

In the local supermarket I came across 2 Kilowatt electric mains-powered chain saws for sale.  Made in China, cheap as chips, built to a price, but functional.  54 euros.  I figure it costs about the same as hiring one, has about the same power as a 50cc petrol one, and assuming it can do the job, even if I damage the chain, I will have a chain saw at the end of the day for about the price of a rental.  Done deal.

I cut the beams up this afternoon, and I'm pleased that the new chain saw was well up to the task.  I had to sharpen the chain a couple of times, but it made short work of the old oak.

Incidentally, you can see from the picture how oak rots when it gets wet.  The wood tends to fissure naturally, from the outside in, and then water can flow in towards the heart of the wood, where it slowly causes decay.  In unfissured wood, I usually find that any rot is confined to the outer centimetre or so, and the wood is perfectly solid farther in. 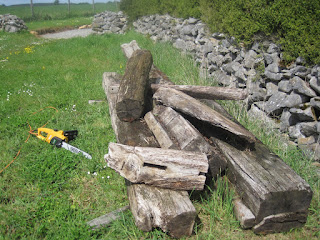 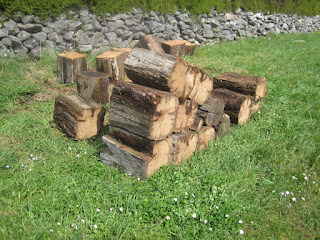 We had some chilly weather this Winter, with temperatures down to -15°C some mornings. Most of the time the ground was covered in snow, so there was some protection from the fiercest cold and strongest winds. None the less, all of the three Ceanothus plants dotted around show frost damage, and the little Bay tree will have to regrow from its roots again this year. I will move them both to more sheltered locations this Autumn (assuming that they have in fact survived) but I am running out of sheltered spots. 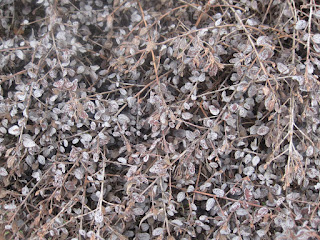 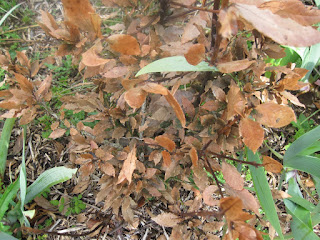 This cold was followed by a 4-5-week-long unseasonably warm spell that caused the garden to grow vigourously in February/March.  This brought forward the daffodils, that were promptly clobbered by some sharp frosts.  I didn't know that daffodils could get frost damage, I thought they were pretty resilient, but it weakened the flower stems so the flowers didn't open very well, and most of them fell over.   The Canna lillies that somehow managed to survive in the ground also started sprouting, but their shoots too have died in the frosts.  I am expecting them to recover though; the roots are clearly healthy and I am sure they will sprout again.

Meanwhile there is colour in the garden.  These pansies are self-seeded, forming a cheeky carpet of flowers where they really shouldn't be.  But who's complaining?  The blue grass is a bit invasive, so I am going to have to move it, probably this Autumn.  The Aubretias were grown from seed, and this clump comes from what was left in the seed tray after I had planted out all the "good" seedlings into their "right" places.  And these wild cowslips are blooming at the foot of the big Walnut tree. 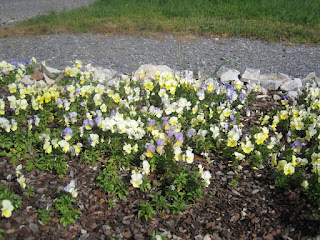 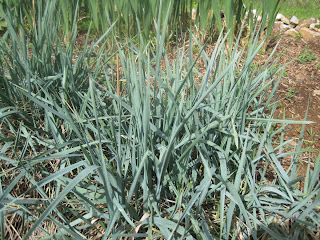 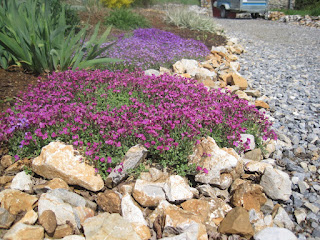 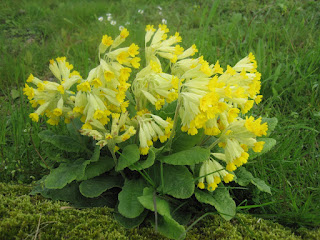 I am particularly pleased with this Broom plant, that seems to be establishing itself happily in its allotted place.  Seeing how well it is doing, we bought two other Brooms this Springtime to plant elsewhere in the bed; a cream-coloured one, and a pink one.  Apparently you can propogate them from semi-ripe cuttings so I will try that too, later in the year. Oh, and a free pic of the Photinia Red Robin that is finally managing to grow. 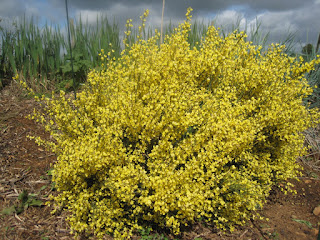 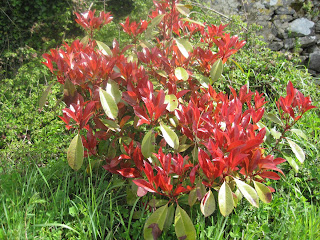 Posted by Mark In Mayenne at 04:12 No comments:

This little scene caught my eye at the dinner table. 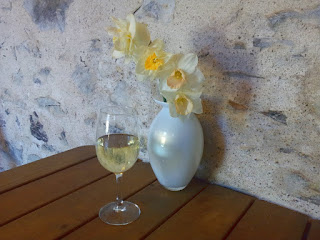 It was the night of the Ste Suzanne Harmonie's Spring concert on Saturday night, in the church of Ste Suzanne. A programme notable for its solos.  We had a movement of a Mozart horn concerto, an Ave Maria by Caccini featuring a flute solo, and the theme from The Man In The Iron Mask, also featuring a flute solo.  The Caccini solo was given by our newest 14yo flute player.  A great chance for her to play to an audience, in front of a bunch of supporting musicians.  Rare in England I think but not exceptional in France. 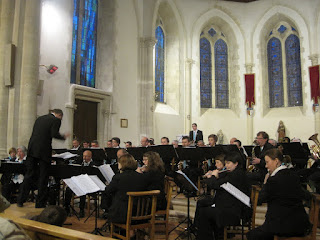 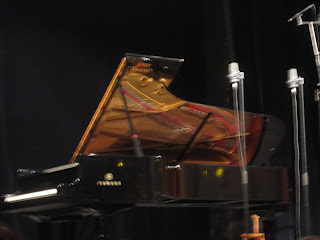 Posted by Mark In Mayenne at 10:58 No comments:

One thing: Physics of fluting 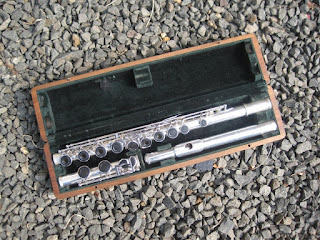 This is my flute.  Nothing too impressive to look at, sitting in its box, but I love to play it.  This one is made by Stephen Wessel, a clarinetist, model aircraft enthusaist and metalworking artisan who lives in the South-West of England.

Stephen has chosen a selection of materials to make his flutes.  The body is in solid silver, although you are not allowed to say so, since it's not hallmarked.  The mechanism is in stainless steel for lightness and strength, and the keys are made of resin, again for lightness.  The idea is that the lighter the mechanism, the easier it is to make it move and stop.   I also like the combination of colours; silver, grey and black, altough they're not easily differentiated in the photo.

The flute is not a very efficient way of converting the energy of breath into sound.  With a reed or brass instrument, all the energy of your breath ends up in the instrument, and is, at least in principle, available to be turned into sound.  With the flute, you blow across the hole, and a lot of energy just dissipates into the surrounding air.  Therefore the flute mechanism has to be very accurate; there is no room for leaks.  Stephen hand-makes the screws on this flute with a fine pitch to their threads, so that the mechanism can be adjusted very precisely.

The flute makes a sound by being made to resonate as a tube that is open at both ends (see figure A below).  This means that the lowest frequencey (the "fundamental") that the tube will resonate at corresponds to a sound wave twice as long as the tube.  (The tube contains half a wavelength)  Higher frequency resonances are possible, where the tube length is 2, 3, 4, etc half-wavelengths long.  Figure B shows the tube resonating at the next highest available frequency (twice the frequency of the fundamental) where the tube is one wavelength (i.e. two half-wavelengths) long. 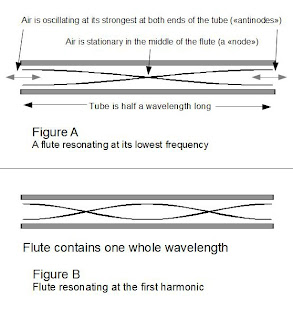 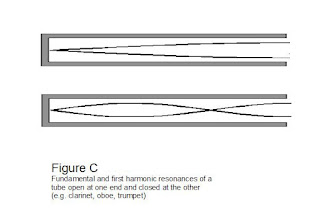 When you play a 3-octave flute, blowing a given length of tube will therefore, (with minor adjustments to fingering) give you three possible notes, each one an octave higher than the adjacent lower one.   In between these octaves, the pitch of the note you play is set and adjusted by changing the effective length of the tube.   The body of the flute is equipped with holes at various intervals, that are covered, as necessary, by keys.  Holes are closed from the blown end progressively, creating a correspondingly longer and longer tube, generating lower and lower notes.  The first hole that is open to play the note "C" is called the "C" hole, and the key that you use to close it to play a "B" is called the "B" key.  Thus the "B" key covers the "C" hole, a confusion that is inevitable, like 19th century dates starting with 18.

The action of closing a hole is fundamentally different from opening it.  If you tap a tube it will ring, (see, for example, tubular bells) and if you tap a key hard down onto the flute, the flute will ring to the corresponding pitch, even if you are not blowing it.  One of the aspects of learning to play is to get a descending scale (where mostly you close holes) to sound as smooth as an ascending scale (where you mostly open them).  What makes it worse is that if you slowly close (or open) a hole whilst blowing the flute, at one point the flute simply stops playing and you get a mish-mash of noise instead of a note.  You have to close the hole quickly enough to avoid this, to get a smooth transition between notes, but not so fast that the key 'taps' the flute.  The flute is not naturally a legato instrument.

The flute has an almost constant diameter along its length, a constraint that arises from the need to achieve good tuning across its three-octave range.  A tube of a given diameter will resonate differently as its length changes.  Another aspect of learning to play is to achieve a uniform tone across all the notes whether they are generated by a short tube or a long one.

Since it is a human trait to play musical intruments to the limits of human capability, and since flutes are less efficient than other wind instruments at converting energy into sound, it follows that they don't play as loud.  They just about hold a place in a modern orchestra amongst much louder intruments, but the flutists often complain that they can't be heard.  The flute doesn't play especially softly either, (most of the sound escapes the two ends of the tube rather than being reflected back down it to create the resonance) unlike say a clarinet that can make a sound on the threshold of hearing.  It is a common complaint levelled at flutists that their music lacks dynamic contrast.  Or any contrast at all in fact.  Fair cop.  It's hard to do, but can be done.

The flute has one key per finger, and you hold the flute such that each finger is right over its corresponding key. (Except the right-hand thumb that is used to balance the instrument, and the right-hand little finger that has three keys)  With a few exceptions, every note on the flute can be achieved by moving one or more fingers no more than 2-3 mm, the distance necessary to move a key to close a hole.  This is why the flute can give a flurry of rapid notes that is difficult for any other instrument to match.  One aspect of learning the flute is the elimination of finger movement beyond that which is strictly necessary.

So why do I play this thing?  It's hard to play loudly or softly, hard to play legato, hard to play in tune (more later), wastes breath and needs regular servicing to keep the delicate and precise mechanism in good order.  Because I love the sound it makes.  I make no special claims to skill, and it doesn't happen very often, but I have silenced a room full of talking people, and stopped people in their tracks, when making a noise with this thing.