None of the above

First, a confession:  I didn't vote in the Brexit referendum.  There.  But I have been happy with the result - the vote was for an exit from the EU.  I have been dismayed by all the prevarications that have gone on since, as politicians and civil servants of every hue try to thwart the outcome.  So I made the effort to apply for a postal vote in the upcoming elections, to make my position clear by using my vote.  I got my ballot papers yesterday, and there is no brexit candidate.

There's the lib dems, who want a second referendum on the negotiated deal.  The problem with that is that Boris's surrender document is even worse that May's, so remaining would be better than leaving.  In the event of a referendum to take the current agreement or remain, I'd have to vote remain.  So I can't vote for a candidate for a party that would want to overturn the will of the people in this underhand way.   My cynical nature tells me that in the event of a second referendum,  they'd probably try to split the leave vote in order to declare a victory for remain.

There's the greens, who want to plant trees and reduce pollution.  These are good aims in themselves, of course, (I planted some trees yesterday) but are irrelevant to this election.

There's Labour, but Corbyn as PM is a nightmare I prefer not to dwell on.

The tory candidate seems to be a good guy, intelligent and well-educated by all evidence, with a senior rôle in government.   He would normally get my vote. But he has supported Boris's deal at all points, and it's exactly that deal that is the problem.

There is no Brexit candidate, so I am unable to vote for what I want.  This reminds me of the elections in Communist Russia, where all the candidates just happen to be communist.

I have some experience in debugging and fixing problems with tech equipment such as computers.   In any investigation of a problem, it's important to know exactly what things you know to be working correctly, and those that you're not sure about.  So whereas I might use, for example, a wireless mouse on a day-to day basis, I always keep a spare wired mouse that I know to be working, because there are two (extra) points of failure on a wireless mouse: perhaps the wireless connection is not working for some reason, or maybe the batteries (that it necessarily carries since it doesn't get power through the wire,) are flat.    So if I am testing or setting up a PC, I always use a wired mouse and keyboard.

Being in France, I use an AZERTY keyboard on all my PCs, since it makes the special characters like é,à,è, ê etc more easily available, but I have an ancient wired QWERTY keyboard lurking in the cupboard.  This came to my aid recently.

I use a Dell PC for running music software.  It came with a nice wireless keyboard and mouse.  It was configured with an SSD system disk of 128GBytes, and 8GBytes of main memory.  The system disk was too small for the software I want to run, so I upgraded it to a 1TB SSD.  No problems.

I decided to do the same with the memory and upgraded it to 32GB.  Problem.  When the system was doing its Power-On Self Test (POST), I got an error message, to the effect that the memory configuration has been changed, and did I do this on purpose, or do I want to re-seat the memory,  Yes or No?   It's a reasonable question, and probably useful in some circumstances, but the problem is that at this point, Windows is not running, so the Windows drivers for the wireless keyboard are not running either, so the keyboard isn't working.    And since the Dell came with a wireless keyboard only, I had no way of responding to the question.

So my ancient 20-year-old QWERTY wired keyboard came to the rescue.   I plugged it in, typed the response and off we went.   (It's worth noting that the POST software is also programmed for a QWERTY keyboard only)   But if I hadn't had the keyboard I'd have had to beg, borrow or buy one to get past that little hurdle. 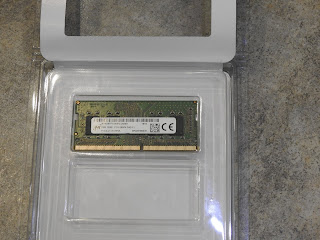 Posted by Mark In Mayenne at 07:15 No comments:

I planted some chilli pepper seeds last Springtime, I got two plants that I grew to maturity outside in the veg patch.  Both plants produced some fruit; chilli peppers shaped a bit like lanterns, and yellow when ripe.

I learnt something new; when the fruits were green, they weren't hot, and tasted more like sweet bell peppers than anything else.  The Winter frosts are here, so I have picked all of the unripe fruits and I am hoping that they will mature off the plant.  They are certainly turning yellow; I will have to test to see if they get spicy hot as well. 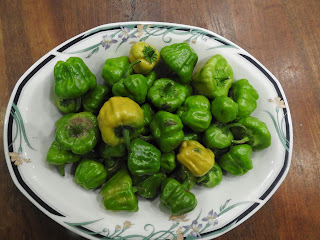 P.S.  *strangled voice*  I can confirm that the chillis become hot when they turn yellow.  *cough*
Posted by Mark In Mayenne at 07:52 2 comments:

Pizza delivered or not

I note this, because it's the first of its kind that I have seen in France, or anywhere.   A pizza vending machine, installed on the outskirts of Evron, beside the main road.  It's promising hot pizza with just 3 minutes' wait, or frozen pizza in 30 seconds if you want to heat it yourself.   I wonder if it will be a success.  Staff costs should be low, at least. 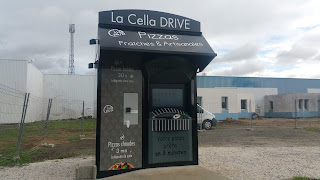 We bought a Rowenta battery-powered vacuum cleaner a while back.  We've been happy with it, but it developed a fault: the electric motor in the cleaning head worked only intermittently.  It took us a while to identify the problem, since we thought it was most likely to do with the contacts in the demountable tubes.

Surprise!  It was still under guarantee, so we took it back to the shop.  It'll be  6-8 weeks they told us, so in the mean time we reverted back to the mains-powered cleaner.   To fix the problem, they gave us a new motorised head; a newer model that's better than the old one - quieter but just as effective.  A good result. 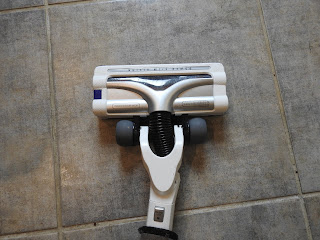 One little black spot: we bought the cleaner in Leclerc in Laval, so it was to their after-sales desk that we took the faulty motor.  After the specified delay, we called them to ask where the cleaner was.  Turns out they'd had it for a while.  So why didn't they tell us?

- There's no mobile number for you.
- But there's a fixed line, and it has an answering machine
- Oh, so there is.

Is gorm a word?  Whatever, it seems the staff were lacking in it.