We've just spend a few days on a short break to La Rochelle, a port on the west coast, now mostly a holday resort.  I wasn't impressed at first look; a bit industrial and a bit built up, but it grew on me and I'd be happy to go back and explore more.

The first evening we saw this chap making his way from the shore to his boat.  I can't remember when I last saw single-oar sculling, but he was good at it, going at a reasonable pace and more or less in a straight line. He had a creative way for getting downwind, too.   Unfortunately he lost all his cool points as the wind took him past his destination pontoon, and he had to scull like crazy back upwind to gain his target. 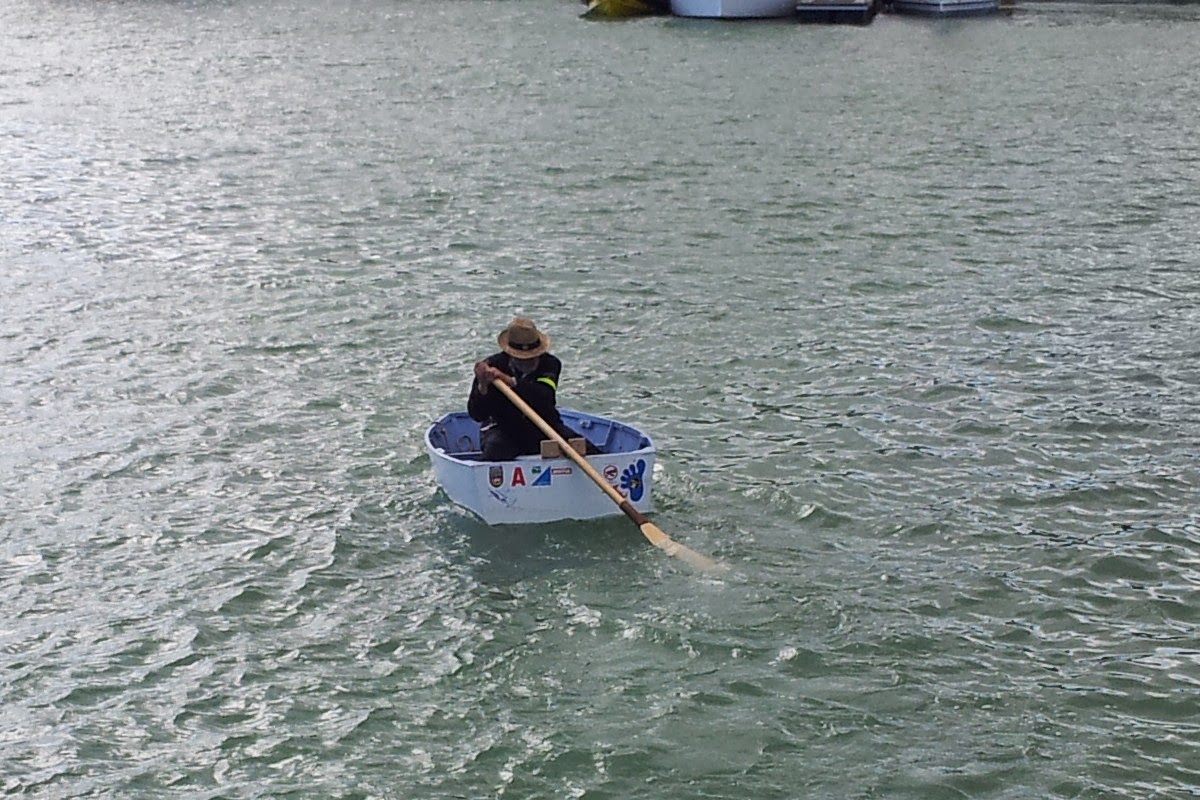 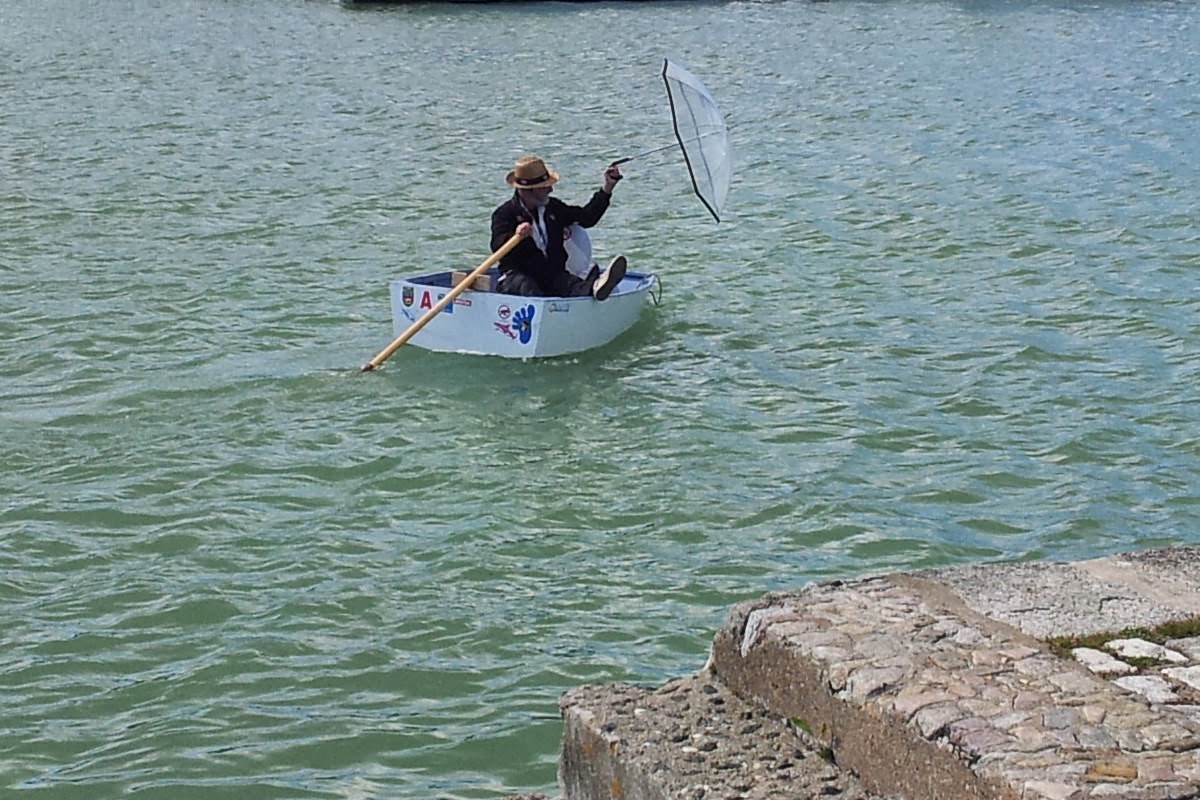 I was told by a French client at the gîte, that the following joke is told by francophone Belgians against the French:

Why is it that when the Belgians answer a call of nature they go to "la toilette" (the toilet, singular) but when the French do, they go to "les toilettes" (the toilets, plural)?   It's because in France you have to check out several before you find a clean one.

I suspect that this is an old joke, and perhaps it was more true in the past than now.  But yes, I do sometimes find French toilets in a bad state, and the dreaded squat bog still lurks in some surprising places.  (Have you ever seen a clean one that wasn't new?) 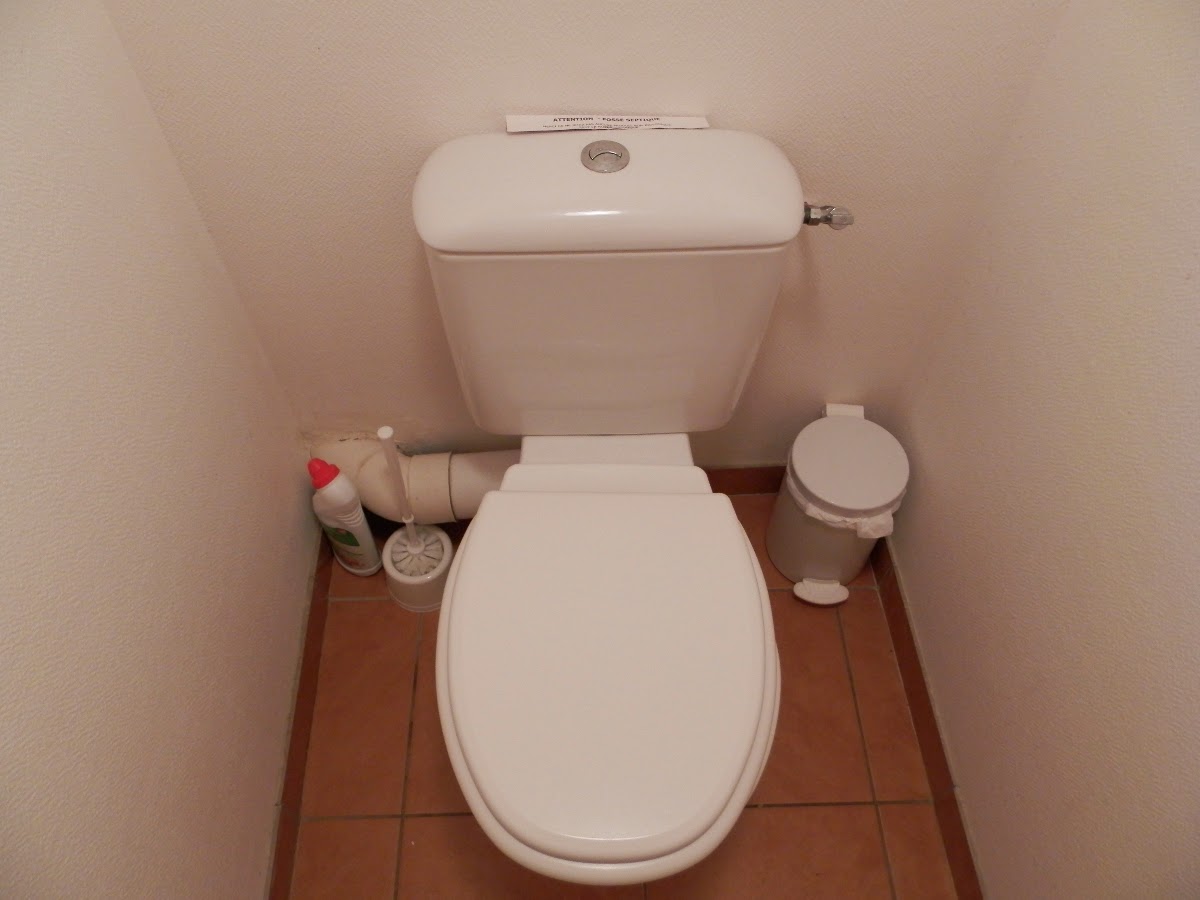 There are 11 toilets in the gîte and I make sure that they're all clean after each group of clients has left.  We're on a septic tank here, though, and despite notices to this effect, people still flush non-biological things down the loo.  These sometimes get stuck, like happened the other day, and when the guests had departed the routine cleaning revealed an incipient problem.  It was easy enough to sort out, it and happened to coincide with the need to empty the septic tank anyway, so we killed two birds with the one stone.

But it's still noteable that quite a lot of our clients comment that the place is clean; and when they do, they usually refer specifically to the toilets.   It always puzzles me: what do they expect?  Perhaps the joke gives a clue.

Not the rock band.   We have some nice doors finished in oak on the ground floor of the gîte.   They aren't solid oak, but what the carpenter did was fix some thin, shaped, solid oak planks onto the fronts of cheap stock doors, so creating, at relatively low cost, a solid oak effect when the doors are shut.  They look very nice, in my view.

I thought it would be a good plan to have doors with the same finish in the house, so as part of the renovation project I got in touch with the outfit that made the gîte doors, for a quote for the house.  I got on well with the guy who ran the business before, but he has sold up and I was dealing with the new owner.  I showed him the original doors, and asked for a quote to supply and fit, with frames, three internal doors in the same finish.  Guess how much.

Well there's what we call in the trade "taking the Mick" and I reckon that €4,500 for three doors is doing just that.  Four thousand five hundred euros.   That's not even close, and is so far from a reasonable price that negotiation down to something sensible wouldn't be possible without us both knowing that he was having a go.  So having told him that his price was too high and turning down the proferred negotiation, I sanded down the old doors and rejigged them to our own design.  Two tones of grey to match the tiles and stone wall, central panel in a yellow/beige to match the painted walls.  A bit severe in style perhaps, but probably better in the hallway than oak, since it gives a lighter effect. 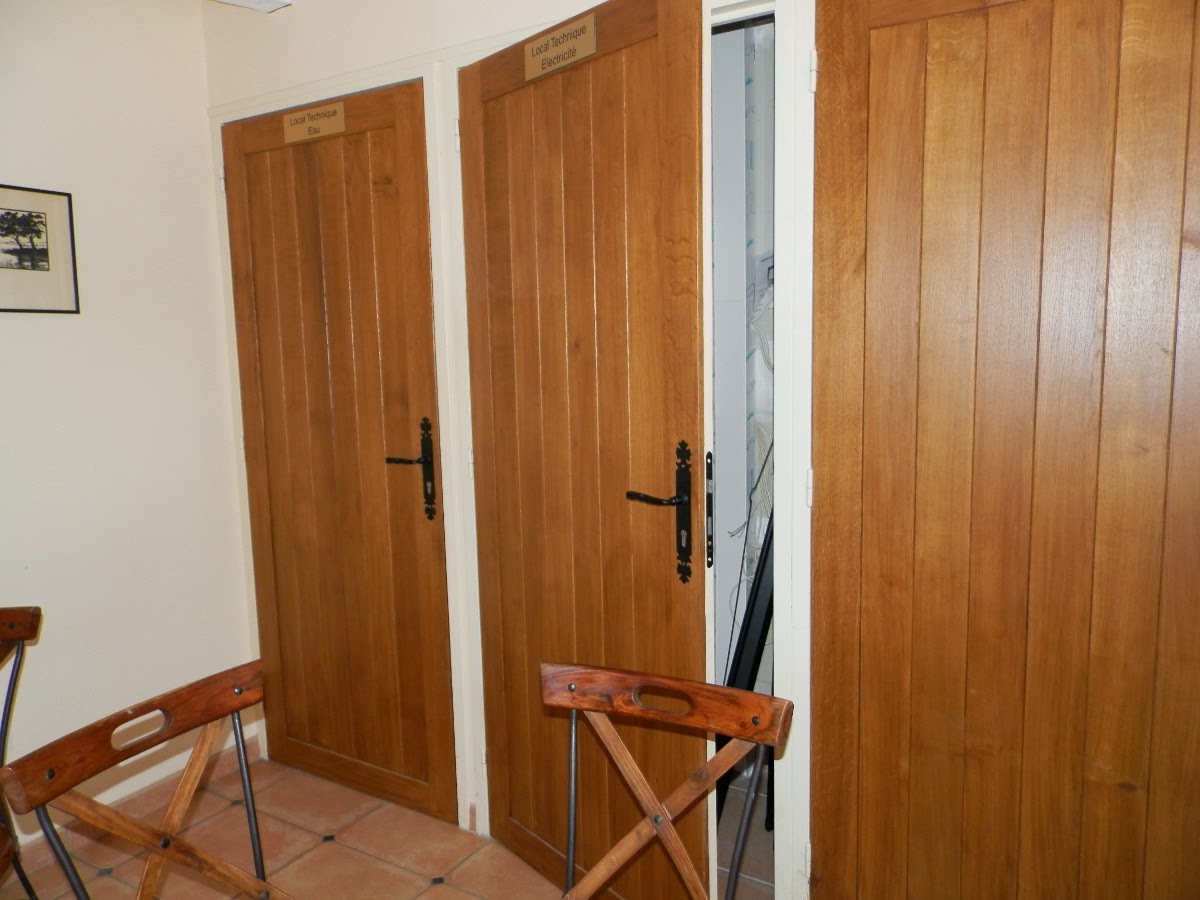 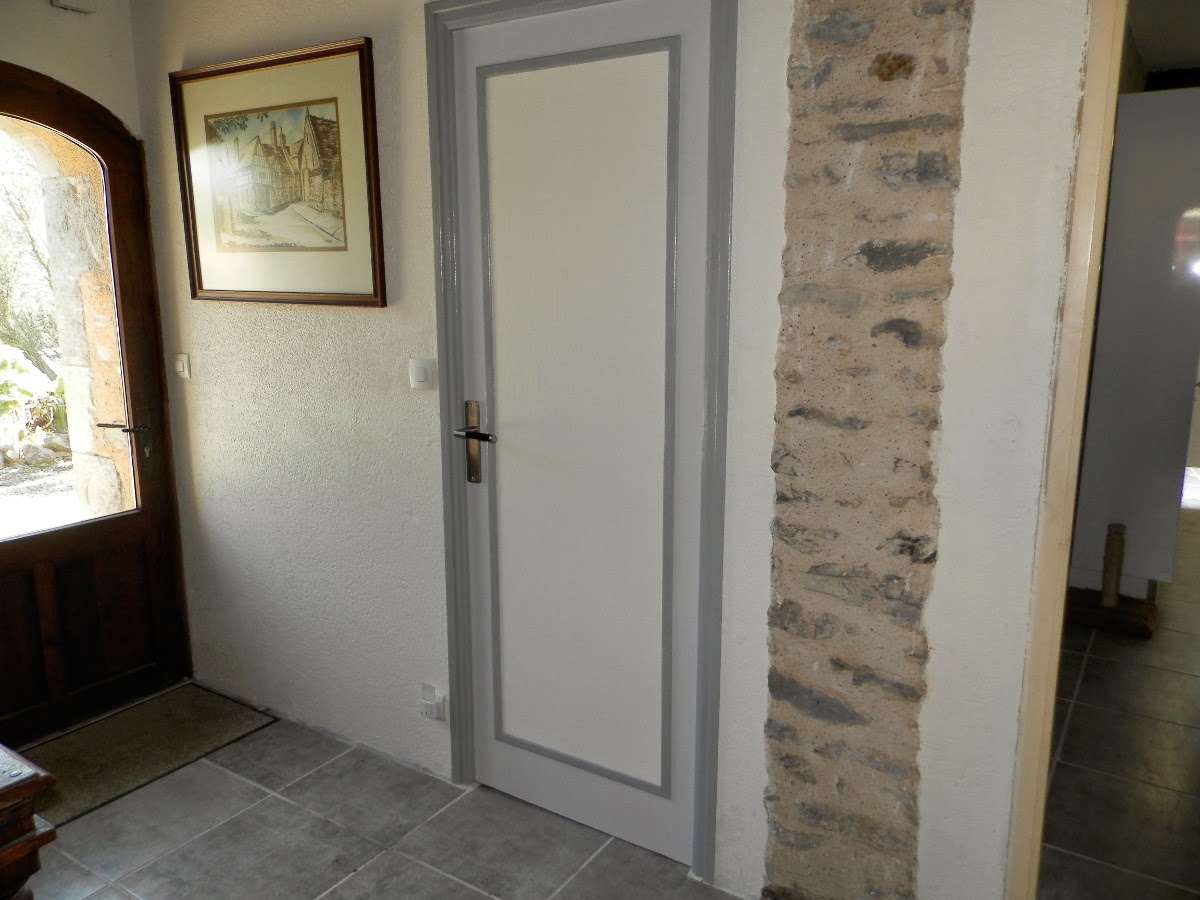 I put a series of posts up during last winter detailling a kitchen project that I was undertaking.   In fact, the kitchen revamp was only a part of what was going on: the kitchen and the office were swapping places.  So the new kitchen is where the office used to be, and the new office is in the place of the old kitchen.

The office part of the project had pretty much the same components as the kitchen:  dig up the floor, retile it, do the walls, get the electricity in, furnish it, so there was no point in detailing the whole process twice.    But as of yesterday, with the fitting of the blinds, the office is finished.  Nothing more left to do.  Hooray!  So here's a few pictures to show what it looks like.

The office is long and thin, so here's two views, one from each end.  The first is the view from the door, the second is from the far end.   My desk is at the end, Anita's is on the left partway down. 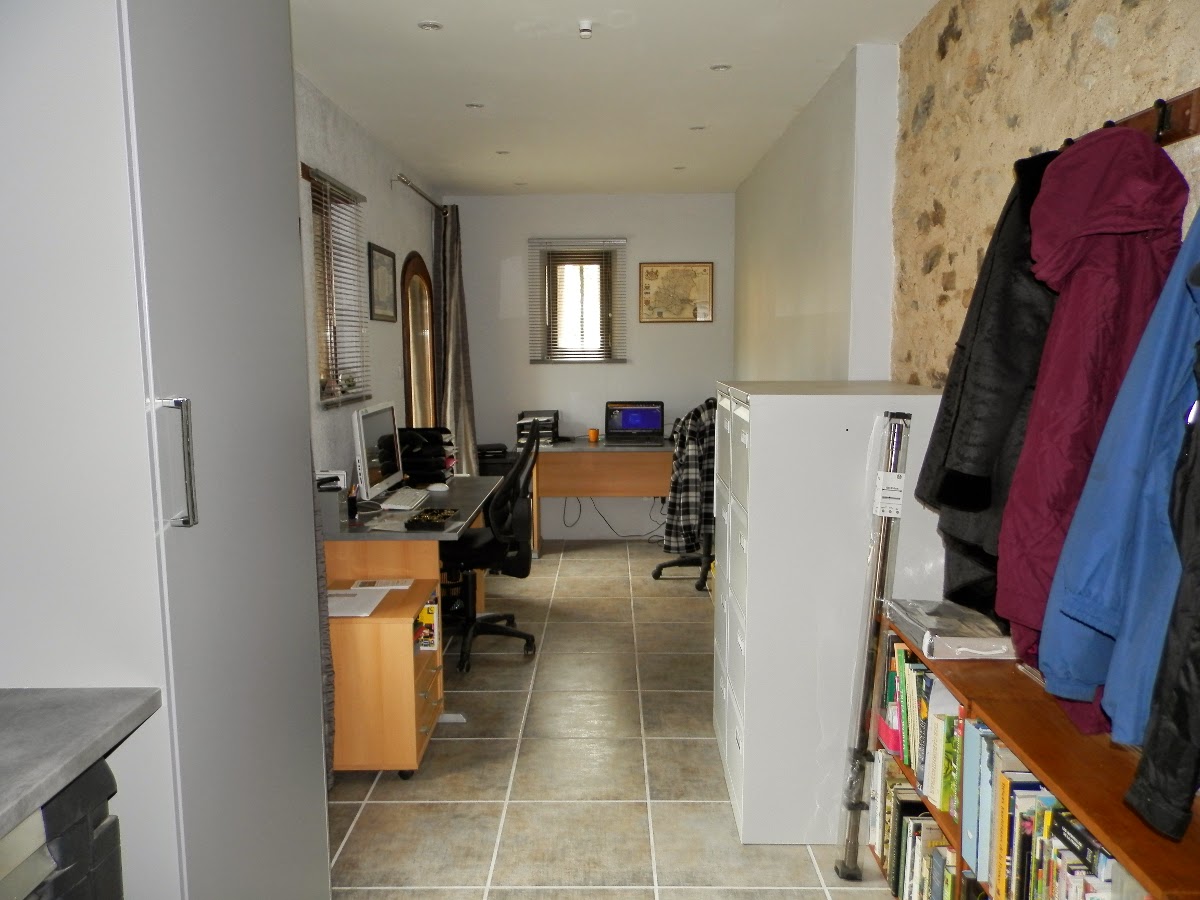 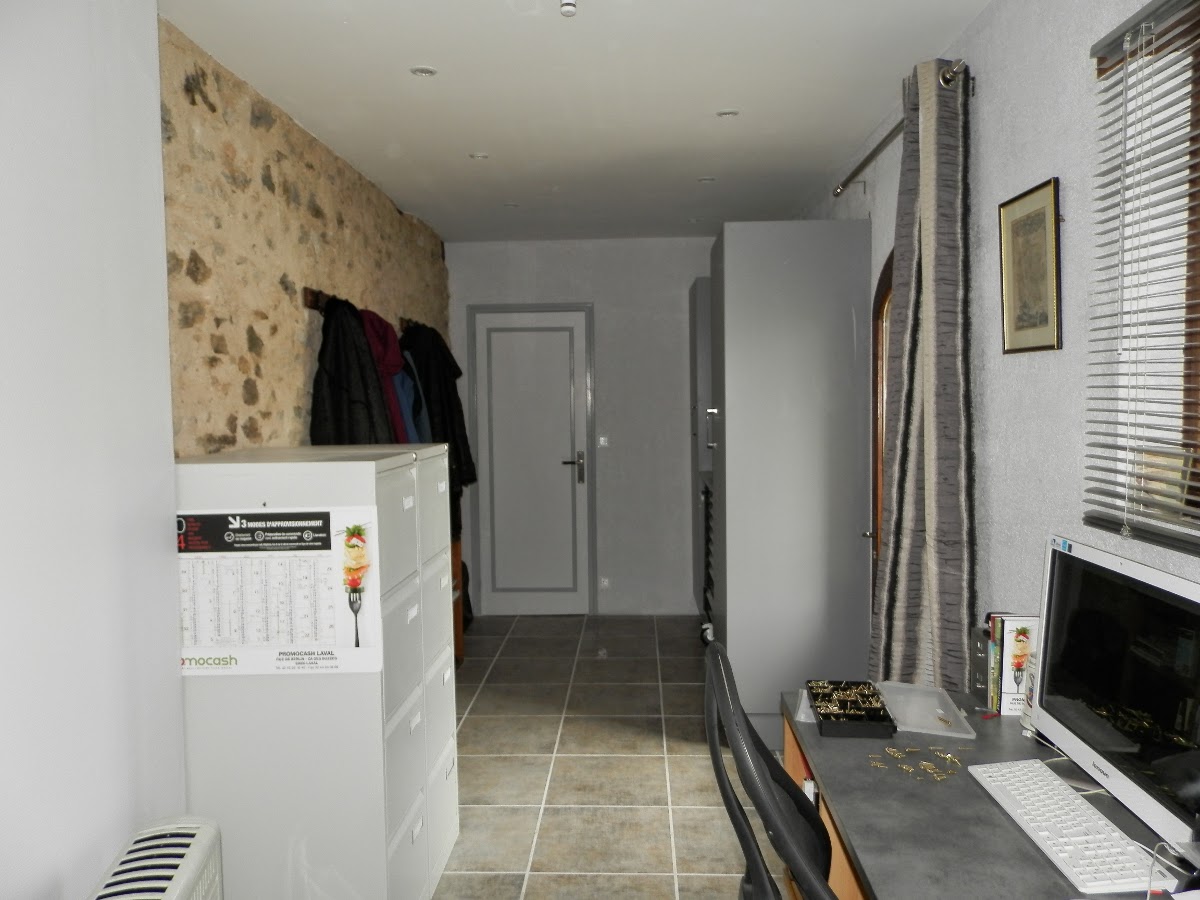 Here's a closer view of our desks.  Anita's Lenovo PC (the white one) was picked up at a second-hand shop in Laval for a bit less than 300 euros.  She had been noticing some problems with her little netbook PC for a while, and it's a bad idea to wait until they break before taking action.  So this big, 6-month-old, Win8 touch-screen PC appeared just at the right time and we snapped it up.  But boy, did we find Windows 8 hard to get used to!  I personally think that the naked user-hostility that I percieve from this o/s could well be responsible, in part, for PC sales plummeting in recent years.

We were pleased with the grey desk tops.  The desks were old and tatty, and in the light fake wood colour you can see in the picture.  We thought about replacing them, but we found some grey counter-top material in a DIY shop and I cut it to size and replaced just the tops.  It matches the decor, and the feet of the desks, being grey originally, make it look like the desks are supposed to be like this. 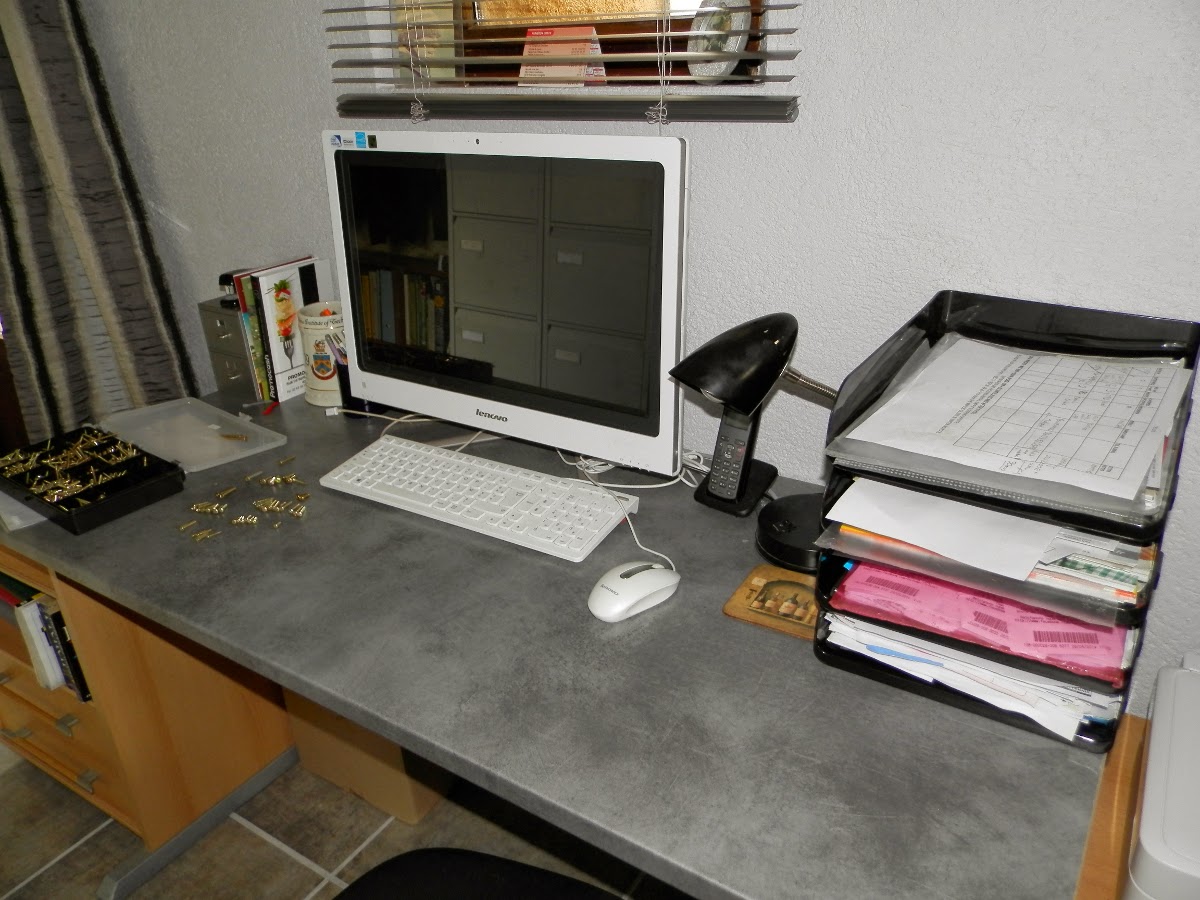 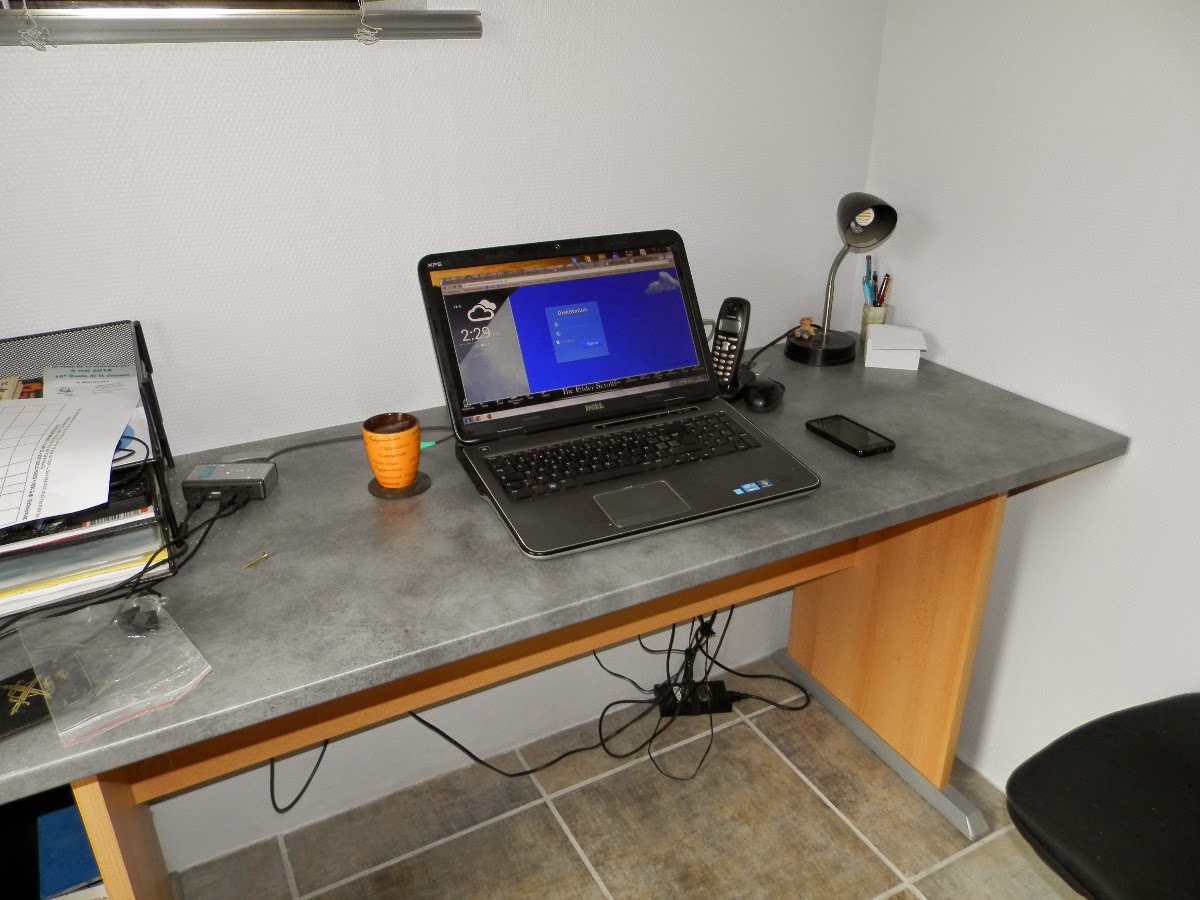 At the door end of the room, there was space for a couple of cupboards, so we got some extra kitchen units and created a storage area for my DIY tools.  These are on the left as you walk in.  Two whole tall cupboards, and a nice solid tool trolley for the smaller things.  I used to have a naff plastic set of drawers, but they were always hard to open, got stuck and were generally a pain.  So I have the double pleasure of getting rid of something that was thoroughly disagreeable to use, plus a shiny new thing that is a real treat.  The area above it serves as a small working area, and a place where I can charge tool batteries.

The coat rack is on the right, and beneath it is a set of wooden bookcases made by Anita's Dad.  Solid mahogany, built like brick outhouses and showing no signs whatsoever of the woodworker's craft, they seem to have stuck around by virtue of their indestructability. 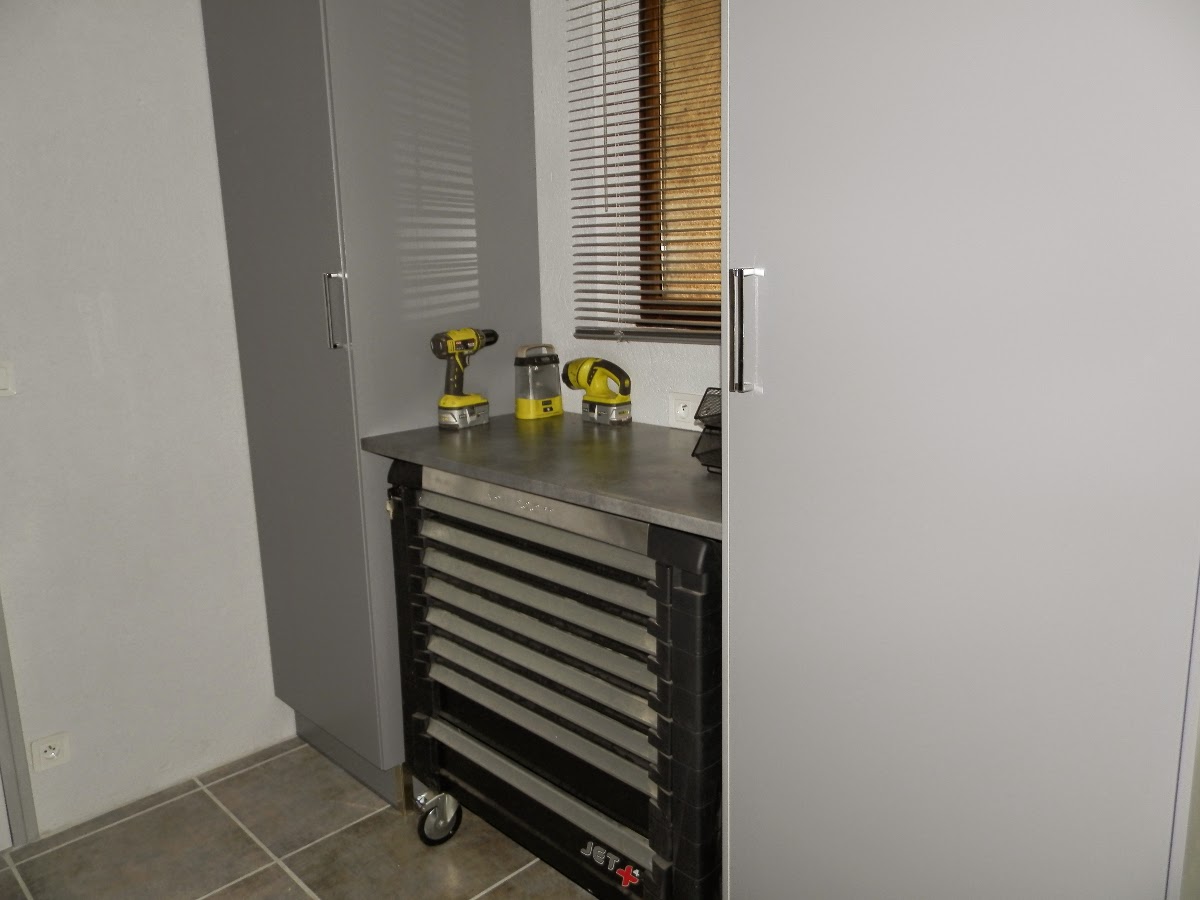 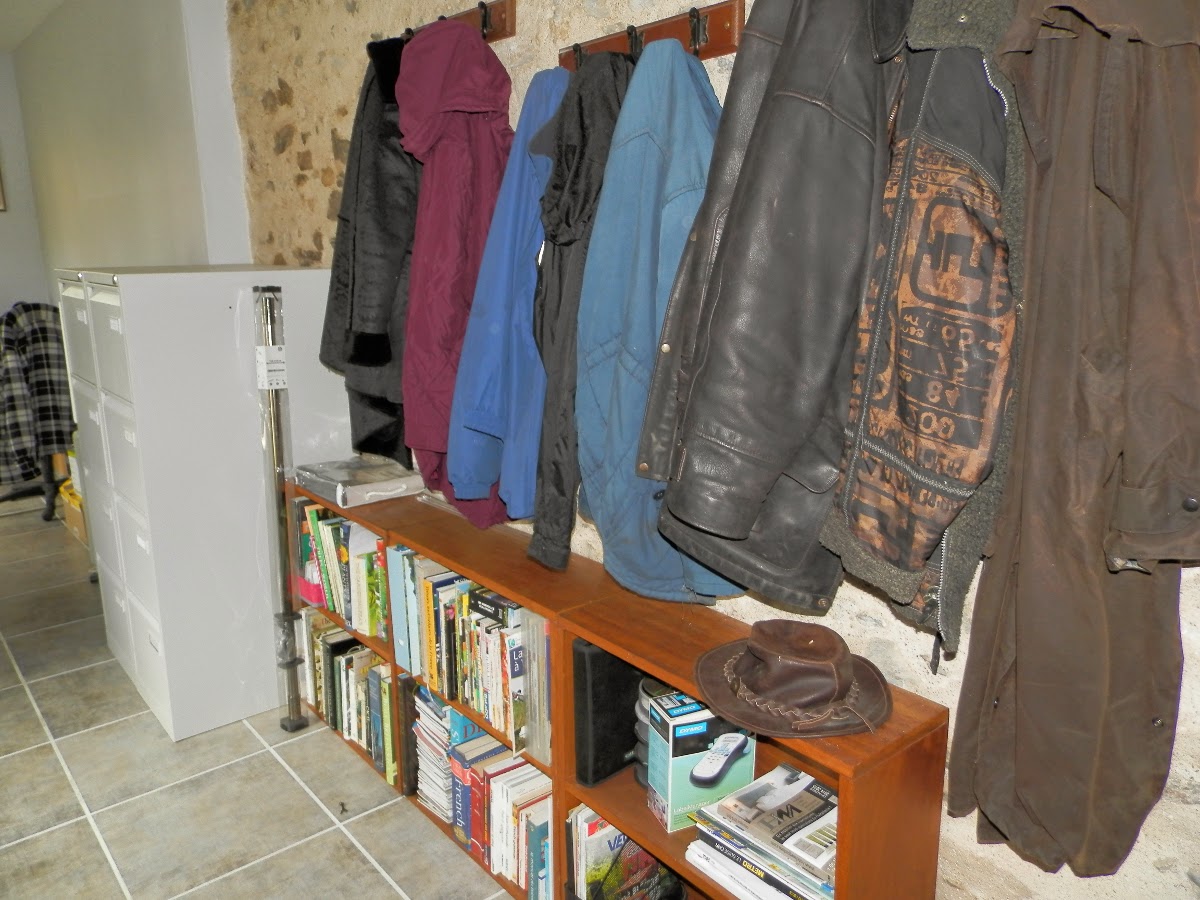 Finally, I am especially pleased to have installed Cat6 Ethernet cables, one for me and one for Anita, to connect our PCs to the internet router in the hall.  They terminate in some discreet conduit in the corner (the black mains cable will disappear) and are (touch wood) working well.  These very words have passed along one of them on their journey to that great cloud in the sky. 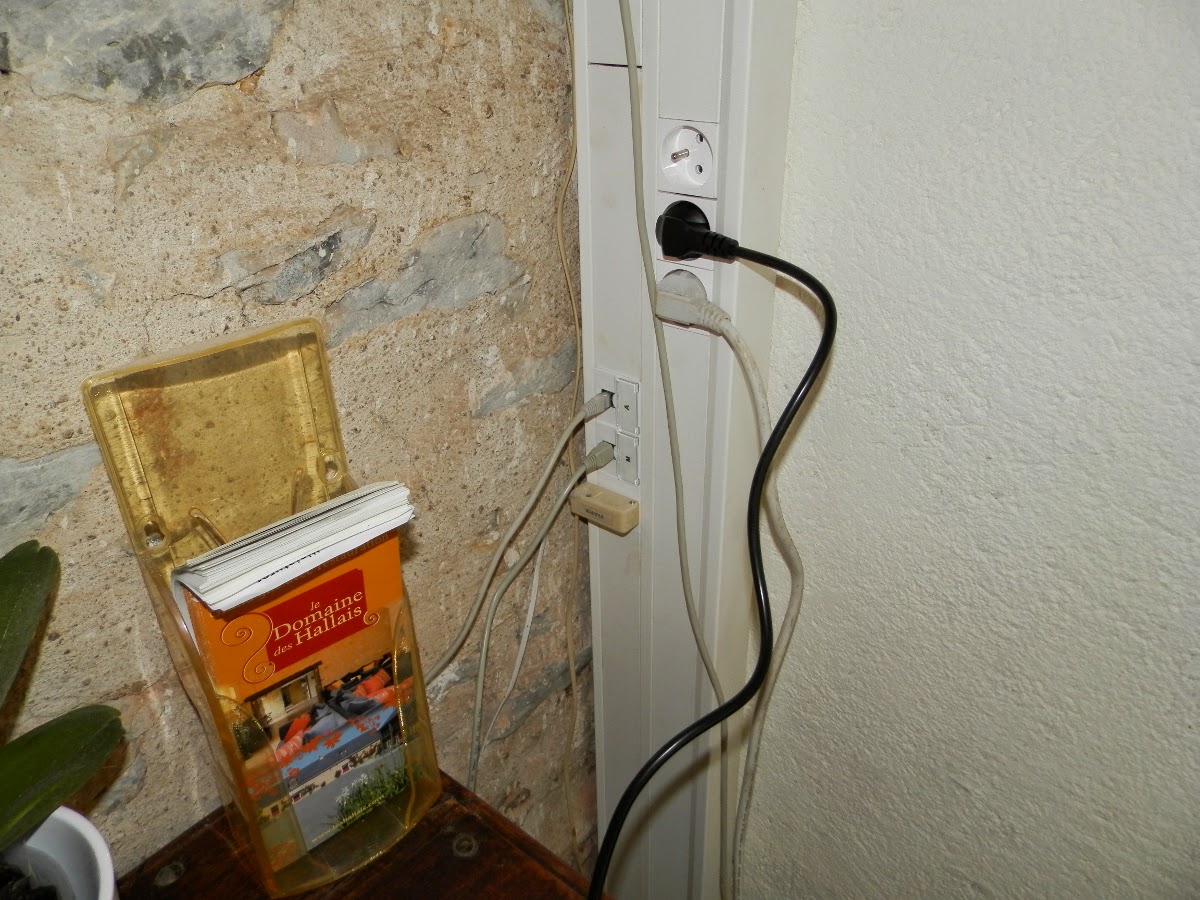 When we left uni, setting out on the great road of life, we pooled our resources, got a mortgage and bought a house.   We got the biggest mortgage that we could just about afford.   Mortgage rates, that were at around 7% promptly rose to 8% and thereafter drifted fairly quickly up to about 16%.  We were skint.

We budgeted our monthly outgoings to the penny.  After essentials like the mortgage, gas, electricity, travel to work, rates and food we had about 20 quid left per month for non-essentials like clothes or furniture.  We were lucky that during this whole time, we had no breakdowns of household appliances like the boiler, or we'd have been in deep doo-doo.

We were happy in those times to buy things that were cheap.  Second-hand was OK for things that were in good order, and we were always pleased to pick up a bargain.   So, now that things are not so financially squeezed, I see it as a duty (and a pleasure) to dispose of those things that we no longer need, in such a way as to benefit people (like my younger self, perhaps) who can make good use of them.   These things could be items in good working or decorative order, or perhaps they no longer work but someone with more skill, knowledge or time than I have, can bring them back to life.   The kitchen  and office revamp has resulted in some perfectly good or slightly used kit that no longer fits the style, to be available at bargain prices.

Ebay used to be my favourite avenue to market, but it seems to me that they're getting both too greedy and too restrictive.   And it doesn't seem to be so popular here in France as it is in the UK.  Here they prefer straightforward small ads, and the website www.leboncoin.fr seems to be the most successful.

I was pleased that our excellent solid wood dining room chairs were snapped up by a couple with a pair of young kids who were delighted that they would go into their dining room without even the need for a repaint.  The sofas from the gîte were getting a bit tatty for a place that aspires to be top rank, and have found new homes, scattered around the local area, aided by leboncoin and word-of-mouth.  Light fixtures that didn't sell online have been sent home with my sister to be offered to hubby's mum.  Coming soon onto the second-hand market are an armchair and a glass cupboard door.  Perhaps that will be a good riddance, in the nicest possible way. 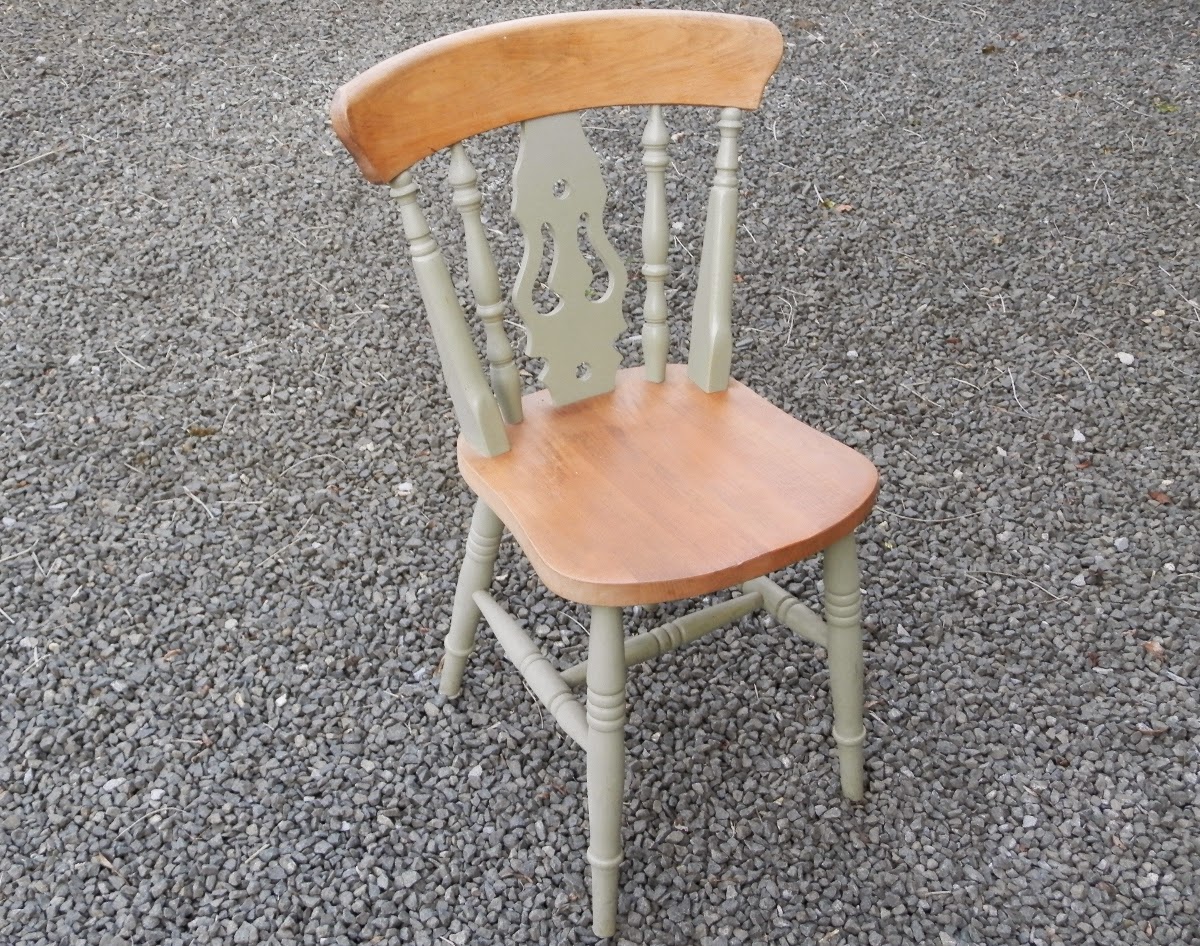 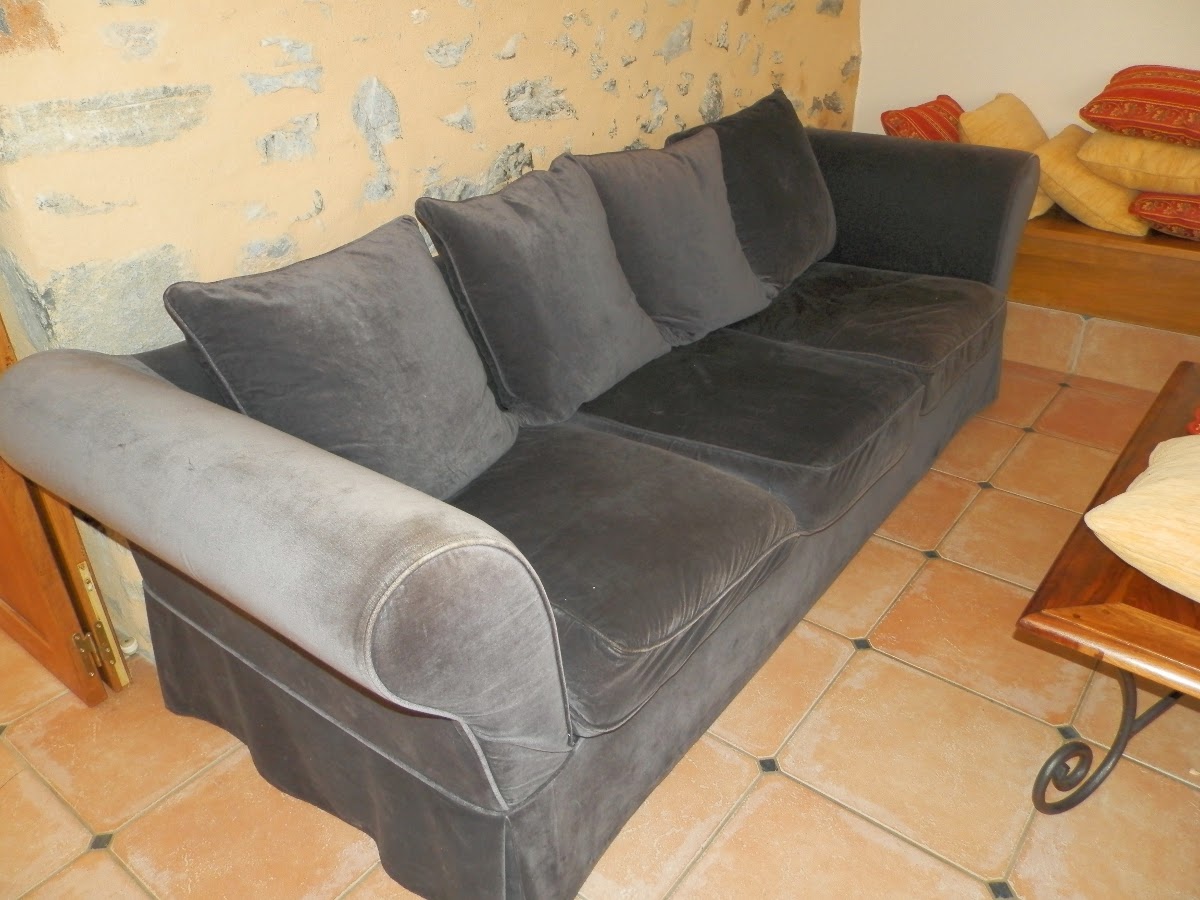 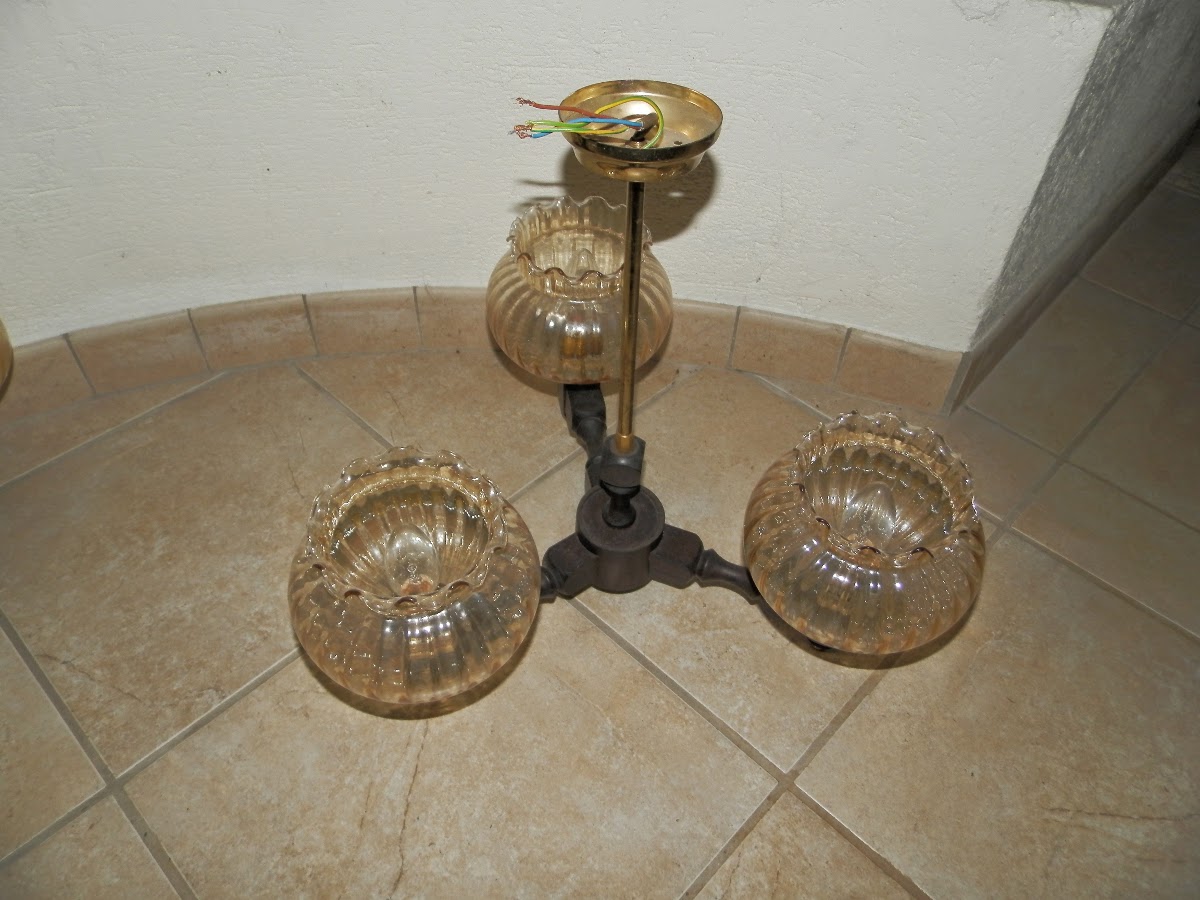 Posted by Mark In Mayenne at 00:37 No comments: