Like many boys and young teenagers I had an enthusiasm for models, and for flying; thus an enthusiasm for model aircraft.  I built and flew various aeroplanes at the time, with varying degrees of success.  A radio control system being beyond my wildest budgetary dreams, the planes were all "free flight" which meant they usually ended up in a tree, or disappearing over the horizon, never to be seen again. (If they flew at all, that is)

Later, I took my flying bug into flyng full-sized aeroplanes and gliders, followed by hang-gliders and parapentes.   Although I was convinced at age thirteen that I was going to fly for a living, the passion never really bit beyond the level of enthusiasm, and I did different things with my working life.  My interest in flying still remains, though, and now, having the means to acquire a radio control system, I have a couple of model aircraft that I fly from time to time when the weather and spare time permit.

Modern technology has advanced model aircraft a long way since I was a lad.  It is nearly impossible to buy a "bad" plane: they are well-designed, and a model will, if correctly put together, usually do "what it says on the tin".  The latest, lithium-polymer battery technology gives good power-to-weight, and combined with new, powerful ("brushless") electric motors, electric powered models are a realistic proposition.  You can also buy models that are "Almost Ready to Fly", which means that instead of starting with a few sheets of balsa wood and heat-shrink covering, the main elements are already built: You just have to put the pre-built wings, tail, fuselage together, and add the electronics and mechanisms.  This suits me fine, but one day I think I'll build one from scratch, like I used to.

I have little interest in aerobatic stunts: I dont get excited by the possibility of performing a perfect loop, Immelmann turn or the like, though I appreciate the precision of control need for it.  Nor am I especially interested in building and flying scale models of real aircraft.   Mostly I enjoy flying model gliders; I like the skill in flying close to the edge of what a plane will do, minimising lost height in a turn, looking for the invisible rising currents of air that will keep a plane flying for hours using only wind energy.

By chance, I discovered that a local model flying club has its workshop in the same building as we have our Franch lessons, so I introduced myself.  Yesterday for the first time in a couple of years, I took my little "general purpose" plane out for a spin, at their flying field near Jublains.  The wind was a bit blustery, not ideal conditions for flying, but I decided to fly it anyway.

My plane is a "Mini Leader", described as a beginner's aerobatic plane, it has forgiving handling, and can be set up for serious aerobatics or for more gentle maneuvres.  I have set it up for the latter.  My purpose in flying it yesterday was to verify the trim, and to confirm I could still get an aeroplane off the ground and back down again in one piece.  The wind made things difficult, but the first out-and-back trip was fine.  The second one, a gust took it during landing, and the impact made the wheels come off.  Nothing that a spot of glue won't fix.  But flying is one of those things that is unforgiving of errors of judgement.  Given the wind I should have kept it on the ground. 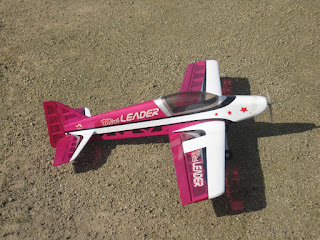 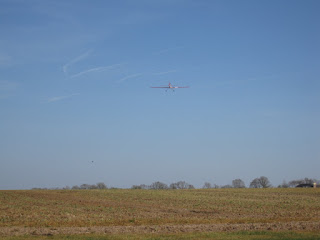 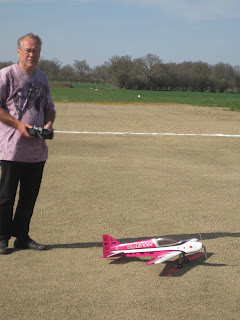 Time to plan the gardening year, review the projects, and wonder what happened to all that time you were going to have in Winter to fix the mower, clear the new flower beds, dig in compost, and so on.  Because now it's too late, of course: now is the season of sprouting things that will die or fail to flourish if you don't attend to them.

I have a few new things for this year.  One is a policy to be ruthless in only planting seeds for the number of plants I want, especially veg plants.  There's usually more seed than I need in a packet, but it seems a shame not to plant them all, and besides, they might not all germinate so I might not end up with enough.  And then you have a tray full of seedlings, and it seems callous not to pot them on, after all I encouraged them into life in the first place, did I not?  And so on, until you are faced with more squash than you can eat before they rot, or nowhere in the veg patch to put them, so you're pleading with friends to take them.....  So this year, I'm going for more variety, but smaller quantities, and hang the cost of the seeds.

Secondly, a new technique for saving money, or at least for spending less of it, which is not quite the same thing.  Not that I'm cheap, but I just don't like waste.   So this year's harvest of toilet roll inner tubes is being pressed into service as substitutes for peat pots.  The value in these things is that you plant the pot (or roll) directly into the ground without having to take the plant out of a pot, so the roots are not disturbed.  Good for certain plants that don't take kindly to disturbance, or have tap roots that go deep.

And yet another try at getting perennial poppy seeds to germinate.  I'm sure I could have bought several big, established plants with the money I have wasted on seeds so far, but this year I am trying something radical: I'm following the instructions on the packet. 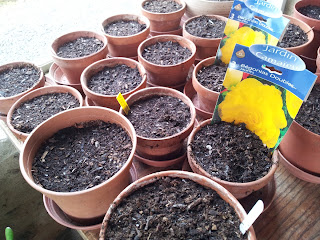 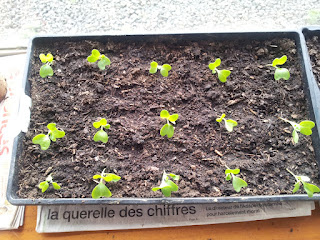 New begonias bought this year are mixing it with ones overwintered from last year. I wonder if they'll grow. I have ruthlessly cut down the number of Brussels Sprout seeds I planted, since I figure I only need about 6 plants. OK, so there's 15 here, but the slugs might get some.... and Leo can have the other tray of 15. 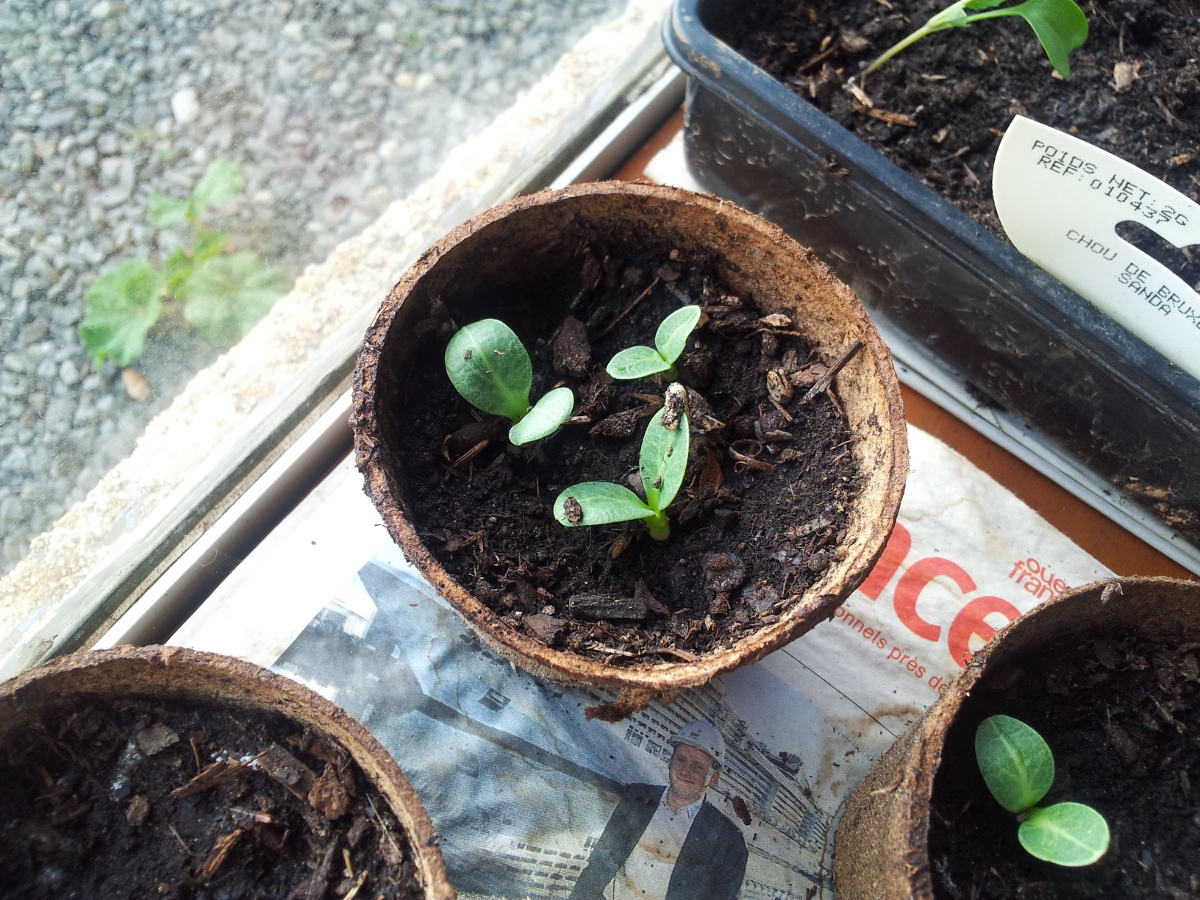 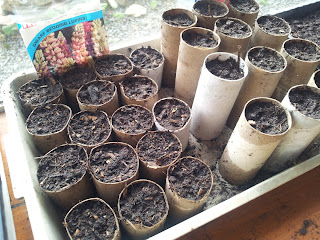 The traditional style peat pots are holding artichoke seedlings. The modern high-economy ones are holding dwarf lupins and normal tall lupins. I wonder how I'll remember which are which.
Posted by Mark In Mayenne at 08:13 2 comments:

To be honest, I don't know much about pruning roses, except that it has to be done.  If you don't, you end up with something that looks like a wild bramble bush, but with flowers.

Traditionally, you have  to use sharp secateurs, taking care exactly where you cut each branch, how near to a bud you cut, and which bud you choose depending on which way it is pointing.  On the other hand, at the RHS gardens at Wisley they have been experimenting with chain saws instead, waving them about in the general direction of the roses.  The results from the Wisley Chain Saw Massacre are no worse than those from traditional precision pruning.  I suppose the best conclusion is that, as long as you do actually prune the roses, you can't go far wrong.

The climbing roses in front of the lodge were, I think, in their third year last year, and they gave a wonderful display of powerfully-scented blossoms.   I need to control their growth to make sure they don't scratch people going in and out of the building, while encouraging them to flower near enough to the windows and doors so that the perfume can drift inside and catch the people as they pass.

To achieve this I have attached horizontal training wires to the outside of the building, and tied the long arching stems of the roses to them.   It seems that stems trained horizontally give rise to more flowers than vertical ones, so I have tried to do that wherever they are not needed to give height.  The overall effect is of a framework that, I hope, will support a vigorous flowering this year too. 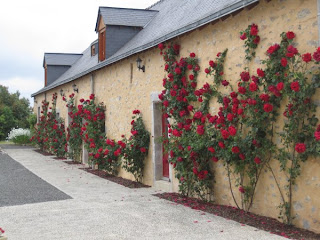 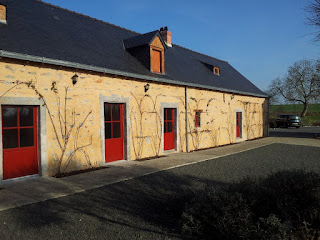 The care and feeding of old Hazelnuts

A Hazelnut isn't so much a tree as a thicket.  Left to its own devices, a young Hazelnut will throw up three or four strong central trunks, followed by smaller suckers all around.  These suckers will in turn grow on to become trunks, while the plant slowly spreads outwards by sending up more and more suckers.  The original trunks in the middle of all this will slowly die off.

There were three Hazlenut trees here when we moved in, and they make a lot of nuts.  The main beneficiaries are the local red squirrels, but I did manage to get a bowlful last year.  Those nuts that don't get nabbed tend to germinate so I have a steady supply of nut trees that I put around the garden.  I'm actually making a "nut tree trail" that I hope will tempt the squirrels to come foraging into the garden from the uncultivated scrub and woods next door.

Looking after Hazelnuts is a question of managing the growth.  If you cut off all the suckers every year, you are left with a tidy-ish tree, but it will slowly but surely die.  You need to allow a few suckers to remain as the core of a new plant, whilst cutting off the old trunks over time.  A good dollop of manure around the base once a year is a good idea too.

The tree in the picture is one of the originals, and has three main parts; the old central branch (just one left, I have cut out the others), three or four strong new branches that are growing vertically upwards, and a thicket of suckers around the base.  These suckers I'll leave in place and cut them next Autumn, by which time they should be big enough to make decent plant stakes.  The suckers I left 2 and 3 years ago are doing fine, growing into nice vertical trunks that will replace the old one, so I will leave them alone.  Then in the Winter, I'll cut another big branch off the old tree, I expect to have replaced the entire tree over the next four years or so. 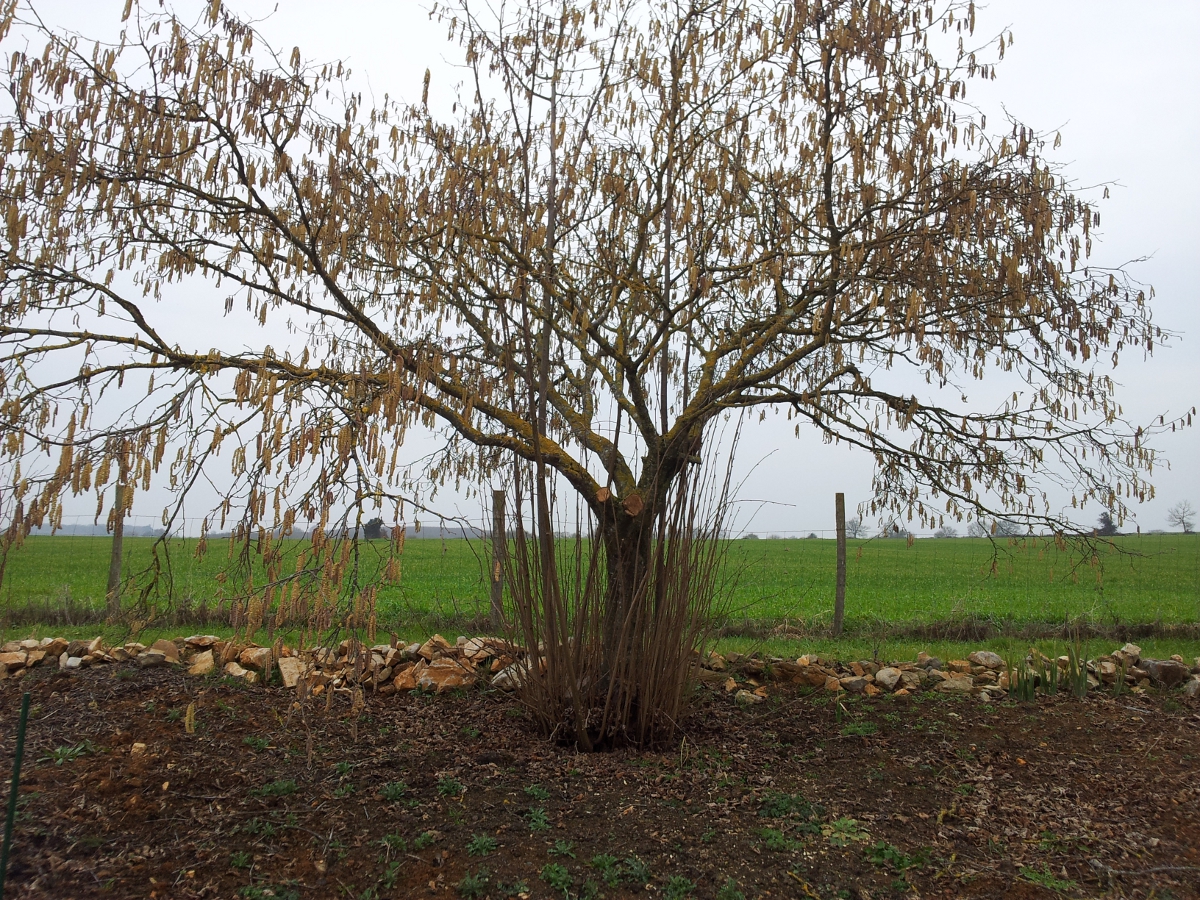