I have a dry tickly cough at the moment, arising I think from a bacterial throat infection.  So I asked Anita if she would get me a bottle of tickly cough medicine at the local pharmacy while she was out, and she came back with this bottle of Clarix.  The pharmacist told her two useful things about it: it's for tickly coughs, and you should take great care if driving after having taken some. 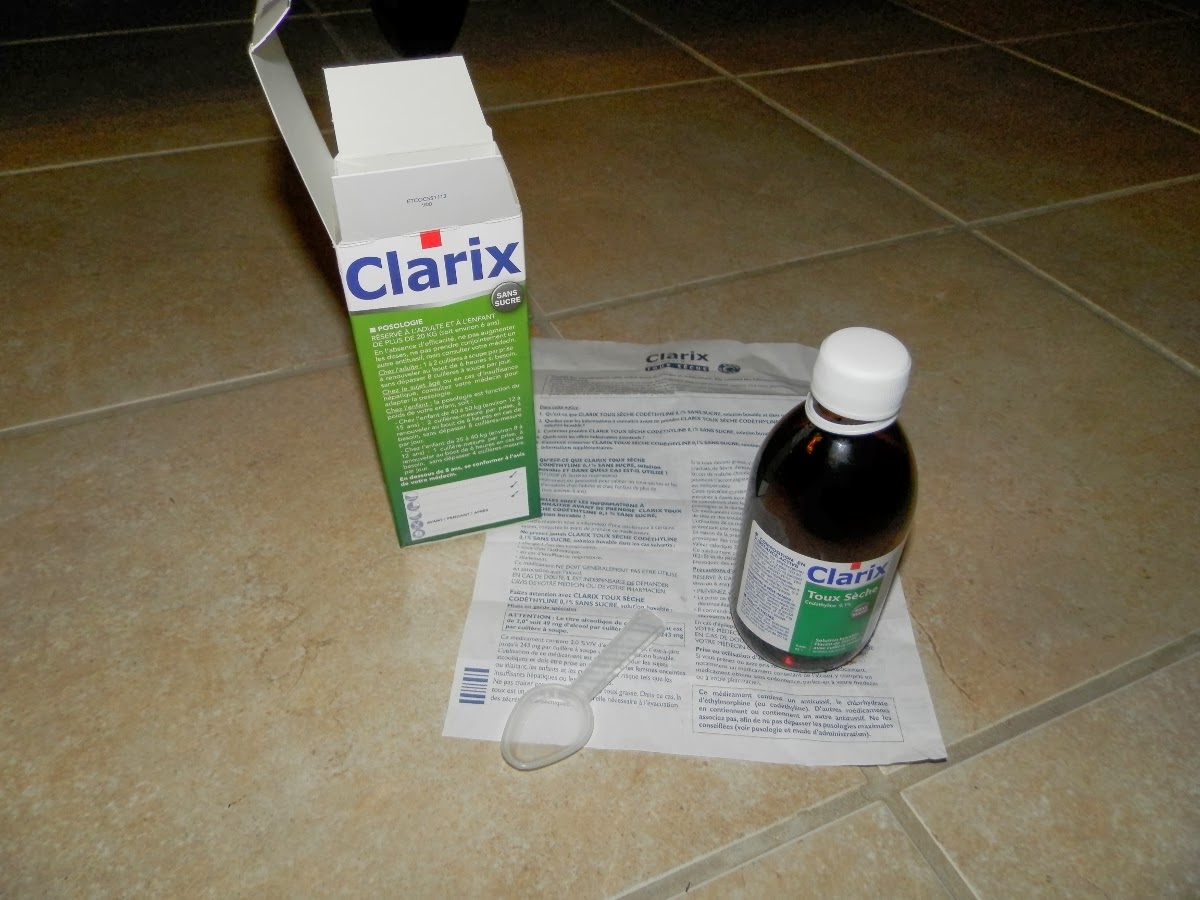 So now it's the end of the day, my driving is done, and I'm up for having my cough sorted out.  Out of the box come a bottle and a folded sheet of paper.  The box looks empty but it still rattles, so I turn it upside-down and out falls a translucent plastic spoon, previously invisible at the bottom of the box.

So I look on the bottle for instructions on how to take it, that is, how much I'm supposed to take in one go, and how often I can do it.  No instructions.   On the box, maybe?  Ah yes.  So I make a mental note not to throw the box away.

I imagine that the spoon provided can't possibly be a soup spoon, being so small that you would die of hunger trying to get enough down to stay alive.  I hold it up carefully to the light to see if it has anything on it to help me.  If I hold it just right, I can faintly see some characters embossed on it.  They're hard to read, being formed in translucent plastic on a background of  ....translucent plastic.  But I can just about make out a CE mark (very comforting to those of us who worry about such things) and what looks like an "m" in a circle. Nothing that looks like its capacity.

So if I want to be careful, I have to look up the capacity of a standard French soup spoon on the internet, (I've just done it, it's 15c.c.s) and then if I can be bothered, measure the capacity of the spoon that came in the box (probably a coffee spoon, 5c.c.s but I've not measured it) and do a small calculation.   In the end I just took a couple of swigs.

They have small villages of expensive civil servants who dictate to pharma companies what information they have to tell the punters.   And yet they can't manage to provide the most basic information about how to use the product, in a way that is clear and complete.   Who recruits these guys?

I had never come across Tête de Moine cheese in England.   I wouldn't claim to be especially knowledgeable about cheeses, and perhaps it is hugely popular and I just missed it.  But for whatever reason, France is where I discovered it.

It's a Swiss cheese, from a francophone region, which possibly explains its popularity in France.  It comes in small cylinders, and to consume it you chop one end off, fix it to a board and then scrape the cheese with a circular scraper to make little florets.   It's great for making apéros, for a light starter or as part of a cheese course, with a medium flavour and slightly chewy texture.   Very nice too. 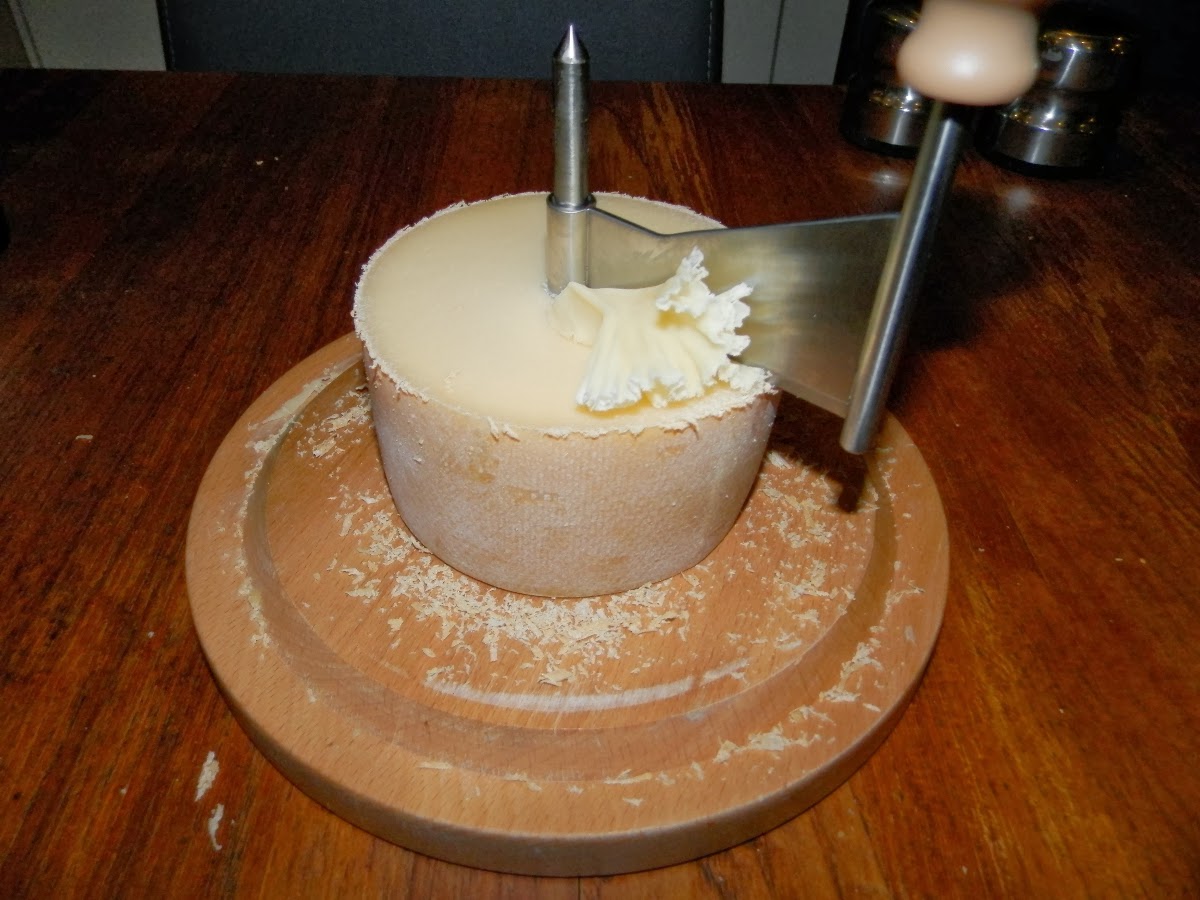 The very warm Winter that we have had so far has advanced the garden flowers way beyond their normal state.  I live in fear of a late cold snap like we had last year, that did for the daffs and the fruit trees.

However, miraculously, it is not raining this morning and the snowdrops are making a pretty display, drenched in morning dew and basking in the horizontal rays of sun.   The Mahonia is nearly out and the Hellebore is flowering profusely, and spreading like mad. 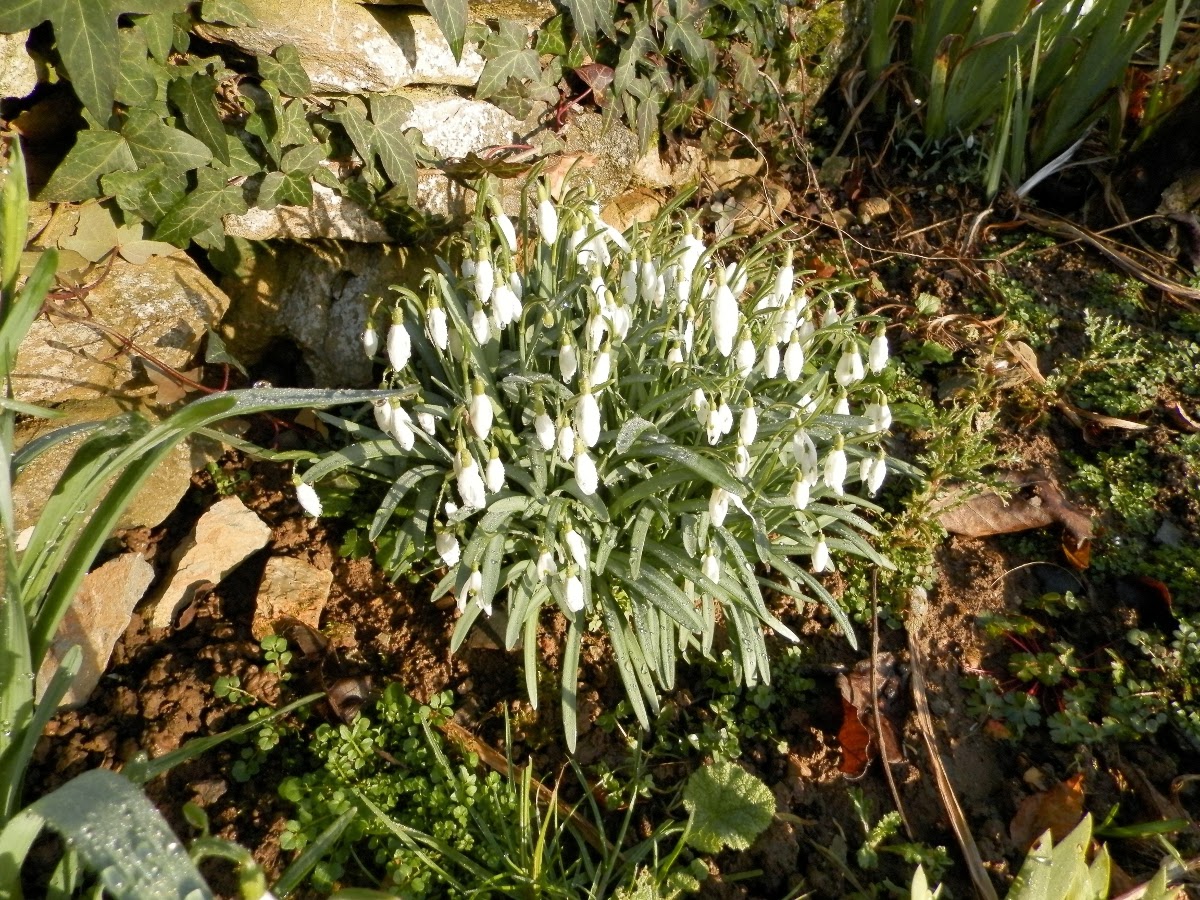 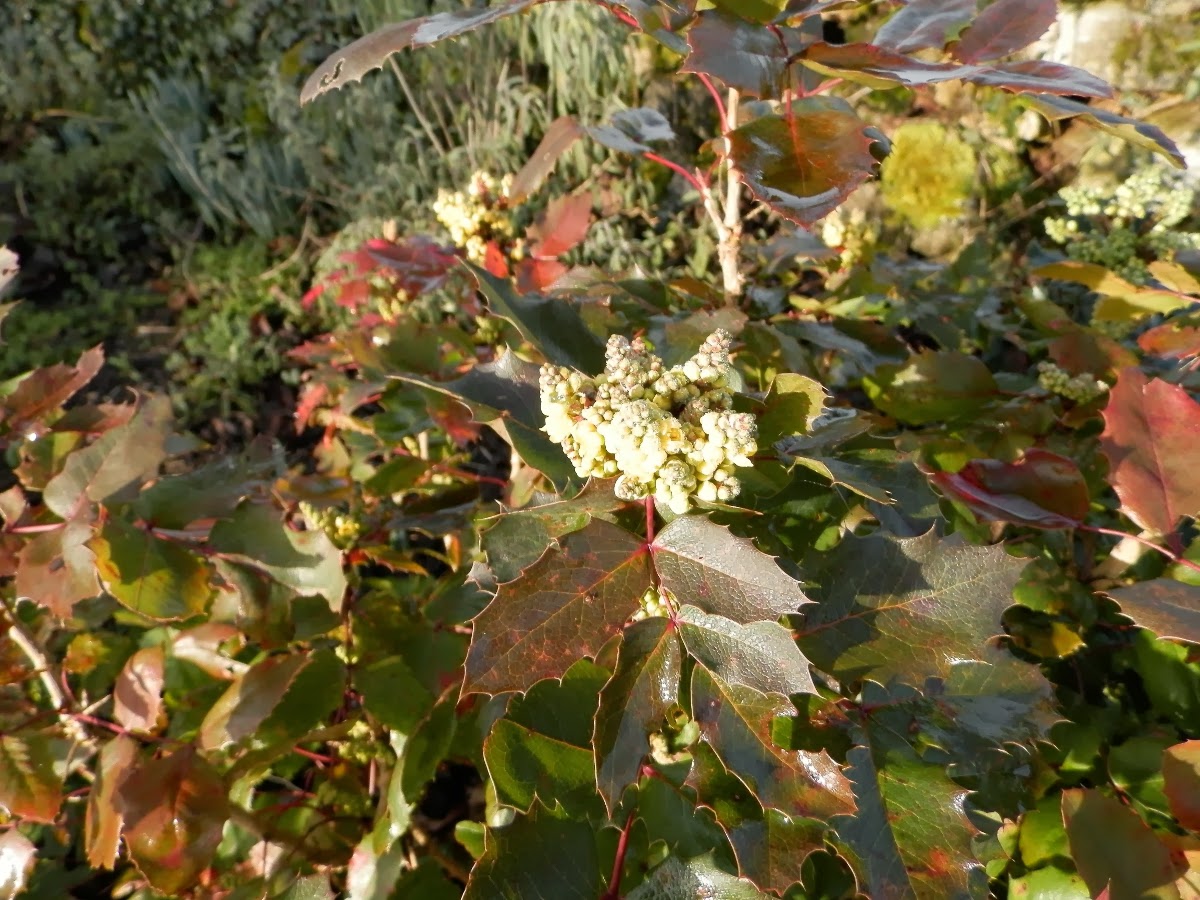 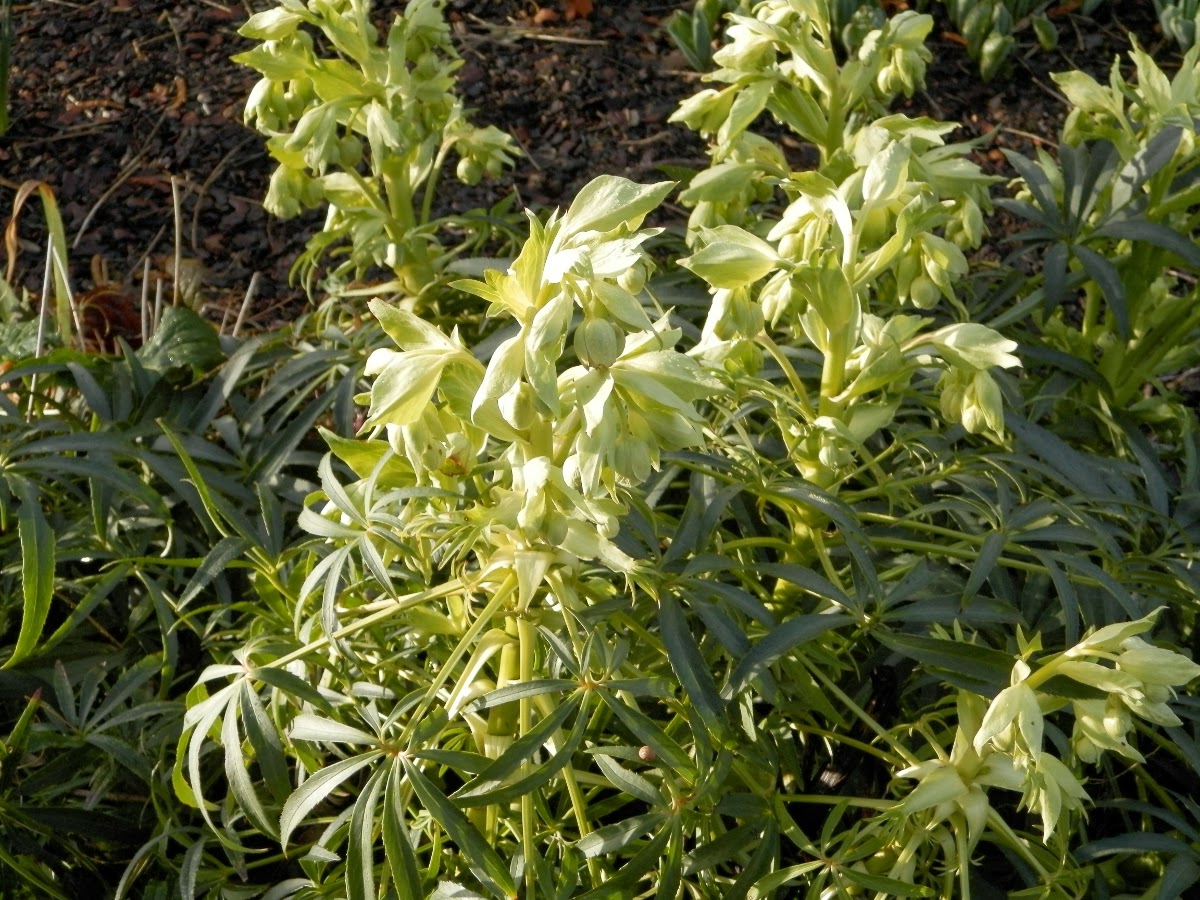 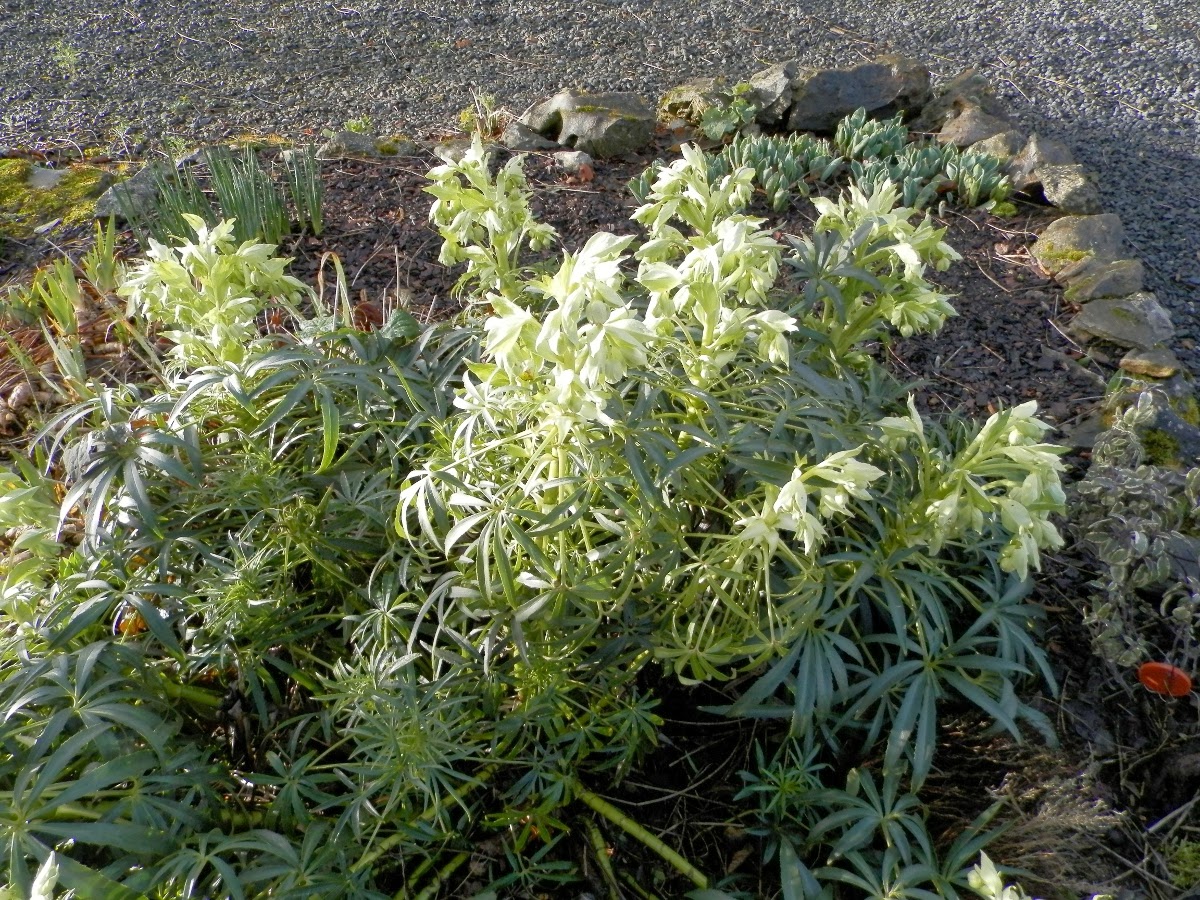 French for snowdrop is perce-neige, meaning piercer of snow - I like that.  But the French also use the word perceuse (f) for a drill, so it could be translated as snow-driller.   Both translations seem a bit violent or energetic to me;  Any ideas for a better one?

Children sometimes manage to strangle themselves on the cords used for raising and lowering blinds. I was putting up some blinds the other day when Anita announced "Oh look, they come with an anti child strangling device".   Now the meaning of what she said is critically dependent on where you put the hyphen: an anti child-strangling device is very different from an anti-child strangling device. The rules of grammar (including capitalisation and punctuation) are what allow us to interpret otherwise ambiguous sentences. They are the difference between helping your friend Jack, off his horse, and doing something that's probably illegal.

The two sentences "They ate the food that they liked" and "They ate the food, which they liked" mean different things, and a knowledge of the rules of grammar allows us to assign the right meaning to each.  But these days, one or more generations of school-leavers are ignorant of these rules, which means that readers can't be sure of what the writer intends.  I find that I have to assess writers' use of grammar, and only if I am confident in their usage can I decide what is intended.  I recently threw out a book on the history of France ( from the Cambridge Illustrated History series, by Colin Jones) because I got tired of trying to work through the ambiguities, faulty vocabulary and lack of clarity in what the author was trying to convey.

Which brings me on to the curious concept of a grammar nazi, being someone who corrects another person's faulty grammar.  Ignorance, unlike stupidity, doesn't have to be permanent, and is a matter of choice, given a reasonable level of intelligence.  If I point out to you that the sentence "Its a nice day today" makes as much sense as "Hers a nice day today" unless I mentally correct the grammar, then I'm a grammar nazi.  So if you tell me that 2+2=5 and I tell you it's not 5 but 4, I'm an arithmetic nazi?  If you tell me that William the conk came over in 1065 and I say, no, it was 1066, I'm a history nazi?  Curious.

I know I'm opening myself up to criticism of any grammatical errors that might appear in my blog posts past, present and future, but to be honest, I'd rather eat humble pie and be lifted from ignorance than stay in the dark.  Not everybody, apparently, shares this view.    Here's a picture of the blinds. 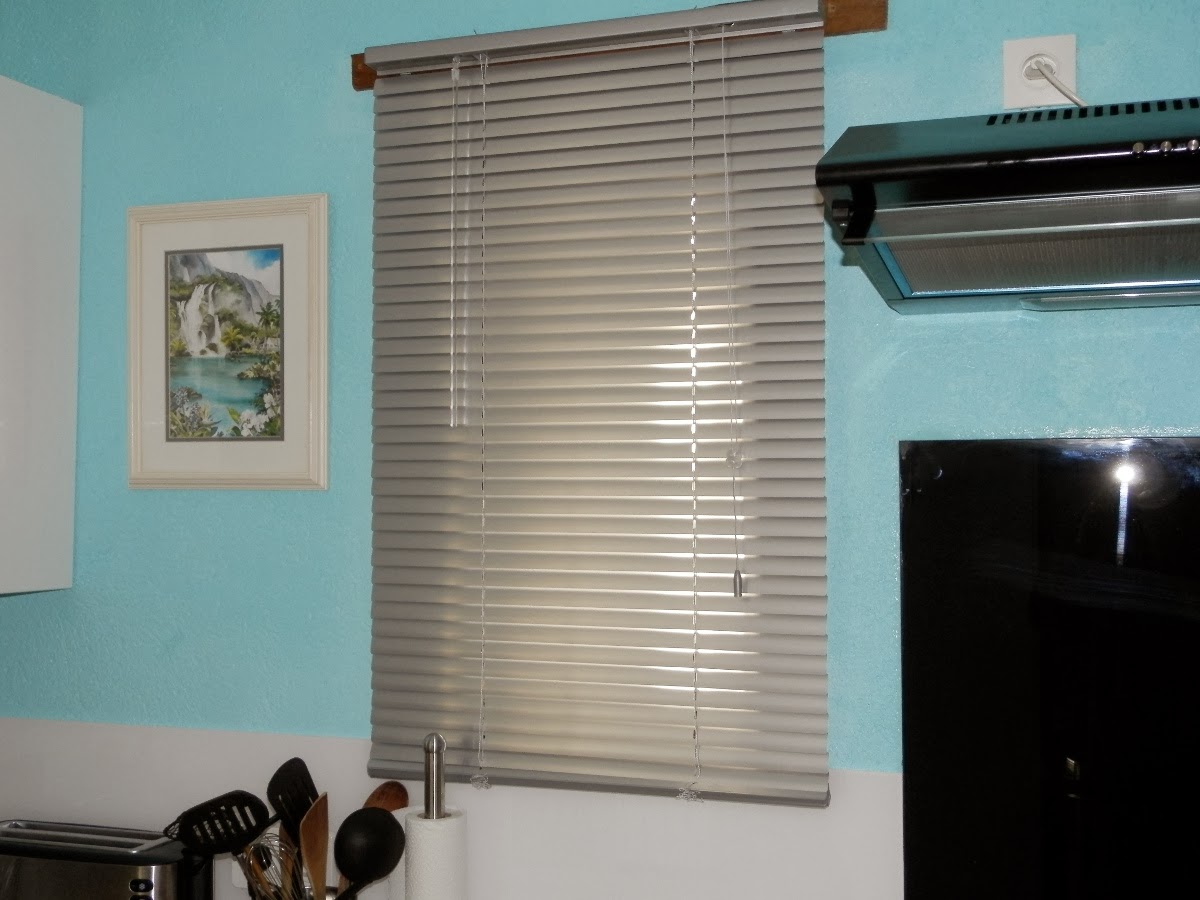 My shoes go through four phases in life:  Best, Everyday, Gardening, and then finally DIY.  Well these trainers have lived their life to the full, and are now off to that great recycling bin in the sky.  I have been wearing them during my kitchen revamp DIY project, and more recently for an office revamp project; but I discovered today that I have a pair of Gardening quality trainers that can be relegated.  Goodbye, old friends. 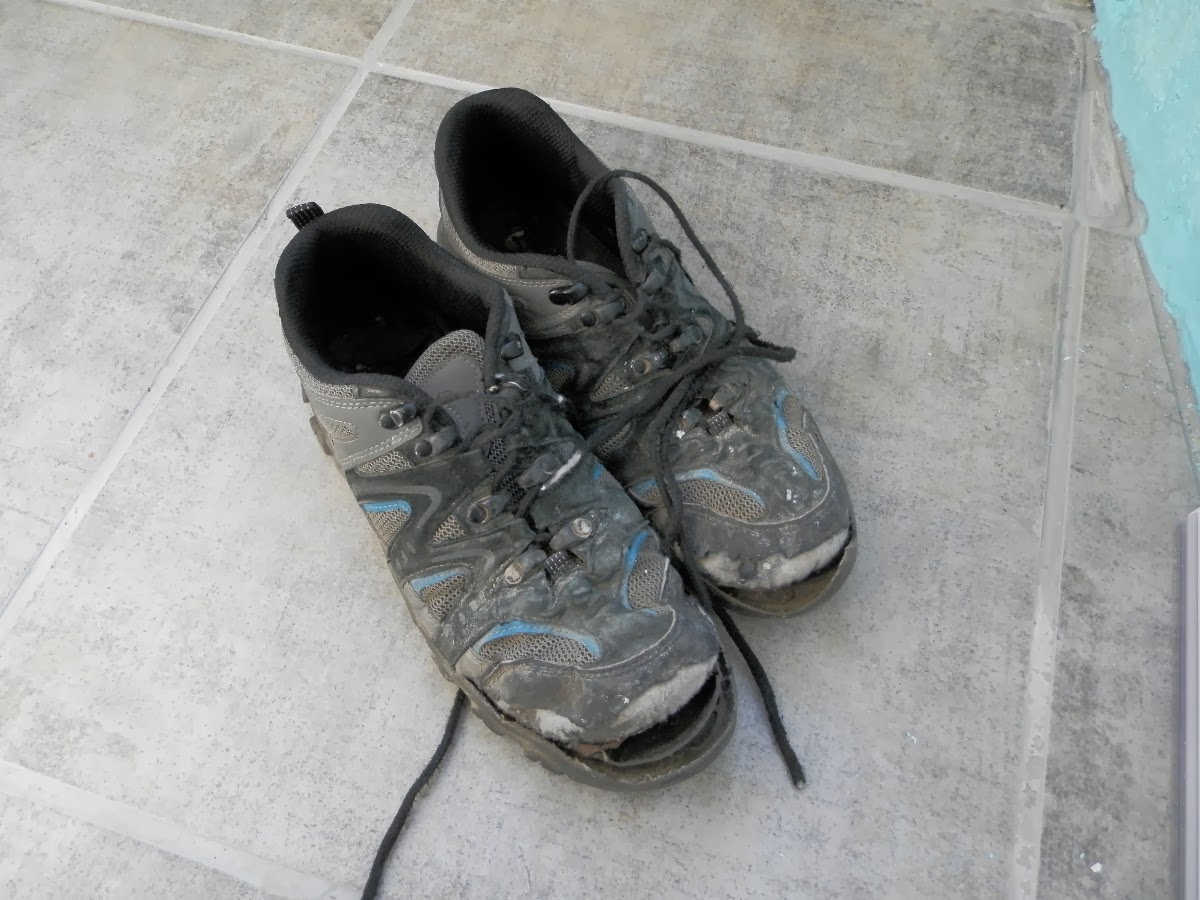 I'd like to take this opportunity to point out that this blog is not pretentious in any way, no sireee.
Posted by Mark In Mayenne at 01:45 1 comment: