We went to look at a house for sale because the advert mentioned in passing that the place has a mill.  I was intrigued, not least because there isn't much in the way of a river nearby.   It turns out that a small stream that rises in a spring some 2 kilometres away passes near the house, where it forms a lake before running off into the fields.   There is a mill wheel in a shed a short distance away, and it takes the water from the lake until, presumably, the lake is empty.

There is no longer any water passage from the lake to the mill, and the wheel is in disrepair.  The wheel takes water in at the top, turning so as to release it at the bottom, which is a more efficient use of the water's energy than the usual type of mill where the water runs underneath the wheel.  The wheel itself is about 7 metres in diameter.

Here's some pictures of the mill wheel and what's left of the mechanism. 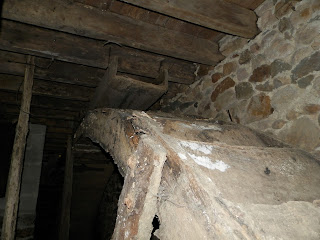 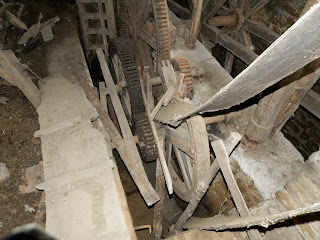 Other aspects of the property were interesting: the water comes from a well, so it doesn't cost anything, except the annual analysis that is required since the water is drunk by farm animals (not required if the water is used solely by humans), and the owner owns a lot of hedges, so the wood-fired boiler is also free to run.  He has to pay for electricity but I wonder if the mill could be used to get that for free as well.   Possibly with solar panels as an adjunct.  Hmmmm.
Posted by Mark In Mayenne at 09:23 2 comments:

The Espace Eméraud is a chain of agricultural supply shops.  They do small tractors, lawn mowers, building materials, animal food, various tools, and industrial style clothing.  Perhaps that's why these rather fine acrylic knitted tops didn't sell: not agricultural enough.  Anyway they were on sale, 70% off!  How could I resist?  And they go well with jeans that I wear to the exclusion of almost any other form of trousers.  €17 the two.  Can't be bad. 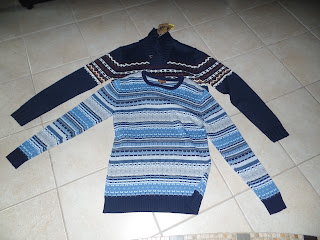 A music teacher called François Borne (1840 – 1920) went to see the opera Carmen and afterwards wrote a brilliant fantasy for flute based on its musical themes.  My flute teacher suggested that I practice it during the summer holidays, but she also suggested I make a point of seeing the opera; there are plenty of options on YouTube, or DVD.  As it happens I watched it twice; it was transmitted on France3 television with helpful subtitles, but there was also a live performance shortly afterwards at a nearby village.  I went to the dress rehearsal, being unable to make the official performance.

The performance was excellent, and a was communal effort.  The cast and support team of some 96 people were put up in local houses, and transported to and fro by volunteers.  The event was held in the grounds of a chateau and had an atmosphere all of its own. For example, the opera calls for a bell to announce the shutting of the cigarette factory where Carmen works, and the little bell that you can just about see on top of the chateau roof played this part. 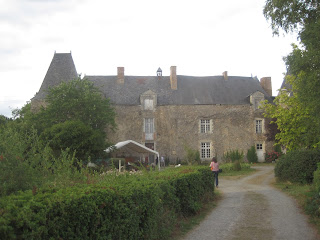 The entire event was in the open air, a risky business.  One earlier rehearsal was interrupted by rain, since the orchestra couldn't play.  You don't want violins getting wet.  But the rain stayed away from the dress rehearsal and the performance.

Apparently, the owner of the chateau wants to make it a centre for performance arts, so I am looking forward to other similar events in future. 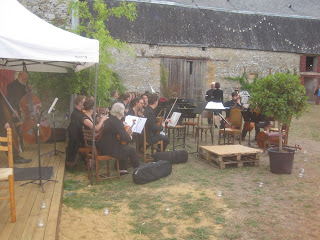 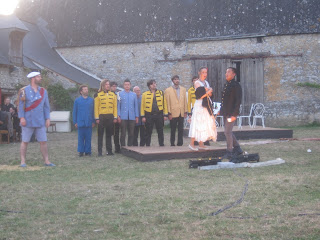 No event like this goes without a hitch.  I am told that the guy originally playing Don José had a heart attack on the way to the rehearsal (he is OK) and a last-minute sub (who in the event was a singer of international renown) had to be found.  A performer, feigning being woken up with a start, knocked over a candelabra, which called for some creative extinguishing of candles (not a beat was missed).

The conductor was good, too.  At a couple of places, where the singers were just a tiny bit out of synch with the orchestra, he signalled quite clearly, mouthing the words, and emphasising the beat, telling them exactly where they should be.

It was all excellent.

Update:  I discovered that the last-minute sub was Philippe Do.  I am told that he is a friend of the lady who played Carmen, and that she got him to cut short his holiday in Greece to come and sing on no notice whatsoever - that is, she called him in the morning and he was there the same evening for the dress rehearsal.

There were 1300 paying customers on the night - exceeding all expectations.

The harvesting of potatoes

This is the first year that I have had a serious attempt at growing potatoes.  I grew a few last year, just to see what would happen, and found it very satisfying digging up and eating the spuds at the end of the season.  I had decided not to grow ones that you can easily buy in the shops, and chose the variety called Miss Blush.    It has a blotchy pink and white skin, and tastes excellent, especially in salads.

This year I gave over much more space to potatoes, and have been digging up several of the varieties I planted in the Spring.  It's a bit early to be doing this, but the foliage had died back on these plants, and didn't look like it was going to add anything to the potatoes in the ground.  I think perhaps I didn't water them enough during the recent dry spell - other potato plants that the watering system reaches better are still growing strongly. 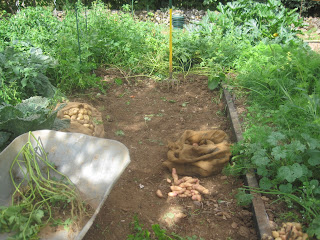 I have tried a few of this year's crop, and they taste good.  Varieties are Miss Blush, Franceline (it has pink skin), Institute de Beauvais (Pitted skin with white flesh, makes big potatoes) and Pink Fir Apple (Knobbly, with pink flesh).  The Miss Blush I saved over from last year's crop, but I don't think I will bother saving any this year, I'll just buy in new seed potatoes at the right time.  I found that the saved ones sprouted too early, so I had to plant them out, and then I fretted about the risk of frosts killing them.

I'll definitely make more of an effort to water them next year too.  The difference between the well-watered and not-so-well-watered is quite clear.
Posted by Mark In Mayenne at 03:41 3 comments:

The growth of walnuts

Walnut trees grow like weeds here; they are well-adapted to our local conditions.  The soil is a stony clay about 2 feet thick, over well-drained calciferous rock, the summers can be long, hot and dry, all of which can make life difficult for small trees.

The first thing a walnut seedling (nutling?) does is send down a deep tap root to chase the water up from deep in the ground.   Self-seeded walnuts seem to survive the hottest summers, but transplanting them, which cuts the tap root, never works.

The walnut nutling will have a single vertical branch that shoots up quite quickly. However, this represents a tasty morsel for deer, boar and hares that eat the shoot or gnaw the bark off the stem.   But if the upper part of the tree is killed, the root just sends up several more branches to replace it.  These tend to shield each other so the tree has a chance of finding a leader shoot that remains uneaten, until it hardens.

Apparently, it's not good to put walnut shreddings onto compost heaps as they prevent the decay, so they have some kind of bug protection too.

And they make walnuts.  Excellent. 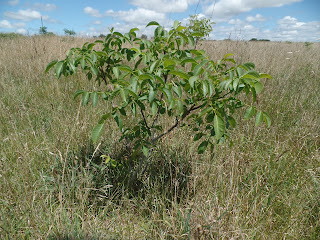 It's fetch a bucket of water, boys

There have been several new country cycle routes and walks signposted in our area, and I have been doing parts of route no. 3 on my bike.  The motivations are several: a desire to keep fit, curiosity as to where they go, and to check out the accuracy of the signage.   There is an added benefit in that the route takes me to attractive and out-of-the-way places that I would not see in the normal run of events.

Today's route was typical.  I went to the village of Chammes (the farthest point from my place) via the shortest road route, and joined cycle path 3 to get back home.  So it was, when I got to the village of St. Jean sur Erve, instead of following the main road past the front of the church as I normally would, I took the signposted path around the back.

There I saw something that just strikes one as wrong.   That is, a smouldering hole in a garage door.   So I got off the bike, knocked on the nearest door:  "Sorry to trouble you, but...."   Buckets of water were fetched, and, it being impossible to open the doors for the time being, I reached in and used my water bottle to squirt water on the inside that we couldn't get to. 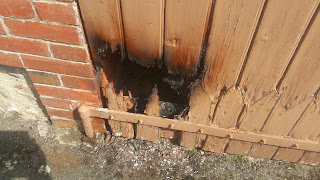 I was wondering how a fire like that starts low down in a garage door.  Someone told me that the council weed eradicators had been around that day with their weed burner.   Oops.
Posted by Mark In Mayenne at 08:41 3 comments:

Trampled on with intent

I have/had a perfectly harmless rain gauge, it used to sit in the garden collecting rain, to tell me how much I needed to water the garden, if at all.   And here it is, smashed.   There are tell-tale signs of  wild boar having dug up bits of the garden around it.   Maybe I should start hunting them. 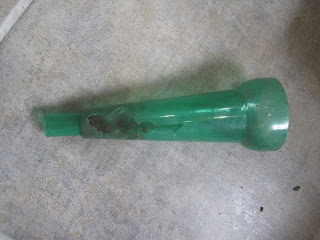 (French for wild boar: le sanglier.  Not to be confused with cendrier (ash tray))
Posted by Mark In Mayenne at 04:14 1 comment:

My Nan had a rat trap.  It worked on the same principle as the weedy little mouse traps that you can get, but it was much bigger, more powerful, and evil.  A spring-loaded bar is triggered by the rat's attempt to take the bait, and it comes down to break the rat's neck.  As a young kid, it took most of my strength to pull the bar back against the spring to set it, and if I accidentally caught my thumb in it, it hurt like hell.

After my grandad died, my Nan took in a lodger.   He was the only person who used the shed where Nan kept the rat trap.   I get the impression that he was not much liked by my family, although I had nothing against him.   So it was more out of childish malice than anything else, that I figured that if I set the trap, put it away on the shelf in the shed alongside some other innocuous items to conceal it, maybe it might get him. 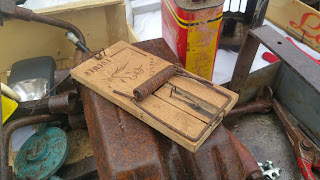 I had forgotten all about it until one day my father came to me, and explained carefully that it was a really bad idea to leave set rat traps where people might find them.   The thing is, he couldn't keep his lips from twitching up at the end, so I knew I had struck gold.

There was one for sale at the car boot today.  Happy memories.
Posted by Mark In Mayenne at 07:57 2 comments: