A cold and frosty morning 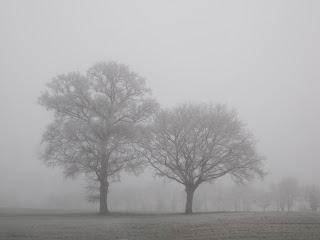 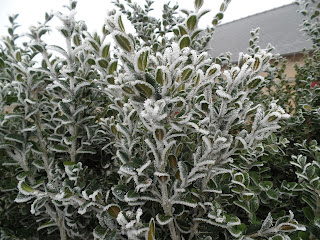 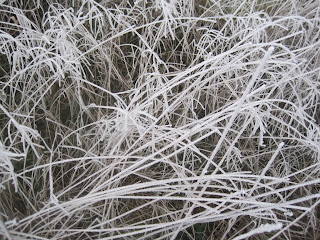 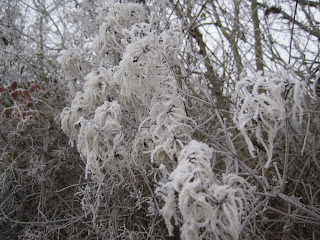 On time this year (well, almost) 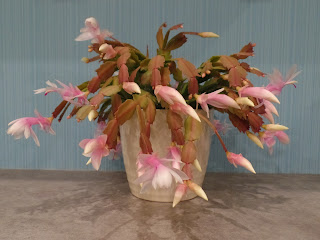 I'm in two minds about this one.

Mobile phone networks have trouble ensuring that coverage is available absolutely everywhere, and our area is not well covered.   The restaurant down the road is even worse off, because they are at the bottom of a steep-sided valley, and hardly any electromagnetic waves get down there.

Luigi, who runs the restaurant, has decided thet he would like to enhance the network coverage available to his customers, and Orange can provide a small, indoor, wall-mounted box that will give network coverage in a small area.  He got one; here is a picture of it on his wall. 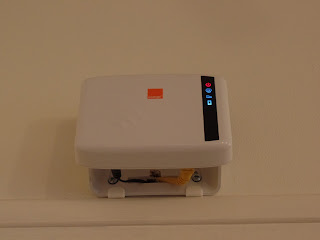 As I understand it, in summary, Orange get to improve their network coverage and gain whatever revenues and improved customer satisfaction that comes from the enhanced network;  they use Luigi's internet connection (for free) to carry the resulting network traffic, and Luigi gets to pay for the box.  Nice work if you can get it.  Anita thinks I'm just a grumpy old man. 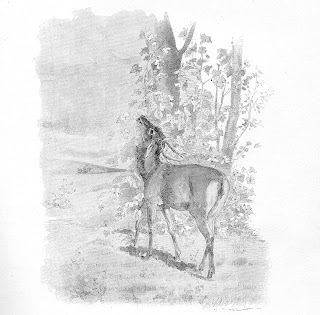 We had guests in the gîte this weekend, 29 in total, and we prepared a special birthday dinner on Saturday night, and a brunch on Sunday morning.  They were very happy.

One of the things you don't need to discover on a cold night, when in the middle of cooking and serving an evening meal for 29 guests, is that the heating system has stopped.   Strategy for dealing with it: switch the hot water to electric immersion heater so that people will at least be able to shave and shower in the morning; carry on serving the meal as if all is well; see if the heating can be fixed once the meal is done and dusted.

So at midnight, I'm diagnosing the boiler, taking the wood feeding mechanism apart, and fishing out the pictured wodge of wood that is far outside of the specs the supplier is supposed to stick to, (AA battery for size comparison,) and that has jammed the system,   Then restarting the boiler, making sure all is well before retiring at 1.00AM.  The guests never noticed a thing. 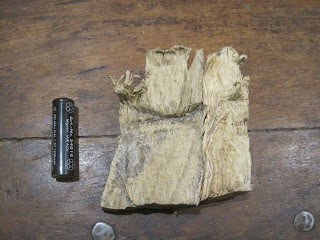 I have been present at two subsidised meals in the run-up to Christmas.

The first was a Christmas tradition common in many French villages; a lunch for the oldies of the commune.  Being over 60, we both qualify this year, and we were not in England as we have been in previous years, so we went along.

The food was prepared by local volunteers, and the table decorations created by the children in the local school.  It was explained to me how this gives the kids a sense of community and involvement in the village, as well as a feeling of obligation to look after the "seniors". 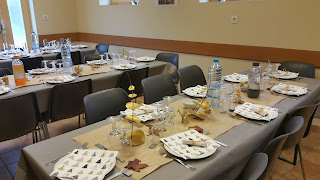 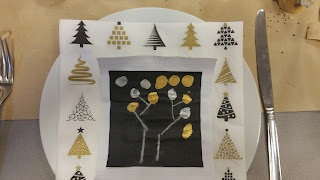 The colour theme of the table decorations was silver and gold, furnishings of silver- and gold-coloured ornaments were provided by the school kids, with carefully-handwritten menus rolled up and tied with raffia, decorated on the reverse side with stylised trees in the same colours.  The table runner in brown wrapping paper provided a gold background.  Place holders with our names on were made from carefully-selected autumn leaves.

The meal itself was superb, beginning with a natter and fizz around apéros provided by the mayor, and then a starter that was a complete novelty to me; scallops served with a slice of Parmesan on a mound of egg custard.  Extraordinaryand delicious.  Main course was quail, seasoned on the skin and stuffed with dried fruits, follwed by a ripe Camembert with salad, and then a home-made fruit and nut cake topped with an apricot jelly.   Our ex-mayor, who was sat opposite me, explained that he had done his best when in office, to ensure that if the meal was going to be done, it would be done well.  His legacy continues.

I noticed a guy sitting a little way down from me, in his late 80s I would guess.  After each course his plate was clean, and I mean it looked like it had just been washed.  Even with the quail that inevitably results in some detritus on the plate, the bones looked like they had been sand-blasted.  I got the impression that he has known hunger.

The second meal was a dinner, organised to mark the end of season for the wind band, the Harmonie of Ste Suzanne.  Again, subsidised for the musicians, it's an opportunity to thank the players (and their families for the time they spend away), and to recognise contributions from individual members.  There were several long service awards, but the standing ovation was reserved for Claude, for 70 years of playing in the Harmonie.  He must have started young. 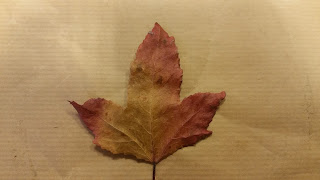 I have the impression that rural France at least, is better prepared than most for the return of small community living in a post-oil age.

For a meeting with a friend of Anita's we chose The Crab Shack for lunch.  A small restaurant on the sea front at Worthing, it served us all excellent seafood.    We took a very short stroll around the town before eating.  This busking trumpeter played very well, to a cheesy pre-recorded accompaniment.  There's a lot of recorded accompaniments on the market these days, and for various instruments; some of them are cheesy, but it's the quality of the live performance that counts, and although the tunes he was playing weren't technically difficult, the sound was superb. 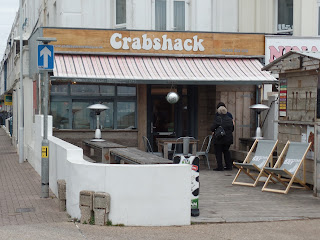 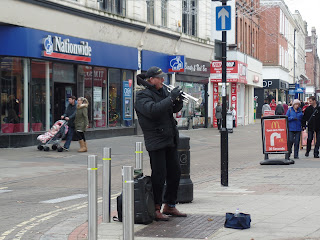 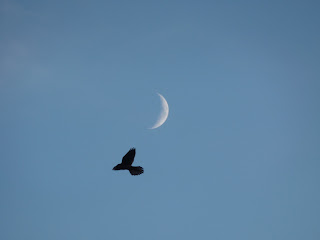 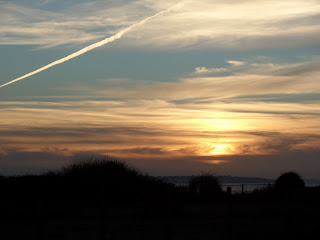 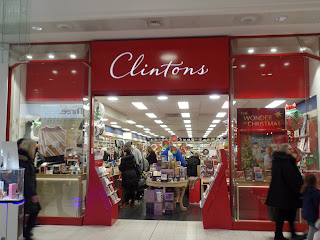 A leisurely walk on a bright crisp day

The façade of the new museum looks shiny and new (because it is).  Some of the mill barrages on the Erve are open at this time of year "to clear the river of mud", but not, apparently, this one. 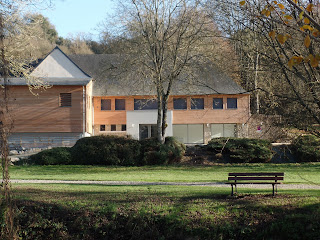 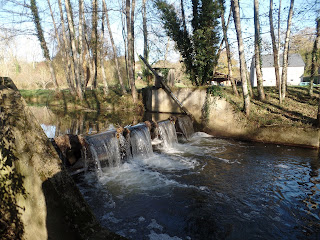 Frost on the leaves, and a deep blue sky reflection in the river. 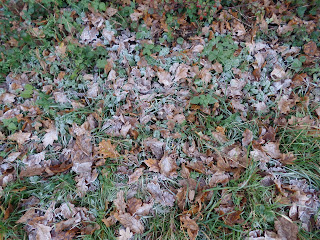 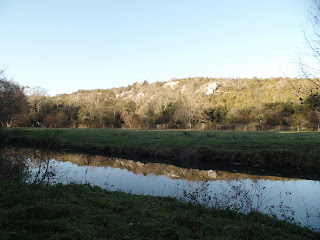 Another view of the museum, and a feline lord of all he surveys. 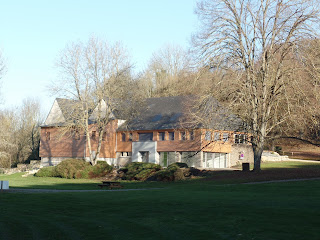 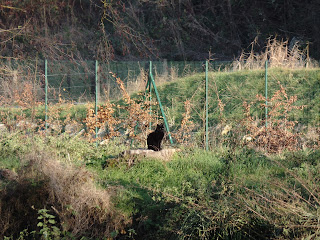