The garden at Château de Villaines

We went garden visiting yesterday, since it was a mild and sunny afternoon and it might be raining the morrow.  The chateau itself is classed as a "Monument historique", and its garden as a "Jardin remarquable".  The most "remarquable" thing of all, I find, is the number of classifications they seem to find necessary in France.  The idea that people visit a place, form a view as to whether or not it offers value for money,  and that the market then looks after itself is a bit, well, anglo-saxon.

Anyway, the veg garden is indeed, quite remarkable.  It's set out like a formal French flower garden, but with vegetables.  Rectangles of veg plots are surrounded by little box hedges, linked with grassy walkways, and decorated with pots and statuary.  Each has its own assortment of chosen plants. The garden covers a hectare, and is completely surrounded by a wall of some 3-4 metres high.  My own veg plot would easily fit into one of the two rectangles they have dedicated to artichokes, so I'm quite envious.

Here's a couple of general views of it to give you an idea. 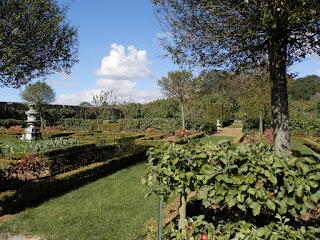 On the three walls that don't face North, they have put espaliered pears and other fruit trees.  Apples are espaliered too, but are cut low, and used to make the enclosures for rectangles of other fruit such as raspberries and gooseberries.  I scrumped one.  There is something especially delicious about a fresh, ripe apple that falls into your hand when you gently push it sideways, and it's always a pleasure to pay homage to a language that has a special word that means precisely, to steal, specifically apples, and specifically from a tree.

They also had neat tomato climbing frames that I was quite taken with.  They appear to be made of a cast-iron pinnacle welded to iron rod, and are rock solid. They sit about a metre high.  I might ask my pal Alain how to do arc-welding and make some up myself.  I've no doubt that they'd be hideously expensive to buy; it would take the rest of my life to grow enough tomatoes to recover the cost. 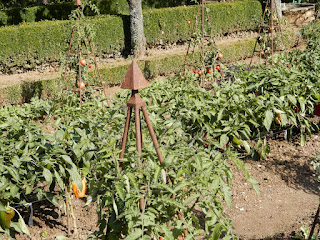 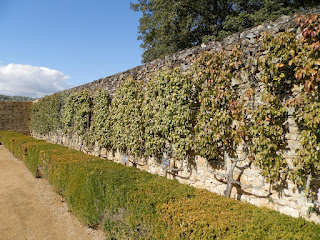 Finally, I'm noticing large numbers of butterflies about, these last few days.  I don't know if the strange Spring weather is responsible for a lot of late development, but there seem to be hundreds.  I had not known before, just how attractive Asters are to butterflies, but they seem to be at least as attractive as the Buddleia when it is full bloom, and more so than the Sedum that is now in flower.  Here's a couple from the Château, one on Asters, the other on Salvia. 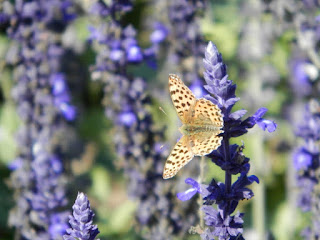 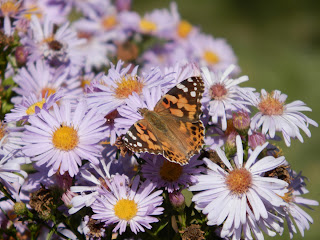 I grew the onion Walla-Walla for the first time this year.  Reputed to be an exceptionally sweet and mild type, it has lived up to its reputation.  You can easily look up more info on the web if you like.

It's good for eating raw in salads, and is perfect for frying to eat with burgers, and good for bhajis and pakoras too.  Not so good where it's competing with strong flavours, such as in a chilli or curry, where you need more traditional strong ones.  It's quite a moist onion, so probably not good for use as a thickener in curries either.

I left one in the ground to see if it will survive the Winter and make seeds for next year.  I'm not hoping for much since I read that they don't keep very well.

And my asters were swarming with butterflies the other day, in what seems to be the last of the Summer heat. 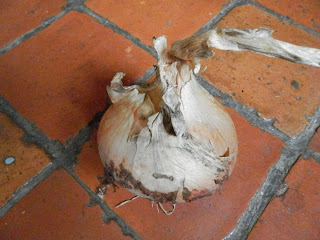 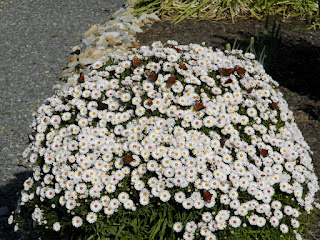 My long-term reader will know how I'm slowly building up a portfolio of wildlife photos for my new career working for the BBC.   Here's a cheeky little red squirrel who visited my garden this morning. 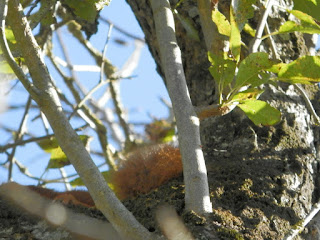 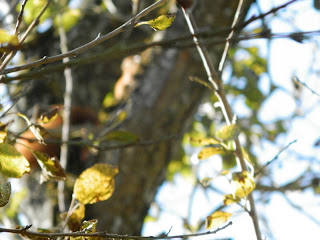 This one looks to me like a White Admiral, though I could be wrong.  Apparently a White Admiral has a span of some 6cm but this was much smaller, around 3cm I would guess.  Caught it supping on some Asters this morning.  There were three there, all told. 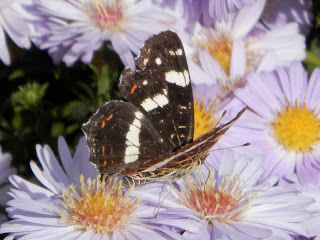 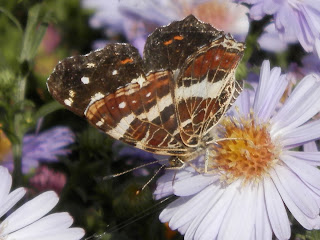 The garden was starting to look a bit parched after several weeks of glorious sunshine, so this change in the weather is very welcome. 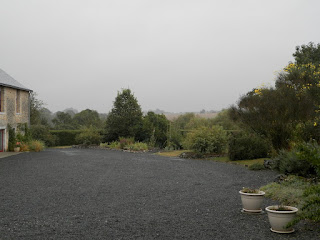 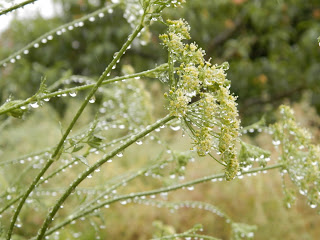 The reaction itself is quite characteristic, is associated only with instant coffee, and is one I have only come across in one other context:  If I drink instant coffee on a daily basis, after about two weeks the skin on the palms of my hands starts to become dry and flaky.  My fingerprints disappear, and my hands start to itch.  At its extreme, I can see little pinhead-sized white spots under the skin, that, when they reach the surface erupt into areas of dry skin. This is accompanied by an increase in the sweat present on my palms, and an unpleasant, almost painful itch that is only relieved by dunking my hands is the hottest water I can stand.

Elsewhere: apparently, competitive cycling can bring it, or something very similar, on in certain people.  I believe that it's also known what metabolic pathway is disturbed, but it's something I haven't really looked into. 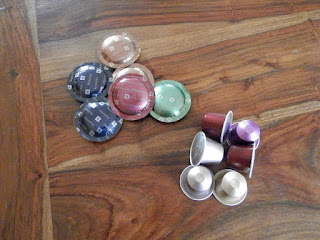 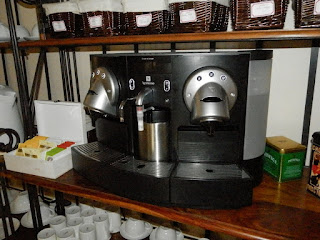 I discovered the cause of the reaction quite by chance, after having put up with it for 20 years or so. (Antihistamine and other creams never really worked).  I got fed up with the disgusting instant coffee with milk powder from the machines at work, that I drank simply because I was addicted to the stuff.  So I weaned myself off caffeine, and miraculously shortly after, my itchy hand symptoms were greatly alleviated.  It took homeopathic sulphur a little time later, to clear the problem completely, and I really don't care if homeopathy doesn't work because it can't.  It works for me, even if it's completely down to a placebo effect.

I used to have a standard espresso machine, but I got fed up with the way the ground coffee would spill whenever I made a cup, so I invested in a Nespresso, with which I am quite content: no allergic reaction to domestic Nespresso.   So I got a Nespresso Pro machine for the gîte as well.

Now Nespresso Pro uses different-shaped coffee capsules from the domestic machines.  Apparently, it's to stop people nicking the capsules from work to use at home.  And here's the thing.  When I drink the Nespresso Pro coffee, I start to get a mild allergic reation to the coffee after a while, just like I used to with instant.  Nestlé tell me there is no instant coffee in the Pro capsules, but I am not so sure.  Or perhaps it is a colourant, or something.  Perhaps even some chemical residue due to the packaging.

So there you have it.  Got itchy hands?  Look at your coffee consumption.  Switch to filter for a while, just to see.  Good luck.
Posted by Mark In Mayenne at 02:14 15 comments:

Wissam Boustany held his Summer course for flute players here at Le Domaine des Hallais this year for the third time.   He came with Aleksander Szram, a highly talented pianist, who accompanied both Wissam and the students.  The course is entitled "In Search Of Inspiration" and it attracts players from all over the world.  I love hosting this course, since I meet great flute players and get to hear fabulous music.  What's not to like?

Wissam believes firmly, and teaches, that music is best played from memory, since this permits the full emotional expression inherent in the music to manifest itself.  At the end of the course, Aleks, Wissam and the students play a concert, and the aim (although not the requirement) is that students be able to play their chosen pieces by heart.

Everyone did, in the event, play from memory.  And the thing that I will remember is that although I spotted, in places, some missed cues, some wrong notes, and some memory failures, it didn't matter at all, because the overall result was so musical. It was a fabulous concert.

And I'm inspired as a result to try it for myself.  At the end of each term, the music school where I am enrolled holds a little concert.  So I am psyching myself up, and learning a new piece (one I played with Aleks while he was here) from memory.

Let me close with a plug.  Wissam and Aleks have released a double CD of flute and piano music.  You can get it on iTunes or as a physical CD  It's called "This Invisible World", it's great, get a copy.   Aleks has also released several solo piano works, including a CD of 20th Century piano music, that, if you think you don't like 20th century piano music, might just change your mind.   Buy this too. 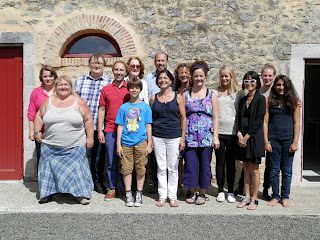 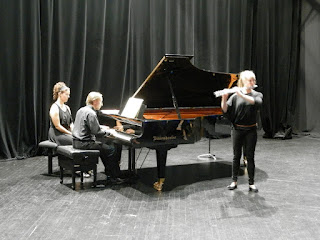 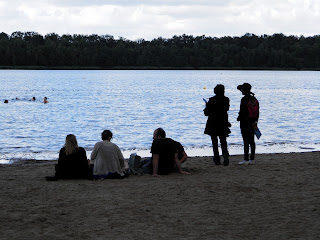