I have an old Dell PC.  It was at the high end of the range when I bought it, but it's a bit old now.   It used to be my main desktop PC running Windows 7, but the Ethernet connection got fried in a thunderstorm, so I relegated it to use as a driver for my music system.  It holds my MP3s and connects to Spotify and other web-based music sources (via WiFi).

I have generally been impressed with the PC itself.  It seems solidly built, and it's maintainable: you can replace the battery easily enough, and can access the disk drives and memory chips by unscrewing a single screw.  What's more, Dell's tech support is excellent.  Their website identifies your PC, tells you what drivers you need and helps with fault diagnosis.  You can quickly get a Dell techie online too, if you get stuck.

It was getting a bit slow, and I was wondering what to do about that.  I was in the habit of keeping it running (in sleep mode) when not in use because it took so long to boot, and then the applications were slow to start.   When I want to listen to music, I prefer not to have to wait 5 minutes.

There were options for improving things;  replace it with a new one (expensive), or perhaps upgrade the memory.  Installing Ubuntu Linux was a possibility, it's supposed to make PCs go faster.  I have heard good things about solid state disk drives (SSDs) too, perhaps I can upgrade it with one of those.

In the olden days of computers you had two types of memory: fast (and therefore expensive) main memory, and slower (and hence cheaper) bulk storage.  The former was originally in the form of tiny magnetic rings and is more recently on memory chips, the latter was and still is to a large extent, disk drives.  Advances in memory technology have meant that you can economically use the fast memory chips for bulk storage, hence SSDs.  (Solid state is an ancient term, used to differentiate transistors and microchips (solid state) from thermionic valves (gaseous state)).

Given that I like the build quality and tech support, I decided to upgrade it rather than replace it, and decided to invest a relatively small mount of dosh in an SSD.

YouTube is a wonderful thing - if you are trying to do something a bit complicated, there is always someone who has done it before, and has posted a video of how to do it.  I fitted the SSD no trouble, installed the Win7, the antivirus, the drivers, and all the software I need (in that order).   It now goes like a rocket.  It takes less than a minute to boot so I switch it off between listening sessions.  Applications load instantly.  I'm a happy bunny.

I did have a problem with Windows 7: I installed the operating system from the disk originally supplied so long ago by Dell.  There have of course, been a couple of hundred upgrades and bug fixes since then, so the PC downloaded them all and then spent an age installing them when I shut it down, and then spent an age failing to configure them and having to roll back, when I restarted it.  I had to do a re-install, and told it to ask permission before it messed around with updates.

The disk comes with a free copy of Acronis disk copying software, the idea being that you can make an exact copy of your old disk then plug in the new SSD in its place.  This didn't work for me either, - the copy failed, but I think it's because I connected it into a slow USB port.  In any case I just formatted the disk and did a cold install instead.

Second-hand Dells are suddenly an attractive proposition, too. 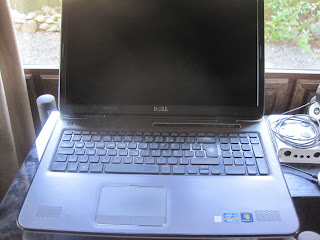 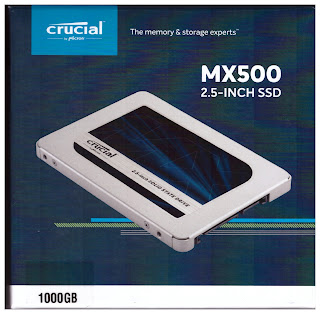 The slogan of the French Republic is Liberté, Egalité, Fraterinté; loosely freedom, equality and brotherhood/solidarity.   These three words embody what is referred to as the values of the Republic.

The French idea of freedom is different from the English, and although I don't know for sure, I think it comes down to a difference in the origins of common law.  An Englishman is (in theory at least) born free, and is constrained only by the specific rules set by the state and by whatever contract he might enter into with his fellow man.  I could be wrong but I think the French laws of Napoleonic origin specify that nothing is permitted unless specifically authorised.   For sure, if you are doing, or trying to do, something that is "non autorisé", you could be in trouble.

On the equality front, the French are pretty hot, especially on sexual equality.  Applicants for citizenship are quizzed on their views, and if you express an opinion that differs from the values of the republic, you might find your application turned down.  I have no insight into comparisons of the equality between or among the elite and the plebs, but England is looking pretty poor on this front, from where I'm sitting.

On the solidarity front, I find the French to be nothing short of impressive.  There are many examples I could cite, but the most recent one involved our local school.  Part of one of its walls fell down, and much of the rest of it was unsafe.  An email went out to local residents calling for volunteers to help demolish the unsafe part of the wall, since local taxes weren't up to the expense.   There must have been thirty people there from a village of 150 or thereabouts, which I reckon was good going.   Everyone did their part, Christian was there with his big tractor; you put the biggest stones in the front scoop and he made a big heap of them farther up the road out of the way.  I brought a pick-axe, cold chisel and lump hammer, plus some pastries left over from the gîte.  Others provided coffee.

I forgot to take a camera with me, so all I have is a picture of the wall not being there, (there it is - gone!) and a big heap of stones.  (More are up the road) 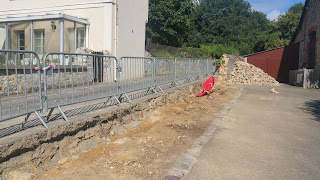 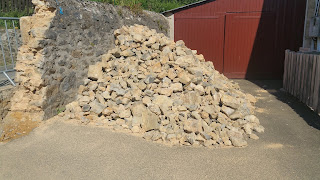 Posted by Mark In Mayenne at 02:55 No comments:

It's been a bit hot recently, in case you hadn't noticed.  The car, left out in the sun, gets very hot inside, on account of the greenhouse effect.  I've always been suspicious of the efficacy of these windscreen insulators, but I'm getting fed up with burning my back on the seat when I get in, so I thought I'd give one a try.  They're not expensive, after all.   It does, in fact, seem to improve things.

It comes with instructions, including "Do not use [this product] whilst driving".   No, really?

I'm wondering if this is the legal department getting creative ("What could possibly go wrong that we should defend ourselves against?") or someone really has tried to use it while driving, crashed, and then tried to sue the manufacturer. 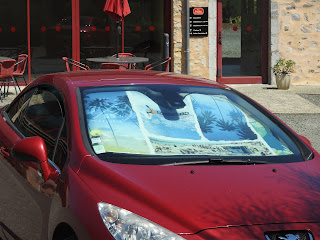 Posted by Mark In Mayenne at 04:37 No comments:

I can remember when Ethernet was young, and it was battling it out with the Cambridge Ring as a system for connecting computers.   The Ethernet protocol was called CSMACD (carrier sense multiple access / collision detect) which probably explains why a different name was chosen for commercialising it.  The advantage of the Cambridge Ring, a token-based protocol, is that performance degraded gracefully as the system became more heavily loaded.  Its disadvantage was that the cable had to be in one big loop connecting everything; it had to go out to, and back from, wherever it was going.   Ethernet on the other hand, would suddenly hit a performance wall as the load increased, but had the advantage of only needing the wire to go out to the computers it was connecting. (Well 8 wires actually but there is no need for a closed loop)  A closed loop is also much more vulnerable to the man with a spade cutting your cable, and Ethernet is more resilient to this kind of problem.   As we know, it was Ethernet that won, and as it happens, in 40 years of using it, I don't think I have come across a performance bottleneck.

Our telephone line comes to our house supported on long poles that are, at a certain point, the highest things on a nearby hill.  Lightning loves it, and we get zapped more often than we would like.  Most recently, it fried Anita's PC, via, of all things, the Ethernet connection to which the spark had jumped.  Not only did it fry the PC, but the cable that passes through the wall to connect it to the router no longer works either.  I have spent the best part of an afternoon trying to work out where the problem is.

The difficulty in this kind of diagnosis is that you can't leave anything to chance.  You have to know that the test kit is working, know that a certain cable is good.  Negative results must be confirmed by careful re-checking.  Anything unknown is going to come back and bite your bum.  The result of careful testing is that I believe I need a new wall-mounted RJ45 socket.  I will get one this afternoon, but I might wait until tomorrow to connect it.  Had enough of this crap, basically. 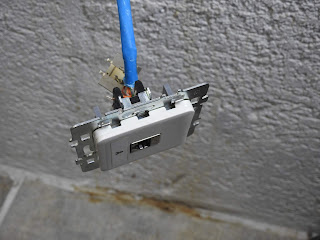 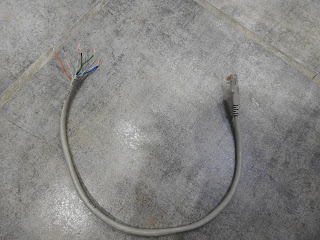 P.S.  I fitted the new socket this morning and it works.