This is a handy little device - it's good for one thing only, that is cutting plasterboard, but it's very good at it.

It has two main body parts as you can see, with a gap between them.  The body parts are attracted together by powerful magnets but a gap is maintained between them by hinged spacers, and there is a cutting blade prodtruding on each side of the gap.

You push plasterboard into the space between the bodies, or rather you slide the cutter's handle part along the top of the plasterboard and the bottom cutter part follows along underneath.  The spacers hinge out of the way, and the magnets hold the two bodies tight against the plasterboard so the blades then cut both sides of it. You can then snap the board.  The blades are elongated so it tends to cut in straight lines, although it will do curves.

They call it a blade runner, and I couldn't find a supplier in Europe.  The best I could find was one in Australia, and it cost me more to ship it than to buy.  There's an opportunity here for an enterprising importer. 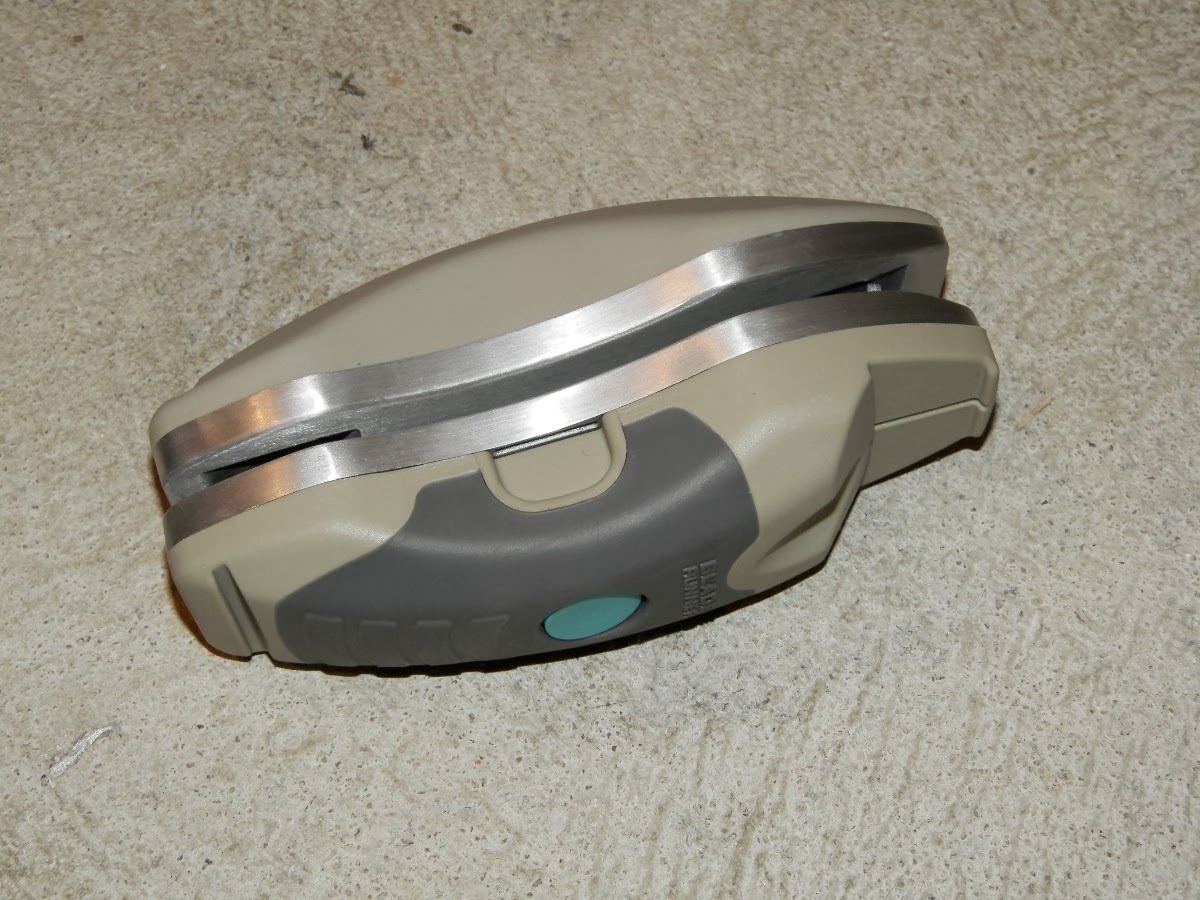 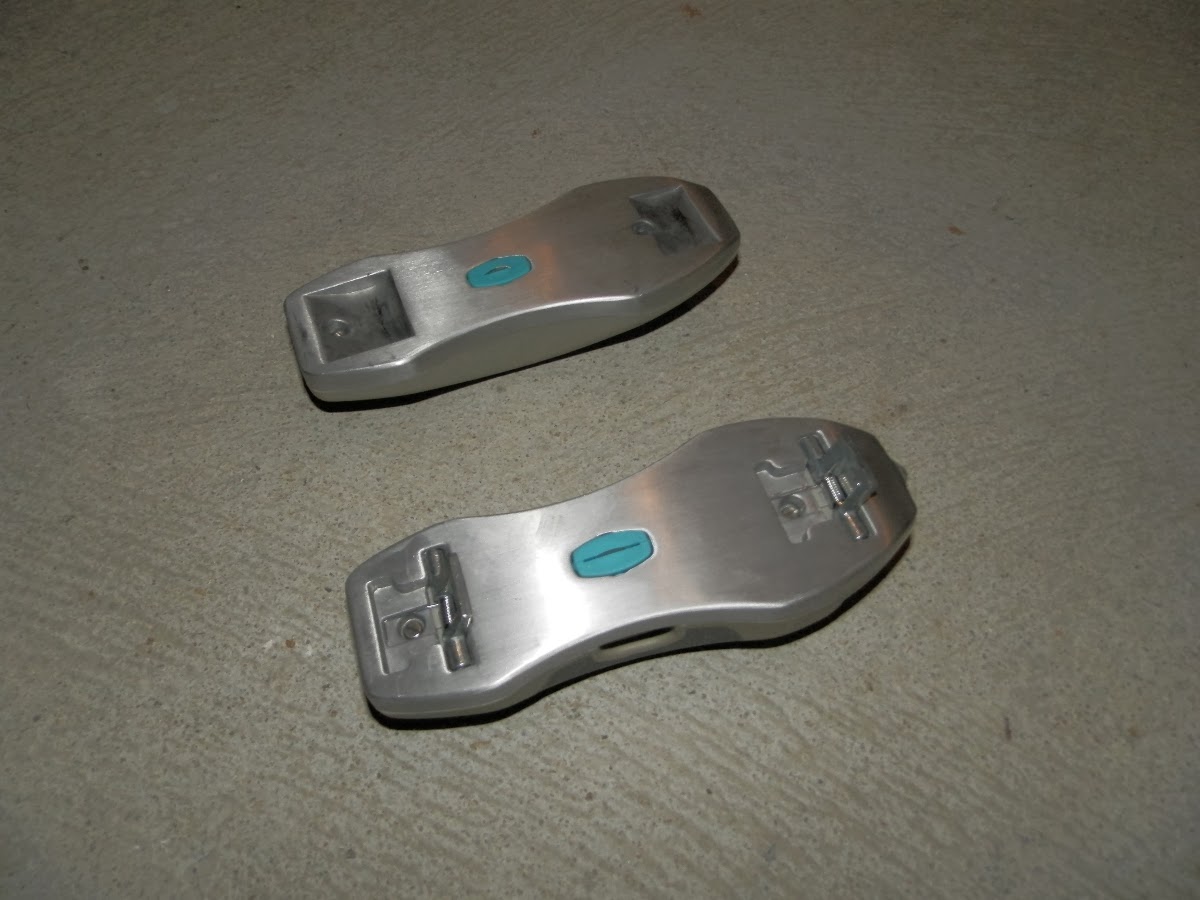 A new restaurant opened in Laval recently.   Le Bistro d'Elise is in a new business office complex that looks pretty austere from the outside but is none the less well-appointed and comfortable inside.  We went there recently with some friends to try it out; there is nothing extraordinary in all that.   But this restaurant is run by Marie-Elise who also runs the Restaurant du Canyon that is just down the road from us, and there is a story behind its opening. 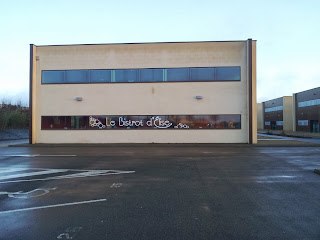 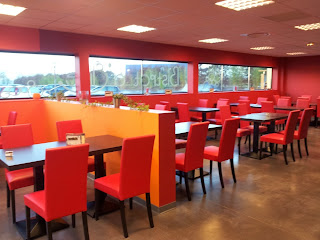 Some time ago, when I had a proper job, I read a book on negotiation entitled "Getting to Yes".  It's a very good, and consequently very successful, book on negotiation in general and business negotiation in particular.   One of the techniques that it prescribes for success in negotiation is to develop your BATNA - your Best Alternative To Negotiated Agreement; the answer to the question "What is the best that I can do if I walk away from this negotiation".   It makes a lot of sense - the less one has to gain from a negotiation, the more powerful one's position.

As I have mentioned before, there is a project in place to develop the site of the Grottes de Saulges where Marie rents the Restaurant du Canyon.   Although nothing is firm yet, it looks like the current restaurant building will be converted into a museum, and the restaurant moved into the adjacent, currently disused, mill.  Marie has a number of concerns about the new proposed restaurant, and it is possible that she will not continue to operate there after the changes have been made.   She has the option of accepting the new, smaller restaurant on terms yet to be defined, or she might decide to claim breach of contract on her current rental and demand compensation for the loss of the goodwill that she has built up over the years.   The new restaurant is her BATNA, and it seems to be doing very well - in fact, a lot better than was intially predicted.

I don't know if Marie has read "Getting to Yes"; some people act in a textbook way either instinctively or through experience.  But, well, top marks to her. 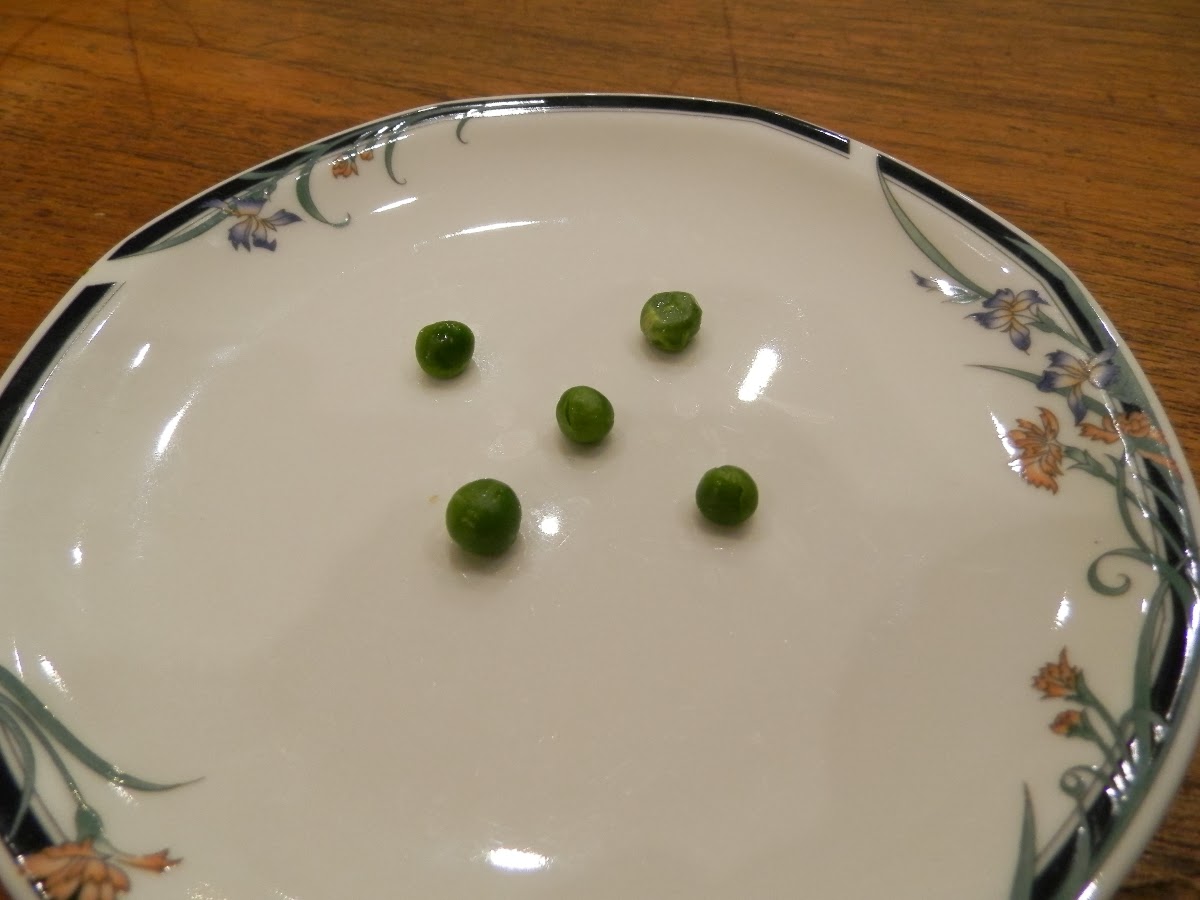 How often do you pea?

Posted by Mark In Mayenne at 09:58 No comments:

I am in the unusual and temporary situation of having to cater for myself.  Before she disappears, Anita likes to make sure I'm going to have enough food around not to starve, so she makes a good effort to buy a stock of things that I am prepared to cook for myself and that I like.

I am not a bad cook.  Nothing like as good as Anita who is a first-rate cook when she puts her mind to it, but I can follow a recipe and turn out a decent meal when the motivation strikes.  The main problem is that motivation doesn't strike very often, and not at all when I'm on my own.  I simply don't see the point of preparing an elaborate dish for one.

What's more, since the meals aren't magically appearing at about the right time, I only start thinking about food when I'm hungry, by which time of course, it's too late to prepare anything that isn't quick.  So although I used to ask Anita to buy in some chops or a piece of steak or something that I can cook with some trimmings, when she came back, what was left in the fridge was always moldering pieces of meat and some furry vegetables.

So Instant Microwave Meals For One it is, then.   I must say they've improved a lot over the years, though the portions are a bit miserly.  Today's was a pasta-in-a-pot thing from The Laughing Cow, a brand owned by Bel, about whom I have written before.  It wasn't bad, although, inevitably, there was a lot less to eat than you might imagine from the package.  It took two minutes to cook and about the same to eat. 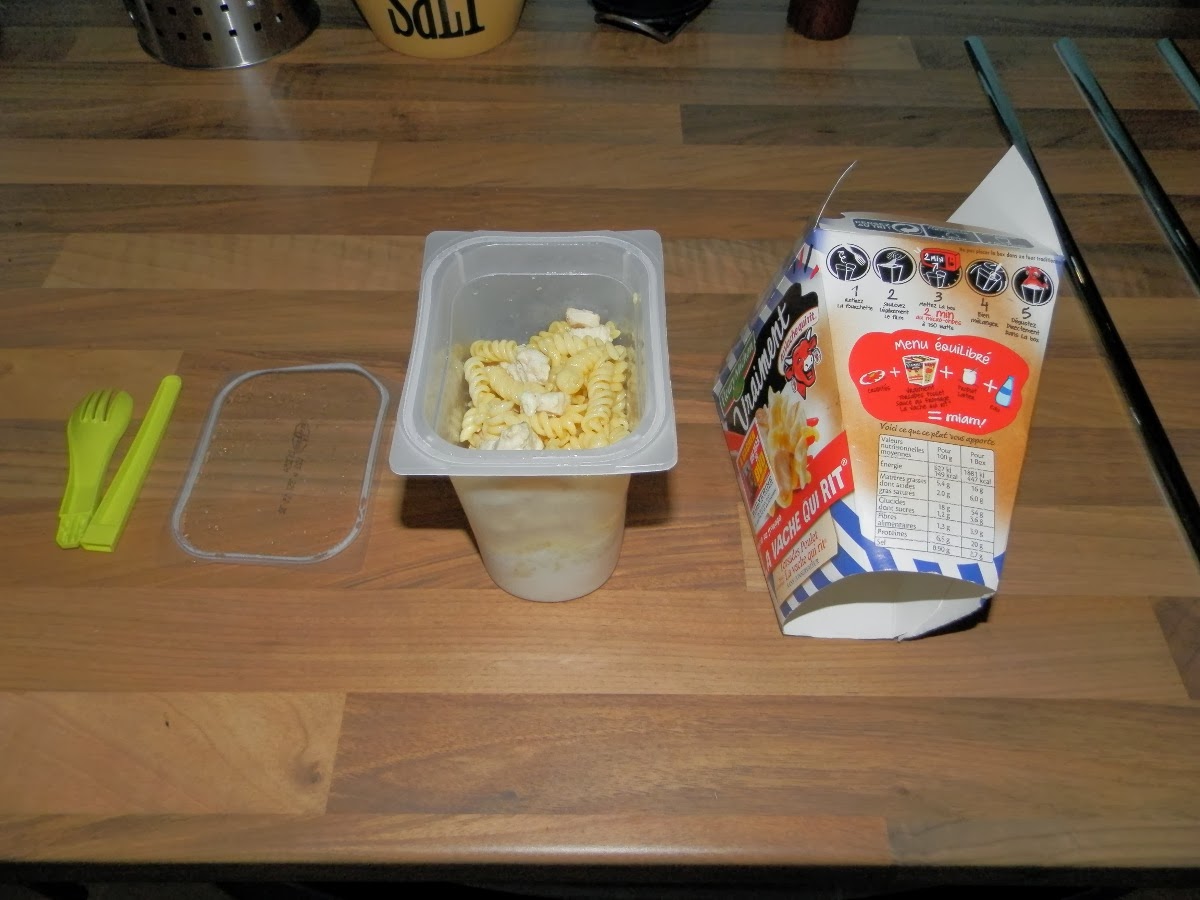 The little animated video "Dumb Ways To Die" is a safety gimmick intended to stop people walking in front of trains, that "went viral".  It shows, using simple but effective animated graphics, lots of ways of killing yourself, including "doing your own electrical work".  Well, my own electrical work is what I have been doing.

The electricity supply here is three phase, that is, three separate lines of 220 volts a.c. each are supplied, each one 120 degrees out of phase with the other.  It was commonly used when connecting heavy users at the outskirts of the network, since the individual current drawn down each phase is less than if it all goes down a single phase.  The result is, however, that although each separate live wire is at 220 volts with respect to the neutral wire, any two live wires are at about 380 volts with respect to each other.   And whereas a 220 volt shock is painful, 380 volts will kill you.

The distribution box in this house is one of the nastiest pieces of electrical knitting I have seen; I am going to have to replace it and bring it up to current safety standards, but in the mean time, I've connected in the hob, the oven and the sockets in the new kitchen.    As any sparky knows, problems with electricity usually manifest with a bang, a flash, or both.  Anita's unannounced flash photography was not appreciated, resulting as it did in a new personal best at the backwards-leap-from-squatting event.

And while you're here, here's a picture of the sunrise the other day, that made me glad I'm not a shepherd. 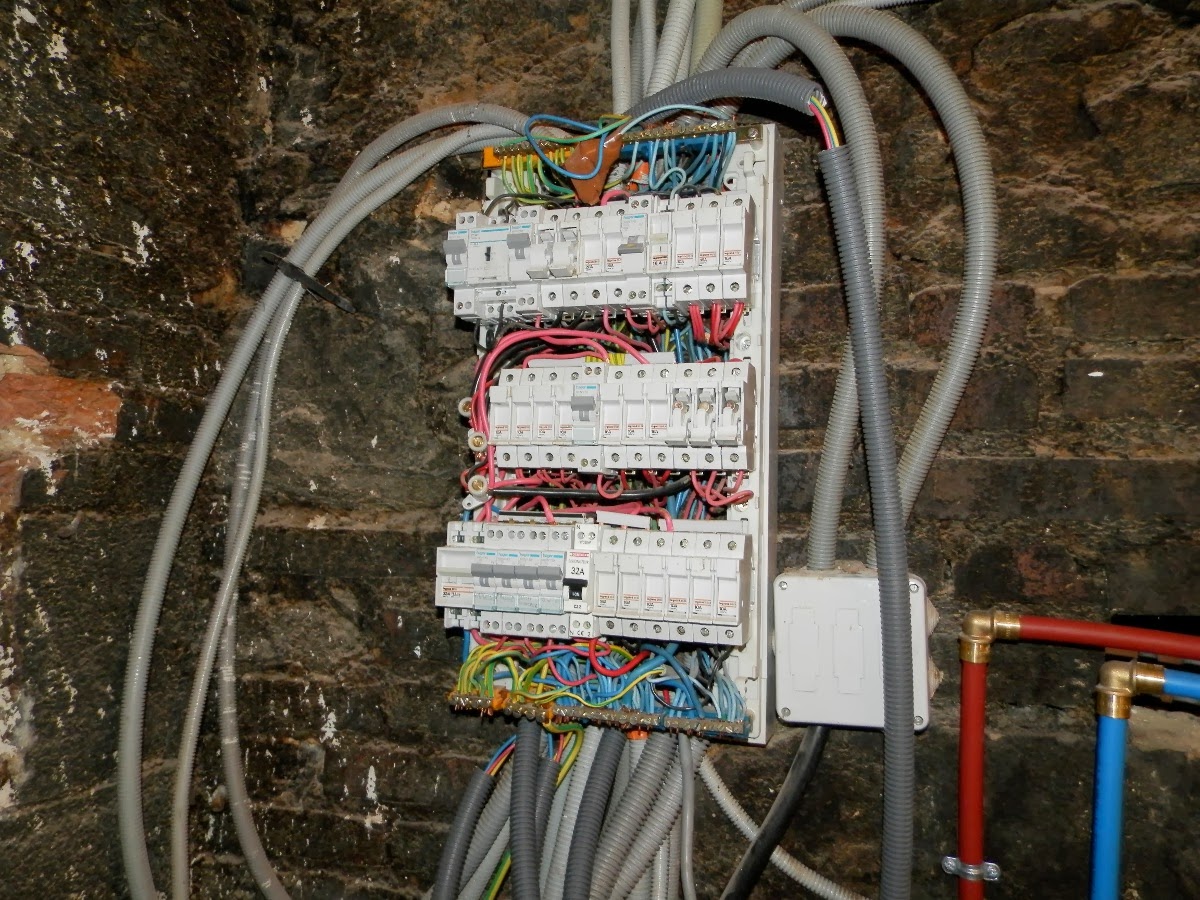 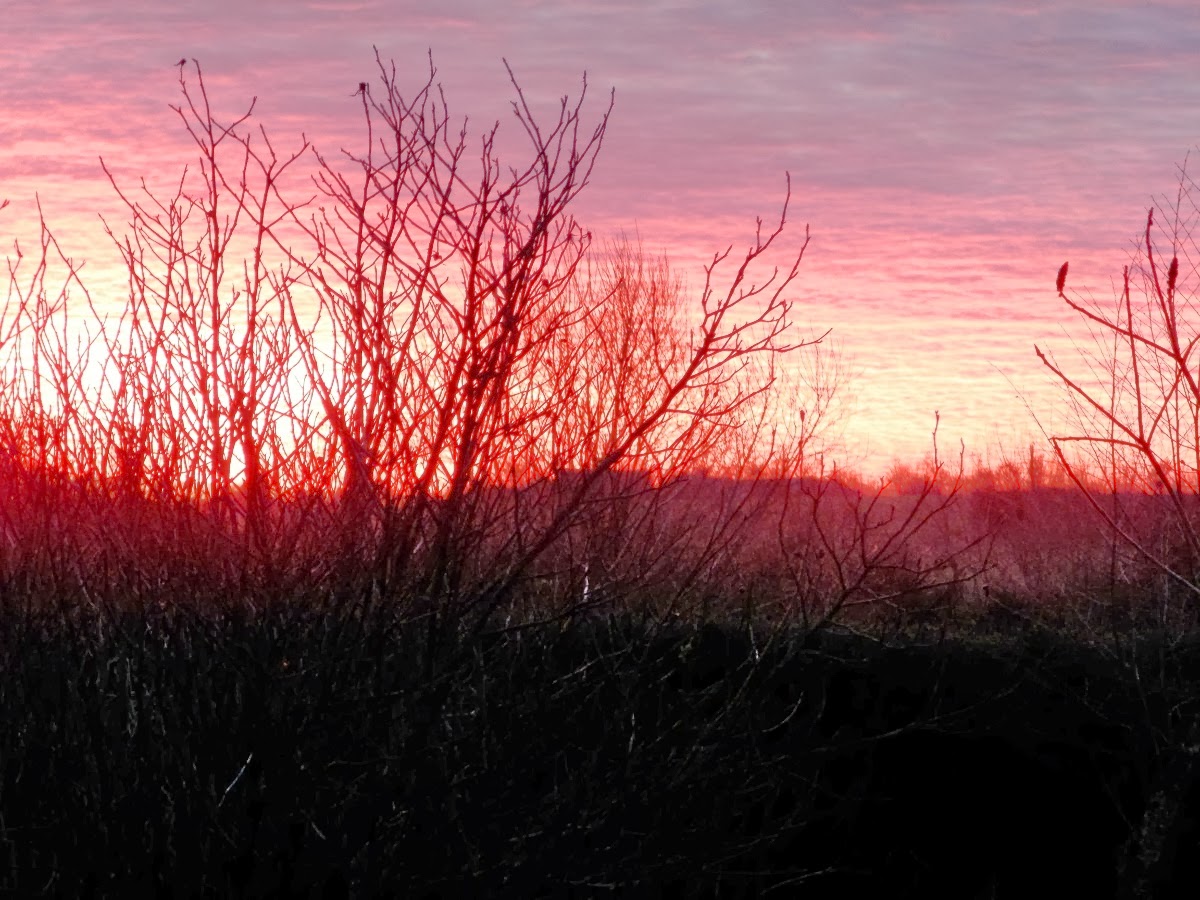 These are the last pictures of the kitchen project that I'm going to post; it's all over bar the shouting.   It all works, there's a bit of finishing up to do, but nothing dramatic.  Good. 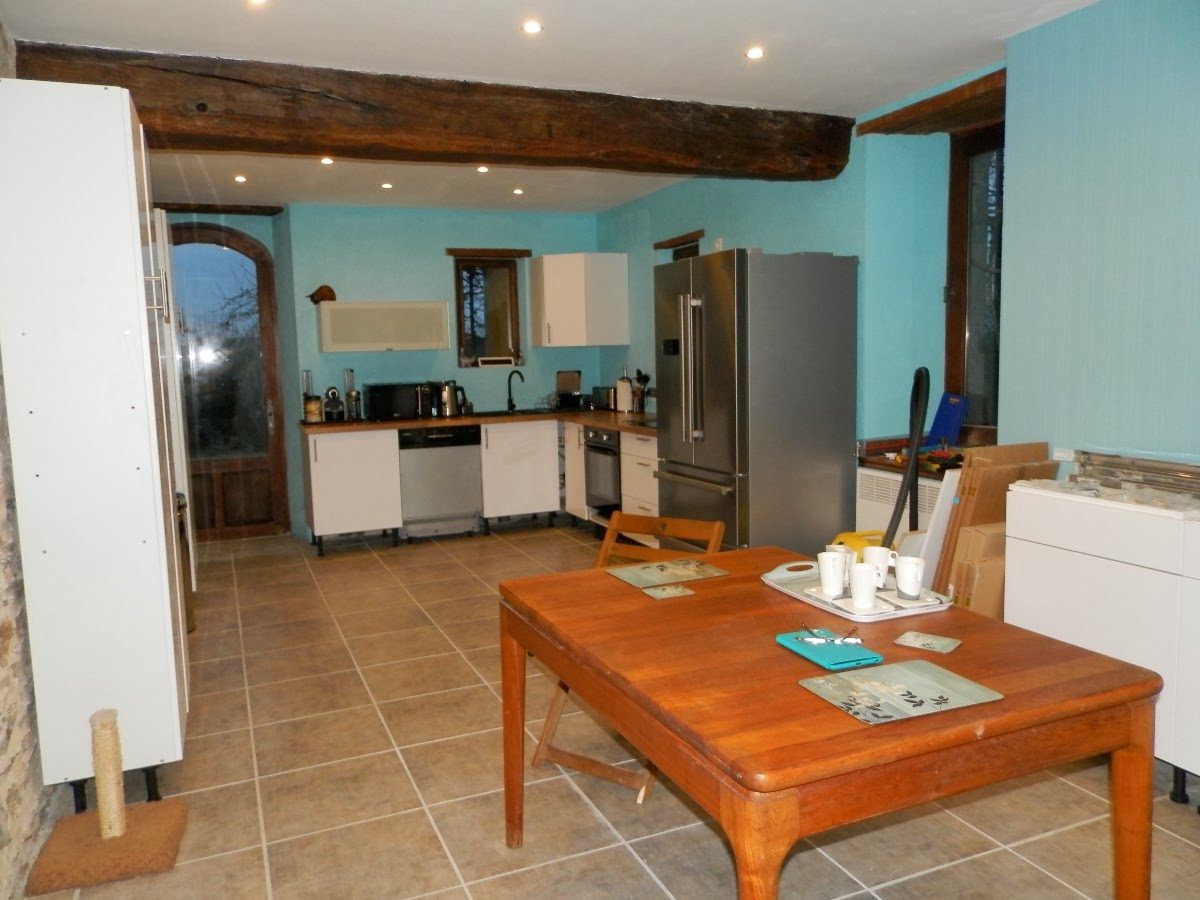 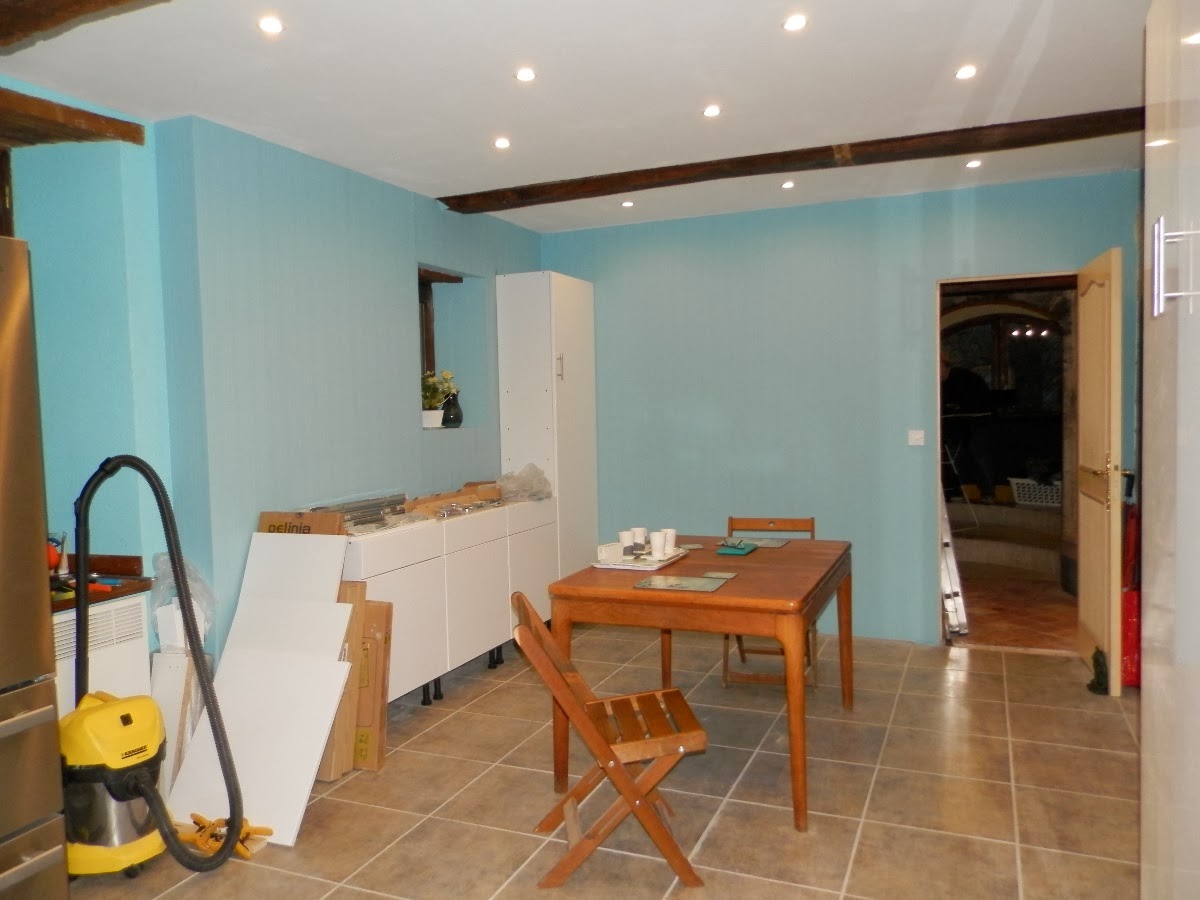 I haven't used a router (fr: une défonceuse) before, but to make an invisible right-angle joint in a kitchen worktop, you really need one. In combination with a template (fr: un gabarit) to guide the cutting blade, you shape the interface between the two pieces of worktop, and also cut the dog-bone grooves that accept the clamps to clamp the two pieces together.

The router needs to be rated at 1 kilowatt or more so that it can cut easily through a thick worktop without the cutters jittering, the template is designed to be used with cutters of a specific diameter, and a bush of the corresponding size needs to be fitted to the router.  You need to get a  few things right for it all to come together. 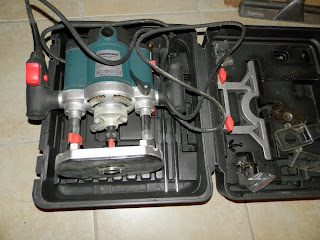 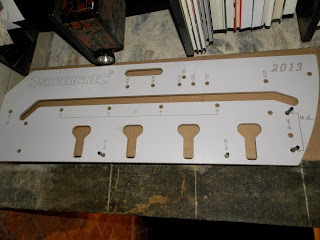 The router cuts leaving a very clean edge, and I'll use it to cut the worktop to length, and to cut out the holes for the sink.

As for the rest of the kitchen, we've painted the walls, papered over the plasterboard and started assembling the cupboards.  The place is starting to look like it might turn into a proper kitchen one day. 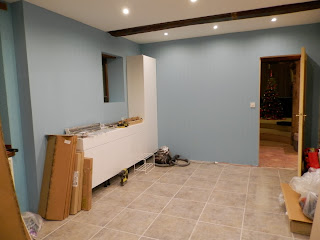 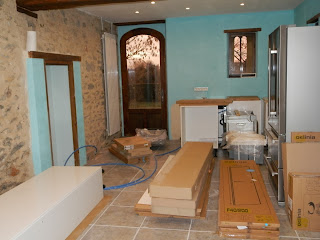 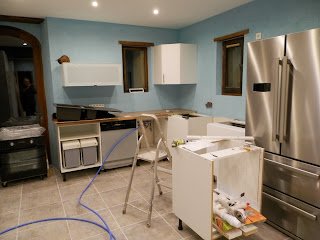 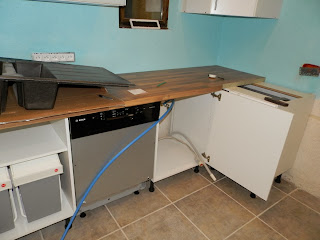