Almost ever since I started playing the flute, I have found that getting away from it all for an intensive flute course for a few days is a special pleasure. So I am delighted to have hosted at Les Hallais, for the second year running, the flute course entitled "In Search of Inspiration" run by Wissam Boustany, international soloist, chairman of the British Flute Society, and general good guy. Running for a week, involving flute players of any age, nationality, aspirations and standard, it's a true festival of flute-based music-making. It's also a great opportunity for me to meet old friends and make new ones.

We held our end-of-course concert last night, and it was a great success. Everyone on the course played, and Wissam also presented a piece. Although I don't formally participate in the course, Wissam was kind enough to invite me to play as well. The programme covered styles from Bach to contemporary via Latin-American, and also included a piece by one of the course students.

It's held in the pretty local church at St Pierre sur Erve, and I transport one of my pianos there for the event. This is harder than it might sound, achieved only with the help of some local muscle, co-ordinated by the mayor. The mayor rode on the other edge of the trailer, to balance the piano 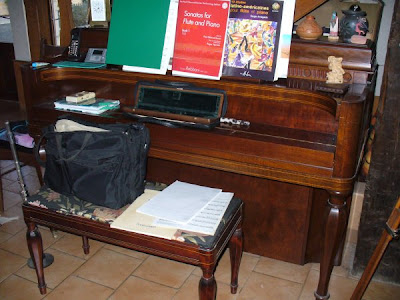 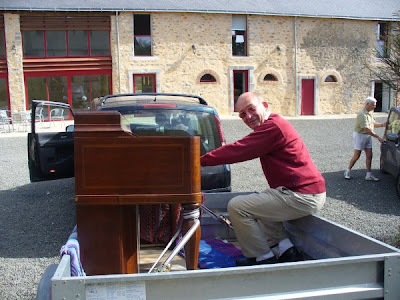 The audience comprised locals, the mayor and other dignitaries, with a special showing of some of the brits from the area. We were treated to a reception of sparkling wine after the event.

I am often troubled by performance nerves that can kill my performance, and I find it frustrating that this prevents me from communicating what I love about the music. But this time, for whatever reason, although I had felt increasingly nervous (and played correspondingly badly) leading up to the performance, when the time came for me to play, I was up for it.

So despite the stress of the situation that everyone feels, I think I played musically, which is the main thing. Yes I know I fluffed a note or two, the intonation was dodgy in places, and for a few bars the piano and I were walking separate paths, but well, it worked anyway. Perhaps it was down to the special atmosphere of the course.

Now everyone's gone home. I'm exhausted, but I have great memories of a bunch of wonderful people and fabulous music-making. And if you're one of those people reading this - thank you for a special week. It seems too quiet now.....
Posted by Mark In Mayenne at 05:32 7 comments:

I read once a story of a scientist who had a lucky horseshoe nailed above the door in his lab. When asked why it was there he said "They say it works even if you don't believe in it"


Quite what this story means I'm not sure, but perhaps we sometimes need to accept that things might work even if we don't understand why. So today I'm pointing you, my avid reader, at the Blogblast for Peace, which is a simple enough concept, and has the ambitious aim of getting every blog to have the same blog heading on the 5th November this year, a call for peace. And I am calling on you to participate also.

Run by an energetic musician somewhere in the deep South of the USA, this scheme has been running for some years now, with increasing levels of success and awareness. Click here to read more.
Posted by Mark In Mayenne at 03:52 1 comment: 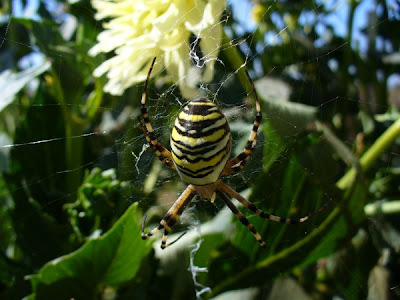 These are called wasp spiders, and this one's body is about the size of the end knuckle of my middle finger. Climate change means they are colonising northwards, and now live across the South of England too. I'm told they bite but they're not poisonous to humans, so they're not dangerous. Yeah right. I don't think I plan to test that any time soon.
Posted by Mark In Mayenne at 03:24 4 comments:

We hosted a course on bien-être last week, which loosely translates as "health and vitality". The subjects covered include excercise, relaxation, massage, and healthy eating.

As you can imagine, the course organisers were exacting in their requirements for meals: organic (bio) produce, two vegetarian meals per day, with meat, only white meat or fish, only at lunchtimes. Fresh ingredients to be used wherever possible. The wife came up trumps with a bunch of imaginative and tasty recipies that everyone appreciated, to the extent that people applauded when she came out of the kitchen.

I did my bit with fresh herbs and veg from the veg patch. I'm a bit disheartened by the excellent fruit and vegetables you can get in the supermarkets here, and they're not expensive. But nothing beats organic food, tasty and fresh from picking, grown in your own garden. And I know for sure that it's had no pesticides, and only organic horse manure as fertiliser. (Mind you, you never really know what the horse has been eating...what do horses eat, anyway.... maybe not what you'd expect....."Hello, my name's ....Dobbin.... and I'm a........ carnivore....."?)

I grew loads of curly and flat-leaved parsley, which came in handy for many of the recipies. 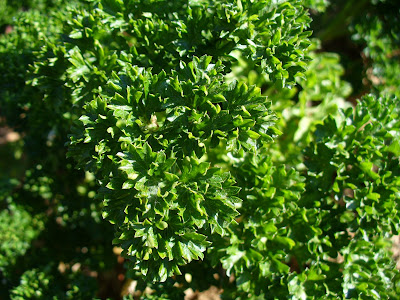 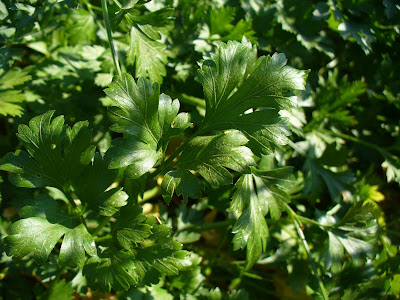 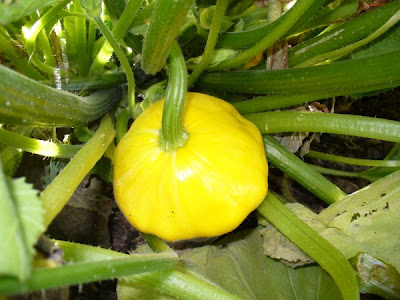 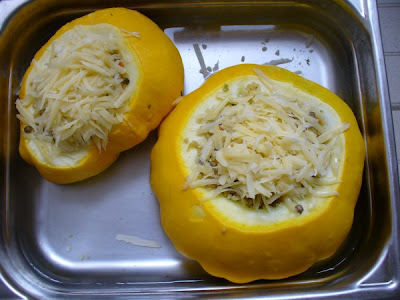 What it says on the tin

I have a great respect for those people who work in advertising who manage to create slogans that enter into common usage. Sometimes I find them annoying, but that doesn't in any way detract from the genius that creates them: it's difficult to do. Did you know that "An apple a day keeps the doctor away" was an ad campaign? Or that Kiwi Fruit is a brand name? (With apologies to my non-UK readers)

One such saying comes from an advert for wood preservative, the first of which explained that the product "Does what it says on the tin". It's some years since I was in England when I first saw this campaing but the phrase still stays with me as a hallmark of straightforward workmanlike integrity. 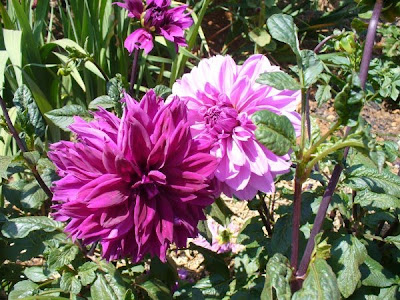 Well I'm sure that when I bought my Dahlia tubers, I bought two packets of tubers with light blue flowers. But here I find myself with light blue and a dark blue. I suppose I shouldn't complain, since now I have an extra option for my garden, but it's not what it said on the tin (well, OK, packet).

Another challenge with Dahlias is that you can't identify flower colour or shape from the tubers or cuttings, so you have to label carefully to keep track. I have to confess to some failings this year. So it's not what it says on the label either. OK, my fault....

How did this blue one get here amongst the reds? .....or this orange one here with the blues? 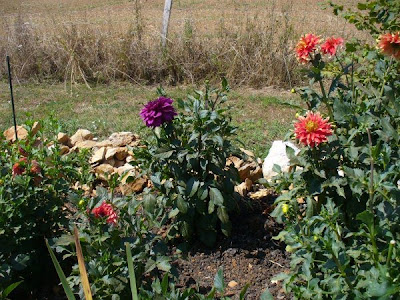 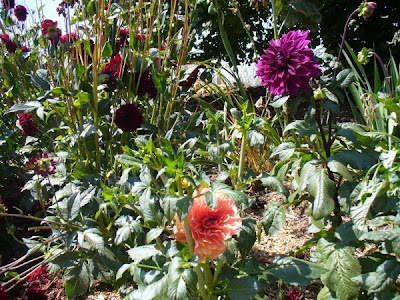 But here's a magnificent yellow cactus Dahlia, right where it should be. 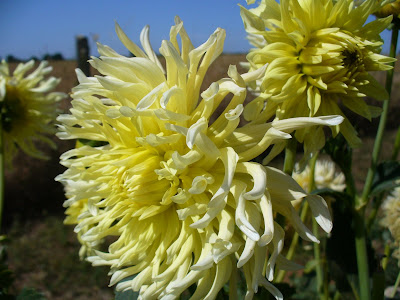 These in my garden, a natural spray, for all my readers who need a bunch of flowers today. And a post-publication edit *gasp!* *shock horror* to show you some waterlilly-flowered Dahlias too. 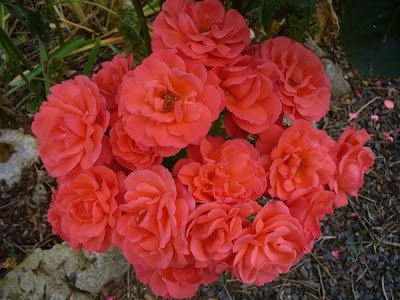 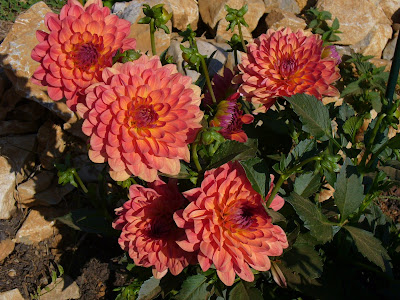 When I took and planted my Buddleja cuttings, I was hoping for a crop of butterflies. Well this fellow is one of many that arrived today, and I managed to get some snaps. 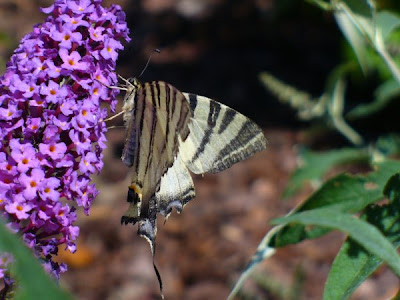 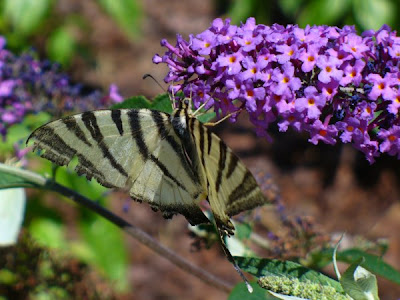 Back home, and it rained all day yesterday. This brings the slugs and snails out in force. But you can find beauty in unexpected places, if you keep your eyes open. 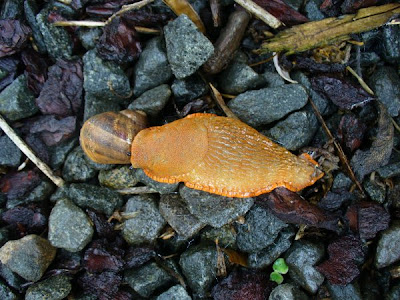 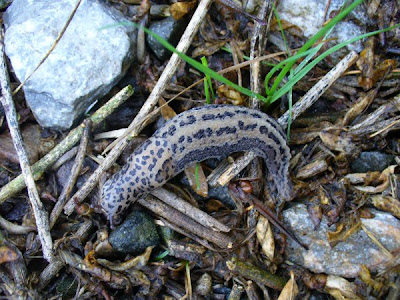 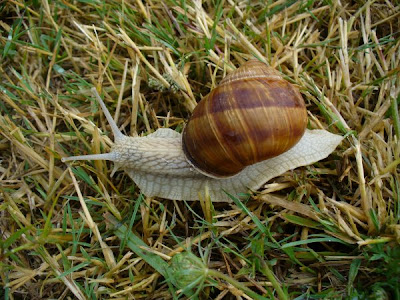 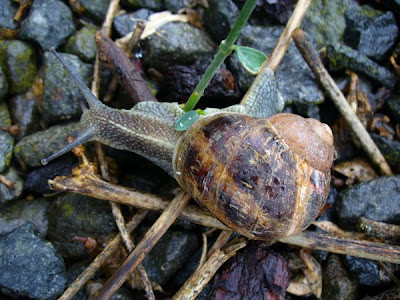 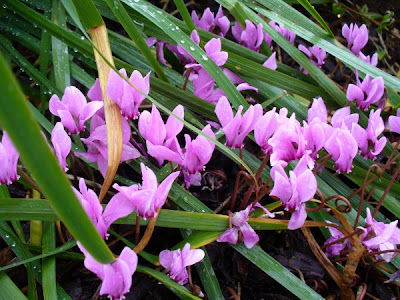 And for some reason, the Cyclamen are also out. Not their time of year, I thought. Well, perhaps they like it here :)
Posted by Mark In Mayenne at 02:38 3 comments:

Well it's day three, and time to go home. But no hurry. How about some more coffee and croissants in that sunny little café? And we can see the city walls and gardens that we didn't get to yesterday. 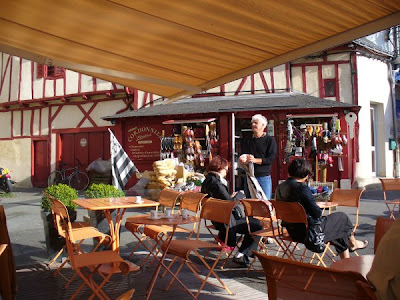 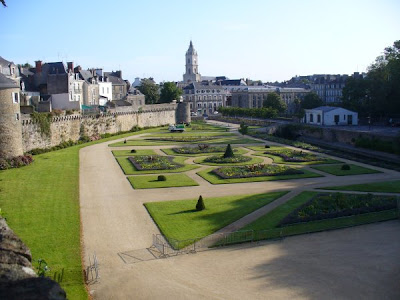 And on the road, via the ruined castle at Elven, with the highest keep in France. I wonder if you could see people waving in England? A beautiful setting, in the middle of quiet woodlands. 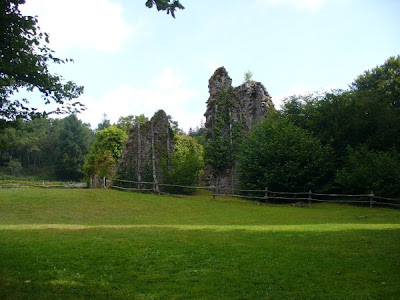 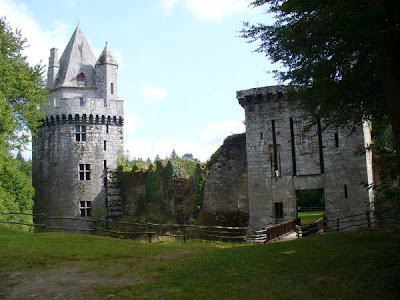 Then on to our last stop, Rochefort en Terre, with its ruined castle, lovely bookshop, and oh-so-cutsey main street. And a sweet shop! More chocolates than you could wave a stick at :) A souvenir necklace for the wife, hand-made to order, a crèpe in a random selection from the many créperies available (featured in the Guide Routard, don't you know) and then, on home. 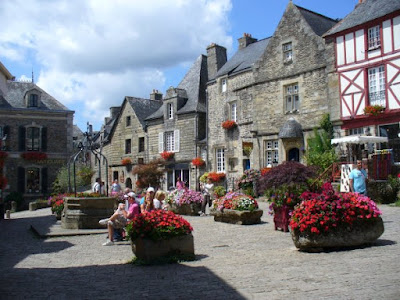 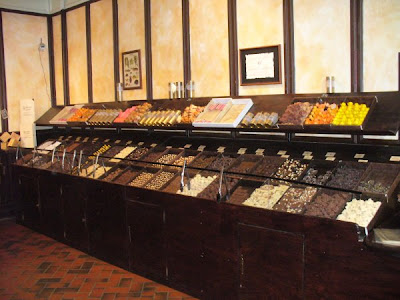 And I have a new concept of heaven: Three months, a sailboard and a stay on the gulf of Morbihan, exploring all the islands, bays, cafés, estuaries, creeks, dunes......
Posted by Mark In Mayenne at 04:23 3 comments: