It seems a long time ago, but the last Friday of of our holiday we went to the fishing village of Portopetro, with a view to having a nice Valentine's lunch there.  Our mobile phone app told us of  "one of the best restaurants on Mallorca", but we walked past it, and on retracing our steps, it was clear that it was closed, most likely for good.

We spotted a nice-looking restaurant above the local yacht club, and we chose this one, with their menu dégustation (option fish).  A fine choice; a fixed price menu with multiple small courses, and 50cc of wine (each) included.   We enjoyed the food, the sunshine, and the views.  And the relax. 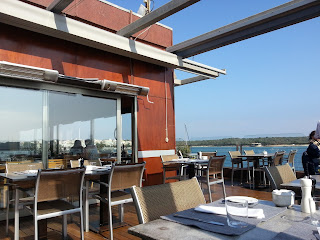 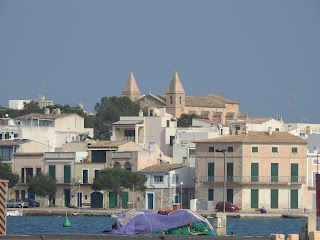 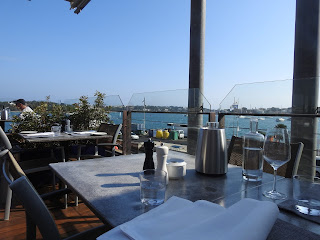 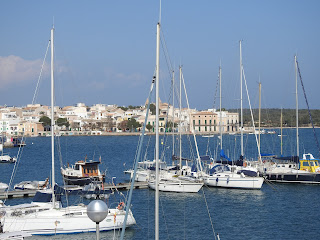 We had a failure of the WifeNav system getting to the Castell de Bellver.  You can see this ancient fortress from the seafront in Palma; it is not too far from the town.  You can also see the town from the Castell.  So we're speeding along the motorway out of Palma, and I ask how far out of town this monument is?
- "Oh, miles"
- "Well, how many miles?"
- "About three kilometres"

A 180° about face and careful return towards the town eventually brought us to a sign to the castle.  It's worth a visit.  And, as they say in France, worth the detour.

Like many of these places, it has served various functions; fortress, prison, royal residence.  It is now a museum, and a stage for artistic musical and theatrical events.   The architecture is stunning, and the site offers fabulous views of Palma. 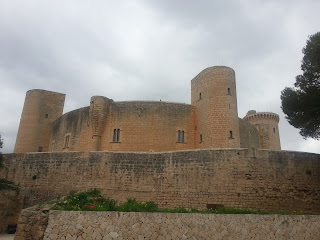 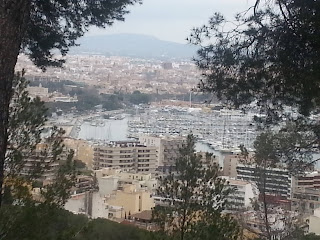 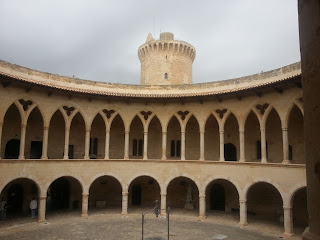 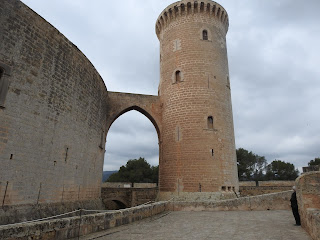 Posted by Mark In Mayenne at 05:34 No comments:

We took at look at the Majorcan East coast, that is known for its fishing villages, and we landed at Cala Figuera, a delightful coastal fishing village at the mouth of a river.  We watched a fishing boat come in and unload its catch, to the pleasure of the local cats.   We saw a black-and-white bruiser, who clearly owned the territory (but avoided people), go onto the boat and swipe the fish that had been left behind.  He was followed by the less dominant cats in their turn. 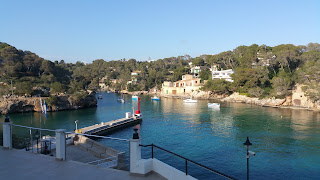 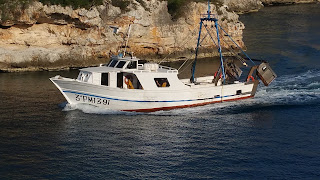 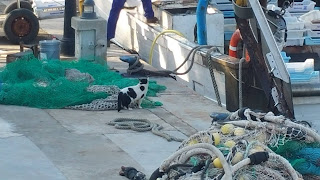 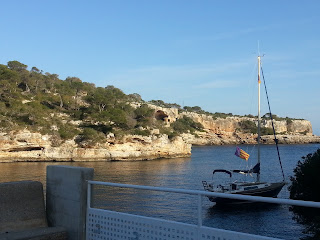 The village features a "photographers' walk" that leads you around the coastal path.  This place struck us a good option for a calm and tranquil break away from it all.

Posted by Mark In Mayenne at 01:00 No comments:

One of the things I like to notice when I am abroad on holiday are the differences in how things are done.  There were a few things in Majorca that struck me.  The first one that I noticed, because it is everywhere to be seen, was how they construct their walls.  In France, a wall like this one beside the road would probably have enduit,  that is a sort of plaster in between the stones on the surface, giving a smoother finish but with the stones less noticeable. These walls might well have concrete behind the stone façade, but the stones remain individual and strongly outlined. 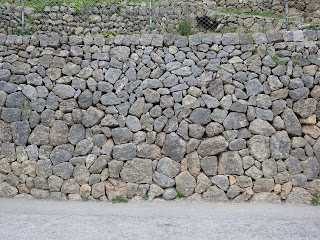 This one was a new one - a urinal with a flap.  I wondered what it might be for, perhaps the drains are so unreliable that the urinals often have to be shut down.  I regret now that I didn't flip it down to see if anything was written on the back. 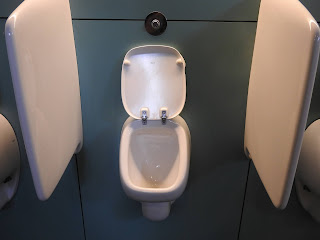 Another subject that interests me is music, and there is a high-level music conservatoire in Palma.  They were having a saxophone festival, with a free concert (of saxes) one evening.  It was a brisk half-hour walk away, and I went along.   It was .... different.

I didn't like the music.  It was contemporary, comprised for the most part of squeaks, beeps and farts coming out of the instrument.  The technical virtuosity of the players was never in doubt.   What was different in the presentation is that no player introduced the piece that he or she was playing, they just came on stage, spread the sheet music out and played.  I didn't have a programme either, but that could have been down to my lack of understanding of Spanish.

The other difference was that, for sheet music of several pages, the pages were spread out along a series of music stands, side by side.  The longest piece had eight, so that when the young lady moved from reading from the 4th stand to the 5th, I figured "good, we're halfway through".

At one point, I told myself that if the next piece didn't have either a tune or a rhythm, and preferably both, I was off.  fortunately, this was followed by a couple of  quartets that were quite tuneful.

Majorca is sprinkled with limestone caves, and you can visit some of them.  We chose to go to the Drach caves, near Porto Cristo, on the basis of advice from the tourist office.  They are quite spectacular.   The tours are guided, and you get an entry time on your ticket.  They last about 3/4 hour

The tour includes a short concert with strings and a harmonium, the musicians arrive on a boat gliding on the subterranian lake.  Their photos on their website are much better than mine, but here are a few to give you an idea.   Not to be missed. 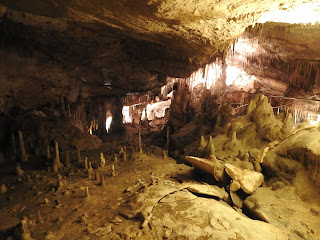 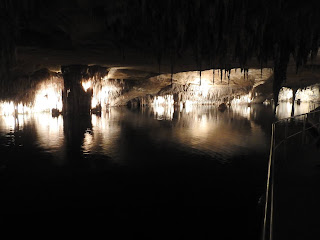 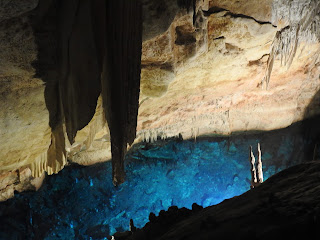 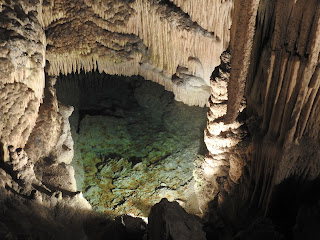 There's a little train that runs between Palma, and Soller on the north-west coast of Majorca, and we asked the nice man in the tourist office about it.  He suggested that we drive out to Bunyola, about halfway along the line, and catch it there: parking is free, the fare costs less, and the section of track between Palma and Bunyola isn't especially interesting.  We took his advice.

We arrived early at Bunyola, parked on the street, and waited around on the platform for the ticket office to open. Which it did, just in time for the train.

The train winds around and between the mountains, goes through several tunnels, and presents spectacular views of the countryside.  It lands you at Soller where you can take a tram to the sea front, or stroll down on foot. 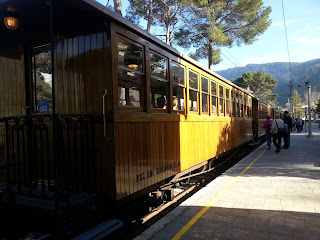 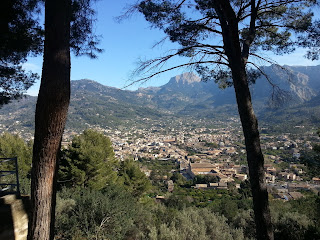 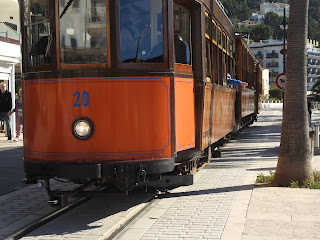 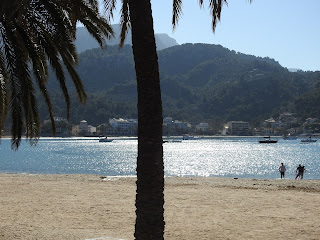 The train and tram are busy enough in February; I think they would be well crowded during the tourist season.
Posted by Mark In Mayenne at 00:05 1 comment:

We're just back from a short break in Majorca.  We'd never been there, had heard good reports, and were looking for somewhere that would at least be warmish.   We had a good time.

We flew out of Charles de Gaulle on a flight that took off about 7:30, so we had to get there early.  It was cheaper to stay overnight at the Novotel at terminal 3, and have dinner there before the early start the next morning, than to take the later flight.  And we got an extra half-day in Majorca.

We had a small apartment not far from the cathedral, and had a rental car for the duration.  Parking was expensive, costing more than the car hire per hour.  We had a Renault Captur, a competent and willing car that cruised happily at 120 kph, did 50 to the gallon with an automatic gearbox and power steering.  Warning:  The driver's side door sweeps back towards the top, and in reaching forward to open the door I swiped by eyebrow with it, drawing blood.  Only did that once.  The fountain is part of the view from the apartment window. 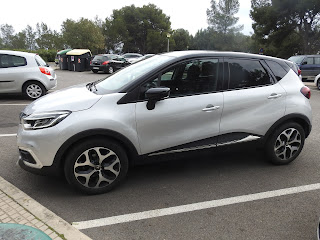 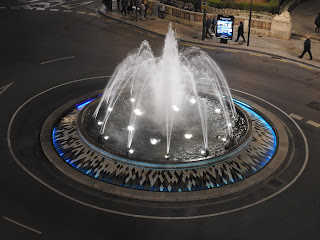 We spent our first, "extra" afternoon in a visit to the pretty estuary seaside town of Andratx, a bit to the west of Palma.  It's out of season, not a lot was going on, so we strolled around, found a supermarket open, and bought some provisions for later in the week. 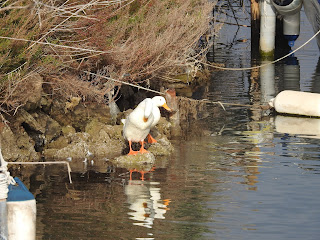 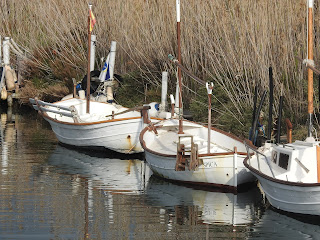