What to do at home?   By which I mean, what is the leisure activity that you do when you have the time and space to do it properly, with all your concentration, at home?  For me, it's music, either playing or listening, and the financial investments I have made in my stereo and its music collection, and my flute and sheet music over the years reflect this preference.

For my brother-in-law, his leisure activity is playing computer games, specifically driving simulators.  We have played football simulators and other game types over the years but it's driving simulators that capture his imagination.  So now that he has done all the house improvements and other DIY projects that need doing, he has invested in a proper driving simulator.  It mimicks a racing car cockpit complete with stick or paddle gear shifts, pedals, sound and vibration effects, etc.

He has done the "career path", starting on go-carts and progressing to formula 1.

I tried it, it's good, not that I'm competent on it. 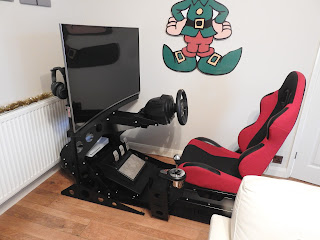 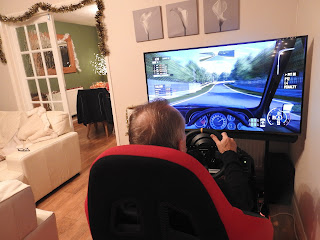 In London the other week, my walk to Top Wind, the flute shop near Waterloo, took me over Westminster bridge.  I thought that London at dusk was looking pretty. 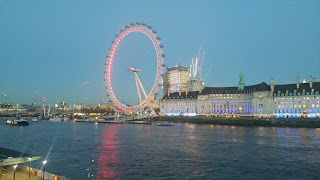 On our way to join a friend for lunch, and being a little early, we took a detour to Bosham.  Such a pretty little village, and seeming quite active with a busy café, and an artists' gallery and shop amongst other attractions.  The sailing club is in what seems to be an old water mill, and the church is quiet and interesting. 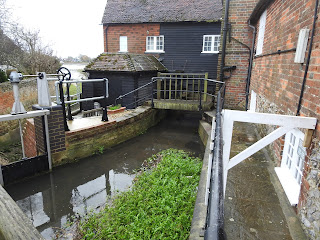 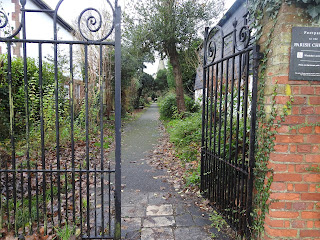 Bosham is featured in the Bayeux tapestry, mentioned as a stopping point for Harold and his army on the way to meet William (later "the conqueror").  This reproduction of a section of the tapestry is on display in the church.

I wouldn't give much for the survivability of the place when the sea levels rise though, and the lintels at the garden gates in the village speak of high tides from time to time. 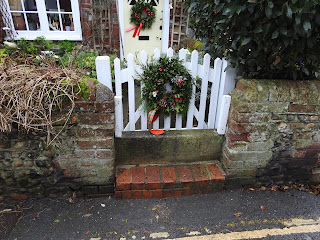 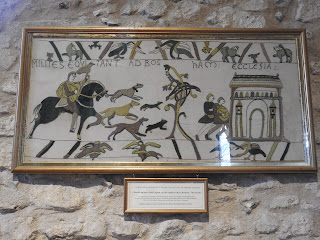 On this special day, I thought I'd share with you the garden decorations put up by one of our neighbours not too far away. 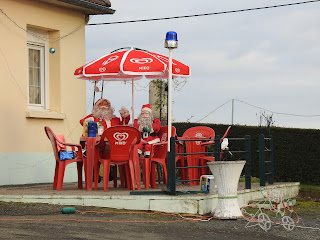 I came across this rather strange and magical rocking horse/chair in a house that is for sale in the village.  It looks like someone has taken a piece of driftwood and made a dreamworld rocker out of it.

It has bedsprings at all four end of the rockers, I guess to stop it tipping too much forwards or backwards, and wings as armrests.  I wonder who played with it, or sat in it, and where they flew with it. 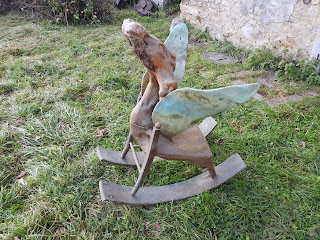 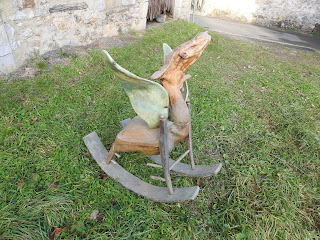 The two opening paragraphs of this newspaper item struck me as quite funny.  It was in The Times, 14th December. 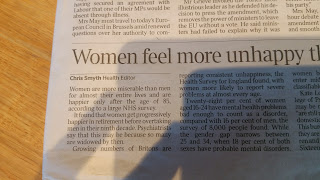 There's a garden centre near Titchfield, beside the ruined abbey, called Abbey Nurseries.  We often go there when we visit the rellies.  It's on a quiet road, and the old abbey makes a pleasing backdrop to the plant displays. 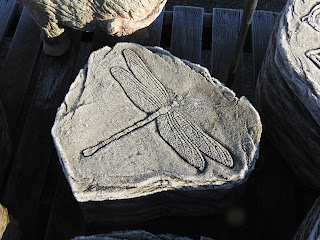 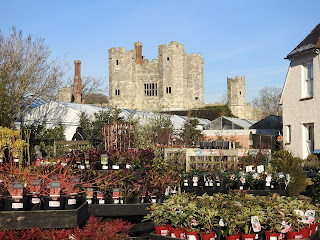 Here's a thing in the shop that puzzled me: these baskets.  A notice just above them reads "Please help yourself to a basket", together with a comment that the baskets are not for sale.  Now I remember in the early days of self-service groceries, a grocer took a person to court on the basis that he had walked out of the shop with a basket of goods without paying.  The grocer lost the case because a notice in the shop said "Please help yourself". 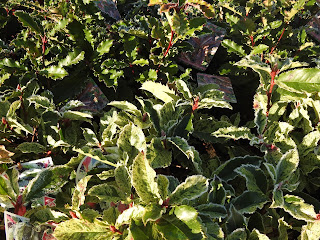 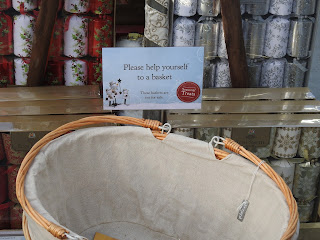 I find it odd that beer and tea are both brewed, but wine is not; it is made.  Apparently this is because boiling is used at some point to make both tea and beer, but not wine, although I think that the fermentation involved makes winemaking closer to beer-brewing than tea-making.

Some friends and I made some fruit wines when we were teenagers, with varying amounts of success.   The best was rhubarb wine that my mate Nick made, and I have long wondered if I could ever make anything as lethal good.

We have a few damson trees in the garden, and they always produce more fruit than we can eat, and this struck me as an ideal source of raw material that I could use to test and re-hone my skills.   So while we were in England recently, I bought  a set of wine-making gear from a nice chap at 4u2brew Ltd, a shop in Fareham that sells such stuff.

Here it is; all I could need: a demijohn, yeast, airstop, bung, various chemicals, a siphon and a hydrometer.   I have yet to see anything like this for sale in France.   Never seen it at car boot sales, nor spotted any specialist brewing shops.  Mind you the French would probably think you were a bit mad, trying to make wine with anything other than grapes.

I will let you all know how I get on.  I'm beginning to think it was a mistake to dig up a rhubarb plant that I had; I'm going to have to wait until plum time. 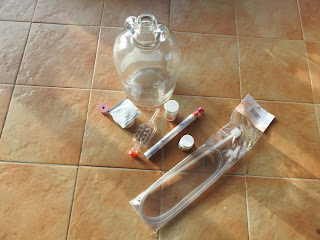 Incidentally, you can get fruit wines in England, I saw some at a garden centre, but it was ten quid a bottle.
Posted by Mark In Mayenne at 02:51 4 comments:

Playing in a harmonie wind band isn't just about the music, it's about the social aspect too.  It's a good opportunity to meet with like-minded people and increase the circle of friends and acquaintances.  And on top of this, there is the opportunity to combine with other harmonies and groups in exchange visits and concerts.

This year, for our end-of-year concert, our harmonie at Ste Suzanne combined with three others to give a concert with 120 musicians on Sunday.  Four harmonies in total; four conductors who took turns at conducting the different pieces.  A good time was had by all.  The programme was of film music, starting with the dramatic Also Sprach Zarathustra, used in 2001 A Space Odyssey.

We of Ste Suzanne will be off in January to join the same groups for a joint concert at Bouguenais near Nantes. 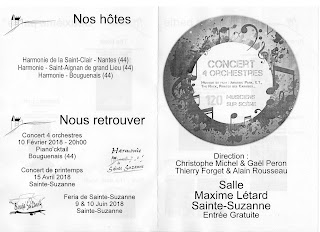 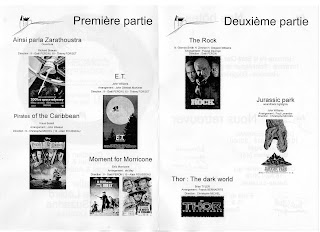 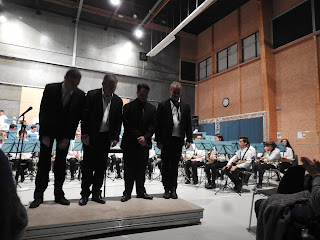 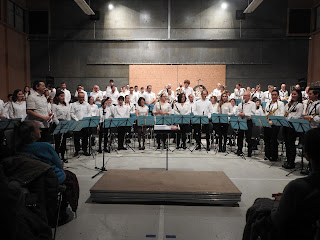 A little walk today where the showers, heavy clouds and low sun made for some lighting effects. 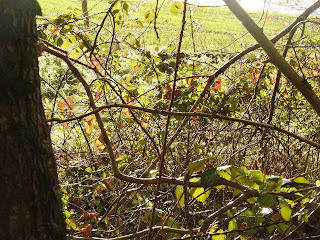 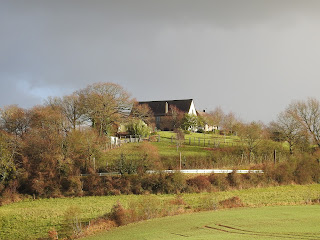 The déchetterie is where you take stuff to be recycled or disposed of, that is for whatever reason, not suitable for the smaller local bins provided.   For example, you take used engine oil there, half-empty paint tins and garden waste.  We have been going there a fair bit recently with garden waste.  Normally I shred and compost all the waste from my garden, but recently we have been cleaning an area that contains a lot of wild clematis.

Clematis is vile stuff; toxic and with a sap that, if you shred the plant, ends up in a fine spray and does nasty things to your eyes and lungs.  So we take it to the dump from where it is shredded along with other garden waste in industrial quantities by huge machines, then composted and distributed (sold?) to local farmers.

Our déchetterie has had a revamp recently.  It's much bigger than it used to be, with a big tarmac on-ramp, plenty of large containers for the rubbish, each one for dumping a different type of material.  There is a container for card, one for plastic, one for metals, and so on.   Much of it gets recycled.

Generally I'm in favour of recyling efforts, although I do wonder how efficient they are.  Does the Earth-saving value obtained from recycling my bins of plastic, glass and metal compensate for the use of diesel to drive there?  How about if you take into account the energy needed to build the place?  Would the planet be better off if I just let the clematis dry out then burn it?  I have no real idea. 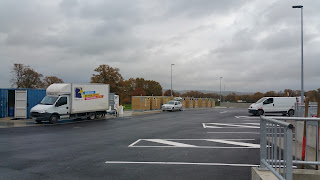 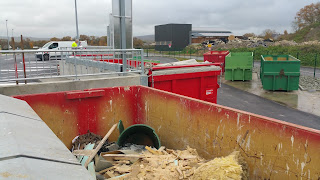 The UK is apparently under a blanket of cold, and France is getting a bit chilly.  The east of the country is apprently under several inches of snow and we have had the first flurries here. 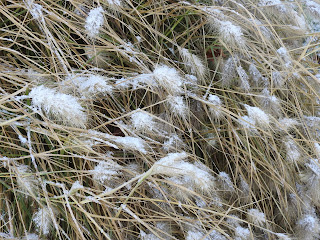 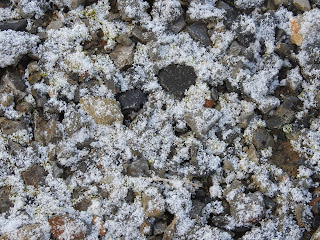