Autumn is here, and this morning in the early mist I went for a walk and natter with my sister who is visiting with her husband. Our walk took us past this lime kiln and kiln-operators cottage, both of which have recently been restored. When I first saw it, the kiln was fenced off as dangerous, and the cottage had no doors or windows, and had sheep living in it. I think they've done a nice job. 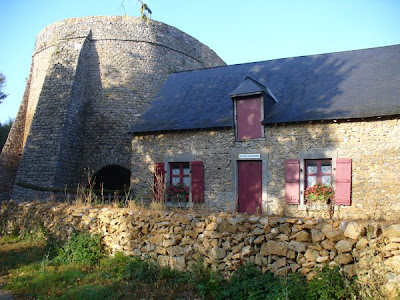 The day of my first flute lesson dawns bright and clear, and the cat takes advantage of the early warmth. The trusty old flute bag is packed and ready... 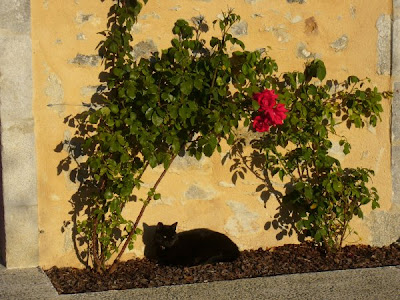 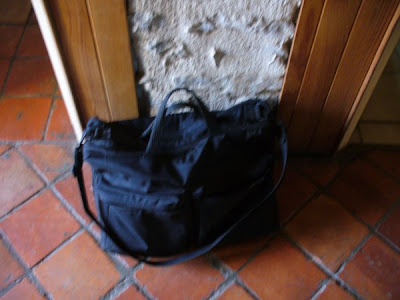 And here we arrive at the famous Evron School of Music. Lesson? Great: nice to have some independent ears catching the things I don't notice (inhaling through my nose?? Since when???), and also, an introduction into the scene of other musicians in the area, with possibilities of playing together. And.... a schedule of work for the next lesson. Can't be bad. 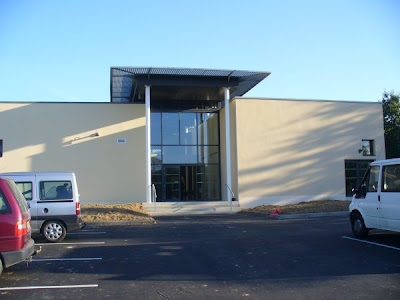 We hosted a wedding reception here last weekend. Big meal straight after the wedding, then an overnight stay, a visit to the caves in the morning, and a big barbeque lunch. Happy guests, they said they are looking forward to us helping them celebrate their anniversaries.

Here is a flower arrangement the wife made to brighten up the reception room. Pretty, eh? Dahlias and Alstromerias. 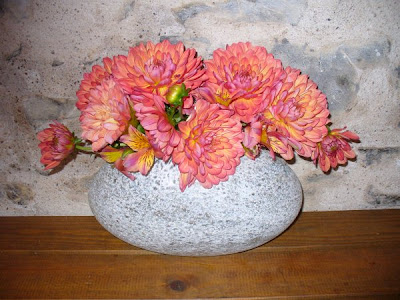 My plum tree has shed more plums that I can possibly use, and many are now fermenting happily on the ground, attracting wasps and butterflies.

Here is a pic of some fermenting plums, and one butterfly, a red admiral. I am sure it must have been drunk because it didn't move at all while I was trying to photograph it. All the other ones moved about a lot, their most annoying habit being to close their wings tight as soon as they stopped moving. 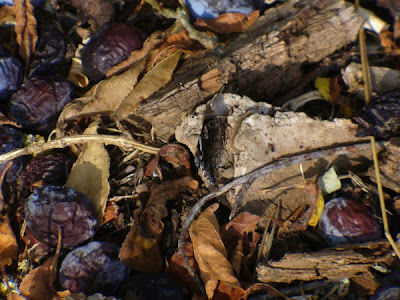 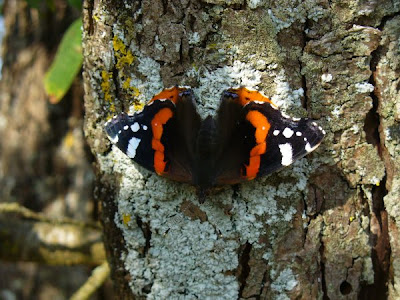 On the right, my old amp, a wonderful-sounding valve (tube) design, output-tranformerless (OTL), and on the left my new, solid state class D model.

Why change? The OTL consumes 450 watts of mains power to deliver 6 watts of audio (1.3% efficient), which in these days of global warming is obscene. The class D amp is by contrast 88% efficient. And dare I say it? I think the class D might even sound better, too. 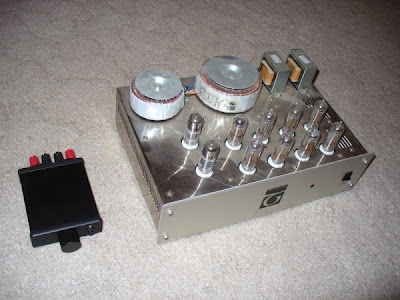 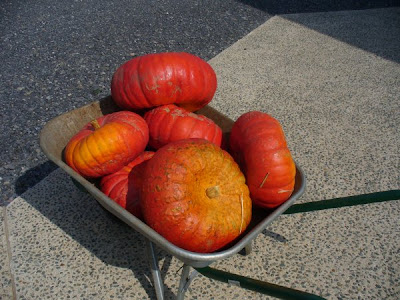 We hosted an "away day" here yesterday, for the company that does our accounts. They have been keeping an eye on our project since its inception, and decided it was time to come and give us a try. Their day out included a cycle to the site, followed by activities in the canyon, lunch there, more activities, and a big barbecue at our place to finish off the day.

They had a lot of fun. There was archery, rock climbing, hiking along the footpaths, one group visited Saulges on foot, the other St Pierre sur Erve. 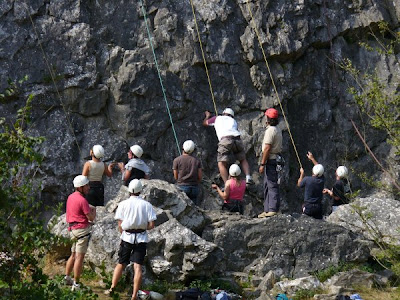 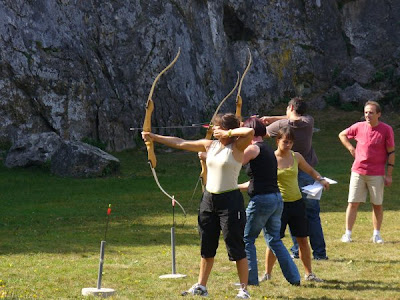 One of the games they played in our courtyard that I have never come across before, was called "Palets", which translates as pucks (as in ice hockey, for example). The games works very like boules, in that you throw a small iron puck onto a board, and then try to throw other pucks as close to it as you can. They had two versions of it, Breton palets, and a version from the Vendée, where everything (the board, the pucks) was a bit smaller. As an aside, you can get palets bretons in the supermarket, but they are puck-shaped biscuits. Very nice they are too, but I'm wondering which came first, the biscuits or the game? Or perhaps they both derive from something else? 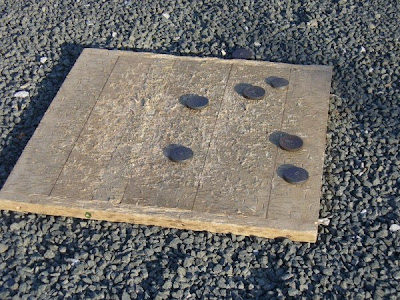 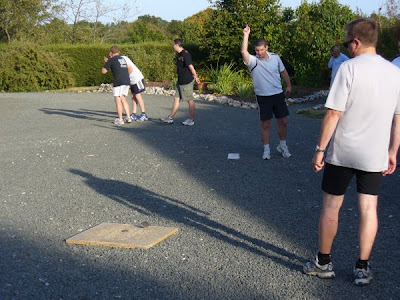 Volley ball in the pool was followed by a sizzling barbecue, and after that people relaxed into the night with games of cards in the lodge. We don't know what time they all went home: at half past 11 we gave them a key and told them to put it in the letter box when they left. 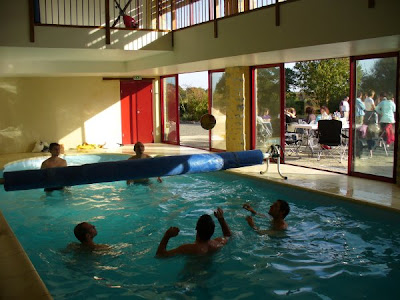 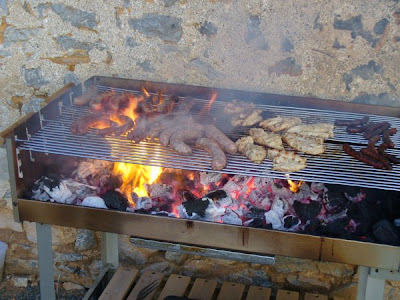 One of my garden projects is to sort out the flower/shrub bed next to the car park. This involves pick-axeing the weeds and stones out, covering the surface in pine bark to keep the weeds down, and planting some shrubs. Not neccesarily in that order. Happily, my mum and her partner both like gardening, so we have made some good progress this week, while they have been holidaying here. 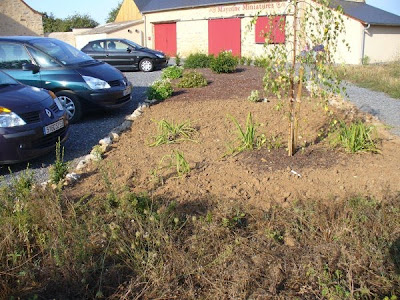 
So we go collect a trailer load of pine bark, and put it on the ground. Much better. 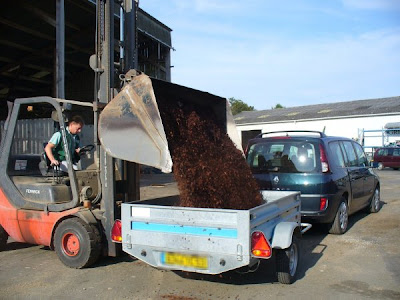 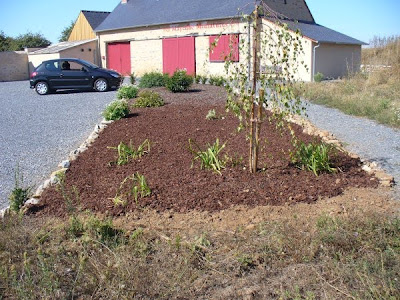 About half of the total area is done by now...only about three week's work left to do.
Posted by Mark In Mayenne at 12:31 4 comments:

There is a problem with water quality in this part of France. Because we are in an agricultural area, run-off of fertilisers and phytosanitary products from fields can pollute streams and rivers to levels exceeding EC norms.

So the Powers that Be have proposed a scheme to increase the rate of water flow in the local rivers, by removing all the dams that were put in place for the old mills. I've got to say I don't see myself how removing the dams flushes pollutants out of the way any faster. If the water level is constant, as much water flows into any section of river as flows out, whether there is a dam there or not.

This scheme has already been implemented in one local river, the Joanne, and people are not happy with the results. All the deep sections of river behind the dams have gone, leaving in place a shallow, narrow but fast-flowing stream. The fish population has reportedly plummeted, as has the population of wildlife they support. 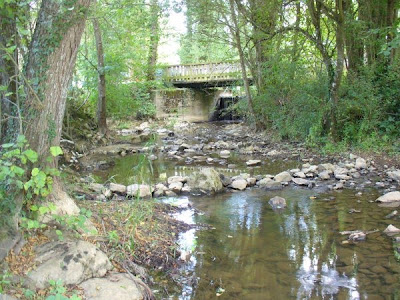 A shallow section of the Erve, just downstream of some sluice gates. 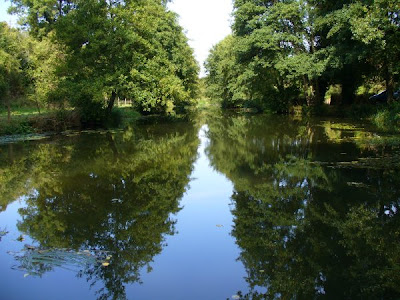 A deeper section of the Erve, just upstream of the sluice gates. 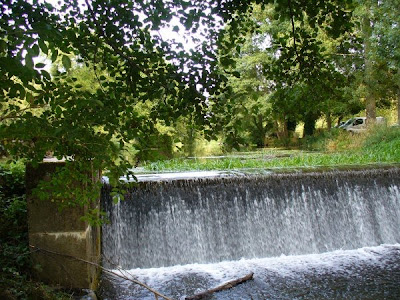 The dam that would be removed.

So I signed a petition recently against the proposal to destroy the dams, and instead, simply open the sluice gates for a couple of years to see what happens. This will have pretty much the same effect on the river and water flow, but is easily reversed. Seems sensible to me: if people don't like the result or if it doesn't work, you can change back. 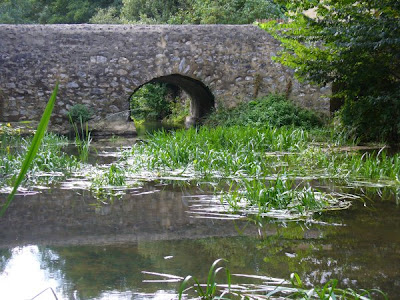 The bridge, cos it's pretty. 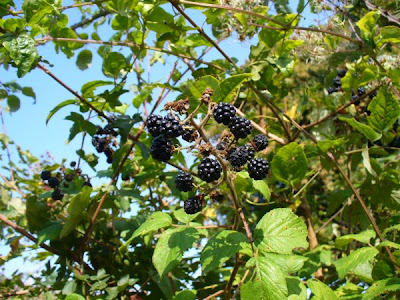 And some blackberries I picked on the way home from taking these photos. Yum!


And while we're on the subject, one of the people staying here during the flute course tells me he saw an otter and cubs down by the river, not far from where I took these pictures. I doubt if a reduced river would support much in the way of otter families.
Posted by Mark In Mayenne at 07:48 6 comments:

My mum and her partner are visiting for a short while so this afternoon we went to visit a little garden about an hour away, that we had not seen before. The Jardin de La Perrine has an intimate feel, quite English in style, and the atmosphere reminded me very much of the lovely Savill Garden near Egham (complete with running water at the valley bottom), that I used to visit a few times each year. 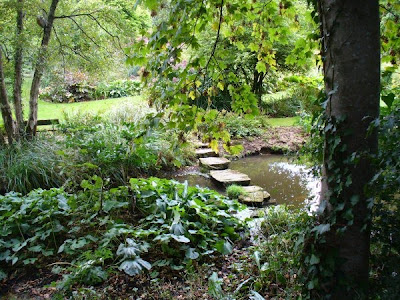 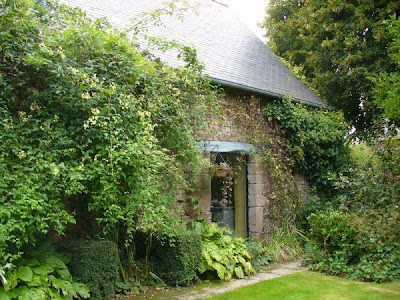 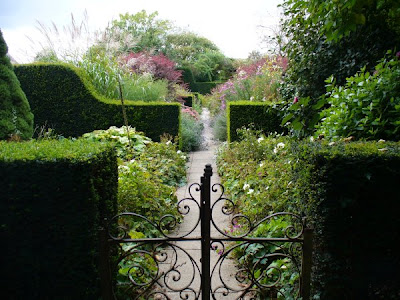 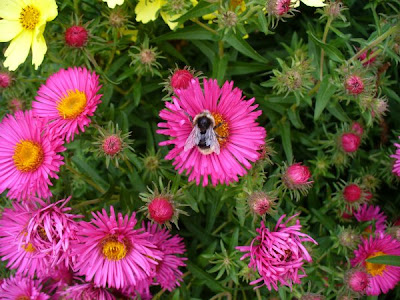 But the best live entertainment came from this chappie, who thought my shoelaces needed a bit of stretching: 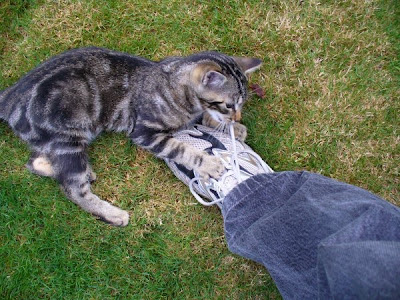