My potatoes have not done well this year, and I'm not sure why.  The leaves of all the plants slowly went yellow, curled up and died, but there were no signs of mildew or any other kind of infestation, rot or infection.  It looked like the plants couldn't draw up water fast enough to cope with the intense heat waves we had in recent weeks.

Louis up the road had a good crop (he was proud to show me) of the Désirée variety of pink-skinned spuds, and he never waters his.  Ho hum.  I got about one or two potatoes per plant, 7 kilos in total, probably worth about what I paid for the seed potatoes in Spring. 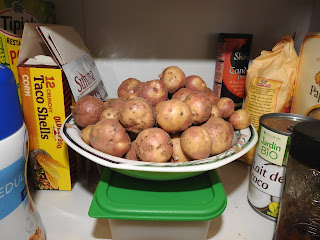 P.S.  I think my potatoes might have black dot.  Anita said last year that there were some black dots on the skin of the potatoes, and that you had to take off a thicker layer of peel to get rid of them.  This year there were many more.  I'm going to have to stop putting potato peelings on the compost heap, and plant first early spuds next year.  I will also be rotating the plantings to try to minimise this problem.
Posted by Mark In Mayenne at 02:56 3 comments:

The DIY plumbing project to fix the leaks in the heating pipes has achieved its primary objective:  the pipes no longer leak.   It took (much) longer than I thought it would, because every time I fixed one problem, a new one would appear.

The pipes carrying the hot water are of the type multicouche, or multi-layer in English.   I don't know if the particular pipes I used are manufactured by these guys, but you get the general idea.   The problem I experienced was that every time I turned off the central heating at the end of Winter, one or more of the joints would spring a leak.  This year's leak was behind the plasterboard in the kitchen so I had to cut out a hole and work in the ceiling space.

I have used compression fiittings in the past, and push-fit ones (described in French as "automatic"), and both kinds have leaked.  So I decided to go with the third type of fittings that are clamped on using big, powerful pincers.  These pincers need a lot of force, and I was seriously concerned about getting the leverage in the narrow ceiling space to close them, but I managed. 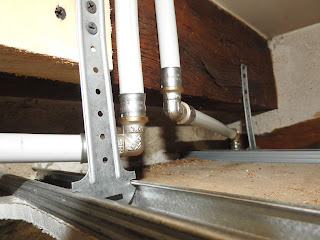 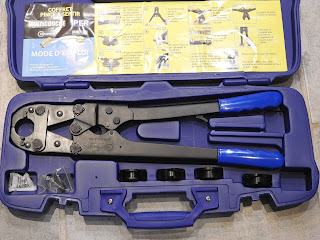 I had been avoiding using pincer fittings because the pincers are expensive, but both of the other types I have known to fail.  If this type fails again I'm taking the whole lot out and replacing it with polythene pipes.

Every time I replaced a joint, the one or ones next to it, farther along the pipe, would be disturbed and also start to leak.  So in the end, by stages, I replaced the lot.   I also took the opportunity to put some copper pipes in next to the radiators.  On the way, I  learned the technique of soldering brass fittings to copper, since the first ones I did also leaked.   (You have to heat the brass fitting, and let the heat travel to the copper.  Only then can you be sure that the whole joint is hot enough: if you heat the copper or the copper/brass border, the brass fitting might not be hot enough to melt the solder to the full depth of the join)

A night at the opera

For the last three years, at the Chateau Linières, about a 15 minute drive away, they have put on an opera.   There is an orchestra of professional musicians, the performers are professionals, and they all do it for free.  It costs €10 to get in, and you sit on the grass to watch.  You can pay extra to sit on benches or chairs, but they are at the back, so you get a better view (and sound; there is no amplification) from the cheap seats.  It really is excellent.

This year it was Il Trovatore, a particularly nasty tale that ends with a guy killing his long-lost brother in a misguided act of revenge.   The opera is staged in the open air, and gets postponed or cancelled if it rains.  This year, the Thursday performance was moved to Friday as the only rain to fall in a 3-week drought and heat wave, decided to arrive that night. 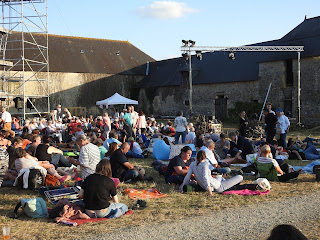 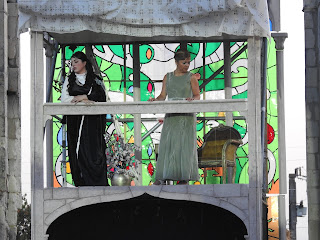 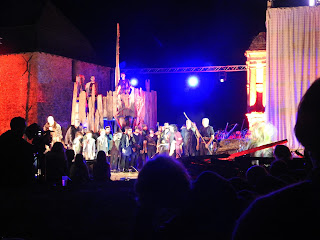 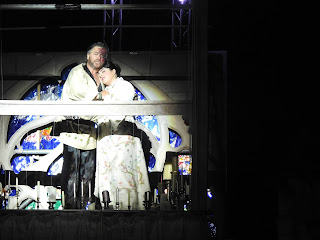 I have a few DIY projects to attack during this period when the gîte is not very busy.  One of them is to fix a leak in the central heating.

When installing the heating, I chose a form of tubing that the French call multicouche, to circulate the hot water to the radiators. The decision was made on the basis that multicouche was for sale in the DIY shop, and is supposed to work.  The connectors, although relatively expensive at about 4 or 5 euro each, can be bought in a push-fit version, which makes connecting up the pipes a piece of cake ("simple comme bonjour").  In the sure and certain hope that these push-fit connectors would be watertight I made some joints in the ceiling, that ended up behind some plasterboard.  This turned out to be a mistake, since in my case, one leaked.

This morning I cut out some plasterboard to take a look, and disconnected the leaking pipe.  I don't want to replace all the piping, so I will replace the joints with different connectors that are clamped in place with a big pair of pincers.  I am hoping that I have cut a big enough hole in the plasterboard to properly wield the pincers, that are quite big. 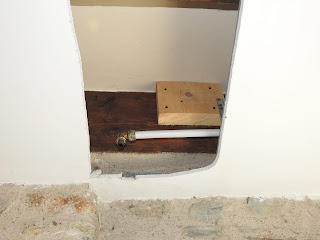 The mower, since you ask, is still not working.  I thought that I had a flat battery, but no amount of recharging or jump leads could get the starter motor to turn the engine over anything like fast enough.   The starter motor is knackered; the brushes are shot.  I was hoping to get a replacement set together with the mounting plate (shown here, price should be about €30), but they don't seem to supply them separately, despite what it says in the Kohler engine manual.   So it looks like I'm in for a new starter motor (about €120). 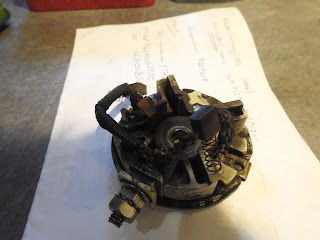 With the increasing tendency to suffer drought in Summer, I have installed a system of semi-automatic watering in the veg patch.  It comprises ordinary garden hose (the most expensive part of the project) to distribute the water, into which are screwed at intervals, little nozzles that spray the water out.  It seems to be very effective.

The initial design had hoses placed along the middle of the raised beds, with red nozzles that spray water through 360°.   This system has the disavantage that, with the hose loosely stapled in place, it's difficult to hoe underneath it, so I ended up with a line of weeds down the middle of the bed.  I am experimenting this year with (green) nozzles that spray out through 180°, and mounting the hose on the wooden sides of the beds. 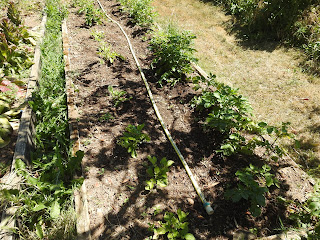 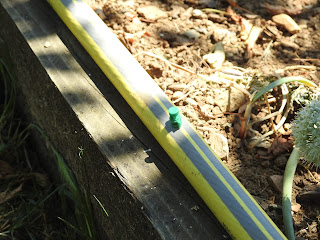 In other gripping news,  the tomatoes are growing strongly, they are now covered in flowers, but I might have planted them a bit too close together: it could be difficult to harvest the tomatoes that grow in the middle of this thicket.   The squash plants are also doing very well, with one immature fruit setting already.

I did shallots again this year and they're looking good, but my red onion sets I think I might have  planted too early because they are all running to seed.  I guess I'll harvest it and grow from seed next year.

I tried florence fennel for the first time, just a short row of it, and that is looking good.   And the Zinnas for no other reason than that I like the flowers. 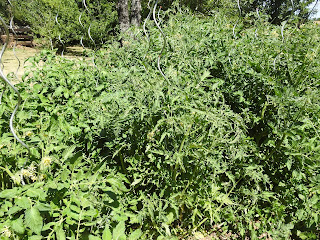 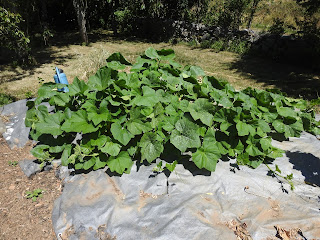 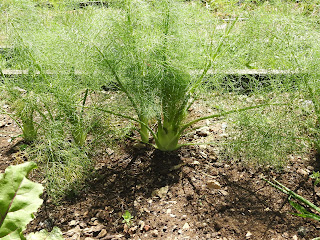 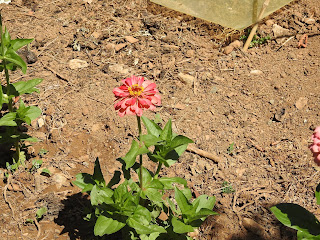 My ride-on mower has been playing up.  It's my fault.   An air filter broke, and let all sorts of dried grass bits into the air intake, along with the broken bit of rubber off the air filter.  The mower would run for anything from 30 seconds to an hour or so, then stop.

The symptoms were very like the engine running too rich:  the motor starts to sound rough, then starts emitting smoke, then coughs and dies.   The spark plugs were sooty.   So I took a good look at the air intake and carburettor, and fished out the piece of rubber I found inside it.  Put the whole lot back together again, and hey presto!  Nothing.  For good measure I replaced the fuel pump, but to no avail. 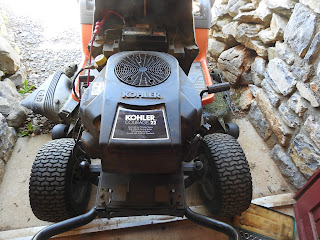 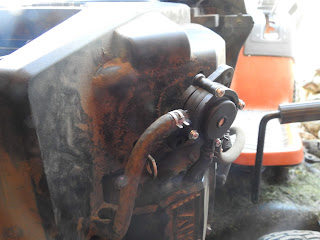 So I took it all apart again, took the carb off and cleaned it.  Some of the little channels were blocked with powdered grass, so I cleaned them as best I could, not having an air jet.    I couldn't get the float chamber screws off but I tested it by blowing in the fuel intake (yes, air goes in) and then turning it upside-down (yes, air stops going in)  Possibly not very healthy, but it worked, and it also confirmed that the main jet isn't blocked.  Put it all back together again.  Still no va. 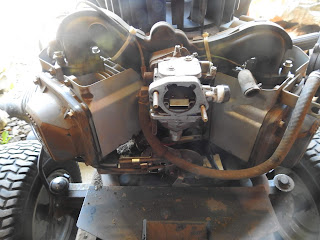 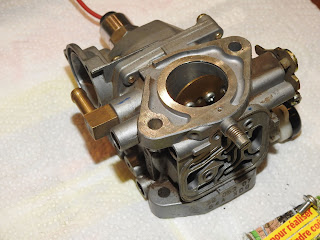 I was surprised to see the spark generating mechanism: a magnet mounted on the flywheel passes two coils (one per spark plug) so the timing is fixed, and the spark doesn't depend on the state of the battery.  There is a spark in both plugs, so that's not the problem.

Fuel is getting into the cylinders because I made sure the float chamber is full by putting a funnel on the fuel line, and also because I can smell it when the engine turns over.  I'm a bit stumped now, and the situation is not helped by a feeble battery that only just turns the engine over, and then only for a short time.  I've been jumping it from the car, but that doesn't work for long either.

Might have to call in a pro.  Rats.  Meanwhile I'm cutting the grass with the trusty walk-behind mower.  It takes a while, but at least it works.  Seems a bit heavy on the back, for some reason.