Guarantee A to Z (Except D)

I buy a fair amount of stuff on Amazon, and have done for a while.  If there's something I need and can afford, and I don't need to touch and see it before I buy, I often buy it there.   I don't tend to give it much thought - I've always had good experiences with Amazon and in the rare case of there being a problem, I have found their after-sales service to be excellent.

I recently gave a short concert, and recorded a video of it on my camera.  The only problem was, the memory chip was full after 30 minutes, so I lost a good 40% of the performance.  There was plenty of battery life left, so I thought I'd invest in chip upgrade.   I found some 1 terrabyte chips on Amazon and ordered one.

1 terrabyte - one million millon bytes, on a chip no bigger than a finger nail.  When I were a lad, a disk of just 300 million byte capacity was about 12 inches diameter and 8 inches high, heavy to lift up, and they fit inside a drive unit the size of a small fridge.  The guy who invented the tech that underpinned them worked for IBM, and he had to take his ideas to Japan, I think it was, before he found anyone prepared to try to make a product out of them.  It became, as we know, very successful and he was made an IBM Fellow for some years before he retired.  I cross paths with his daughter from time to time; she plays the flute and I have a CD by her.  But I digress.

So the chip arrives and doesn't work, and I'm going through the refund process.  The chip was sold through Amazon Marketplace, and to my surprise, I discover in the "small print" that the Amazon A-Z guarantee doesn't apply to "digital items", and specifically, not to wot I bought.  I'm not sure if that means digital items sold through Amazon Marketplace, or any digital item whatever the source.  I'm still going through the refund process so I don't know yet if I've been ripped off or not.

So, whatever, caveat emptor, as always.  *sigh*

We have a division of labour in the garden: I mow the lawns and do the heavy lifting and digging, Anita weeds the flower beds.   These days, Anita's shoulders don't support using a hoe, so the weeding takes a long time and it's a bit of a Forth road bridge job.  So we've decided to try smothering the weedlings with wood chips.

You can get the chips for €35 the metre cubed (it costs a bit more if you want it delivered), and a metre cubed covers ten square metres at 10cm thinkness.   Here's the chips on the bed beside the driveway, where the Daffs have almost finished flowering. 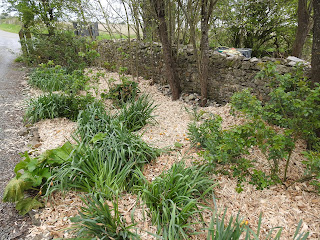 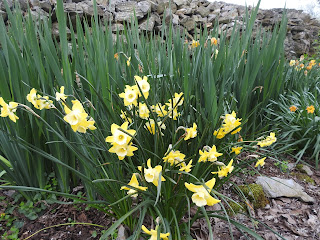 It's that time of year again

Yes, Springtime, when the tasks of the garden start to take precedence over other less urgent things.   I have planted up a bunch of tender veggies; three types of tomato, some chilli peppers and aubergines.  Here being inspected by the cat.

I planted out the spuds this morning, on the basis that we're about 2 weeks away from the last frosts so they should be OK.  And the shallots and onions that I planted out a couple of weeks ago are starting to show through. 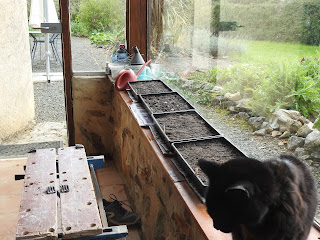 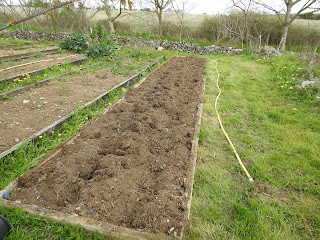 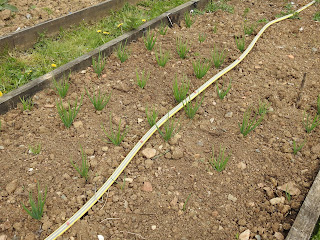 So I put in the new sink, tightened up all the joints on the trap, and eventually got the little leaks stopped.  PTFE tape is a wonderful thing.  Uh-oh, the sink backfills with water when it should be draining.

The old sink worked fine, so logic tells me that the thing that has changed, the new trap, must be causing the problem.  Extensive testing of the new trap - no problems there, despite the evidence.  I tired blowing down the drain pipe - blocked.   Sucking seemed to unblock it (a nausiating experince, to be tried only in dire emergencies).  But still blocked.  There seems to be a trap in the pipework in the wall.  Who ever puts a trap where you can't get at it?

I think that what happened is that the drainage pipe had been unused for several weeks and had dried out.  The crud that normally sticks to the sides dried and flaked off, sending flakes of dried crud to block the trap.  The problem was eventually fixed by sending down some viscious granulated drain cleaner that fizzes violently when wet.   Sudden glooping noise from somewhere in the wall, and the sink starts to work.

We now have a fully functioning bathroom - shower, bog and sink all work.  I have to fit the loft hatch (the tower has a conical roof that houses the TV aerial)  and a little tray for holding the shampoo and other gunk in the shower.  Then it's done.  This is the last post on the bathroom project.  *phew* 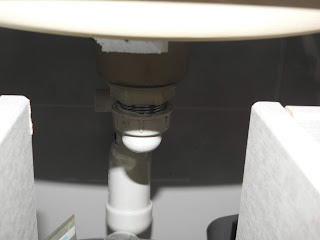 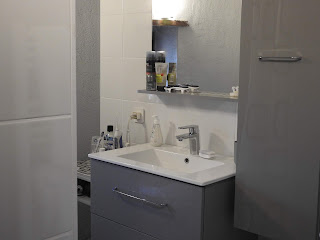 The floor is covered with grey finish plastic interlocking tiles that give an appearance somewhere between concrete and a metallic effect.  The tiles are easy to cut; you score along the cutting line then fold the tile and it snaps.  (It's hard to see pencil lines on grey tiles)

Most of the time spent putting the floor down was cutting the tiles - rectangular tiles in a circular room need a lot of cutting.  More tiles were cut than were laid whole.  I edged the tiles with grey mastic and the end result is effective, with the little mosaic tiles on the wall around the edges giving a pleasing effect. 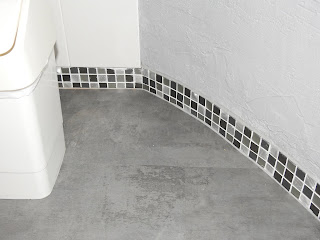