There was a funny item on the TF1 news the other night.   First, some background:

The French are very particular about their food, and also about it being the genuine article.   You can call pretty much any cheese cheddar in England, regardless of whether it comes from Cheddar or not, as long as it looks and tastes vaguely like cheddar.   They didn't protect their mark.

This is not so in France.  For example, they stomped down pretty hard a few years ago, against the then-growing tendency to call any fizzy white wine "champagne" even if it didn't come from Champagne.  (Everyone except the Russians knelt before this, but (again according to TF1) the russkies call their own fizz "champagne" and they also call the French champagne fizzy wine, just to rub salt into the wound)  Even the "Methode Champegnoise" description for fizz that indicated that it was made in the same way as champagne, was outlawed and had to be replaced with "Methode traditionelle".

The idea is that in France, people will easily be able to identify The Real Thing from imitations of lower quality.   They have various categories of protection, AOP is a common one, meaning "Appellation d'Origine Protegée, that is the food you are buying is The Real Thing, from The Actual Place and made to a Recipe that is clearly defined and is Not Allowed to Change.

Moving on, our unelected lords and masters in Brussels have decided that it's a good idea that good, nutritious food be distinguishable from inferior food by means of a "nutri-label", that classes the food from A to E, A being Very Good For You and E being rather less so.  Fine so far.

Roquefort is a cheese that I adore, it's an AOP cheese, made from raw sheeps' milk, made in a fixed way, and innoculated with penicillium, giving it a "blue" aspect.  It's flavourful, has lots of salt and is high fat, and accordingly has a nutri-score of E.   The makers of the cheese are somewhat miffed, since as they point out, they can't change the recipe and still call it Roquefort, but producers of inferior imitations can change the recipe of whatever they produce that mimicks Roquefort in taste, appearance and creaminess, and thereby get a better nutri-score. 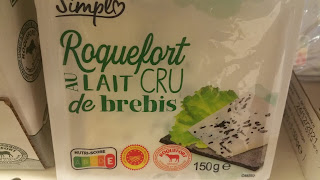 So, The Real Thing is bad for you, but the inferior imitations are good.   I nearly wet myself laughing.

Thinking farther ahead, what are the odds, do you reckon, that the insects they're trying to persuade us will be good to eat will be classed "A"?

Posted by Mark In Mayenne at 08:12 No comments:

A ring of curved tiles. 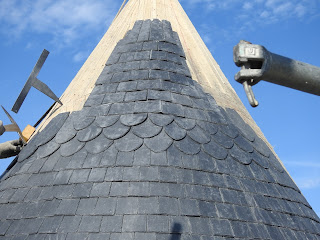 Slow, because each tile is individually trimmed to size and shape, then nailed on with two stainless steel nails.  What you see here is nigh on a day's work. 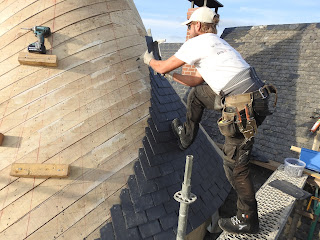 Getting the lines right

Our roofer is putting the tiles on from today.   One of the key aspects is getting the lines of tiles correct.   To this end he has made vertical lines converging at the top, and today is using a giant wooden compass, constructed on the spot, to make the horizontal ones. 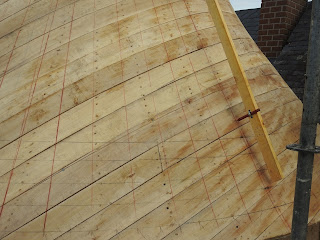 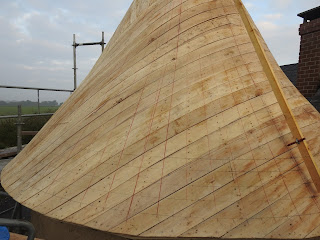 The wooden beam is pivoted at the top of the tower, and rotates around it.  The pencil is held in place by a bracket that is screwed on, and is moved up the wood in increments corresponding to the length of the tiles.
Posted by Mark In Mayenne at 00:05 No comments:

The commune of St Pierre sur Erve has a population of about 144 people, if no-one's away on holiday.   The cost of maintaining the local school falls to the residents, and money is not to be recklessly spent.   A call went out from the mayor a couple of weeks ago for volunteers to help paint the school's outdoor woodwork.   About 14 of us turned up.

Paint and brushes were supplied of course, and the reward was a free lunch afterwards.   A second coat of paint is planned for some time in the future, but meanwhile, I don't think it looks bad. 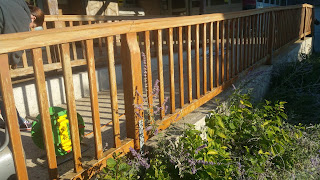 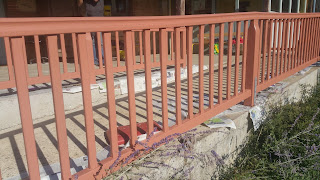 It was quite a social affair, and the widow of our old mayor came over with coffee and biscuits mid-morning, just for the participation; much appreciated by all.   It seems to me that if our society is going to focus more on local communities in order to function in future, St Pierre sur Erve has a head start.
Posted by Mark In Mayenne at 06:25 3 comments:

Didn't I say, just the other day, that a new and excellent coffee and bun shop had been set up in our local DIY shop?   I guess that was the kiss of death. 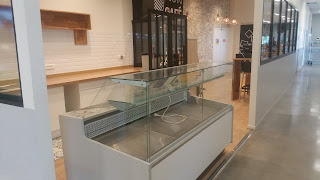 Posted by Mark In Mayenne at 08:39 No comments:

Wood on the roof

The tower is now getting its second layer of wood.  Rain poured down here over the weekend; 60mm along with strong winds on Saturday night.   Fortunately the tarpaulin held, and no significant amounts of rain came into the house. 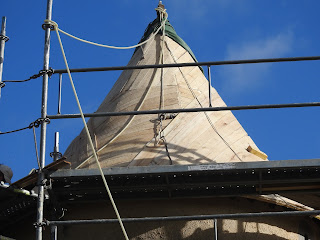 Other parts of France had even more rain, and flooded houses are again appearing on the news.

Posted by Mark In Mayenne at 02:54 No comments:

Leroy Merlin is a well-known chain of DIY shops; our nearest one is in Laval.    They used to have some fairly naff coffee available to customers, but they have recently installed what appears to be a Nespresso franchise coffee and bun shop.   We checked it out the other day, verdict: not bad at all.   We'll use it again, I'm sure. 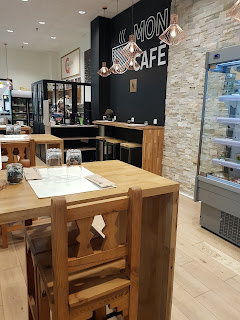 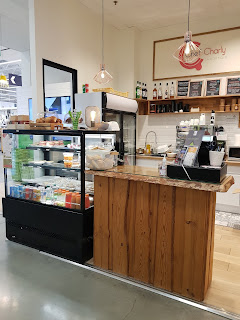 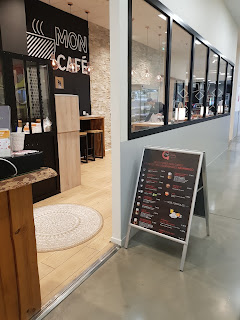