Caroline and me sight-reading a Quantz duet

The swimming pool shower always takes a while before the hot water comes; it's usually about 45 seconds before the water starts to run warm.  But a couple of months ago, I turned it on to rinse it off, and I noticed that the hot water arrived sooner than normal.  Odd, I thought, but perhaps someone had run some hot water nearby, and that had speeded things up.  Or something.

On a separate occasion, I was in the pool area, and heard a strange noise, like water hissing.  I eventually traced it to the shower mixer valve.  Gosh, I thought, with my ear to the valve, I can hear the pumps circulating the water around the system.

It wasn't until I felt the shower wall, and noticed that it was warm, hot even, that I came to the conclusion that perhaps my subconscious had been avoiding.  I have a leak of hot water in the shower.  Now the shower is built onto the wall, and the plumbing is behind the tiles, and mortared in.  Just where you don't want a leak.  Anyway I called the plumber in.

In principle, as long as the leak is in the shower joint itself, or thereabouts, there's not a big problem.  But if the leak is hidden in the bowels of the building, and the hot water is comimg at you via the plastic conduit through which the pipe is threaded, you have a big problem.  The worst case scenario is a need to re-plumb the shower with new pipes threaded through the building, plus perhaps the need to cut off all the hot water to half the client accommodation, while that's happening. 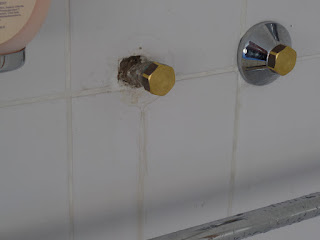 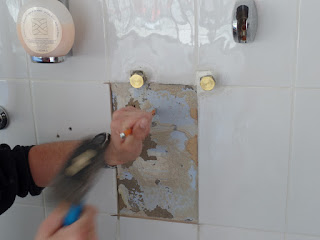 Of course the tiles need to be removed in order to get at the pipes, and they can't be removed without breaking them.   And of course we have no spares, and of course they're no longer manufactured.  So we spent a good half-day in Le Mans trying to find a good match.  It's amazing how many different shades of white there are, but eventually we found some that can be cut to size, and that match reasonably well.

The plumber dug into the wall and got to the hot pipe without damaging it, and fortunately the leak was in the joint to the shower fitting.  The culprit was a nut that had split, possibly under the pressure of having too much hemp fibre in the thread.  I remember that hemp fibre was what my grandfather used for sealing plumbing joints; well, they still use it in France.  It expands to seal the joint, and perhaps this hemp had expanded too much and split the nut. 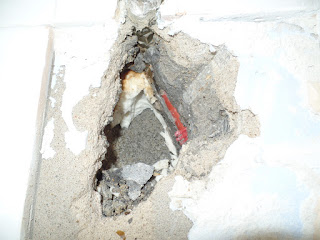 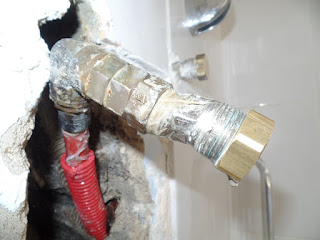 It's easy enough to see in the last picture; the nut nearest the shower connector has a dark line across its width.  It has one the other side too, and they're both cracks that spray water everywhere, when under pressure.

I glued the replacement tile in on Tuesday, yesterday I grouted it, and today I connected up the shower fitting.  Fingers crossed, but it seems OK.

May is hectic in the gîte.  There being four holiday weekends on the trot we have customers for four successive weekends, which does not leave much time for anything other than looking after customers and keeping the gîte in good condition.  We have a rule, arrived at through hard experience, that we never do more than four weekends in a row: we get too tired, and the customers start to notice.  The fourth one is next weekend.

Meanwhile the garden continues to grow with Spring energy.  The Iris are nearly all out.  Here's a couple of pictures.  The blue one is called Belle de Nuit, the pink one is Changing Winds. 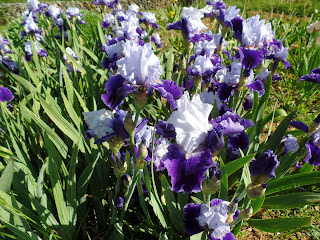 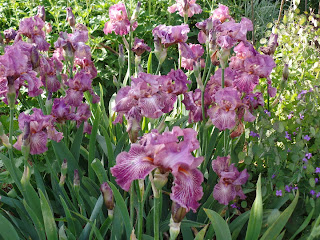 I abuse wheelbarrows. The terrain around my house is strewn with rocks of all shapes and sizes, and when I need to transfer them from place to place, I use a wheelbarrow. Since the rocks are heavy, this tends to overload the barrow.

My old barrow was starting to split at the sides, so I decided to try to repair it using my new-found welding skills.   I put a length of mild steel bracing in the turned-over edge of the barrow and welded it into place.  The result isn't pretty since the welding melted holes in the sheet metal of the barrow. On the other hand, the barrow is stronger than before, and doesn't show signs of further splitting when overloaded with rocks.  So far so good. 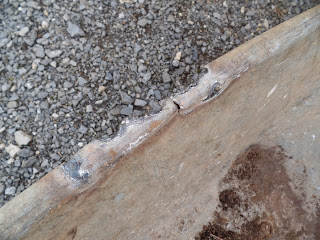 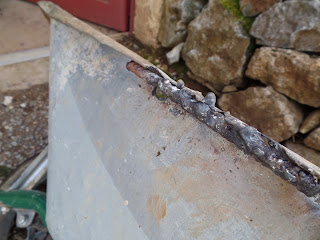 I have two types of trousers; black ones and blue ones.  It keeps life simple.  The blue ones are jeans and the black ones are mostly jeans; this keeps things simple too.  And like shoes, their status starts off as "best", moves on to "casual", then on to "gardening" and finally "DIY".  So I was wearing casual black jeans, that had become grubby, so before putting them in the wash I was doing a little bit of gardening in them; moving rocks with my newly-repaired barrow.  The problem is I tore a hole in the jeans on an unnoticed snag in the weld. 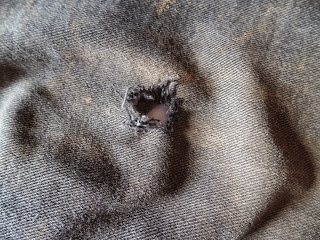 So the only observation left to make is that for the price of a new pair of jeans I could have bought a new wheelbarrow.    *sigh*   On the plus side, the early-season Iris are out.  Here's a couple of pics. 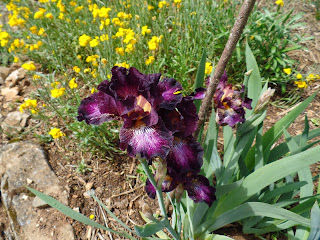 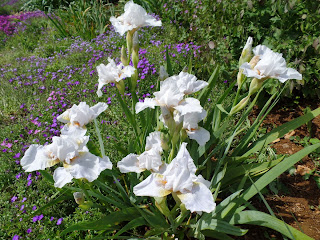 Spring has been a bit strange this year - everything seems to be flowering at the same time.  The Daffs and Tulips were out at the same time, and now although the Daffs have passed, the Tulips and Wallflowers are out together, and the Iris are starting to flower as well.

The guests in the gîte were not blessed with good weather this weekend.  They arrived early Friday afternoon and I think they got about 15 minutes rain-free before they left on Sunday afternoon.  They had to take their pic-nic indoors in the dining room instead of on some carpet somewhere in the countryside.  They say that next time they're going to make sure they come at a sunny time.

But the heuchera looked nice in the rain. 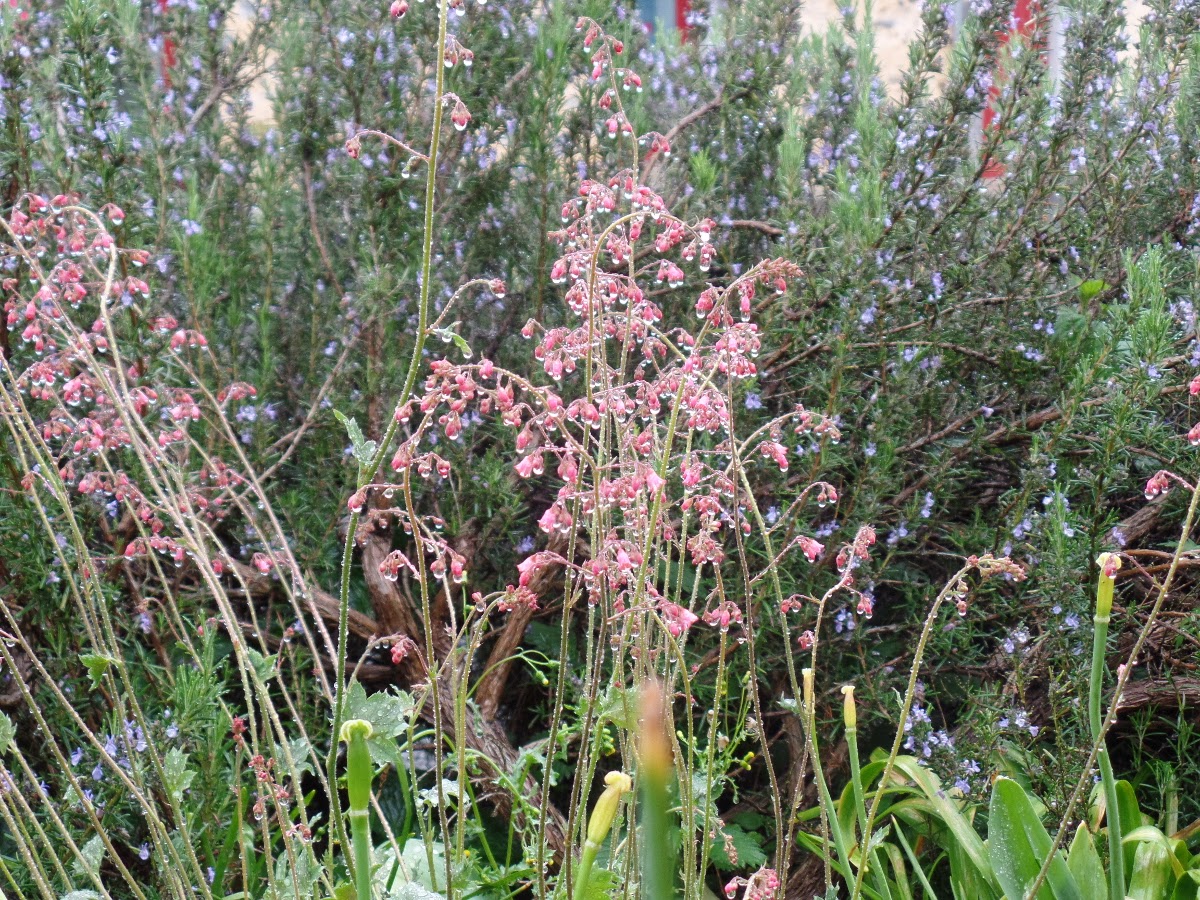 And meanwhile, regardless of the weather outside, the Amaryllis are flowering profusely. 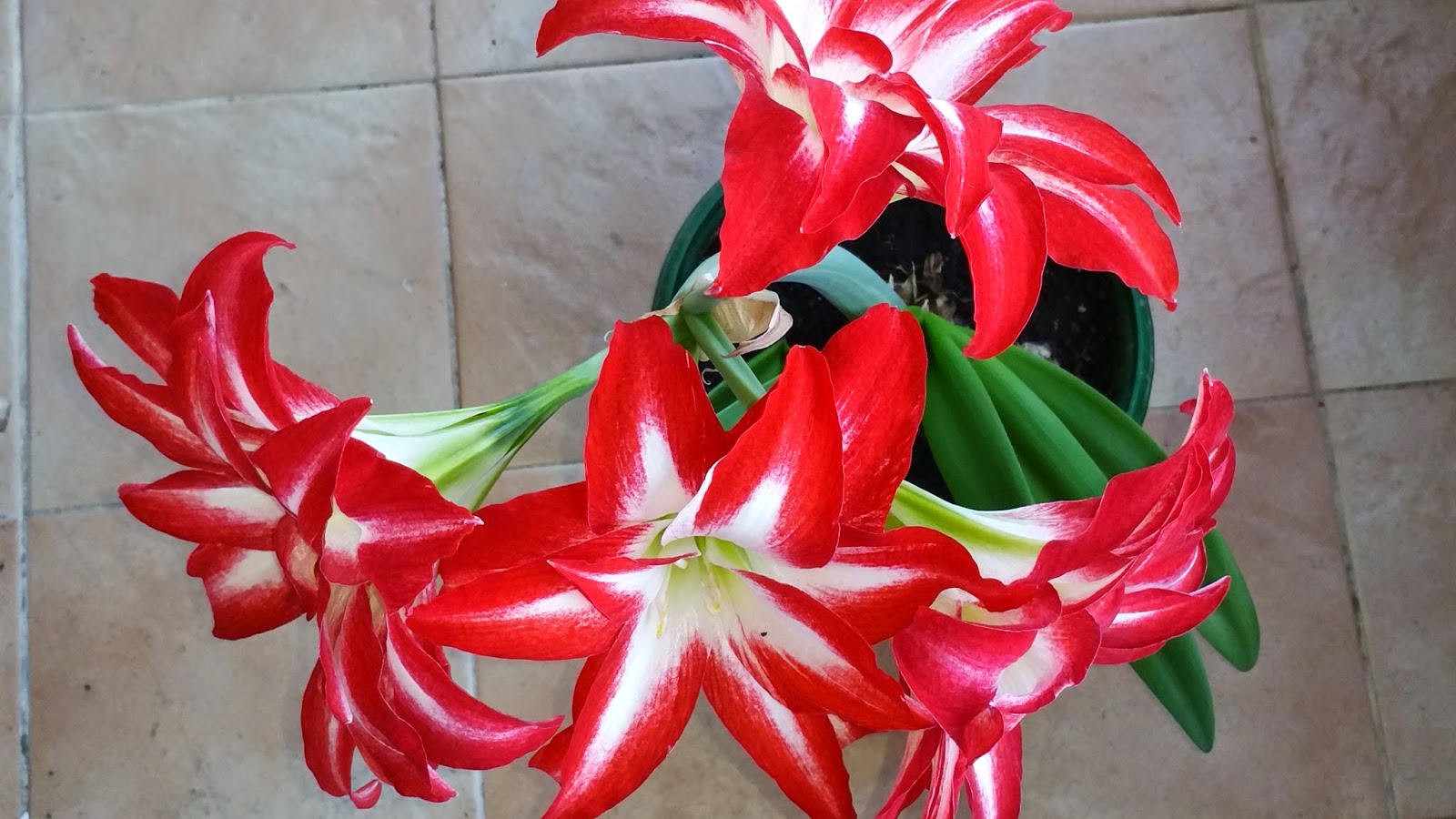 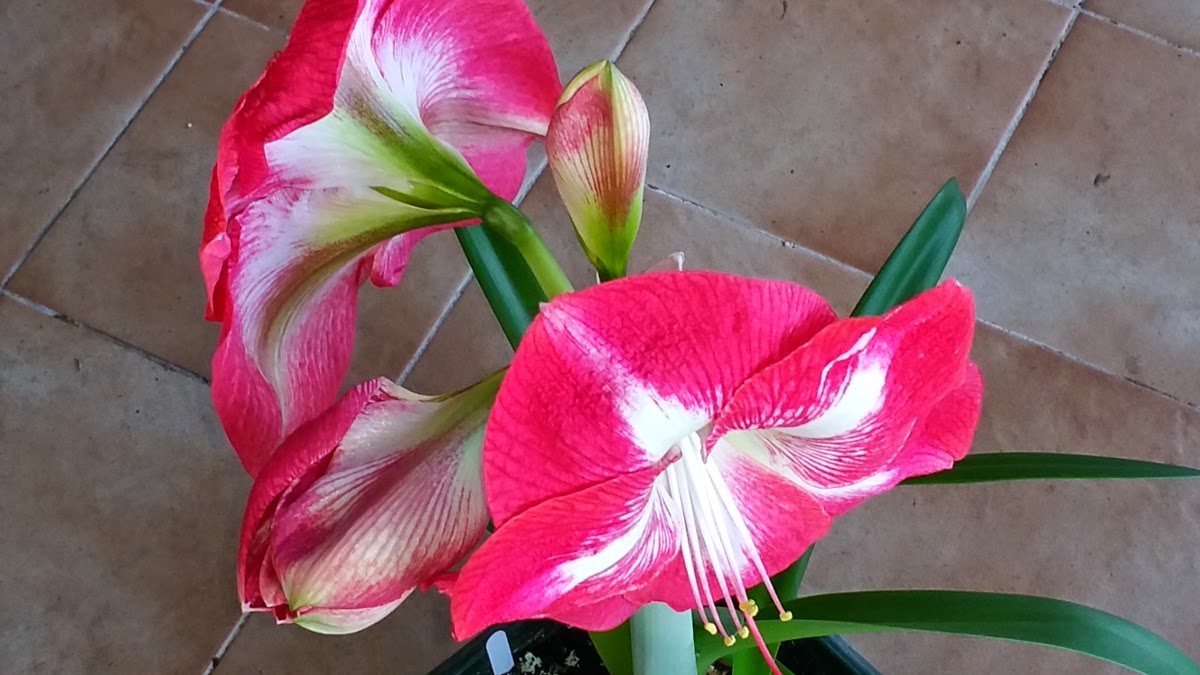