On the left, a big pile of rocks.  On the right, a dirt wall that needs a nice dry stone wall in front of it to stop it  from crumbling. 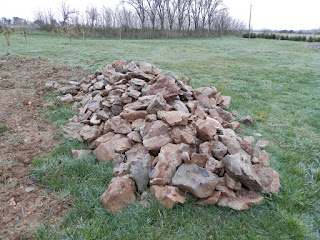 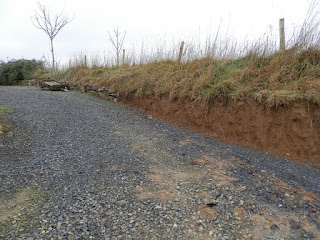 I have been busy during the last week or so, installing a couple of radiators in the house.   Although the heating in the living room is provided by the main boiler, the rest of the house is heated by electric radiators.   This is expensive, and wasteful of the investment in the boiler, so I set about installing a couple of radiators in the study and the main bedroom.   The project had three main components:  choosing and mounting the radiators, choosing and mounting a pump and finally, connecting them all together.

The brand of pumps favoured in our area seems to be Salmson, a French brand.  I think they've got a factory in Laval.  But I can get a Wilo pump (German) in England, for about 1/6th the price.  (Maybe that's just because I don't yet know where the wholesale plumbers' merchants are to be found around here.)   So when I was in England just before Christmas, I popped into what used to be my local plumbers' merchants, Peter Doble in Ashford near Staines, and bought a suitable pump for 60 quid.

The Bricoman in Laval is having a sale at the moment, so I went to them for the radiators and for most of the rest of the bits.   The main decisions were around the type of pipework (copper or plastic) and the nature of the fixings (compression, push-fit or crimped).   In the end I chose plastic pipes since they are new and supposedly an improvement over copper (and much cheaper), and I chose push-fit fixings since they are easy to fit.   In fact I had to use some compression fixings as well, since I seem to have exhausted the stock of push-fit ones throughout the Mayenne.

Here are some impressions.   The plastic pipe is easy to work with.  It's flexible and tough, and easy to cut using the special tool.  It looks like it will last.   Described as "multicouche" (multi-layered), to the eye it looks like it's basically an aluminium tube coated inside and out with a tough plastic.  I think that there is also a layer of something like fibreglass on each side of the aluminium, for extra resilience.

However, for exposed pipework, I think that copper pipes with soldered connections would give better-looking results:  the compression and push-fit joints for plastic (and copper) are fatter than the pipe and look, to my eye, like knots in string.  If I were going to stick with plastic pipe, I'd invest in a crimping tool and use the thinner crimped joints.

The Wilo pump has the same diameter attachment as Salmson, which is good to know, since it means that in principle they are easily interchangeable.  It's described as especially efficient, in that it adjusts its power output according to how much hot water is needed by the system.  Seems to work fine.

The push-fit fixings behaved impeccably; not a leak to be found.   It was pretty much inevitable that I didn't do up some of the compression fixings tight enough, so there were a few weepy joints, but that's an easy problem to fix.

I'm not convinced by the thermostatic controllers that I chose.  They are designed for one-way flow of water, and the manufacturers assume that the water pipes are coming straight out of a (plasterboard) wall to the radiator.  Hence the numbers on the controller in the picture being upside-down.  A bi-directional one would allow me to mount it with the controller sticking out to the side, which would also give better control of room temperature.   I will replace them at some point in the future.

But in the mean time, I intend to enjoy a cosy house. 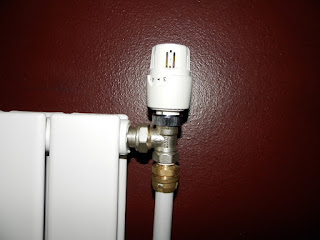 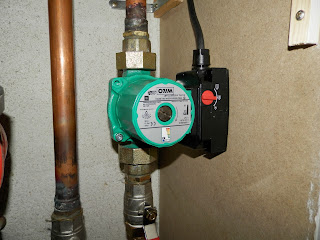 Posted by Mark In Mayenne at 07:12 4 comments: Links to this post

The recent unpleasant combination of snow and ice was forecast to be on the way out.  Yesterday the temperatures stayed above freezing, and the forecast for today was similar, with perhaps a few showers and maybe a bit of snow.  Looking out his morning, the remaining snow was patchy, with every likelihood that the roads would be passable and relatively safe.

Then, a snowfall lasting just an hour or so, changed the scene completely.  So perhaps no French class today, no shopping trip, and my glasses will have to stay where I left them at a friends' house, for a bit longer.

It looks pretty enough, but snow is also ordinary weather, normally expected at some point during Winter.  So why does it mess things up so much? 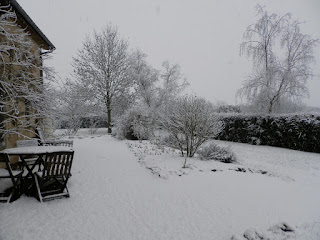 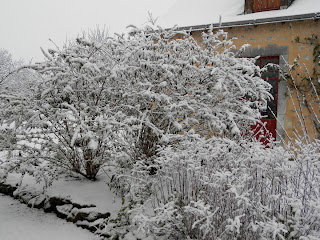 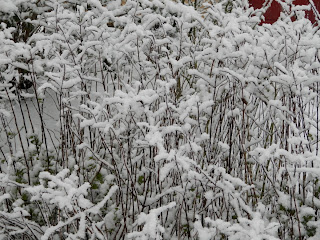 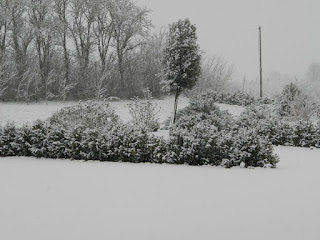 One of our local squirrels seems to be confused by the weather too.  It was out foraging this morning.  In this weather?  So I put out some nuts, maybe it will find them.

Posted by Mark In Mayenne at 01:05 2 comments: Links to this post

For all those avid followers, here is the promised picture of the wonderful corrugated iron gates, displaying themselves proudly right in the centre of the village, about 20 yards, I guess, from the church door.   Classy, what? 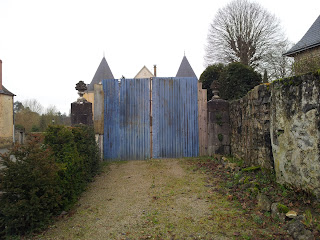 Posted by Mark In Mayenne at 06:57 3 comments: Links to this post

The cultural differences between the French and British attitudes to government are too great to go into here, even if I thought I understood them all.  But the French do local government in a big way.   Every little village has its mayor, and St Pierre sur Erve (population about 150 depending on who's on holiday) is no exception.

It is the practise at this time of year for the mayor to hold what is effectively an AGM, where the village is invited to hear about what has been achieved during the last year, and what is planned for the next.  He or she traditionally offers his best wishes for the coming year, and the event is known casually as the voeux.   Ours was yesterday.  Most village families were there, though not all, as were mayors from the surrounding villages and representatives of other political bodies such as the Communauté de commune (CC) and the Conseil générale.

France is in the process of trying to reduce the overheads of its local government, and part of this is that small CCs representing fewer than 5,000 people have to merge or be merged, into larger ones.  Ours merged pre-emptively, and now embodies four former, smaller ones.  No-one seemed to comment much on this or question it.  The politicians did say that local taxes wouldn't go up, despite central government trying to offload its responsibilities onto local ones.  Time for a pinch of salt.

St Pierre sur Erve is now a Petite Cité de Caractère, something the mayor has been working at for years.  The idea is that villages are so designated because they have some special combination of architectural heritage, countryside, or other things of interest for tourists to come and see.  For those villages that, unlike our own St Pierre, have local businesses, this is good for trade.  The good thing from the villagers' point of view is that grants are available to help towards the cost of  improving your property; the bad thing is that you are more likely to be encouraged to do it.

After the strategic, it all got delightfully local.  There is a wonderfully ugly set of corrugated iron gates right at the village centre.  This "Portail de Caractère" (sorry, the photo didn't come out; I'll try again when the sun is not behind it) was discussed, along with various creative ways of getting rid of it, involving errant tractors stuck in reverse, and so on.   The ex-deputy mayor was thanked for his efforts in killing over 100 coypus that had been eating the crops.  The village baker was thanked for his contribution to the running of the village, and presented with a nice metal sign for his bakery.  After that, fizzy wine, the traditional galette des roi.   And a chin-wag. 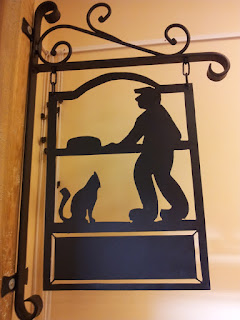 Posted by Mark In Mayenne at 05:56 4 comments: Links to this post

This pic was taken on maximum zoom (21x) and through a window.  A bit shaky, but the best one yet. 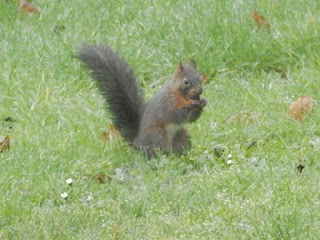 Posted by Mark In Mayenne at 06:47 3 comments: Links to this post

We've had a good share of rain this Winter.  Not that I'm unhappy about this: the water table has been low of recent years and the farmers have been complaining.    Now everyone is relieved that things are back to normal.   Well, almost everyone.   I did hear of one farmer complaining that he couldn't harvest his potatoes.   But then where would the world be without a moaning farmer?

And compared to other people's, our rain has been moderate.  They were telling us last night on the telly that the record for a tropical storm is a bit more than 3.6 metres of rainfall in 3 days.  I do find that hard to imagine.   We were on holiday on the isle of Réunion last year, and they have just been hit by a big storm.  Places we went to have been featured on the news, but fortunately, only to report material damage, no casualties.

Although we've only had a few showers during the last few days, parts of my usual walking circuit around the village are still underwater, so my walk the other day took a different route.   You could still see other effects of the rain though:  the stepping stones are not useable, and the centre of the footpath is transformed into a little rivulet.  Grass growing beside the path has been flattened by the flowing water and looks like it has been combed.  Even the roman bridge, deserted by the river's meanderings, has water under it again. 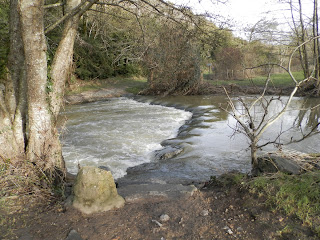 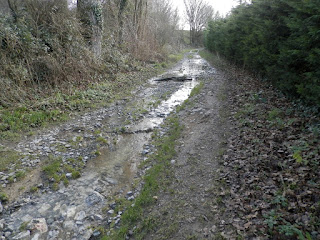 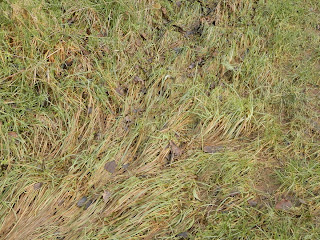 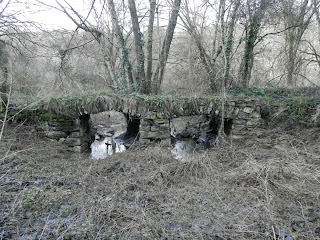 Posted by Mark In Mayenne at 13:18 2 comments: Links to this post