Well yes, it was the fête de la musique last weekend.  I hadn't realised that this was once an informal celebration of music among the paysans that has been, effectively, taken over by the state.   This has pros and cons.  Whereas you used to just turn up and play somewhere, now it's all organised, and of course, the schools, at all levels, take part.  Plus there are some professionals invited too.   Bit still it's a good musical evening out, and one meets one's fellow musicians in wandering along the streets

However, one takes as one finds, and our little flute quartet played a few numbers during the evening. 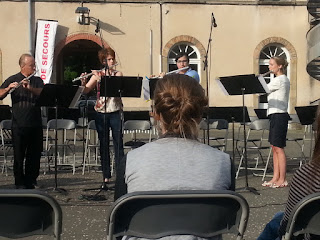 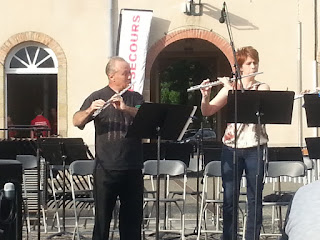 Later on, we wandered by a Led Zep tribute band.  I think they called themselves Sabre Tooth, but I can't find, on the web, a reference to that name linked to Zep.  But they were rather good.  We stayed and listened for a while.  The singer really has an excellent take on the Robert Plant voice (and hair).  And as he said at the start of the gig... "I hope you like Led Zeppelin" 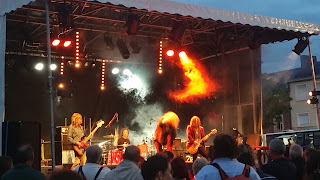 
A good friend of mine
Follows the stars;
Venus and Mars
Are all right tonight
(Paul McCartney)

The sunsets have been spectacular recently, and have been enhanced by the presence of planets visible near the moon.   I've looked it up on the web, and my best guess is that this picture shows the moon with Venus, with Jupiter rather than Mars diagonally up to its left.  (Click on the picture for a better view) 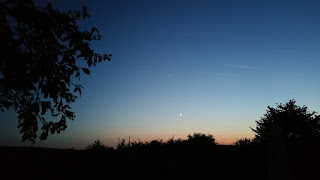 Posted by Mark In Mayenne at 00:33 No comments:

The french word misère doesn't mean misery like you might imagine - it means penury, extreme poverty or destitution.   Les Miserables is about poor people.

This little plant is commonly called la misère in France.  I'm not sure why.  I was given a few strands of this one last year by a friend, and it has done well in very poor soil.  Perhaps it's called misère because it thrives on next to nothing. 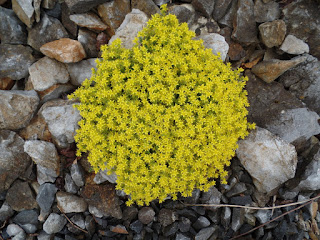 We don't need no hedge-ucation

The previous owners of our house had the foresight to buy a little triangle of land from the farmer next door.  This extends the back garden considerably, but also means that the old wall and hedge serve no useful purpose - instead, they just block the view.

I had already made a small gap in order to be able to access a winter wood pile behind the hedge. Now, it's time to get rid of the hedge and the drystone wall completely.  It will be a long job. 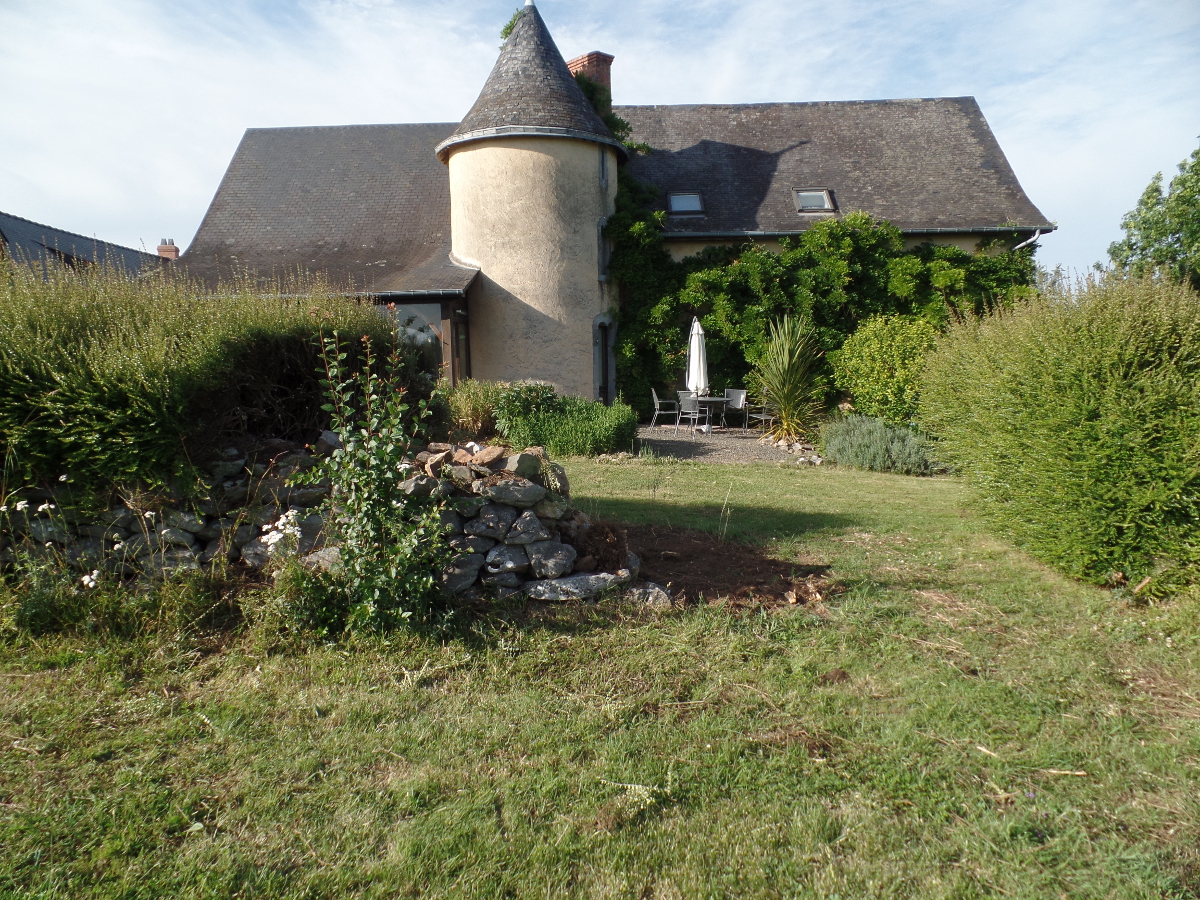 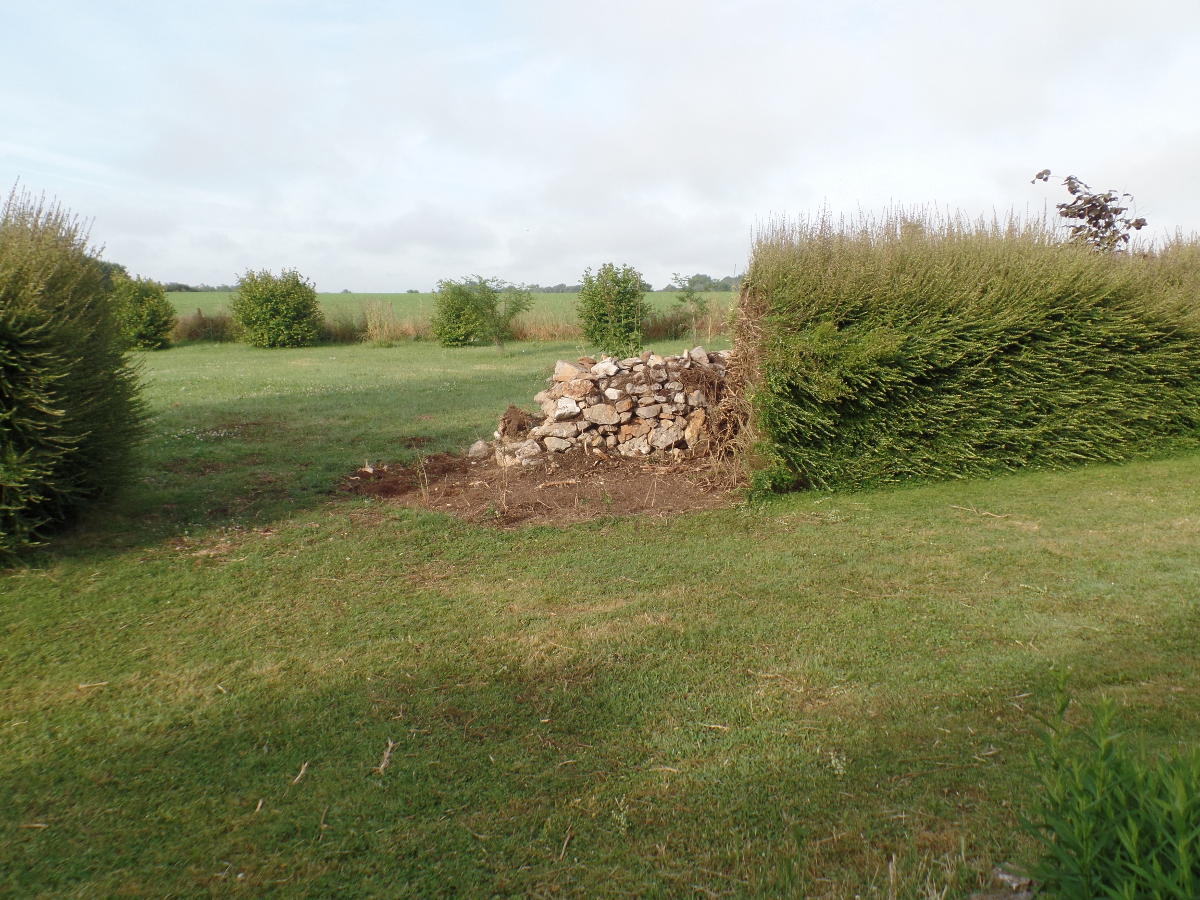 Posted by Mark In Mayenne at 01:49 No comments: 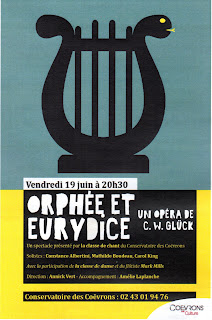 We were having a barbecue out the back last night, when a hare ran past, over the field next door. 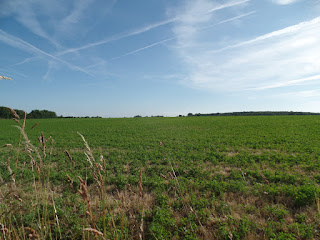 There is much scientific debate about what constitutes life, and when it is that something can be classed as alive rather than as just a bunch of chemicals that might replicate given the right circumstances.   But it's not so difficult as all that.  If you want to see and touch something that sits on the border between the living and the inert, just order cheap plants from a mail order catalogue, and wait to see what comes in the post.

These day lillies arrived by post three years ago and this is the first time that they are showing signs of being flowering plants.  Day lillies really need to be massed in big clumps, since, the flowers being open for only a day, you need a lot of them to give a continuous display.  These are not clumps yet, but I live in patient hope.  Meanwhile, the flowers give promise of a pretty display in the fulness of time. 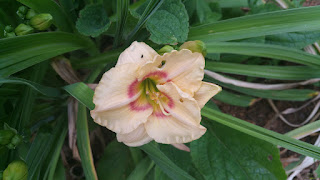 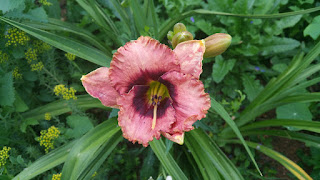 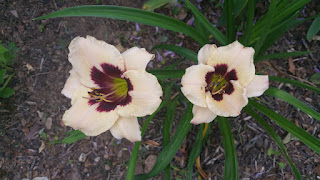 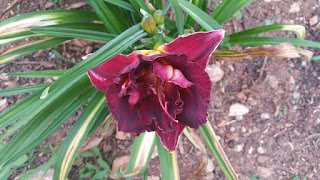 I guess that, in times of economic crisis, it's good to have an accountant who can advise on how best to avoid ruin.  In any case, our accountants seem to be doing well enough.   Their rhododendrons look well too, though that might just be coincidence. 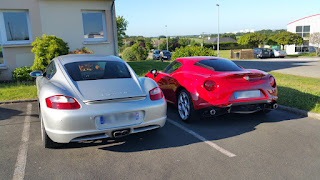 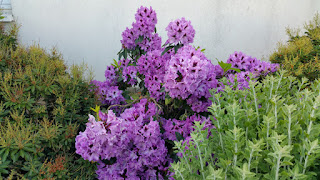 As an aside, we had a meeting a few days after these pictures were taken.  The red car was no longer there since the owner had decided to come to work on his mounatin bike that day.
Posted by Mark In Mayenne at 04:10 1 comment:

I bought two packets of Delphinium seeds a while back; dwarf ones and tall ones.  I never got many plants out of them but I did get a few.   They flowered and I kept the seeds, planting them the following year, and after a couple of years of this I have a reasonable display.  I have tried to keep the dwarf ones at the front and the tall ones at the back, but I'm not sure that there's much difference between them any more. 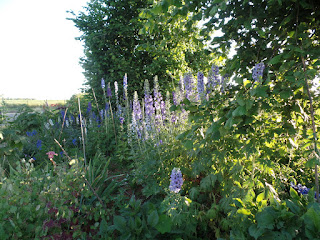 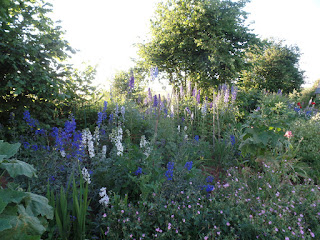 Slugs and snails love Delphiniums.  If you are not careful, they will eat the emerging shoots in Springtime before you ever see them, so you have to put down slug pellets before you would think you have to.
Posted by Mark In Mayenne at 02:12 2 comments:

I've had the climbing rose Masquerade against a wall of both my current and previous house, so all-in-all that's about 25 years.  I like the way it changes colour, from a clear yellow with a flash of pink in the bud, to a dark red during the last throes of flowering. 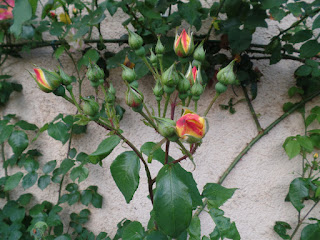 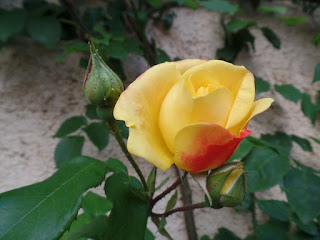 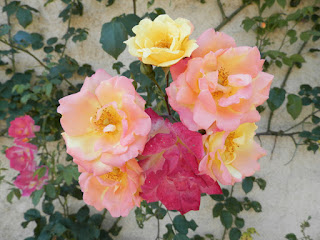 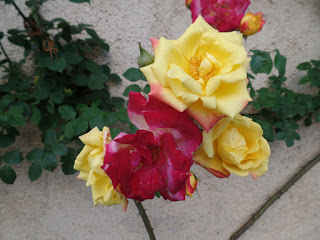 It can look from a distance as if there are three different-coloured roses climbing up the wall - very effective, I like it a lot.

We have a bunch of motorcyclists coming to stay with us this evening, and since you can't carry much on a motor bike, they asked us to lay on some extra things for them so they didn't have to transport them.  The list included some draft beer.

So we're down the local catering supplier, and they sell the beer casks and also the dispensers, but at a bit over 200 euros a pop, we figure that buying a dispenser just for a one-off weekend is a bit much, so I speak to the store manager and ask her if we can rent one. 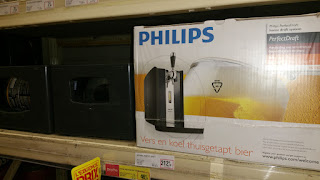 - Can we rent one of the beer machines?
- You buying the beer from me?
- Yes of course
- How long do you want it for?
- Just the weekend
- OK, you can have it for free.
- Great!
- In fact you'd better take two, in case one fails
- Do they often fail?
- No, but it's important that they don't
- OK
- You'll have to sign some forms and leave a deposit cheque
- No problem.

So we collect the two machines and the guy explains how to set one up.  No forms are presented for signing though, and no deposit cheque is requested.  And we end up at the cash desk, and explain we're borrowing the dispensers.  A quick internal phone call and we're allowed to walk out with two beer dispensers, no contract, no deposit cheque.

OK: It's not like they don't know us, and of course they'll get the machines back, but it struck me as being very, well, French.