We recently got the new cellphone antenna installed in the village, only a few years late.   At first, it wasn't working properly for Orange users (me), but that has been sorted.   So I now get text messages within half a minute of them being sent, which helps with the 2-step authorisation process for paying for internet purchases with my credit card.   And I can receive voice calls too.  But we're right on the edge of the coverage and depending on how many walls are between me and the antenna, calls are of variable quality.

But on my recent walk, I see the following notice, just down the road, of the installation of a mobile phone antenna.  It turns out that this will be installed in the valley, 7m high on the wall of the museum there that faces our place.  50 yards away and in line of sight.  Can't wait. 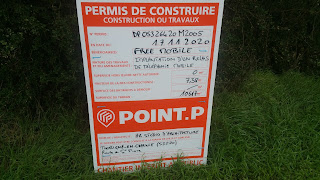 I have an exercise bike in front of the TV so I can be doing something useful while the news is on.   Walking and biking in the countryside are by far my favourite forms of exercise, but not if the weather is miserable.   So if I haven't been able to get out, I will often ride the exercise bike in the evening.

This is all very well for burning the calories and keeping the legs in trim, but doesn't do much for the upper body.   I do have some weights in the little gym in the gîte but weights aren't really compatible with normal living space, or watching TV.  So I was intrigued by a kickstarter program for a compact exercise device that uses rubber the resistance.   Here is a pic. 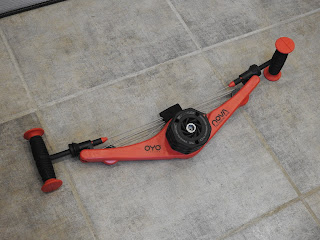 The resistance is provided by the black disks with short lengths of rubber in the middle, attached to the metal ring.   You can attach or detach the disks to change the force needed to bring the two arms together.  The handles on the ends of the arms can also be pulled outwards against the resistance.

I had not participated in a crowdfunding project before, but it seemed to work fine; I paid the money and waited, while various updates on the manufacturing and design process were posted, and in due course the thing arrived.  It does what was claimed for it, it sits discreetly on the floor beside the sofa, and I use it when I feel like it.

Been a bit quiet around here on the old blogging front.  Not much to report in fact, aside from the general depression associated with the curfew, and the equally general increasing anger about it.   However I do get to walk about the countryside (if it's not raining, and as long as I'm back before bedtime) so here's a few random snaps from recent walks.

We have been spared the snow here, but only just;  it was falling not far away.   In fact it has been a bumper snowfall for the ski resorts down South.  They have been allowed to open, but the mechanical lifts have been forbidden to operate.   The ski stations are not happy.  One wag suggested that the swimming pools be re-opened, but not filled with water.

This is frost, on a walk one cold morning, and was the whitest we have had so far.   Later on I happened past the garage where M Mottais told me he started out on his engineering career - here it is. 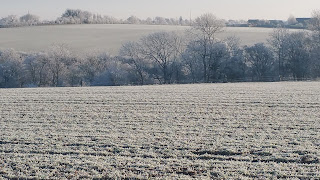 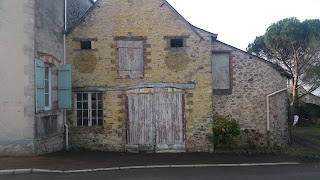 Property in the countryside around here is often old, and has been maintained more or less well for many decades.   As a consequence, the state of things is quite varied.  Sometimes one comes across some fine repair and maintenance work, as with this wall with its little wooden gate in solid oak.   The wall looks like it will be pointed in a sand/lime mix soon.
And who paints a target on a sawn-off log end, in the middle of nowhere, beside the river? 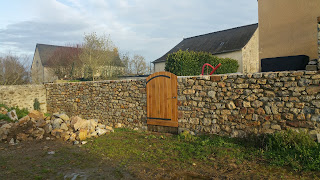 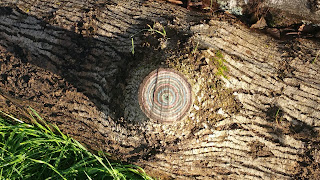