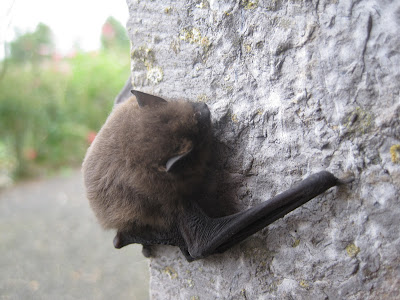 I seem to be inundated with small creatures at the moment. This bat stuck itself to the wall last night. I'd better leave it alone; highly visible external walls are not good hiding places for healthy bats, and they can carry rabies. I'll see if it's still there tomorrow, and deal with it then if I have to.
Posted by Mark In Mayenne at 05:38 1 comment: Links to this post 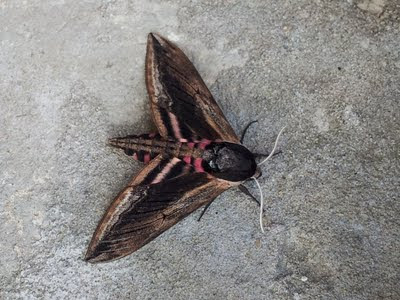 This one about as long as two index finger joints.
Posted by Mark In Mayenne at 01:04 4 comments: Links to this post

It is time to make vin aux noix about now, and the recent winds and rain have knocked a few immature walnuts off the trees. So when we saw these two guys strolling up the road, poking the undergrowth with a stick and collecting something, we thought it would be unripe walnuts they were after. Not a bit of it. Snails. These ones are the escargos de bourgogne, apparently, big and tasty, and they have been brought out by the rain. Yummy. 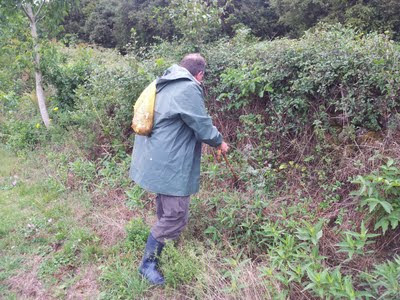 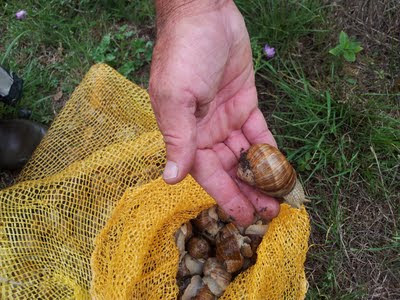 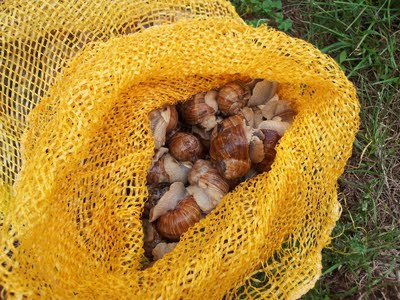 Didn't Rod Stewart record a song called "We are Snailing"?
Posted by Mark In Mayenne at 04:02 No comments: Links to this post

When Sony invented the Walkman, it was the first of its kind, and there was much internal debate at the company as to whether it would sell or not. Of course it turned out to be a roaring success, and could have helped Sony to captilaise on their lead in the MP3 player market too, had they had the courage to create a product that might compete with their CD sales.

So here's another marketing question. You're in an area that needs to attract tourists, and you've got a disused single-track railway line going through your village. What do you do with it? Turn it into a cycle track or walking route? No, you you build little pedal-powered carts for tourists to pedal along a few kilometres of its length, and charge them for it. Strangely enough, it's a success, and it's fun to do, being different enough from run-of-the-mill holiday activities to attract the curious.

We went to enjoy it a second time recently, with friends from England. 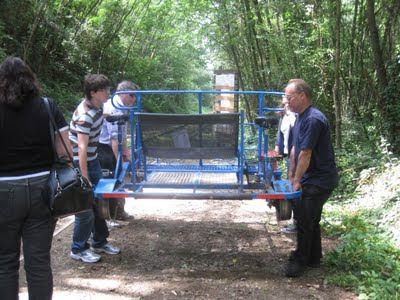 Posted by Mark In Mayenne at 06:08 2 comments: Links to this post

The re-taking of St Suzanne

The nearby medieval town of St Suzanne was held by the English from 1425 - 1439. There is a passing historical reference to the effect that the castle was re-taken by the French with the help of an English traitor who had fallen for a French girl. From these slim threads a local medievalist created a play that was performed in the Castle grounds a few evenings ago. Good fun, and an excuse to dress up. The Harmonie was going to play some incidental music, but didn't in the end. That didn't stop the Ouest France newspaper from reporting that they did play though. A long story... 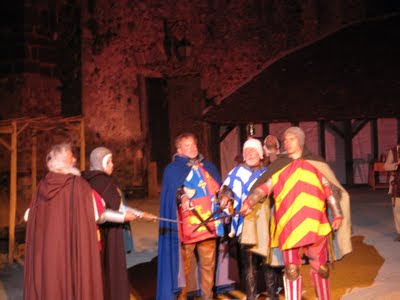 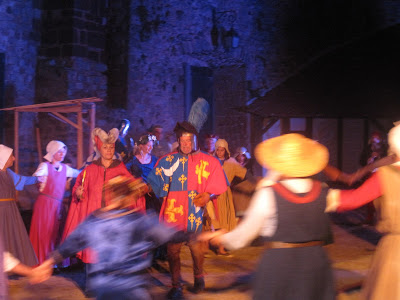 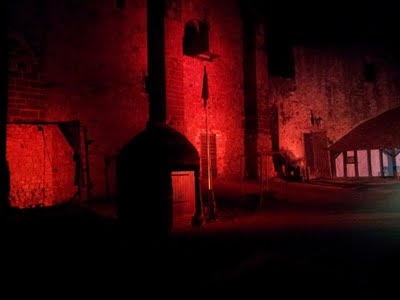 Posted by Mark In Mayenne at 02:18 No comments: Links to this post

The word "trolling" seems to have taken on the meaning "to post abusive comments on a blog or public website" but for me its meaning is "to wander aimlessly". The purpose of our trip to Paris was to attend a Paul Simon concert on the Wednesday evening, but it presented the opportunity to wander around Paris during the days before and after.

The concert was excellent. Although the focus was the presentation of the new album "So Beautiful or So What", Paul Simon gave us a lot of old favourites too, going back as far as The Sound of Silence which he presented as a solo item with acoustic guitar. I can't decide if that song is even more relevant today with the likes of Facebook and blogs, or if these technologies undermine its message. I guess time will tell.

Meanwhile, a street market in Paris is clearly not complete without a bike-propelled mobile coffee stall. The water is heated by a gas cylinder in the box, and the grinder is battery powered. The big levers on the top of the device that look like beer pulls are hand pumps that push the water through the coffee grounds. And the coffee was great. The ice cream was from Amorinos, the shop being disappointing only in that it didn't do hot chocolate or coffee as well (that's the shop at the Bastille, apparently) But the ice cream was good.

And a suprise fly-by in honour of our visit. 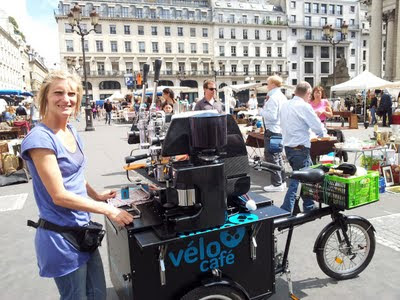 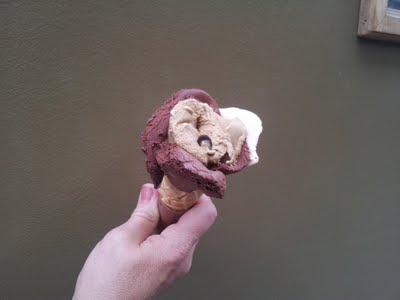 Posted by Mark In Mayenne at 02:17 2 comments: Links to this post

The typical citizen is obliged to be honest and upstanding, and has a corresponding right to be presumed to be so. So in law, a person is deemed to be innocent until it is proven beyond reasonable doubt that he or she is not.

So if you wish to accuse someone of a crime, it is up to you to prove your case beyond reasonable doubt. This is not always easy, and a lack of evidence or a lack of witnesses (or other things) can make it impossible.

Defending yourself against a criminal charge is stressful; a lot is at stake, and mistakes can be made. Accusing a person of a crime whilst knowing the accusation to be false, and lying in court are both frowned upon. In France, an accusation known to be false is a "dénonciation calomnieuse" and making one is a crime.

It doesn't take a brain the size of a planet, nor a Masters' Degree in logic to realise that failure to prove your case beyond reasonable doubt against a person who is presumed to be innocent, does not automatically mean that your accusation was false, or known to be false. And yet this illogic was written into French law: if you failed to prove your case, you were automatically guilty of "dénonciation calomnieuse".

It took a ruling by the European Court of Human Rights on 30 June this year to correct this error on the basis that it overturned the presumption of innocence. I think that the ECHR is a Good Thing.
Posted by Mark In Mayenne at 05:32 1 comment: Links to this post

A sunny Sunday afternoon, the ideal time for fixing my water-carrying cart. Last time I tried to use it, the handle broke, so I went off to get a new bit of wood, and also invest in a proper tow-ball towing hook, the better to attach it to my mower. 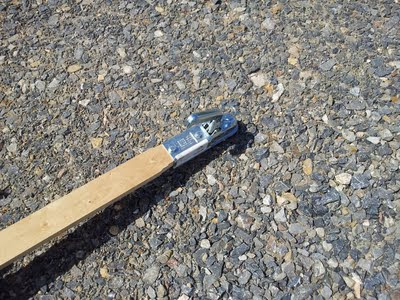 A fancy new tow hook for the ball on the back of the mower. New pine handle too, though I was a bit worried it might not be strong enough. 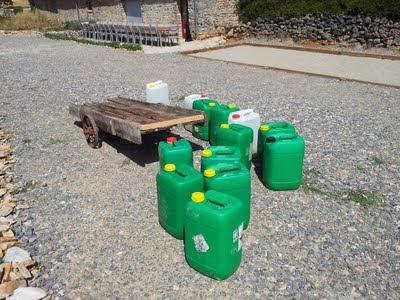 The jerricans hold 25 litres each; there are 13 of them. Total load 325 kilos. My mower can just about manage to pull the cart loaded up with water from the well. Did it work? No. The cross-member to which the handle was attached at the front of the cart couldn't take the load, and split. Time for a pause and a new cross-member.
Posted by Mark In Mayenne at 07:26 3 comments: Links to this post

Here, in the throbbing metropolis of St Pierre sur Erve, there is always something to be getting on with. During the weekends we are looking after clients, and between clients there is gardening that has to be done, and even if it's raining, there are housework and renovation projects to do indoors. Taking a break is a discipline, but a necessary one. This Wednesday we went off to lunch La Flèche.

World-famous in Pays de La Loire for its zoo, La Flèche is a pretty town on the banks of Le Loir, with a nice restaurant in a converted mill close to the town centre. Lunch there, followed by a troll around the town. B&B in a nearby chateau with a pretty garden, and the next day, a little walk along the river. Saw three Kingfishers, but I wasn't anywhere near fast enough to capture them on camera. 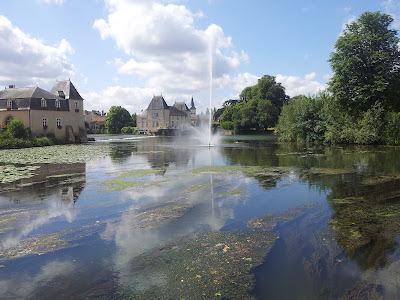 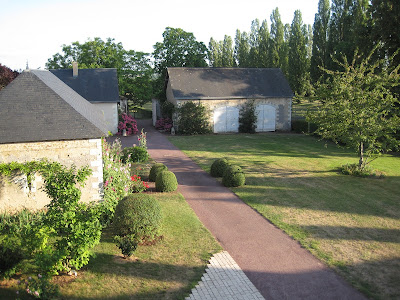 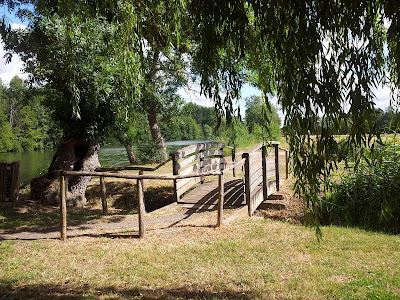 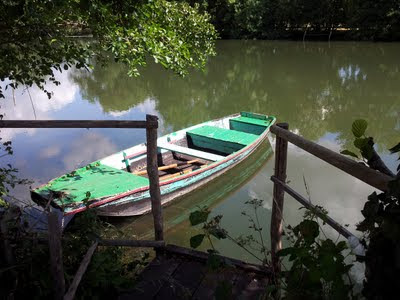 Posted by Mark In Mayenne at 05:43 No comments: Links to this post