The village of Vaiges (pop. about 1,200) is perhaps 10 minutes' drive from my very own St Pierre sur Erve (pop. about 150).    About halfway between the two places is a big quarry, an open-cast limestone mine.  This is a boon for Vaiges, since the quarry lies within their boundary, and it pays quite a lot of tax.  This to the extent that, according to our mayor, their council has about 440,000 euros to spend each year; that takes some serious spending on a population of 1200.  Surrounding villages are enviously eyeing this wealth, and proposals for reducing local government costs by combining small communities are being actively debated.

The town hall (le mairie) looks very fancy, and the gardens have recently been landscaped and redone.  There is a new car parking area beside it, and the street lamps are new, and illuminated at night with little LED rings at about chest height so that semi-blind people don't walk into them.  The salle socio-culturelle (village hall/community centre?) has also been done up recently.   It now features a fancy professional kitchen with all mod cons, and a new stage/theatre, with bar, lighting, sound system; everything you could want except, it would seem, air conditioning. 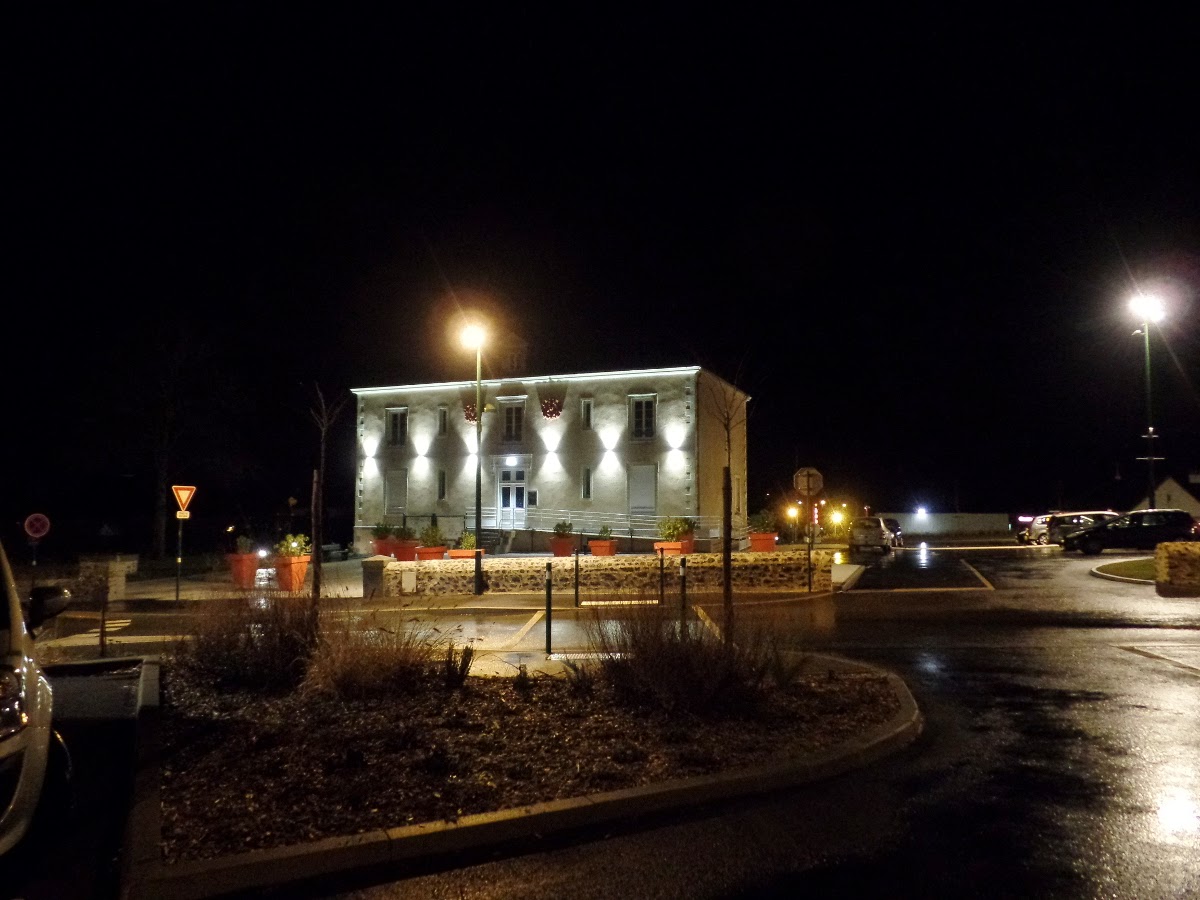 It is here that my dairy farming and guitar-playing friend Alain, and his troupe, perform their annual amateur dramatics offering.  Last night was the last night and we went along to see.  The evening starts with offerings from the younger performers, sometimes a short play, this time with a series of comedy sketches.  Then the main event, a comedy about a French camping holiday site, featuring various figures recognisable from the local community.  It's fun to spot the local personalities.  There's Alain, of course, and the lady who works in the supermarket.  Plus the one-armed garden nursery manager, the trumpet-player and the flute-player. 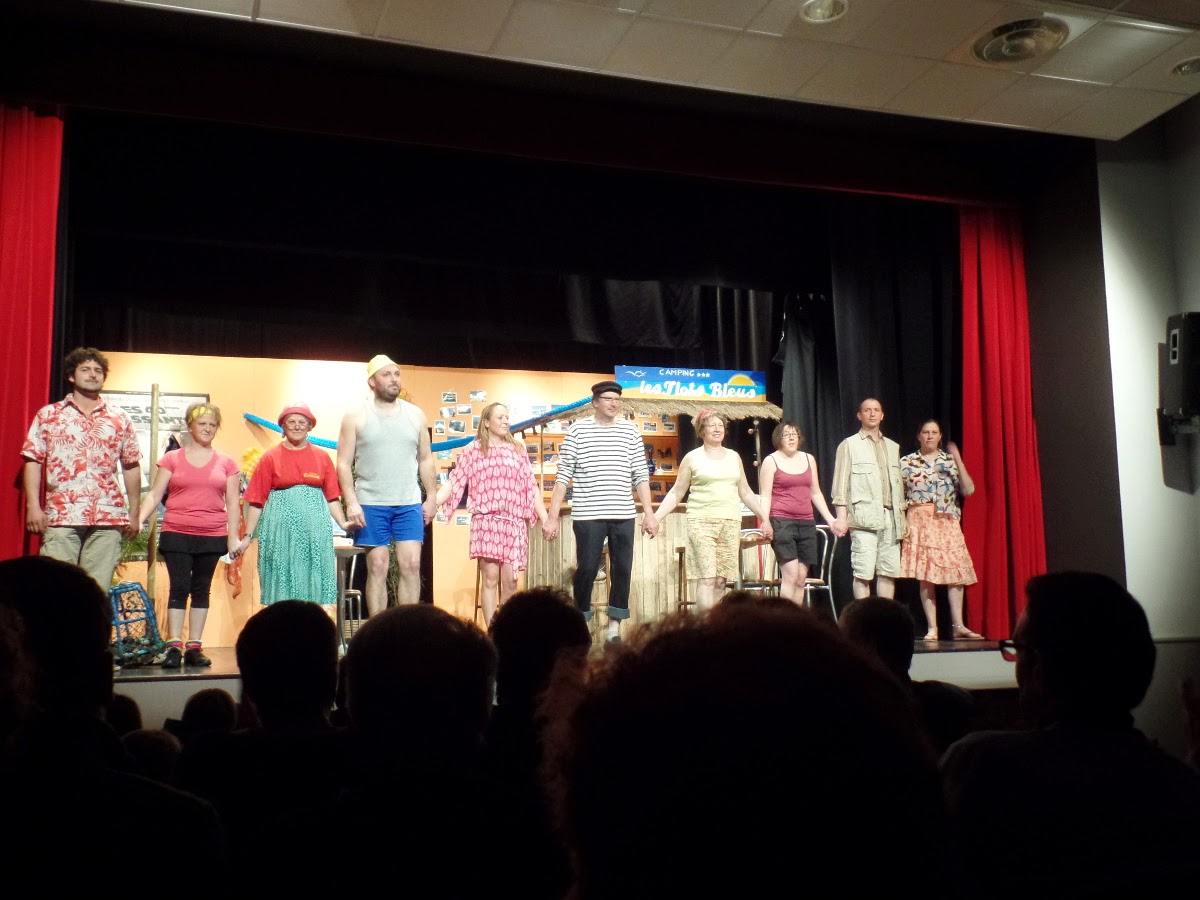 There's a tombola at half time, with crêpes, beer and other delights on sale, and an opportunity to mix with the people you recognise.  And I won a very fine Easter cactus in a pot.  These kinds of plants do well in the conservatory, and I have various shades of red, but no pink-and-white.  Cool. 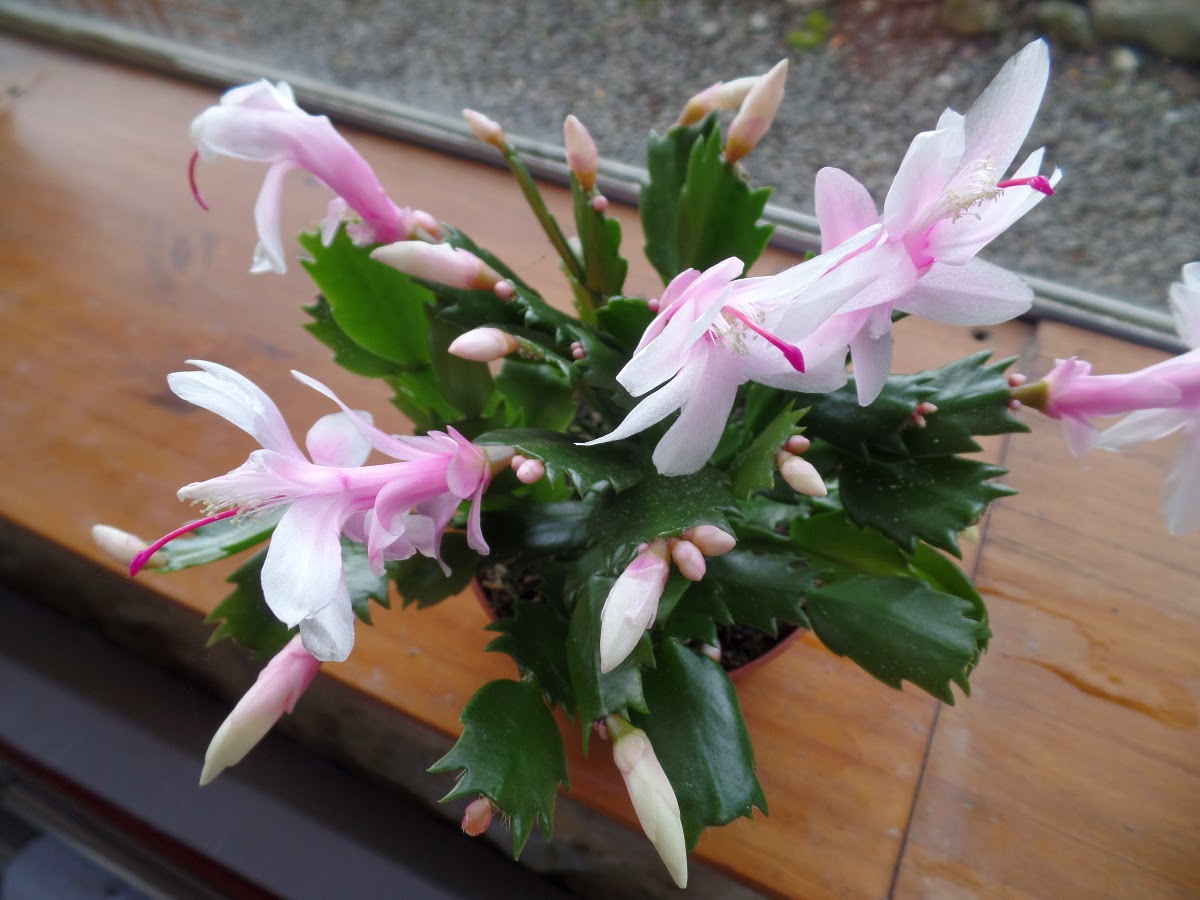 In the end, it's a fun, if rather warm, night out.  And even though my French isn't up to following all of the rapid-fire dialog, nor catching all the jokes, I can still grasp the plot.  But as a fund-raiser for the school, it's a great way to contribute and be entertained at the same time.

The owner of the mill in the village has been improving the site, trimming hedges and cutting down some of the trees.  In the spirit of support for Charlie Hebdo, one of the trunks was left standing and carved into a pencil.   The guy who lives just down the road from this assures me that his own artistic carving is of a rabbit. 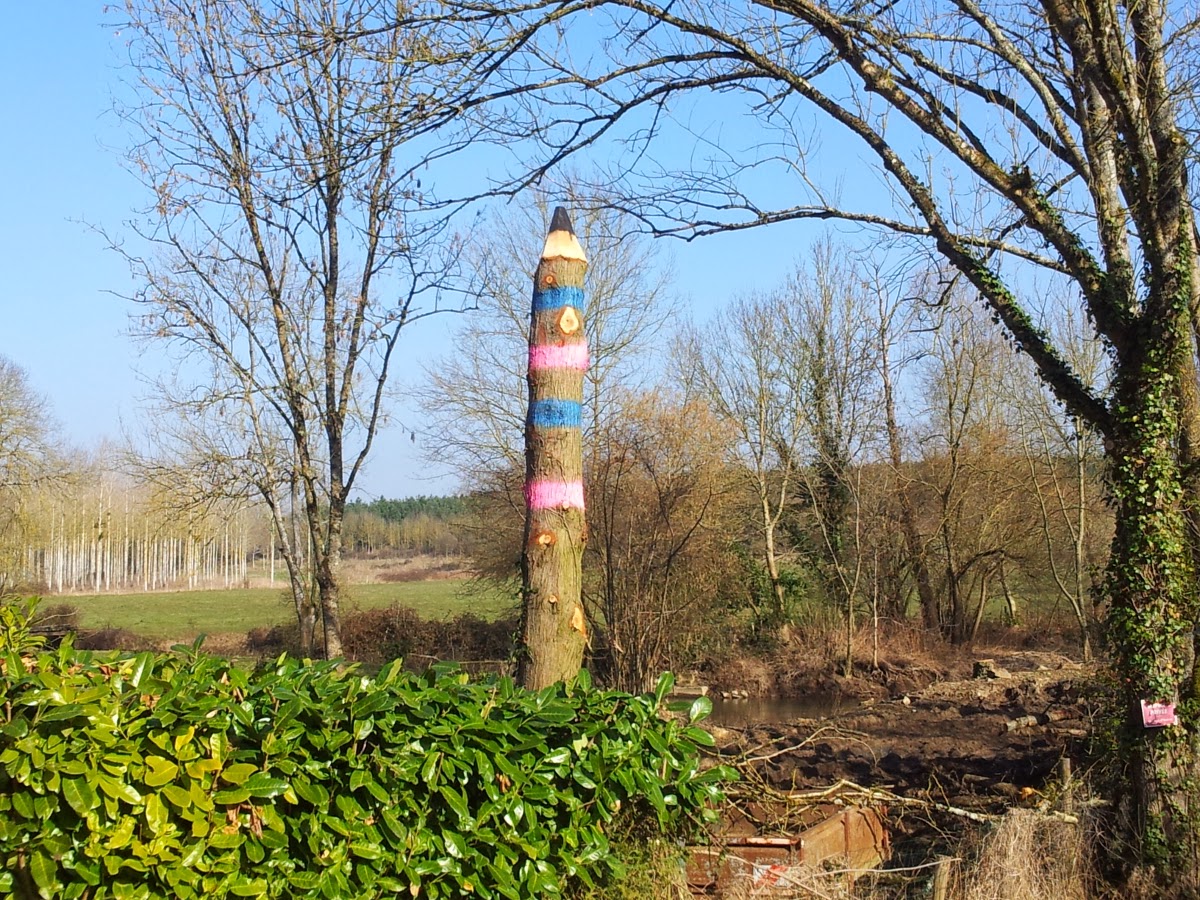 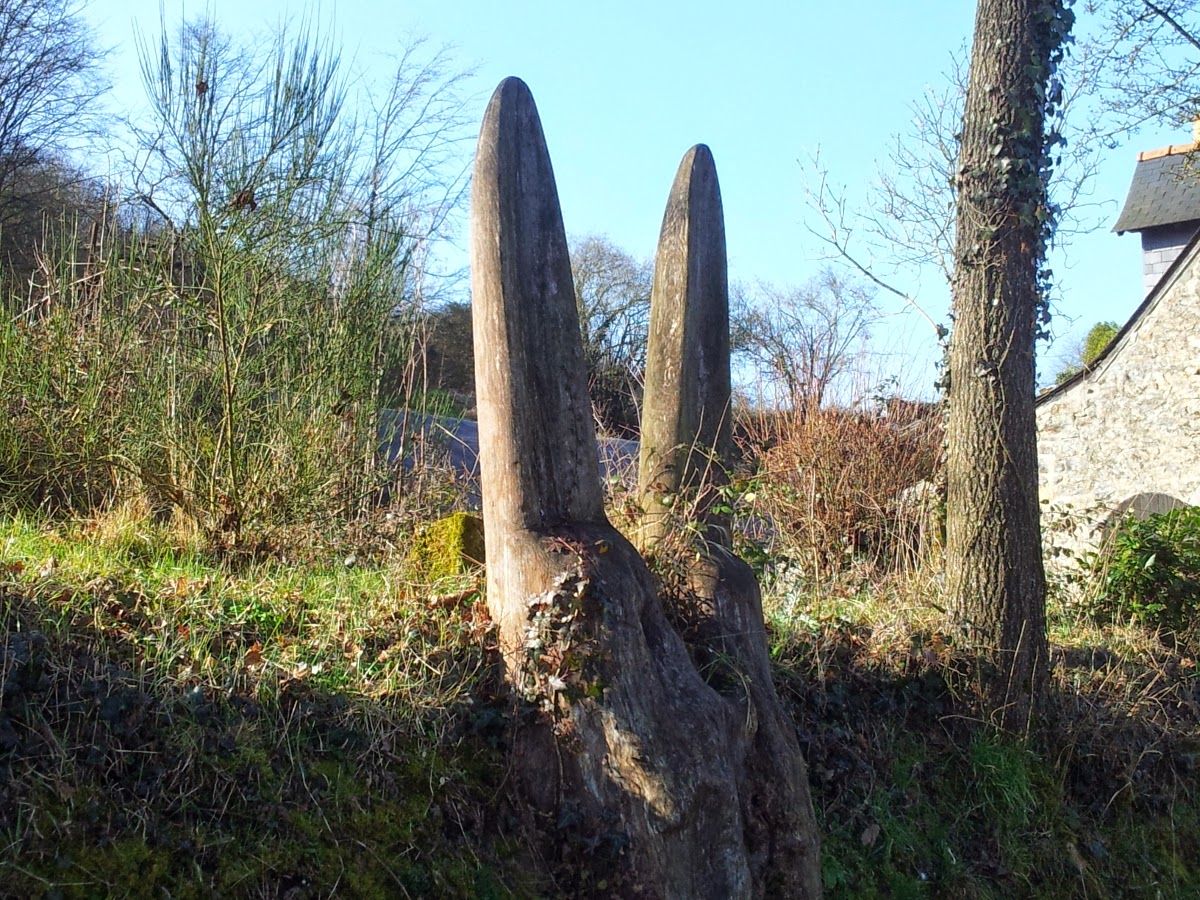 I was talking to our ex-mayor not long ago, about, amongst other things, the recent closure of one of the two bakers in our local village.  The owners have retired, but they can't sell their shop, he explained. 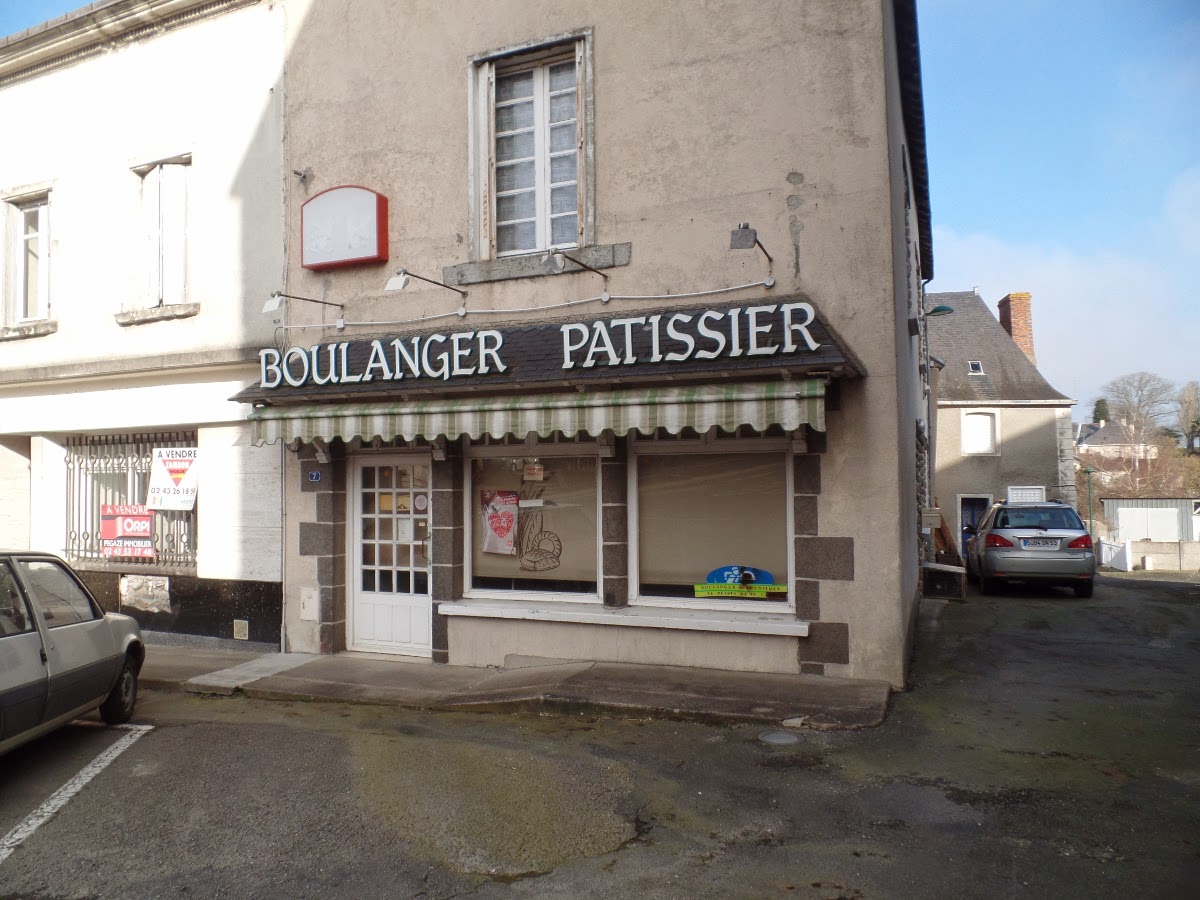 Now it's not really surprising that the shop would be hard to sell: the one next door has been for sale for all the time we have been here; getting on for 8 years.  But this one in particular (he told me) has also been hit by an update to the norms that apply to bakeries.

Norms abound in France.  They are government-imposed specifications that range from the size and content of school dinners for children of different ages, the weight and height-of-fall of children that a swimming pool cover must withstand, to what we would call building regs.  The norms have legal status.

In this case, (as I understand it) our baker used to make the dough in a building separate from his oven; across the street in fact, and carried the resultant unbaked loaves between the buildings to be baked.  I guess he covered them with something to keep the dust off them in this short journey, but I don't know.  Anyway, the norms now say you mustn't do this.

When a new norm comes into being, it's often not applied to existing premises, but takes effect when there is a change of ownership or major renovations.  As a result, our baker was happily baking bread that people were buying and eating, with, as far as I am aware, no ill effects, but now he's gone, the premises can no longer be used as a bakery.  And I'm willing to bet that the sale value of the shop reflects this.

P.S. As an aside, many villages, including my own, had a central, communal bread oven, and when it was fired up, the women of the village would carry their dough loaves (through the village, in the open air), to get them baked.  And what's wrong with that?

The disabled persons' toilet in our local music school has a disco in it.  No kidding: when you go in, different coloured strobes start to flash, a glittering ball spins and disco music plays.  As I reflected on the implications of this for wheelchair-bound people, it struck me that for me, anyway, dancing at the same time as using the toilet for its usual purpose would be a bad idea. 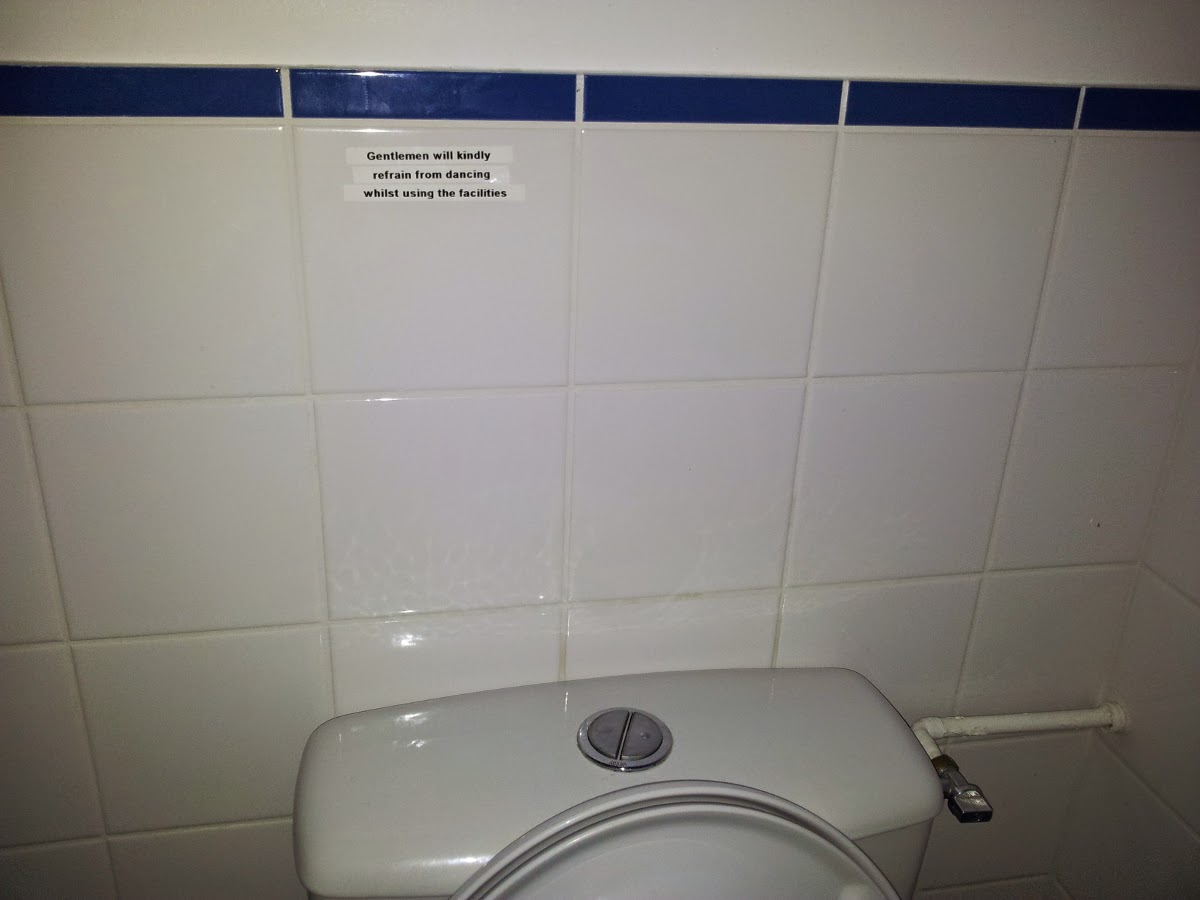 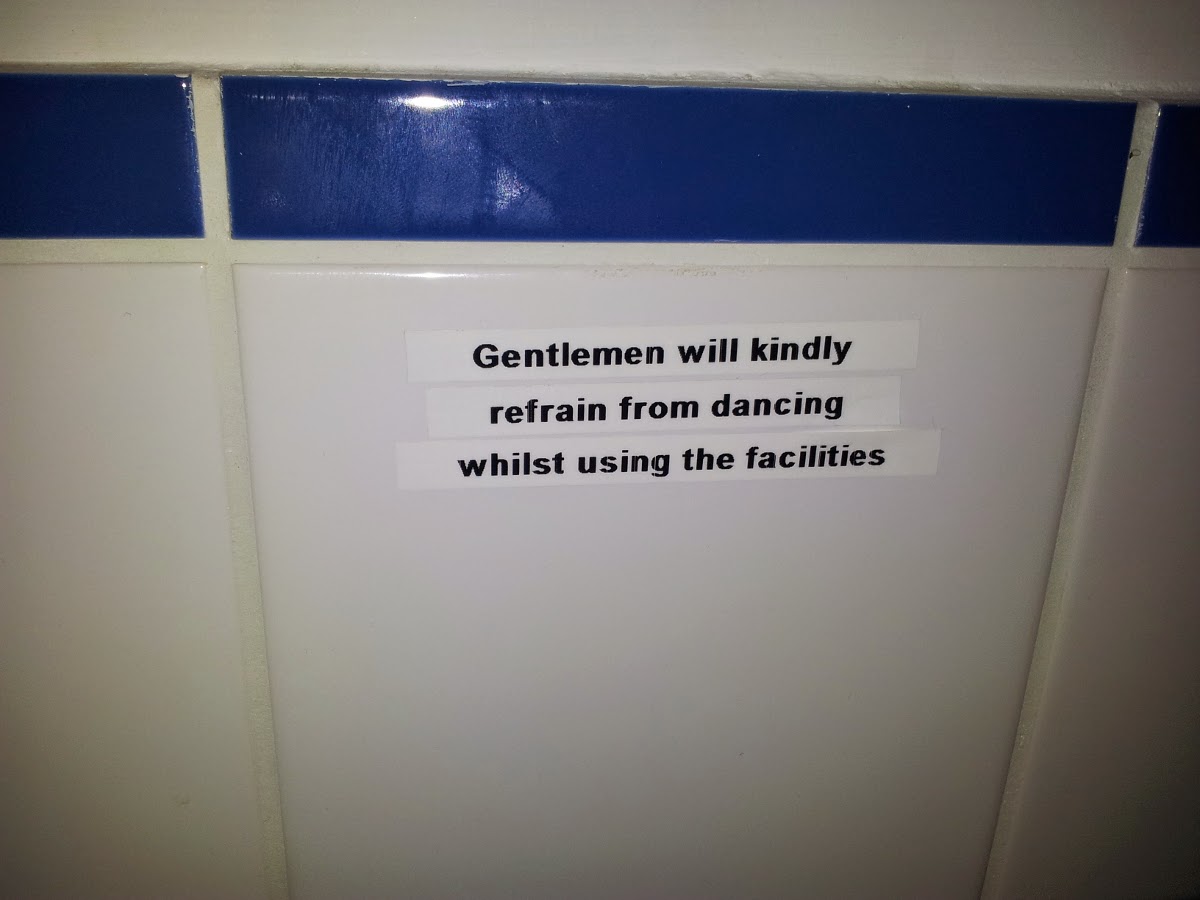 The trouble is, I was then asked when one uses "whilst" as opposed to "while".  Tricky one, that.
Posted by Mark In Mayenne at 13:46 6 comments: 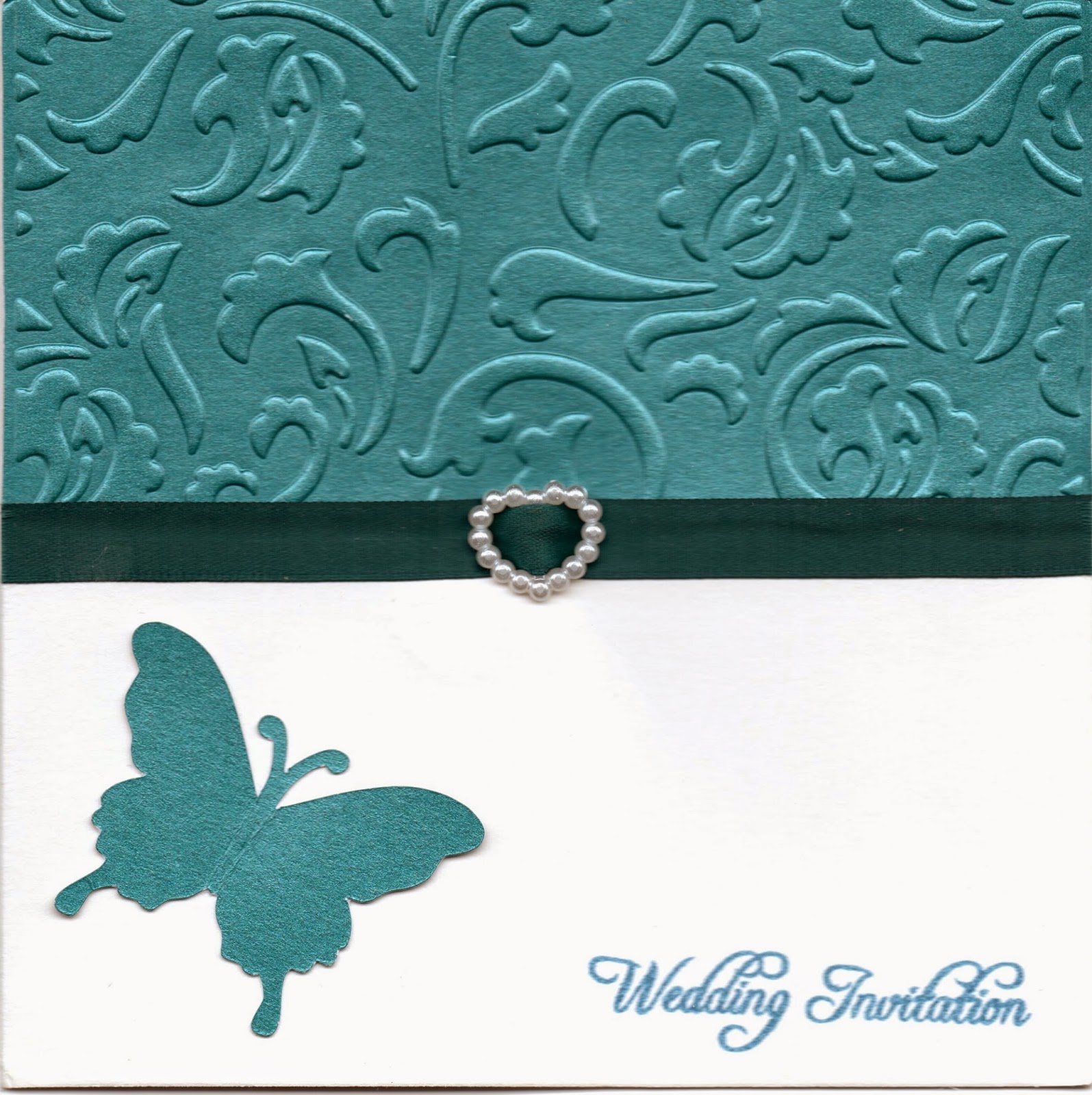 One of the aspects of running a gîte, that we didn't really grasp before taking it on, is the obvious (in hindsight) fact that people come when they aren't working, i.e. at weekends or holiday times.  And when most people who are not employed in the hospitality business are not working, most people employed in the hospitality business are up to their necks in it.   Since most customers come for weekends, this fact tends to screw up our weekends.

Mostly this is not too much of a problem.  So sometimes I miss performing at a concert, or I miss going to one from time to time.  No big deal.  But just occasionally something crops up that is significantly annoying to miss, to whit the invitation above, to an event where my fine nephew is marrying the equally fine lady who has borne him his equally fine daughter.