I popped out this morning for a quick coffee with a friend from the village.  I noticed in passing, the river has frozen over, just before the bridge.  Downstream, the other side of the weir, the river was flowing smoothly, unfrozen. 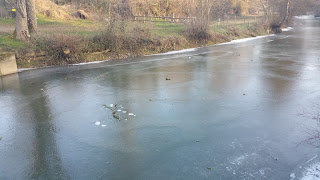 When we were in Wimbledon just before Christmas, we came across this outfit selling extraordinarily realistic tools made out of chocolate.  I thought they were very impressive, and the chocolate samples tasted good, too.   I don't know how they get the finishes, but they include very good brass, steel and rusty iron effects.  I got some for my brother-in-law who is a gifted mechanic, amongst other things. 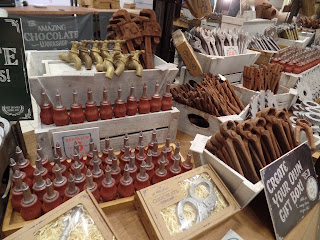 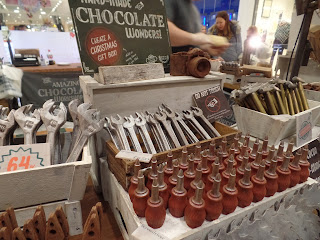 It struck me that if they could get around to making a decent teapot, it could make an ideal leaving present for that useless departing colleague.

Breaking news from the outback

It's getting rather wintry here, the ground is starting to freeze, and there is a limit to how much gardening work that can be done.   I did manage to pressure-wash the fat filters from the septic tanks the other day, but I didn't take any photos of the process.  It was a bit messy.

The compost heap subjugation project is proceeding.  In the early afternoon, when the day has warmed up a bit, I am shredding the top layer of the existing heap and putting the result into the new enclosure, where I hope it will rot down properly.  The old compost revealed by this process is going onto the veg patch.  Should be finished by Spring. 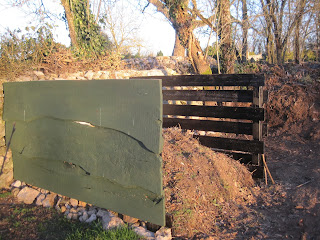 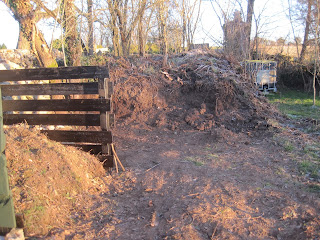 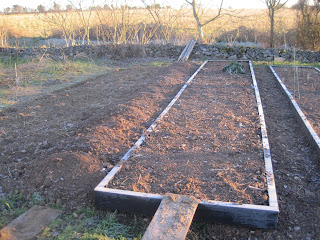 In other news, a big dead tree down the road by the restaurant was blown down in the recent storms - good job that the car that is often parked beside it wasn't there at the time.  And the restaurant, open again after the Christmas break, has some new classy signs up. 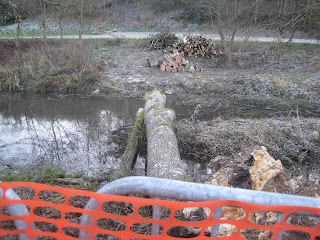 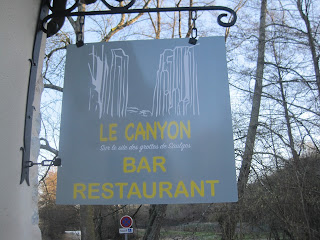 I have admired jazz musicians for many years, and envy their ability to improvise tunes over a chord sequence.   I recently signed up to a jazz workshop at the music school, and one of the excercises that we have been assigned got me thinking about a link between the excercise and mathematical group theory.  This kind of group is what I refer to in the title, so if you were expecting something about rock or jazz bands, I apologise for the disappointment.  But bear with me; this only needs junior-school maths, and it doesn't hurt a bit.

First, a gentle introduction to group theory.  Mathematicians study what they are pleased to call groups, because groups are the smallest entities, systems, things, whatever you want to call them, in which you can solve equations like 3+X=7 or 12.5 x X=73.4.   (Lower case x signifies multiply)   More generally, you can solve a*X=b, where a and b are known members of a set (such as the whole numbers, or any number that exists) and * is a way of combining two elements of the set to produce a third one (e.g. addition, multiplication)

A group is a combination of a set of things, and an operation that can be performed on them, such that a*X=b can always be solved to a single value for X.  If we call the set of all the whole numbers N, and the set of all possible numbers R, then in the above examples, the group exemplified by 3+X=7 can be written as (N,+) and the group exemplified by 12.5 x X=73.4 as (R,x)   Note that (N,x) is not a group because (for example) 3 x X=11 does not have a solution that is a whole number.   (Excercise for the reader:  Is (R,+) a group?)

The sets N and R both have an infinite number of members, but we can make smaller groups that are easier to get one's head around.  Perhaps the most trivial is the one with just one member, 0.  We can draw the set by listing its members inside brackets like so: {0} and the group is drawn as ({0},+).  It has only one equation, 0+X=0 and it has only one solution, X=0 which is not surprising.

The next size up has two elements, and we can draw it ({0,1},+)    The + this time has to represent addition modulo2, that is, if we get an answer of 2 or more, keep subtracting 2 until we get to 0 or 1.  There are four equations of the form a+X=b, one for each of the two possible values of a and b, and all the equations are soluble.

It is a general truth that the order of a subgroup divides the order of the group exactly.  (So, for example, a group with a prime order has no subgroups)

On to music, specifically western music that has an 8-note scale that comprises 12 semitones.  We'll make the approximation that all the semitones are equal (not strictly true for perfect scales, but widely adopted in western music).  We'll also equate all the notes with the same name, so we don't distinguish between F# and the same note one or more octaves higher or lower.

If we look at the interval that has 9 semitones, we go from C to A, to F#, to D# and back to C.  This is our minor third group (backwards)  and has order 4 because 4 is the smallest multiple of 9 that is also a multiple of 12.   The interval of 8 semitones gives us a subgroup of order 6; the "whole tone" scale.

An important and common interval in music is the fifth (e.g. from C to G); it has 7 semitones.   In our jazz workshop we are assigned to learn the minor 7th arpeggio in all keys, starting with C and moving to the next key by going up a 5th (to G, then 7 semitones more on to D and so on).

Musicians call this the cycle of fifths, and it cycles through the whole octave because the smallest multiple of 7 that is also a multiple of 12 is 12x7. 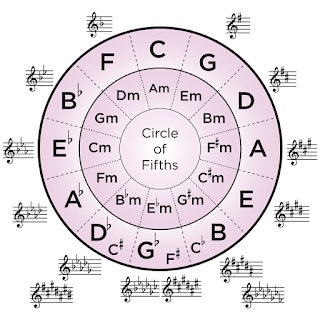 Circle of fifths from education.davidspencer.ca
Posted by Mark In Mayenne at 09:09 1 comment: 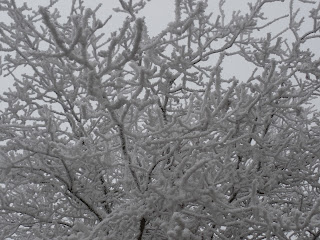 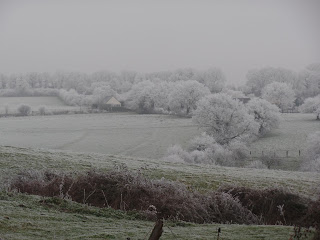 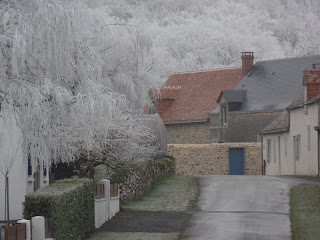 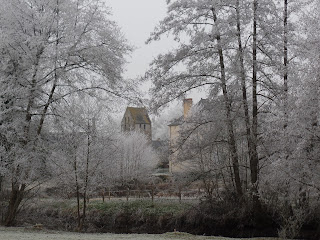 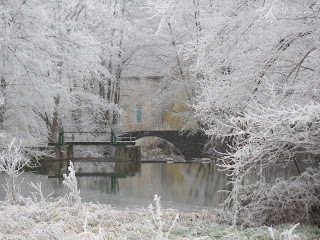 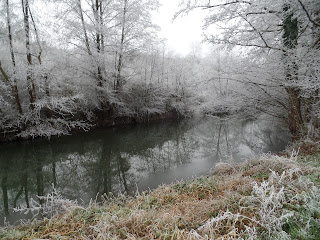