There was a presentation on the traditional music of the Mayenne, given in the château of Ste Suzanne today.   Broadly, it is similar to folk music the world over: songs to spread the news, bawdy wedding night songs, and songs to help pass the time while doing the boring routine tasks of peasant life.  So we heard the news of the murder of the preacher in Entrammes (it really did happen), and the song about the lady with the limp going off to market with a basket of goods that disappears (eggs roll away, geese fly off, etc), in a growing list akin to One Man Went to Mow, or the Twelve Days of Christmas.

The little group featured a hurdy-gurdy, an instrument you don't see (or hear) much of these days.   The example here featured six strings; four of them each sound a fixed note, and the other two are stopped by a set of keys to create different pitches.   All of the strings sound for all of the time while the handle is turning;  the effect is very similar to that of bagpipes, which perhaps accounts for the instrument's lack of popularity. 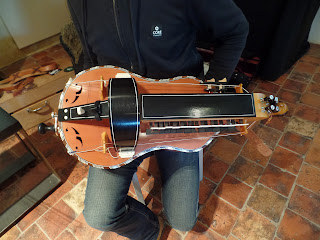 There is museum of mechanical music near to our house in France - extraordinary machines; many of them huge!

I have seen such a museulm in Germany too; they are most impressive.