A long time ago when I was in junior school, the headmaster organised for some professional singers to come and interpret some works for us.   One of the songs that the lady of the team sang was Cherry Ripe.  For whatever reason, that song has stayed with me, and it's going through my head as I pick the ripe cherries from a tree in the garden.


The tree has been there for a good 15 years, and last year was the first time it gave any cherries.  It is covered in fruit again this year, and it's a competition between the birds and me to see who can get there first.

This afternoon I was watering the potatoes and enjoying a few stolen cherries, when I heard a bird in the tree.   In amongst the foliage near the top, it was hanging upside-down to eat the dangling fruit.  It looks to me like a great spotted woodpecker, a female since it had a red splodge on the lower belly but none on the head.  The first photo below is the best I could do before it flew off.  It's hard to spot but it's right in the middle of the picture, and the blurry red area just by the intersection of the two branches is its red behind.  its head is down and to the right.  You're looking at its back, from below.   Another masterpiece in support of my secret ambition to become a BBC wildlife photographer. 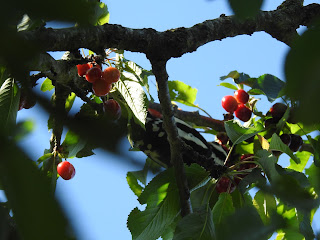 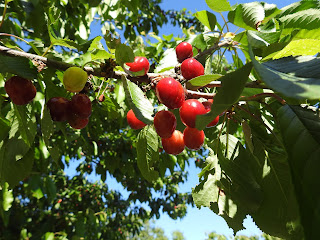 Very envious!
All I have here is the
surinam cherry...a most inferior substitute!

Perfect for a CherryPie ;-)