When we opened the gîte for business, all those 13 years ago, we had decided that we would contract out the laundry.   We looked around, and Blanchisserie du Maine seemed to have a monopoly in the area.   It happened that they also did the laundry for the smaller gîte run by the village; they collected the dirty laundry from, and delivered the clean laundry to, a shed next to the salle communale to which they had a key.  So we piggy-backed on this relationship.

It was not always easy.   Although our linens were marked with our name, we often found we got back a bit less than we sent, and sometimes got some of other people's linens instead.   At the start we would phone them up to let them know, and see what they would do to fix it, but it became clear that this wasn't going to change anything, so we relaxed into a relationship where at least we normally got the amount of linens we needed for our next customers, and once a year or so we'd do a review and get them to replace lost items, maybe buy some more ourselves.

Recently they told us that they would only process 50 kilos minimum of any particular type of item (sheets etc. or towels).   Since this is way beyond what we normally send them, would we kindly find a different solution to our laundry needs?   They pointed us towards SARL Blanchisserie Guyard, a much smaller outfit on the outskirts of Laval.

First contact wasn't promising; phone calls not returned, emails not replied to promptly.   But apparently, poor M. Guyard was inundated with soon-to-be-ex customers of BdM looking to sign up with him.  We dropped in to say hello, explained our needs, and he agreed to help.  We have only sent and received two batches so far, but it looks promising.  He collected when he said he would, and that from our gîte, so we don't have to shuttle the linens to and from the shed in the village.  His prices are keen too.   Could be that BdM have done us a favour. 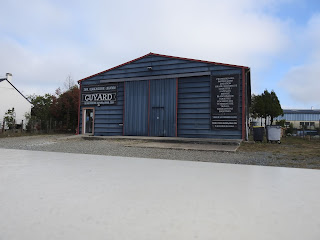 Keep us in the loop.