I went into Evron with the Renault Espace and while I was there I filled it with diesel (the tank, not the car).  The pump took my credit card and indicated that I could have up to €120 worth of fuel.   It wasn't enough money to fill the tank (that wasn't empty, either).  Well, that's never happened before. 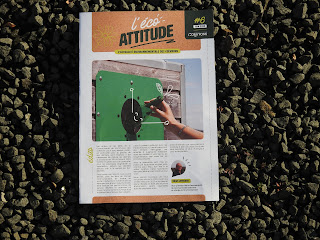 On a different but related topic, this little turd of a document arrived chez nous the other day.   It purports to be about Eco-friendship, and is headed "Eco Attitude" but what it's actually about is a new tax on household rubbish.  Except that it's apparently not a new tax because it will replace an old one.  Fine logic going on there.   The upshot is that they will be charging residents for every time they open a bin to deposit (up to 50 litres of) non-recyclable household waste.  And that it will cost more than the old tax.

The justifications include the eco-friendly narrative, but also other, more intriguing ones.   There is apparently a mandate to reduce household rubbish by 15% by 2030.  Really?   They don't say who decided this, but I'm wondering who voted for them.  Also there is planned to be a large increase in the tax due on products said to be polluting, so the household tax will have to rise in keeping with that.  Again, who decided this tax and how do we get rid of them (legally)?

Incidentally, private individuals can use the local recycling centres for free but businesses have to pay.  As a consequence, fly tipping is a serious problem in parts of the country.   Well, guess what?