I was looking around for a big water tub that I could use to quickly fill watering cans.  The current method of using a hose pipe from one of my big metre-cubed containers takes too long.   The sort of thing I had in mind was a big circular one holding 700 litres or so, called here (since intended for water for animals) an abreuvoir.   I looked at the price - of the order of €150 or so.  Not doing that.

So I enquired through the village self-help Watsapp group, and it turns out the Pierrick has something that might be suitable; a bit more than half of a metre-cubed container, the other part of which he is using to hold water for his goats.   It's perfect, and he gave it to me. 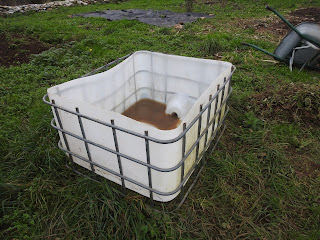 So I have been making a concrete hard standing for it, next to one of the existing containers, from which I can fill it up.   I'm in the process of digging up the stones from the veg patch so I'm using them as a base for the concrete. 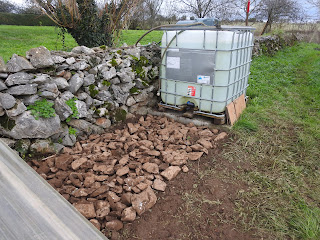 I always manage to underestimate the amount of concrete I will need.   I bought ten 30 Kg bags, I used six for the rough first coat over the stones, and the remaining four got me about 40% along the top.   I'll need six more bags. 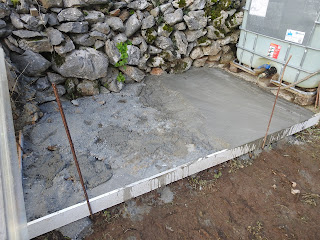 This is how it will finish.   I turned the original vat through 90° and put the new one alongside it.   Since they're deeper than they are wide they take up less length of the concrete base than I had planned, so there is room left for something else, such as a tool chest for example.   Maybe I will get one; it would be useful.   Meanwhile, we have frosty nights this week so I will finish the concreting when they are over. 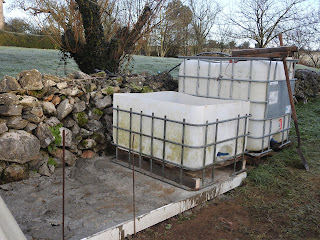 Sounds very exciting. The cement vendors would like you.