At the oriental garden (see below) there was the inevitable tea and souvenir shop.  Browsing the gardening books I came across a book about trees, discussing them from an aspect I had not seen before:  rather than being a catalogue of different tree types and how to grow them, it discussed general aspects of tree growth and form, what to look for and how to recognise certain features.

I like trees and the subject was new to me, so I bought the book.  It's not a profound read, and I got through it in an afternoon, but I learned some things I did not know before.  I had always thought, from way back in childhood, that a tree's root system extends more or less as far as the edge of the leaf canopy.  Not true, apparently: the roots can extend 3 or 4 times the diameter of the canopy and they are for the most part within 30cm of the surface.  Even the deepest water-gathering roots rarely penetrate down more than 4 meters deep.

Also, it was discovered as recently as 1996 that nearby trees of the same species will often (usually) interconnect their roots for mutual sustenance.   For example a tree beside a river will sustain its cousins farther away during periods of drought, and an adult tree is able to nourish its own saplings.  (This phenomenon has not been seen between trees of different species)

So the young Walnut trees along my road are probably interconnected already.  Some are possibly going to have to be cut down in future since they are too close together.  But the network of roots means that putting stump killer on the remaining stumps will be a bad idea; it might harm or kill the other Walnuts beside it, via the root system. 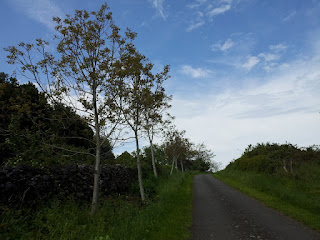 I also love trees, although I confess my knowledge is scant. I hadn't heard about the interconnection before but it makes a lot of sense. If we lived in a society that attributed more value to a holistic approach to the world, then I wonder if it would have come to light sooner?