These days, you're not allowed to describe fizzy wine made according to the method originated in Champagne as being made according to the Champgne method.  You have to say "traditional method".   This doesn't disguise the fact that champagne (the drink) is overpriced compared to the competition.

Last night we opened a bottle of fizz as part celebration of Anita's birthday.  It's one of the ones we bought on holiday in the Alsace region; a rosé, slightly off a hard brut in sweetness, and delicious.  And made, of course, using the traditional method.  I can't remember how much we paid for it, but I am confident that it was a lot less than a champagne of similar quality. 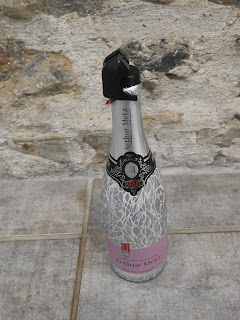 Later addition: I had a quick look on the Metz website; it looks like you can get a bottle of this fizz for a bit more than 8 euro.  Can't get a decent champagne for that.
Posted by Mark In Mayenne at 00:27

Cheers indeed!
We used to buy Saumur fizz...beat champagne by a long chalk.

There are good and bad Champagne vintages and good and bad other Bubbly wines. The best of all promote their products on tase and enjoyment (not a name).

The free bottle of Prosecco (I enjoyed in Italy) was far superior to a paid for bottle of Champagne (in Cambridge).