There is a project being run by the government (that is, the civil service) in France, to remove or disable the many small dams that permit water mills to operate.   There is a certain controversy around this, and is some cases, feelings run high.

We have the unusual experience in the throbbing metropolis of St Pierre sur Erve, that someone has taken things into their own hands, and cut a slice out of the village's barrage.   This is rather naughty.  I am told that the perpetrator risks a fine of €15,000 to €30,000 and six months in prison.

Here is a photo I took yesterday.  It's a narrow hole and won't make much difference when the river is in full flood, but still.  Slapped wrists.   I have also been told who did it, but I have no evidence of my own, and probably shouldn't say anything, given that the situation seems to be fraught with legal issues. 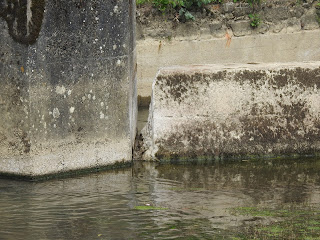 I have been giving some thought as to why the government would want to destroy hydro power.   I suspect that hydro power in private hands would be the subject of great jealousy in the future when energy gets really expensive.   I have already seen reports of water mills being sabotaged by French citizens, and I can imagine that these incidents would get worse in future.   Perhaps having the government with a near-monopoly on hydro electricity generation might avoid much civil unrest.   That's aside from the revenue implications for the state.
Posted by Mark In Mayenne at 23:46

This was being mooted before we left France...on the grounds of - finally - obeying the EU water declaration. The idea seemed to be to have long stretches of running water.
No idea of stopping farmers and their damned pollution, though.