We own the small field opposite our place, it's on the other side of the road.  I haven't done anything with it for about ten years and it is reverting to whatever would be its natural state.  Walnut trees seem to do well in this area, and numerous self-seeded ones are now growing there.   I have decided to do, in a small way, a little management of the area, and I have just finished planting 25 Hornbeam trees.

I chose small trees because, being small, they establish themselves very quickly, and often overtake initially larger trees planted at the same time.  They need less care, and they're also cheaper, at one euro each.  Hornbeams are said to prefer chalky soil, and resist drought, both of which are characteristic of the growing conditions around here.   If this lot do well, I will do the same thing next year.   I am hoping that, in time, the field will produce some firewood, but also that it will become a more natural woodland area.

There are so many stones in the ground that I dug out, that the trees are at a level a bit below the natural soil level.   I am hoping that this will result in them being better shaded by the surrounding grass, so they are less likely to dry out, and more likely to survive. 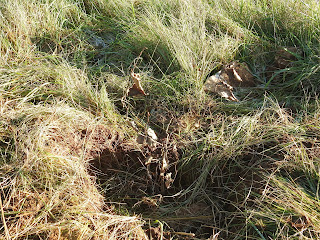 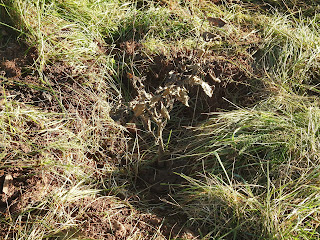 These two trees are in a different part of the same field.  The big one is a present from a friend, and I am pleased to see that the leaves are now gone.  The shedding of leaves is an active process on the part of the tree, and this proves that the tree is still alive.   The smaller tree is typical of the growth here of walnut seedlings.  Often, some creature, either a hare or perhaps a deer, nibbles the end of the single growing shoot, or takes the bark off it.   The tree then sprouts multiple side shoots, and eventually another leader emerges, protected from damage by the remaining shoots. 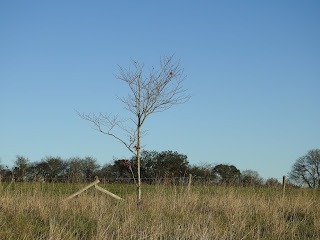 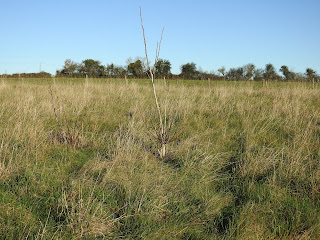 As I was coming back in after finishing the planting, a neighbour stopped by with his tractor.  He had been working on renewing some fence posts in a nearby field.   We commented on the brambles that have attached themselves to my fence over the past several years.  I had been planning to attack them with a blade on my strimmer.  He's going to clear them for me with his tractor.  Good plan. 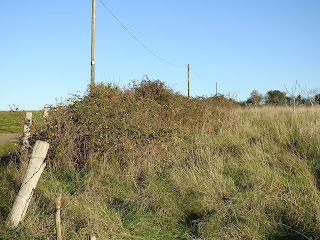 The operative word is one euro each for me.