It was a mild Spring-like morning  unusual for February, so I went for a walk to burn off some calories and enjoy the sunshine.   First thing I noticed was this little device in the river.  I wonder what it's for?   I couldn't see any sensors or recording devices on it, it just seems to sit in the water, turning with the stream.   I can't believe it will last long: the river often rises enough to submerge this thing, and I imagine that either the little wooden slats will break off or the whole thing will be carried downstream. 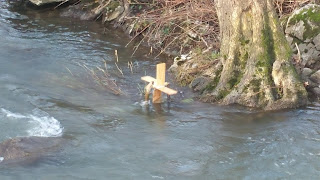 A bit farther along the walk, I come to these steps.   The first time I encountered them, I was on a mountain bike, coming the other way.   They were a bit of a surprise.   The track had begun, level, wide and grassy, but had become rather narrower, muddier and steep downhill.   It had also become tilted to the left, encouraging my bike to head towards a ditch and a stream that widened from time to time into an uninviting pool.   Applying the brakes on the muddy, tilted track achieved no deceleration, but an uncontrolled skid, so was abandoned as a strategy.  So the bike accelerated downhill until I turned a corner and there were the steps.  Nothing to do but stand on the pedals and let the bike take them as it would.  No harm done in the end, but the chain came off.  These days if I'm on the bike I walk this bit. 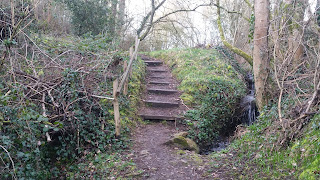 At the farthest point of the walk is an ex-mill where lives a big dog, a St Bernard I think.  He usually barks as I approach, but is friendly and wimpers with pleasure if I stroke his neck.  Not there today, perhaps it's a bit early for him.

On the way back I pass a smallholding with a couple of geese.  One took a dislike to me.  Oh yeah?  Bring it on. I spread out my fingers like talons, raised my arms and hissed at it.  The reaction was immediate.  "What?  Just kidding.... looking for grass actually.... er, have a nice day". 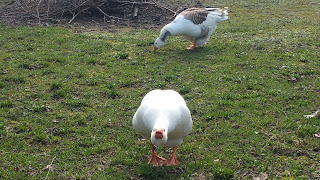 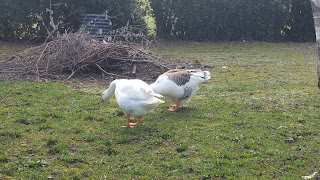 Geese are funny, I give some of them a wide berth when I walk round one of my local ponds.

I used to live next to a factory that guarded its grounds with geese - what a racket if anyone walked by after hours.