We got two days' worth of cycling in during this holiday.  There was some fine weather when we first arrived in Neuf-Brisach, but then it turned wintry: cold, windy and raining.  We're leisure bikers and braving the rain and cold on a bicycle isn't our idea of fun.

While we were still enjoying the last of the Summer, we went along the canal that runs close to the town, imiginatively called the Neuf-Brisach Canal, starting at Bliesheim, a small village nearby.  It has to be said that the people who complain that the long, straight canals are boring to cycle along, have a point.  But the scenery was pleasant, the weather fine, and the cycle track paved and level.  As soon as we had left the village, we had the path to ourselves.

It was here that we first became aware of the enourmous size of the cultivated fields there.  Cars the other side of the field were tiny dots going past. 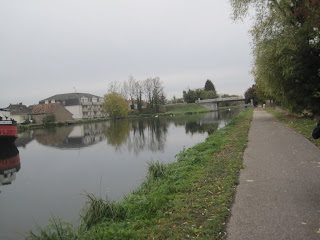 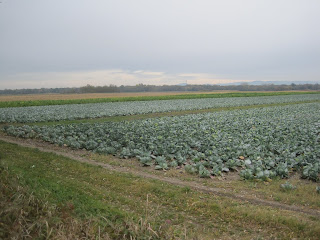 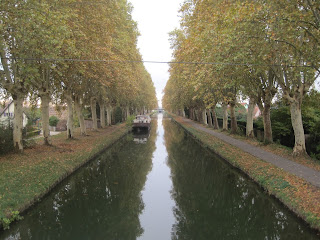 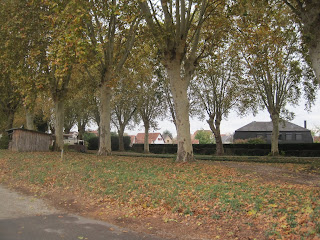 The second cycle trip we made was later in the holiday, once the initial cold and rainy spell had passed and the daytime temperatures had warmed to a balmy 12 degrees or so.  In the morning we went along another straight canal, but in the afternoon we chose a canal path that looked wiggly on the map, on the basis that it would be more interesting.  It was.  It was a disused canal, no longer navigable.  The locks no longer exist and have been boarded up with wooden dams to keep the water level up.  Dotted along its path were the prettiest ex-lock-keeper cottages you can imagine, and since there was no traffic on the water, it was quiet and calm. 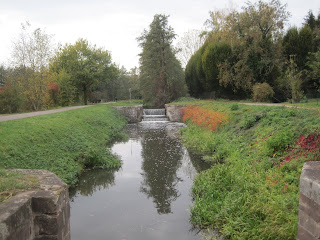 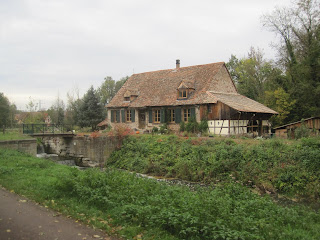 Fabulous scenery to enjoy on a cycle ride :-)