I've got a trike,

You can ride it if you like, it's got a basket, a bell that rings and things that make it easy to ride and to transport.

I have had a bike for as long as I can remember.   Strictly speaking, my first bike was a trike, it was red and had just one gear.   I graduated to two-wheeled locomotion in the fullness of time and a bike was my main transport until I graduated from university.   Riding a bike is second nature to me.

This is not true for Anita, who learned to ride as an adult and has never felt quite so much at ease as I do.   And since she has had two hip replacements, falling off a bike is more dangerous than it used to be.    So we got her a trike.   It's not impossible to fall off a trike, but it's much more difficult.   And stopping and setting off is much easier since it stays upright.

We like to ride together along the pathways both locally and when away on holiday, so this is an investment in holiday activities.   I have ridden it.  It takes some getting used to after a bike, but this is just a matter of familiarity.   We'll be having little sorties locally in preparation for longer trips as confidence builds. 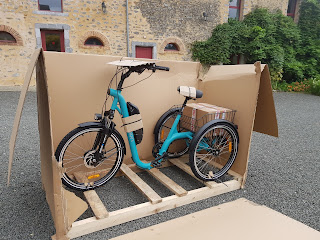 It reminds me I need to get out on my bicycle as well as walking around my local are. The basket is perfect for a picnic :-)

Next step electric motorbike with sidecar?

Chrie - I really enjoy riding my bike, I need to use it more for routine travel like when I was a teenager.